Logging scars landscapes, destroys habitats and is a major contributor to climate change. Here's how old Android smartphones—that might otherwise end up in a landfill— are being used to stop illegal logging and curb climate change impacts. 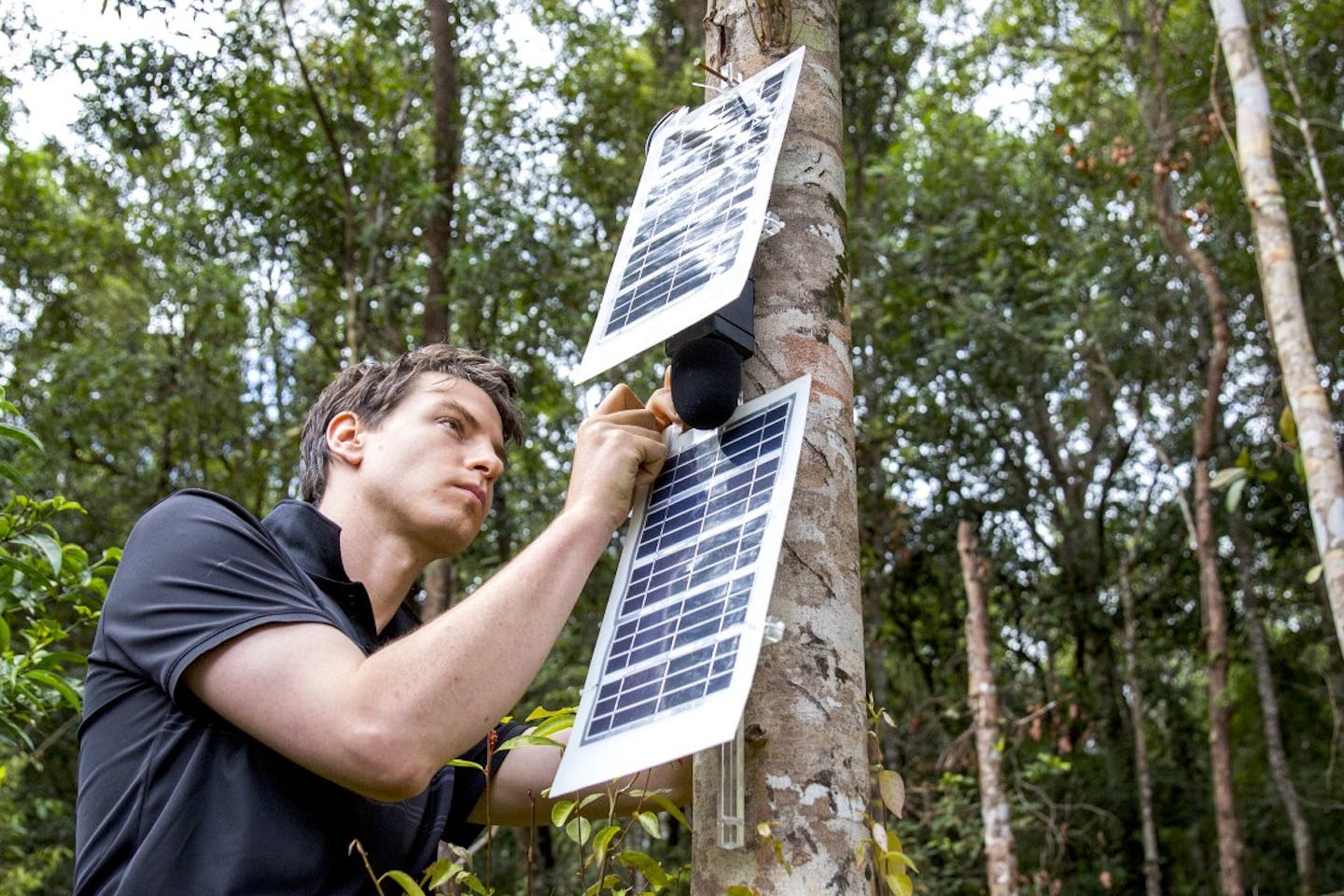 On a 2011 hike through the Indonesian rainforest, Topher White stumbled across a rogue logger cutting down a tree. The man was working just a short distance from the ranger station, but the din of chirping birds and buzzing insects obscured the sound of his chainsaw, keeping him hidden in plain sight.

This gave White an idea. The San Francisco-based engineer dreamt of a device that could listen for chainsaws and report their whereabouts to park authorities.

White, now 35, learned that parts of the rainforest boast remarkable mobile phone service. Cell towers abound, even where roads and power lines are scarce. Locals can make calls and send texts from the outskirts of the forests, where illicit loggers do their work.

On a subsequent trip to Indonesia, White installed a handful of cell phones around a gibbon reserve. The phones would notify park rangers when they heard the putter of chainsaws. Shortly after setting up the system, White received an email notification from one of his phones. He told the rangers, who followed the faint sound of a chainsaw through the woods. They caught a band of loggers in flagrante.

“In most cases, loggers and other offenders are operating under the assumption that they will not be detected or caught,” said White. “When they are, it greatly reduces the incentive to take the risks.”

Each cell phone is protected by a plastic case and powered by a small solar array. A highly sensitive microphone records the sounds of the rainforest, which is sent to the cloud to be analysed. When it hears a chainsaw, it sends a text or email to authorities.

While experts have called for the use of drones and satellites to monitor illegal logging, these technologies generally don’t allow authorities to respond in real time. White’s listening devices notify rangers instantaneously and point them to the scene of the crime.

His technology has been a boon to conservation efforts. Logging scars landscapes, destroys habitats and is a major contributor to climate change. Trees scrub carbon from the skies and store it in their leaves and branches. When loggers cut down a tree, they eliminate a valuable carbon sink. Over time, that can add up. Deforestation contributes more to climate change than every car and truck on Earth. Illegal logging accounts for as much as 90 per cent of tropical deforestation.

“Illegal loggers usually target specific high-value tree species within the interior, cutting wide dirt roads into the forest in order to extract the logs by truck,” said White. “These roads then open the otherwise impassible woods to further, even more destructive exploitation, such as settlement, poaching, and eventually burning and clearing the forest for agriculture.”

White now heads Rainforest Connection, a nonprofit that turns donated Android smartphones into forest sentries. Americans toss out hundreds of millions of cell phones each year. White is repurposing phones that might otherwise end up in a landfill.

One phone can cover almost one square mile of forest, representing 15,000 tons of stored carbon dioxide, according to White — an amount equal to the yearly of emissions of 3,000 cars. White has deployed nearly 100 listening devices to forests in Indonesia, Cameroon, Romania, Brazil, Ecuador, Peru, Nicaragua and Bolivia. And he has raised thousands of dollars for his project on Kickstarter — with the help of an endorsement from aging rock star Neil Young.

Now, White is adapting his technology to go after poachers, building devices that listen for gunshots and boat engines as well as chainsaws. He’s deployed souped up smartphones to forests in Bolivia, where authorities are working to protect a dwindling population of jaguars.

Poachers are slaughtering the animals for their teeth, which are used by traditional Chinese healers to treat rheumatism, among other ailments. White’s phones will alert park rangers when they hear poachers.

White isn’t the only activist using phones to guard nature. Experts have called for equipping indigenous people with cell phones to monitor deforestation. Communities can use cameras to film illegal logging, GPS technology to note the whereabouts of loggers, and phones to notify authorities.

The New York-based nonprofit WITNESS trains people to use video cameras, namely smartphones, to monitor crimes. That could mean police brutality, human trafficking or illegal logging. WITNESS, along with a coalition of environmental and human right groups, recently launched a campaign to fight deforestation in the Amazon. They are distributing drones, cell phones and satellites to indigenous people to document illegal logging.

“Now more than ever, communities are using video and cell phones to document, expose and fight environmental crimes like illegal logging,” said Priscila Néri, a senior program manager at WITNESS. “The more evidence there is, the harder it is for these crimes to be denied, ignored or forgotten.”

Indigenous communities from Indonesia to Guyana are using smartphones to stop illicit loggers. Affordable phones with video cameras and GPS technology have democratised monitoring. Now, anyone with an Android can shine a light on wrongdoing — activists like White and Néri are just making it easier.

“If you can show up in real time and stop people, it’s enough of a deterrent [that] they won’t come back,” White said in a 2014 TED Talk. Using cell phones to monitor illegal logging, he added, “might just be the cheapest, fastest way to fight climate change.”