After weeks of coming under fire from environmental campaigner Greenpeace, banking giant Santander announced that it will no longer fund the operations of deforestation-linked pulp and paper company APRIL.

In a statement to customers, which Greenpeace shared with Eco-Business, the bank said that “based on further internal analysis, Banco Santander has decided to not renew the current funding to APRIL and will not be extending further funding at this stage.”

“Any future loans will be conditional on APRIL implementing new sustainability measures which address its involvement with deforestation,” it added.

The announcement came after weeks of campaigning by Greenpeace UK, who in early February started singling out the bank for loaning APRIL tens of millions of pounds, and also acting as a broker for other banks to lend APRIL as much as £400 million (S$841 million) to finance its operations.

APRIL, which belongs to the Indonesian-owned Royal Golden Eagle Group, is a pulp and paper giant that for many years has been accused of fuelling deforestation in Indonesia through its operations, as have other paper and palm oil companies in the industry.

Many of these firms, including APRIL, have responded to these criticisms with a slew of sustainability policies and zero-deforestation pledges in recent years, although the timeline and degree of these promises varies significantly.

A few days after the Greenpeace campaign launched, Santander initially responded with a decision to monitor the company’s progress and response to an independent environmental audit carried out in August last year by APRIL’s independent Stakeholder Advisory Committee (SAC) and consultancy KPMG.

Greenpeace UK in turn launched a petition against Santander, calling on the public to “tell Santander to stop financing extinction”. 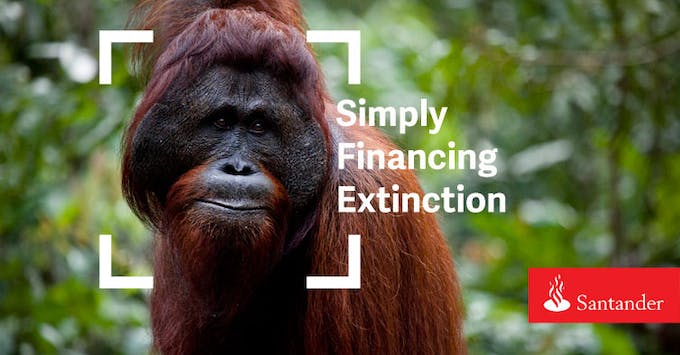 The petition has collected close to 166,000 signatures to date, and the bank’s social media page also received numerous posts criticising its link to APRIL.

When asked by Eco-Business, APRIL declined to comment on Santander’s move, saying that it “does not comment publicly on commercial relationships”.

The company has long been the target of criticism by Greenpeace and other environmental groups for its operations in Indonesia. Critics say the company is clearing ecologically important and carbon-rich rainforest for timber and to build plantations.

APRIL sought to address these claims through its Sustainable Forest Management Policy (SFMP), announced  January last year, which holds the company and its suppliers to sourcing fibre only from forest which does not have a high conservation value, and using only plantation fibre by the end of 2019, among other commitments.

However, the SFMP has been criticised by Greenpeace as allowing APRIL to use rainforest fibre for several more years, and as one that is weakly enforced among its suppliers.

Greenpeace confirmed to Eco-Business that it would meet with the bank on Thursday in London and that it would ask Santander for specific commitments to follow up on their decision to stop financing to APRIL.

However, Santander is not the only bank funding APRIL’s work in Indonesia, nor is it the largest. Analysis by BankTrack, a global network of civil society organisations monitoring the operations and investments of banks, showed that APRIL’s top two sources of funding are the Chinese Development Bank and Bank of China.

The company has loan deals with a total of 22 banks, revealed BankTrack, including Switzerland’s Credit Suisse and Dutch ABN Amro. 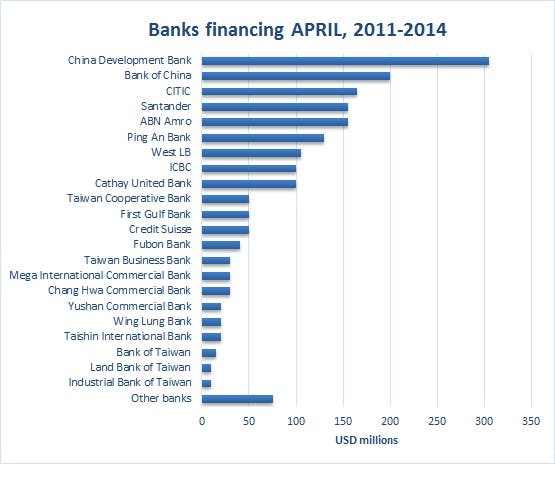 Although Santander is not the only nor biggest bank financing APRIL, Greenpeace UK forests campaigner Richard George pointed out this is a significant development because “it’s a clear message that if APRIL continues clearing rainforest, we can and will affect its access to international markets and financial services”.

“APRIL will always claim to be able to get the money elsewhere, but the cost of doing so will go up each time another customer or financier walks away,” he added.

Even as Greenpeace celebrated Santander’s move as a victory, “this would never have happened if Santander had a responsible lending policy and followed it”, observed George.

He urged the bank to make its lending policy for the forest sector public, and to eliminate other potentially controversial companies from its client base as well.

BankTrack noted that the Chinese banks funding APRIL did not respond to queries about how they complied with green credit guidelines from China’s banking regulators. It also reported on its site that ABN Amro and Credit Suisse, which both have publicly available policies on forest issues, have both so far decided not to divest from APRIL.

Today’s announcement from Santander sends a clear message to APRIL that its deforestation is unacceptable. It puts enormous pressure on other international banks with financial links to APRIL, including Credit Suisse and ABN Amro, to make similar commitments.

As part of its campaign, Greenpeace on Monday also released footage from an ongoing investigation of APRIL’s operations in Indonesia’s Kalimantan, which it claims depicts “APRIL’s bulldozers systematically destroying ancient rainforest.”

“APRIL needs to immediately adopt a zero deforestation policy, as has been done by its competitor APP, and also by fellow Royal Golden Eagle group palm oil companies,” said Greenpeace

APRIL rejected this accusation. A spokesperson for the company told Eco-Business that the footage is of one of APRIL’s suppliers, who are “operating legally on government-licensed plantation forestry area and in compliance with laws and regulations and in accordance with APRIL’s Sustainable Forest Management Policy (SFMP)”.

The spokesperson added that the wood that is sourced by its suppliers from degraded secondary forest land that does not have a High Conservation Value (HCV), and that the cleared area will be converted to a plantation.

APRIL’s supplier’s concessions in Kalimantan are on forest land that is degraded to varying degrees and are not undisturbed rainforest, he said, adding that in North Kalimantan, the concessions licensed to APRIL suppliers have undergone an independent HCV assessment and peer-reviewed by members of the HCV Resource Network .

This is a member group of organisations - including Greenpeace - that ensures the consistent application of the High Conservation Value approach.

APRIL also rebutted Greenpeace’s accusation that it is the greatest threat to Indonesia’s rainforests by stating that its total concession areas comprise just 0.4 per cent of Indonesia’s forests.

Half of APRIL’s concession areas have been developed as plantation forests, while an additional 250,000 hectares are conserved and protected. It is also restoring a further 40,000 hectares of previously degraded land.

The company acknowledged that it had more work to do on areas identified in the audit carried out by its internal committee and KPMG. While the audit commended APRIL’s commitment to match its plantation areas on a ‘one-to-one’ basis with conservation areas, it also identified problem areas, such as accelerating the transition to using only plantation fibre before 2019, and the need to develop a plan to preserve or restore areas of natural forest in areas where it operates.

But it also “stands by its progress towards its sustainability commitments” in areas such as embarking on an independent verification process, improving the livelihoods of people living in its areas of operations, and acquiring land for ecosystem restoration, said the company on its site.