Urban planning is inevitably a complex process which involves reconciling land use guidelines, building construction rules, and aesthetic considerations into every decision.

In Singapore, the urban planner’s role is complicated by the city-state’s high population density and the need to accommodate commercial, residential, recreational, and industrial activities needs into a compact 716 square kilometres.

But now, urban development in Singapore will be faster and easier with the adoption a new 3D modelling tool. The country’s Urban Redevelopment Authority (URA) announced on Tuesday that together with GIS firm Esri, they have developed a new planning tool which will allow planners to programme Singapore’s various land use laws into the software itself.

URA said that its planners can now customise Esri’s CityEngine platform, which transforms two-dimensional town planning data into interactive 3D models, by entering data about the country’s planning and urban design rules into the software.

Speaking to an audience of over 15,000 GIS professionals at Esri’s International User Conference in San Diego, Victor Chua, senior system analyst at URA, shared that this would increase the efficiency of URA’s work.

Chua noted that “urban planning is a complicated and iterative process because it requires the ability to quickly simulate and evaluate multiple scenarios which conform to planning guidelines”.

He added that this typically takes days, but with CityEngine, “we have translated the various complicated guidelines and intents into procedural rules, allowing our staff to quickly explore multiple scenarios, evaluate the metrics, and perform special analytics of future impacts”.

Eugene Lau, executive architect at URA, demonstrated how CityEngine was being used to oversee the development of Singapore’s Jurong Lake District, the island’s biggest commercial development outside the city centre.

As one of the world’s fastest growing cities, it is important that Singapore leverages smart technologies to ensure ongoing developments meet the needs of citizens, now and in the future.

Lau showcased the software’s ability to factor in the different rules that were applicable to each land use type. For example, commercial and residential buildings faced different height limits. They also had to be located at different distances from roads. CityEngine could apply these rules in a just a few clicks to provide a quick yet realistic simulation of what the Jurong Lake district could look like.

Lau shared that the CityEngine platform could also factor in design and aesthetic considerations such as access to greenery or preserving views. He said that a key concern in constructing buildings near Jurong Lake was that iconic landmarks such as a pair of Chinese pagodas overlooking Jurong Lake should remain visible when viewed from the train station. The software could easily address this aesthetic concern by allowing planners to programme in “corridors of visibility”, or linear zones along which development would be avoided. 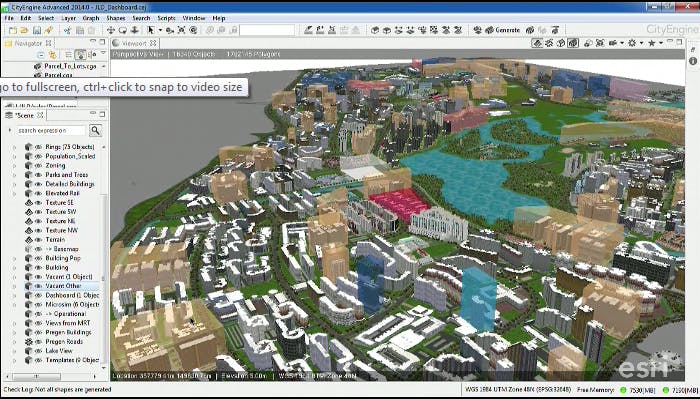 Esri’s City Engine tool is being used by URA to plan the development of the Jurong Lake District effectively and sustainably.

Data from CityEngine could even be exported to other planning tools to predict how development could affect traffic flows or population density, Lau said.

Goh Siow Chong, director of information systems and applications, URA, said that the CityEngine software would enable the agency to “better plan for a more liveable and inclusive environment”.

“Our collaboration with Esri Inc and Esri Singapore is a fruitful experience”, he added.

“As one of the world’s fastest growing cities, it is important that Singapore leverages smart technologies to ensure ongoing developments meet the needs of citizens, now and in the future”, he said. “URA’s approach to using 3D GIS technology is incredibly progressive, and serves as a benchmark and inspiration for other countries around the world”.

The collaboration between URA and Esri is the outcome of a two-year Memorandum of Understanding that was inked in November 2013. The organisations will continue to work together to develop more Singapore-specific rules for CityEngine and enhance the 3D models, they said.