Why remote Antarctica is so important in a warming world

Recent research is casting new light on the importance of the southernmost continent, overturning centuries of misunderstanding and highlighting the role of Antarctica in how our planet works and the role it may play in a warmer world.

Ever since the ancient Greeks speculated a continent must exist in the south polar regions to balance those in the north, Antarctica has been popularly described as remote and extreme. Over the past two centuries, these factors have combined to create, in the human psyche, an almost mythical land – an idea reinforced by tales of heroism and adventure from the Edwardian golden age of “heroic exploration” and pioneers such as Robert Falcon Scott, Roald Amundsen and Ernest Shackleton.

Recent research, however, is casting new light on the importance of the southernmost continent, overturning centuries of misunderstanding and highlighting the role of Antarctica in how our planet works and the role it may play in a future, warmer world.

Where, when, and how quickly they might melt is a major focus of research. No one is suggesting all the ice sheets will melt over the next century but, given their size, even small losses could have global repercussions. Possible scenarios are deeply concerning: in addition to rising sea levels, meltwater would slow down the world’s ocean circulation, while shifting wind belts may affect the climate in the southern hemisphere.

What was once thought to be a largely unchanging mass of snow and ice is anything but. Antarctica holds a staggering amount of water. The three ice sheets that cover the continent contain around 70 per cent of our planet’s fresh water, all of which we now know to be vulnerable to warming air and oceans. If all the ice sheets were to melt, Antarctica would raise global sea levels by at least 56m.

In 2014, NASA reported that several major Antarctic ice streams, which hold enough water to trigger the equivalent of a one-and-a-half metre sea level rise, are now irreversibly in retreat. With more than 150m people exposed to the threat of sea level rise and sea levels now rising at a faster rate globally than any time in the past 3,000 years, these are sobering statistics for island nations and coastal cities worldwide.

An immediate and acute threat

Recent storm surges following hurricanes have demonstrated that rising sea levels are a future threat for densely populated regions such as Florida and New York. Meanwhile the threat for low-lying islands in areas such as the Pacific is immediate and acute. 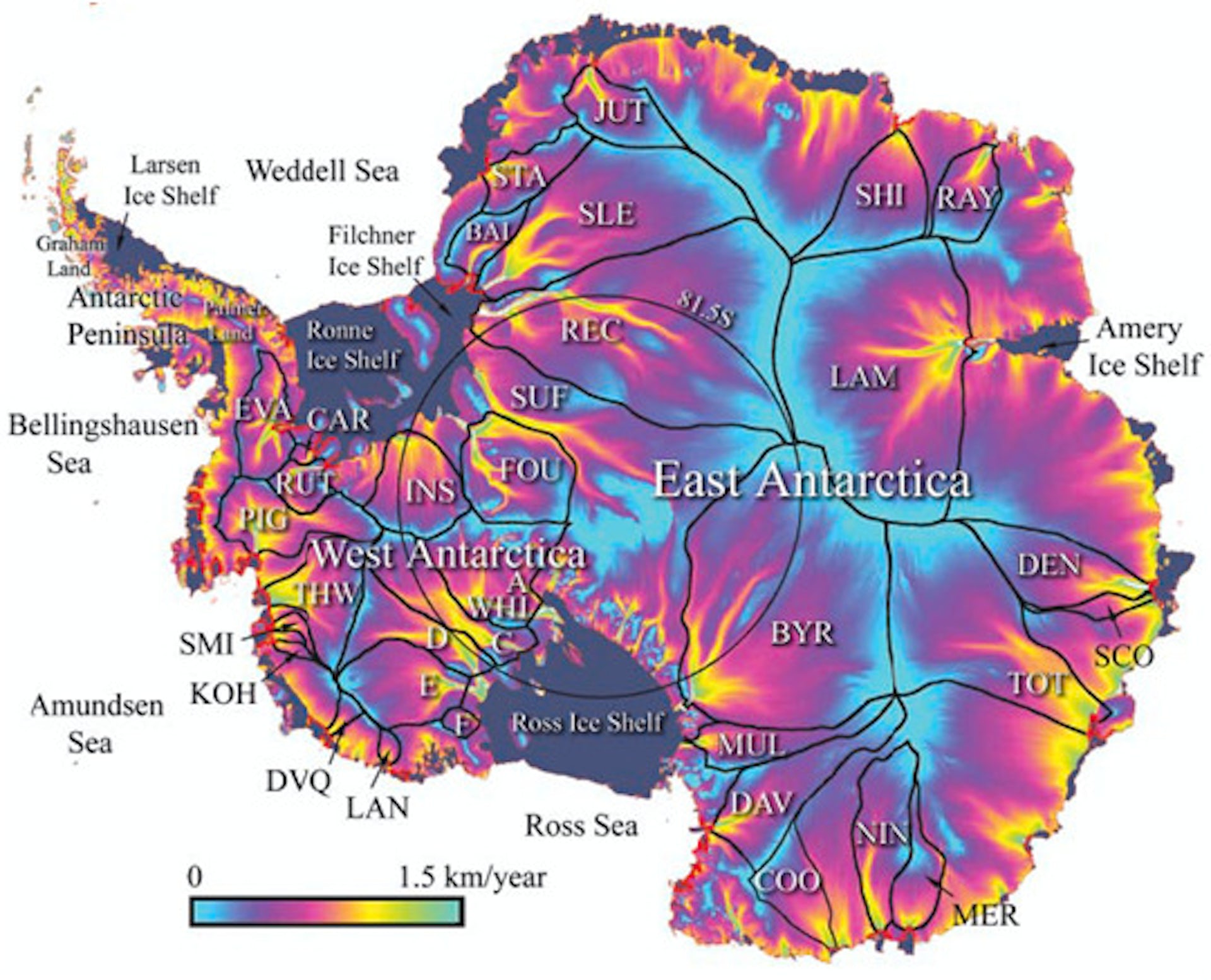 Much of the continent’s ice is slowly sliding towards the sea. Image: R Bindschadler / wiki

Multiple factors mean that the vulnerability to global sea level rise is geographically variable and unequal, while there are also regional differences in the extremity of sea level rise itself. At present, the consensus of the IPPC 2013 report suggests a rise of between 40 and 80cm over the next century, with Antarctica only contributing around 5cm of this. Recent projections, however, suggest that Antarctic contributions may be up to ten times higher.

Studies also suggest that in a world 1.5-2°C warmer than today we will be locked into millennia of irreversible sea level rise, due to the slow response time of the Antarctic ice sheets to atmospheric and ocean warming.

We may already be living in such a world. Recent evidence shows global temperatures are close to 1.5°C warmer than pre-industrial times and, after the COP23 meeting in Bonn in November, it is apparent that keeping temperature rise within 2°C is unlikely.

So we now need to reconsider future sea level projections given the potential global impact from Antarctica. Given that 93 per cent of the heat from anthropogenic global warming has gone into the ocean, and these warming ocean waters are now meeting the floating margins of the Antarctic ice sheet, the potential for rapid ice sheet melt in a 2°C world is high.

In polar regions, surface temperatures are projected to rise twice as fast as the global average, due to a phenomenon known as polar amplification. However, there is still hope to avoid this sword of Damocles, as studies suggest that a major reduction in greenhouse gases over the next decade would mean that irreversible sea level rise could be avoided.

It is therefore crucial to reduce CO₂ levels now for the benefit of future generations, or adapt to a world in which more of our shorelines are significantly redrawn.

This is both a scientific and societal issue. We have choices: technological innovations are providing new ways to reduce CO₂ emissions, and offer the reality of a low-carbon future. This may help minimise sea level rise from Antarctica and make mitigation a viable possibility.

Given what rising sea levels could mean for human societies across the world, we must maintain our longstanding view of Antarctica as the most remote and isolated continent.