The Sixth Mass Extinction is happening now, and it doesn’t look good for us

Species are going extinct at an unusually high rate. Our efforts now will prevent a future too ghastly to contemplate.

Mounting evidence is pointing to the world having entered a sixth mass extinction. If the current rate of extinction continues we could lose most species by 2200. The implication for human health and wellbeing is dire, but not inevitable.

In the timeline of fossil evidence going right back to the first inkling of any life on Earth — over 3.5 billion years ago — almost 99 percent of all species that have ever existed are now extinct. That means that as species evolve over time — a process known as ‘speciation’ — they replace other species that go extinct.

Extinctions and speciations do not happen at uniform rates through time; instead, they tend to occur in large pulses interspersed by long periods of relative stability. These extinction pulses are what scientists refer to as mass extinction events.

The Cambrian explosion was a burst of speciation some 540 million years ago. Since then, at least five mass extinction events have been identified in the fossil record (and probably scores of smaller ones). Arguably the most infamous of these was when a giant asteroid smashed into Earth about 66 million years ago in what is now the Gulf of Mexico. The collision vapourised species immediately within the blast zone. Later, species were killed off by climate change arising from pulverised particulates suspended in the atmosphere, as well as intense volcano activity stimulated by the buckling of the Earth’s crust from the asteroid’s impact. Together, about 76 percent of all species around at the time went extinct, of which the disappearance of the dinosaurs is most well-known. But dinosaurs didn’t disappear altogether — the survivors just evolved into birds.

To be classified as a mass extinction, at least 75 percent of all the species on Earth must go extinct within a ‘short’ geological period of less than 2.8 million years. That timeframe seems long to us because modern humans have only existed for about 200,000 years so far.

As a species, humans have been implicated in smaller extinction events going back to the late Pleistocene (around 50,000 years ago) to the early Holocene (around 12,000 years ago) when most of the ‘megafauna’, such as woolly mammoths, giant sloths, diprotodons, and cave bears, disappeared from nearly every continent over a few thousand years.

Much later, the expansion of European colonists throughout the world from about the 14th Century precipitated an extinction cascade first on islands, and then to areas of continental mainland as the drive to exploit natural resources accelerated. Over the last 500 hundred years, there have been more than 700 documented extinctions of vertebrates and 600 plant species. These extinctions come nowhere near the 75 percent threshold to include the modern era among the previous mass-extinction events.

But those are just the extinctions humans have recorded. In fact, many species go extinct before they are even discovered — perhaps as many as 25 percent of total extinctions are never noticed by humans. Even accounting for undetected extinctions, the modern era still cannot be classified as a mass extinction event.

But it’s not the total number of extinctions we should focus on; rather, it’s the extinction rate. If past mass extinctions took nearly three million years to ensue, then we should instead examine how many species go extinct per unit of time relative to the ‘background’ extinction rate that occurs between mass-extinction events.

According to the fossil record, the average ‘lifespan’ of a species is around one million years, which equates to a background rate of about 0.1–2.0 extinctions per million ‘species-years’. This makes the number of observed extinctions in the modern era 10 to 10,000 times higher than the background rate. Even the most conservative estimates that ignore undetected extinctions firmly place the modern era well within the expected range to qualify as a mass extinction.

An optimist might contend that surely the rate of loss will decline with time, such that we’d be unlikely to meet the 75 percent threshold. However, the outlook is not at all rosy. The devastation wrought to date means the extinction rate is only likely to accelerate.

Most of the damage to the Earth’s life-support system has happened over the last century. The global human population has tripled since 1950, and there are now approximately one million species threatened with imminent extinction due to massive population declines, representing about 10–15 percent of all complex life on Earth. Since the start of agriculture around 11,000 years ago, the total amount of vegetation on Earth has halved. Less than 15 percent of all wetlands recorded 300 years ago are still present today, and more than two-thirds of the world’s oceans are compromised to some extent by human activity. Not to mention climate change. Recent evidence suggests global warming causes up to ten times more extinctions than we might expect by looking only at a species’ upper temperature limit. In fact, when we take the relationships between species into account — such as predators depending on their prey, parasites depending on their hosts, or flowering plants depending on their pollinators — near-future extinctions are expected to sky-rocket. 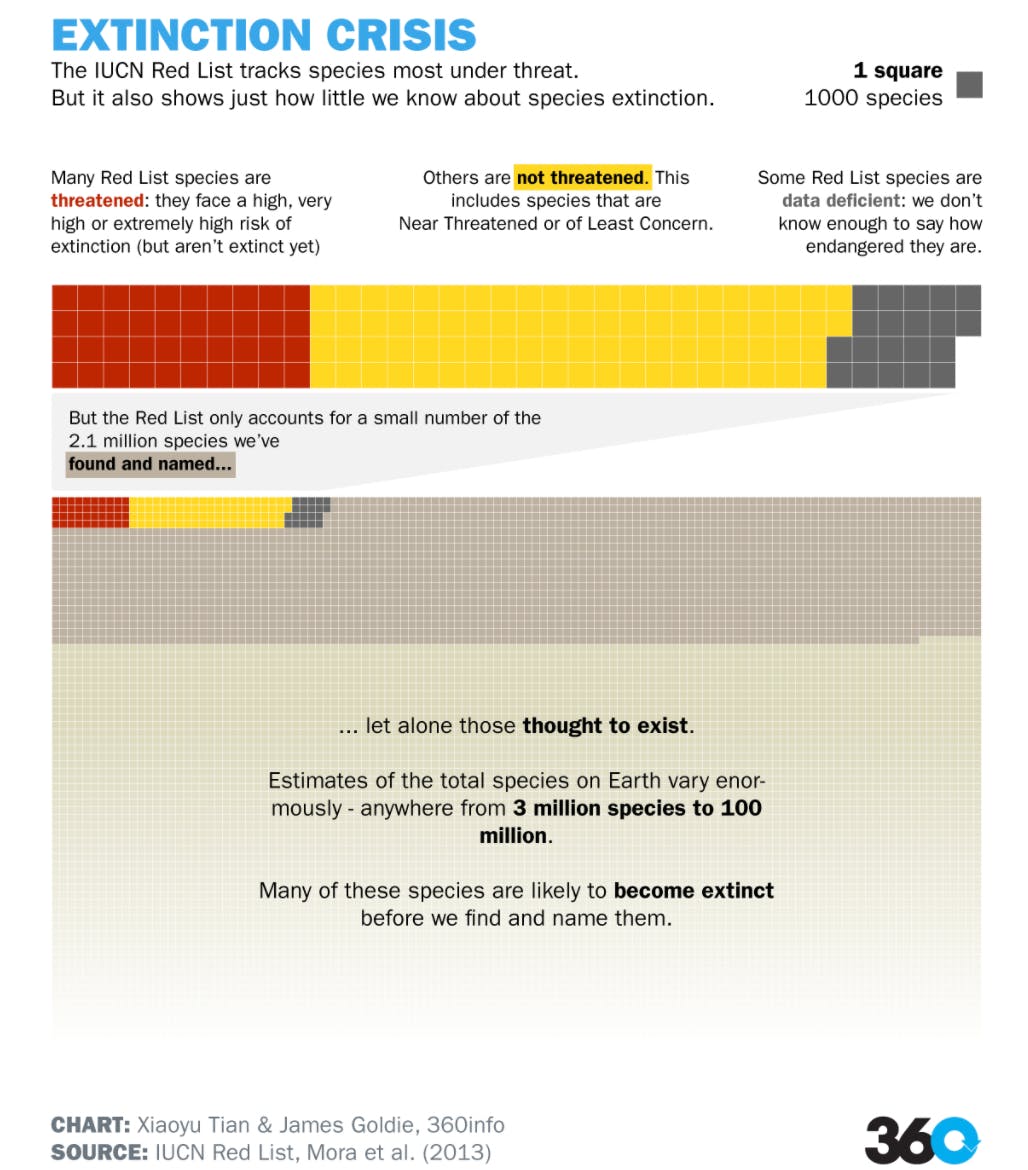 What we know — and don’t know — about extinctions. Source: 360Info

The IUCN Red List tracks species most under threat. But it also shows just how little we know about species extinction.

A truly indifferent person might also claim that as long as the species that provide resources for modern societies survive, there’s no reason to consider extinction a problem. The evidence suggests otherwise.

Species loss also erodes the services biodiversity provides us. These include reduced carbon sequestration that exacerbates climate change, reduced pollination and increased soil degradation that compromise our food production, poorer water and air quality, more frequent and intense flooding and fires, and poorer human health. Even human diseases like HIV/AIDS, Ebola, and COVID-19 are the result of our collective indifference to the integrity of natural ecosystems.

You could be forgiven for thinking that in the presence of overwhelming scientific evidence supporting the necessity to change our course, human societies and their leaders would prioritise damage control. In fact, the opposite is occurring.

However, the grim outlook does not justify inaction. On the contrary, we could potentially limit the damage if societies around the globe embraced certain fundamental, yet achievable, changes.

We could abolish the goal of perpetual economic growth, and force companies to restore the environment using established mechanisms such as carbon pricing. We could limit undue corporate influence on political decision-making, and end corporate lobbying of politicians. Educating and empowering women, including providing greater self-determination in family planning, would help stem environmental destruction.

With a little effort and longer-term planning, we could make our future just that little bit less ghastly.

Corey Bradshaw is the Matthew Flinders Professor of Global Ecology at Flinders University, Adelaide. This research was funded by the Australian Research Council.