The Food Tower: Looking up to solve the global food crisis

Surbana Jurong principal architect Owen Wee presents a novel concept, the Food Tower, which can solve several urban challenges for Singapore at once: overcrowding, food security, and the ever-present need for community cohesion.

With the global population rising rapidly and expected to reach 9.7 billion by 2050, governments around the world are increasingly asking the simple but critical question: how will we feed ourselves in future? A radical new vertical farming model called the Food Tower could provide an answer.

Food, it seems, is all around us. In our homes; on our televisions; in our shops; on our streets. Yet, surprising though it may seem given this apparent proliferation, the question of how we continue to feed ourselves in future is set to become one of the biggest challenges facing the developed and developing world.

The combined impact of population growth, climate change and urbanisation, which in 30 years’ time could see some 70 per cent of the global population living in cities, means that we are running out of available space and resources to grow crops in traditional ways.

In short, we need to come up with new ways to farm; new ways to manage food production and delivery; new ways to reduce pressure on resources and sustain our environment and lifestyles.

The food production challenge is already seen in cities such as Singapore. With almost no arable land, Singapore is heavily dependent on food imports and faces a potential food security problem. While past investment has enabled water self-sufficiency to be achieved, the need for a sustainable locally-grown supply of food is now more important than ever.

The built environment designers must now adopt a radically different approach to city planning to include food production within their thinking.

Enter the Food Tower, a radical vertical urban farming concept that could be the innovative solution needed to solve to these challenges. With almost no arable land, Singapore is heavily dependent on food imports and will face a potential, yet undefined, future food security problem.

The Food Tower concept was mooted and tested by Surbana Jurong’s architectural team as a direct response to the growing pressure on sustainability of food production in Singapore.

While Singapore may not have vast land area, it is blessed with an abundance of sunshine and rainfall. The Food Tower concept attempts to maximise this natural potential by by stacking vegetable growing areas in an open, sunlight flooded high rise towers. This way, sunlight can be captured boosting growing yields across the 1 hectare site to some 400 times that of traditional farming.

The Food Tower concept takes a major step forward in large scale urban farming by using aquaponics—that is, where vegetables are grown on towers using the water and nutrients from a system of tanks in which Red Tilapia fish are reared. The vegetable towers are located on “wings” on higher floors that spiral upwards to maximise sunlight exposure; the fish farms are located at the lower floors where there is more shade.

The Food Tower also features a closed loop energy system, with onsite photovoltaics generating power, rainwater harvesting and wetland reed beds to purify and recycle waste water on-site. The wetlands can act as part of a garden for the larger community.

It is estimated that a 100-storey food tower on 1 hectare of land can provide sufficient meat and vegetables for just over 11,000 people per year. 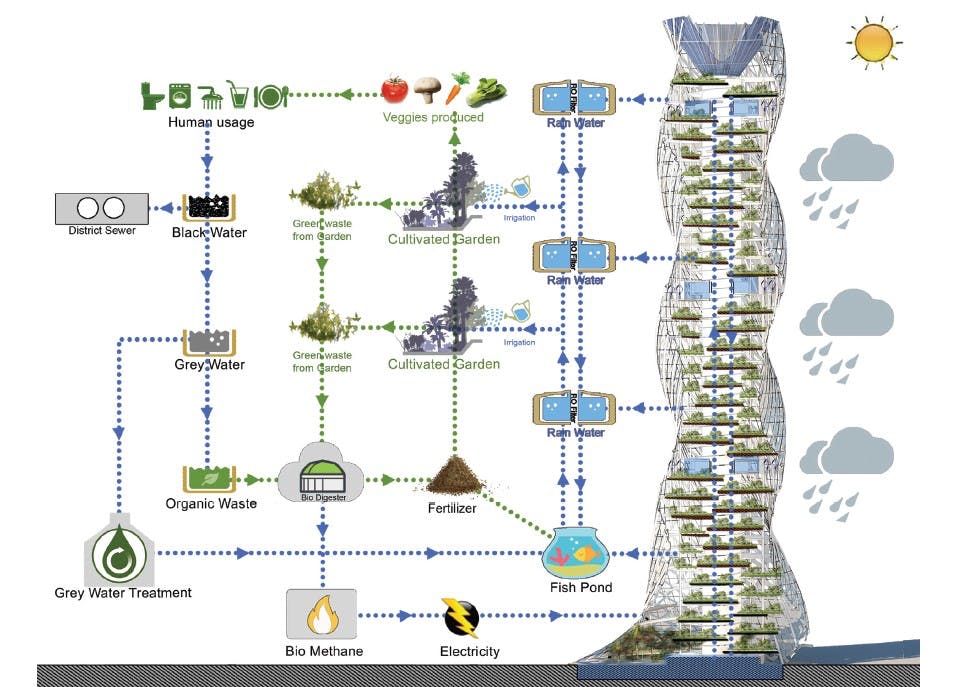 While the technology and design for high-rise farming in cities has been slowly maturing, there are a number of other factors which need to be addressed early so that Singapore can stay ahead of the curve and be ready to capitalise on the technology when it becomes viable.

One of the successful pilots that has been in operation is the first urban rooftop aquaponic farm, located at *SCAPE in the heart of Singapore’s shopping district, provides its fresh produce to nearby establishments.

This starts with the physical planning and zoning of suitable sites for urban farms, in particular, to ensure that the immediate setback of buildings around the site enables sunlight to reach the crops.

Government agencies must be armed with well-researched and clear policies to ensure that this need is well understood and taken into account, and the tenure offered to the farmer or farming community for the land use must take into consideration the efforts put in to develop the farm.

Clearly, despite the predictability of the weather in Singapore, the availability of sunlight varies around and throughout the Tower. This must be matched to different types of crops to maximise yield. Land use zoning could designate that above a certain height, building space be developed as farms while lower floors are used for other commercial and retail purposes.

We need to come up with new ways to farm; new ways to manage food production and delivery; new ways to reduce pressure on resources and sustain our environment and lifestyles.

Crop yield per square meter would also need to be mandated to encourage developers to adopt best technology to maximise the efficiency of land use. For example, natural sunlight could be supplemented by artificial LED growing lights, powered by stored photovoltaic energy from panels on the structure – possibly creating 24-hour-a-day growing conditions in the tower and so maximising growing efficiency.

Creating a sustainable solution also means working with the community. Commercial farming revenue from food towers could be supplemented by sharing space which is not so well-suited for farming with other community and residential facilities.

These might include an environmental research centre, restaurant and a school plus other facilities such as Community Parks and wetlands to boost interaction with the local community.

A new way of farming will need a new breed of farmer; an urban-agriculturist. It is a role that currently does not exist, requiring knowledge of the specific technology and techniques needed to adapt modern intensive farming practice to a high-rise urban environment.

The Food Tower would also need a multitude of new skills to run the urban farm; understanding the internal drainage, water and electrical needs of a modern building, the external environment such as solar effects, winds flows plus the impact of dust and city pollutants on crops.

In the factory environment of a Food Tower, they would need to be thoroughly grounded in managing work flow and production process while also understanding and managing resource use and recycling of water, waste and energy so as to maximise productivity and output.

It is clear that globally, we must look at more sustainable ways of living. This means including food production in future planning policies as we define and design the increasingly urban, increasingly congested cities of the future.

Although the idea sets out to rethink mass food production, it also demonstrates that consumers can be supplied with fresher and safer food with a lower overall carbon footprint. The project has already shown that it has a viable commercial business model but it is also a model that can rejuvenate urban sites, engage the community in various levels and create local jobs.

However, the development of such projects will require major commitment and intervention by governments to cover the substantial start-up cost and to create the necessary governance to allow such high-density food production in urban areas.