As global tourism booms, is it becoming a victim of its own success? Not if it takes these five steps along a sustainable development path, write ADB experts Donghyun Park and Cynthia Castillejos-Petalcorin and SW Associates' Scott Wayne.

By Donghyun Park and Cynthia Castillejos-PetalcorinScott Wayne
May 6, 2019

Tourism is one of the fastest growing industries in the world, and Asia is one of the hottest destinations. Though it generates sizable economic effects, there is a growing recognition that tourism is a double-edged sword. For example, large numbers of tourists can seriously damage the natural and cultural heritage of destinations. However, there are plenty of options available to policymakers to promote sustainable tourism which benefits both visitors and hosts.

Since 2011, global international arrivals have been growing at an average annual rate of 4.8 per cent, adding about 55 million new visitors each year, to reach 1.4 billion in 2018.

Leveraging tourism to promote sustainable development will require a tough balancing act between development and sustainability. Asian countries are up to the challenge and already making some headway. 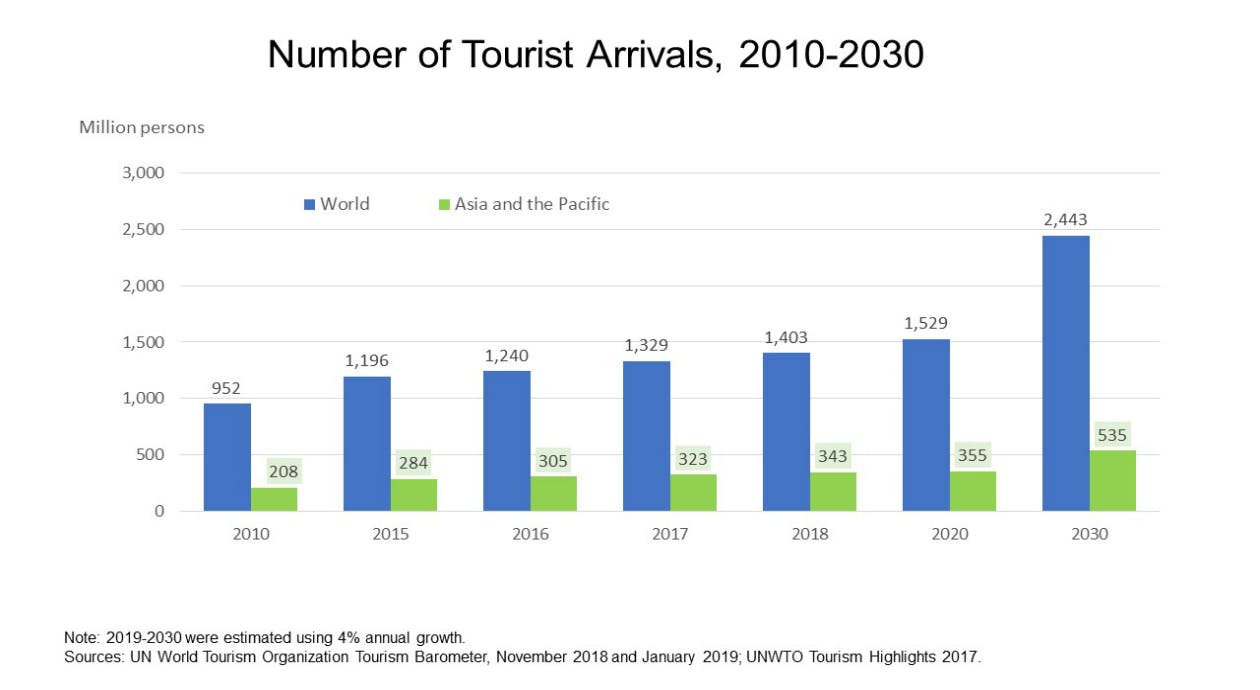 The economic effect of tourism can be measured narrowly—calculating only direct effects such as expenditures on hotels and airlines—or more broadly—including indirect effects such as tourism-related investment. For example, the purchase of new airplanes or construction of hotels. Globally, the direct and total economic impact of tourism amounted to $8.60 trillion and $2.67 trillion in 2018, respectively. In Asia, the corresponding figures were $2.94 trillion and $0.92 trillion.

The corresponding figures for Asia are 78 million and 180 million jobs. Tourism can also contribute to inclusive growth and more balanced national development by bringing investment to remote areas with tourist attractions.

Notwithstanding the huge benefits of tourism, concerns about its sustainability are mounting. In destinations from Iceland to Palau, tourism is proving to be a victim of its own success with too many visitors overwhelming local communities, causing prices, rents and land values to rapidly rise, and threatening natural and cultural heritage. The term overtourism is gaining currency, and the phenomenon is provoking a backlash from local communities. 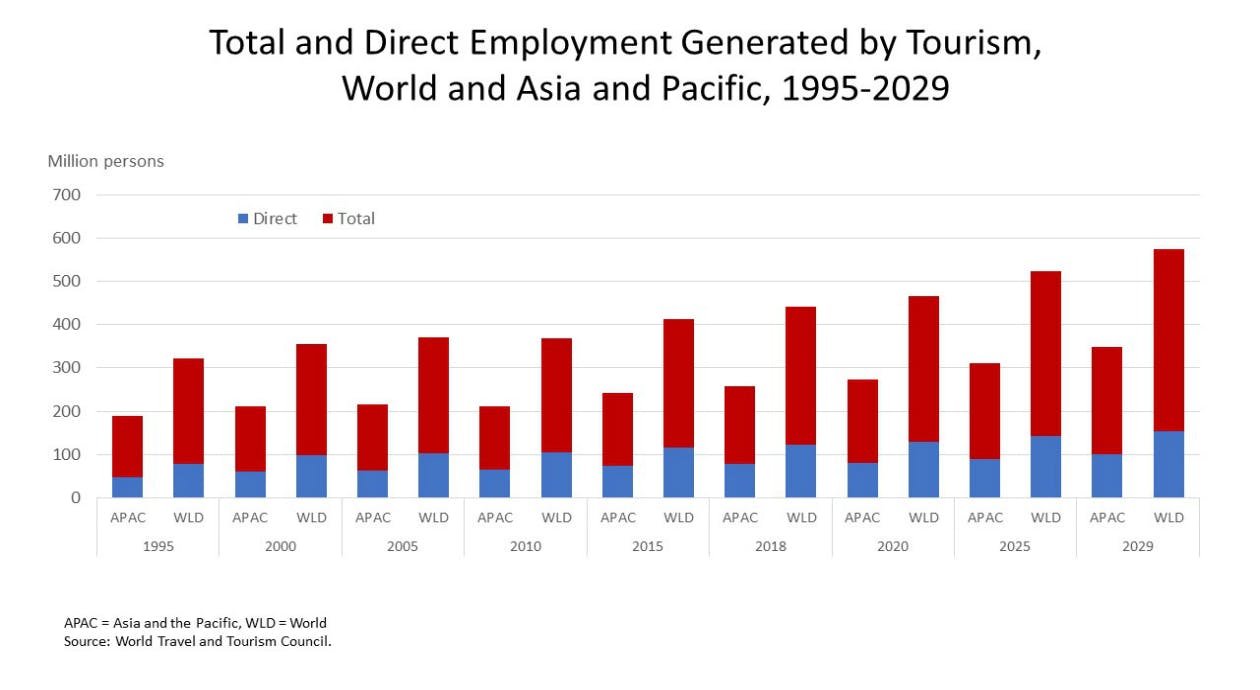 In order to achieve more sustainable tourism, there must be concrete progress in all five areas. This is why a holistic approach is required. Effective governance and policies are required for operationalising each of the five pillars. The challenge lies in ensuring the necessary financial resources and capacity within government agencies for implementation.

Encouragingly, Asian countries are taking action to promote sustainable tourism. For example, in 1996 the Cambodian government set up a dedicated authority to promote and manage the cultural heritage of Angkor Wat, and maximize benefits for communities at and near the sites.

In Fiji, the government imposes a 10 per cent tax on annual gross turnovers of tourism-related businesses to fund climate change mitigation projects. And, the Indian state of Kerala set up a program which trained about 650 residents of poor and vulnerable communities for employment in local hotels.

Fast-growing tourism is here to stay. Leveraging tourism to promote sustainable development will require a tough balancing act between development and sustainability. Asian countries are up to the challenge and already making some headway.

Donghyun Park is Principal Economist, Economic Research and Regional Cooperation Department and Cynthia Castillejos-Petalcorin is Senior Economics Officer, Economic Research and Regional Cooperation Department at ADB. Scott Wayne is the President at SW Associates, an international consulting practice focused on sustainable development through tourism for both public and private sector clients and organisations.

This article was first published by the Asian Development Bank.