Terra Antarctica, as it is also known, has a way of cutting you down to scale and making you ponder your own insignificance, Christine Amour-Levar shares from an all-female expedition to one of the planet's most inhospitable places.

Goaded by a mighty tailwind the massive Ilyushin IL-76 TD aircraft hurtles southwards at a velocity approaching 495 mph (800 km/h). The Drake Passage below sparkles to a far horizon as we make our way westward from Punta Arenas in Chile, to the Antarctic Peninsula and finally to Union Glacier, a private base operated by Antarctic Logistics & Expeditions (ALE), located in the Heritage Range, below the Ellsworth Mountains.

After about four and a half hours in the air, we prepare to land on the Blue Ice Runway, a rare and naturally occurring ice strip as hard as concrete that is solid enough to support the weight of this monstrous Soviet military aircraft. It’s minus 15 degrees Celsius as we get off the plane and take our first steps on Antarctica. 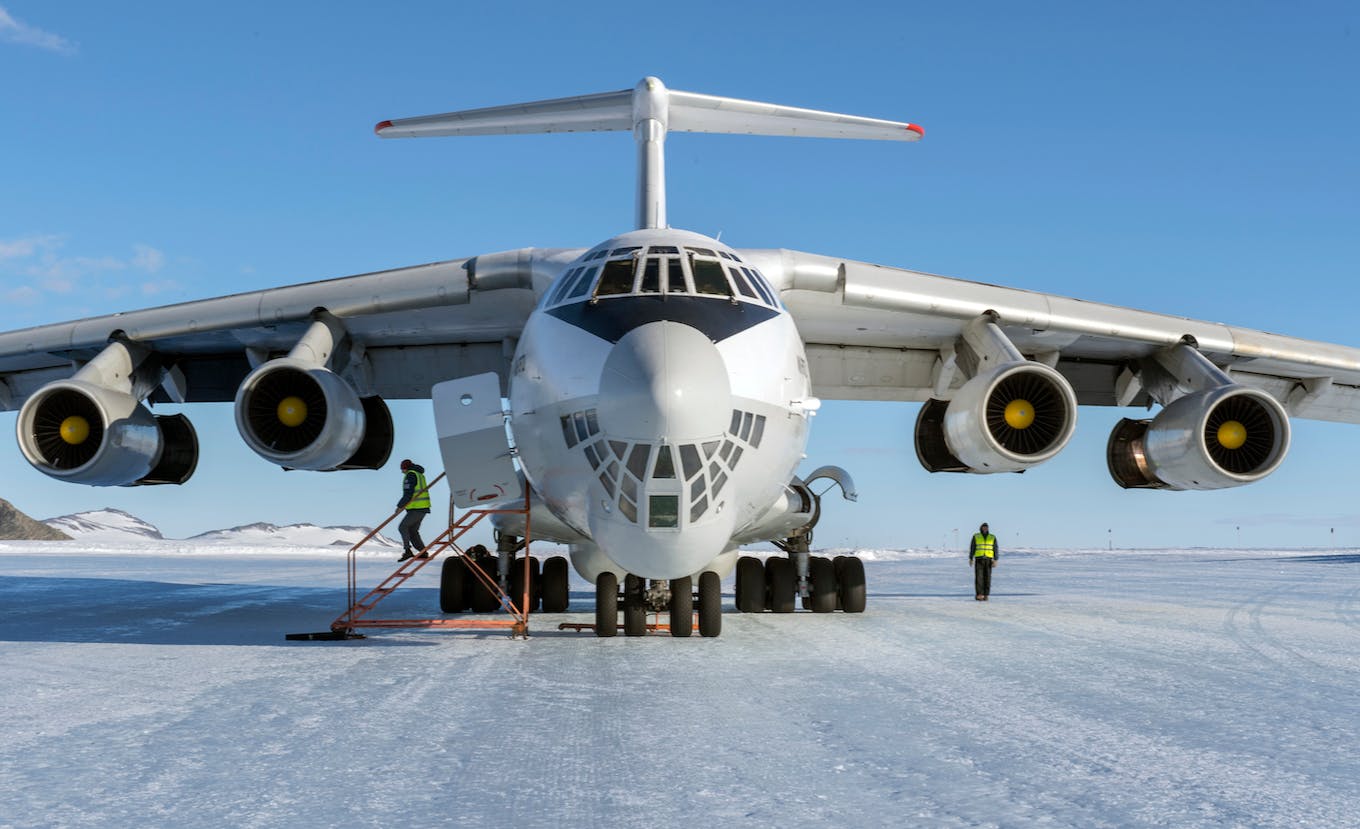 The vast ocean of white unfolding before my eyes is simply magnificent. I look up to see the sun ablaze in the blue polar sky while the fierce wind makes me literally moonwalk on the frozen runway as I try to move from the plane to the four-wheel drive waiting to take us to the main camp.

Man has never permanently inhabited this remote landmass. Accessible only during its warmest months, from November to March, it has no metropolis or village to speak of, no habitat except perhaps the odd expedition shed or research station. It’s all just massive, desolate, glacial emptiness and bone-chilling temperatures that can range anywhere from -10°C to -80°C during the colder months.

Our all-female team arrives at Union Glacier Camp and after a quick tour of the facilities, we get assigned to the dual occupancy “clam” tents. Most of us are based in equatorial Singapore, and it has taken us close to 48 hours to get here. No wonder settling in feels good, and the tents are surprisingly comfortable to live in. 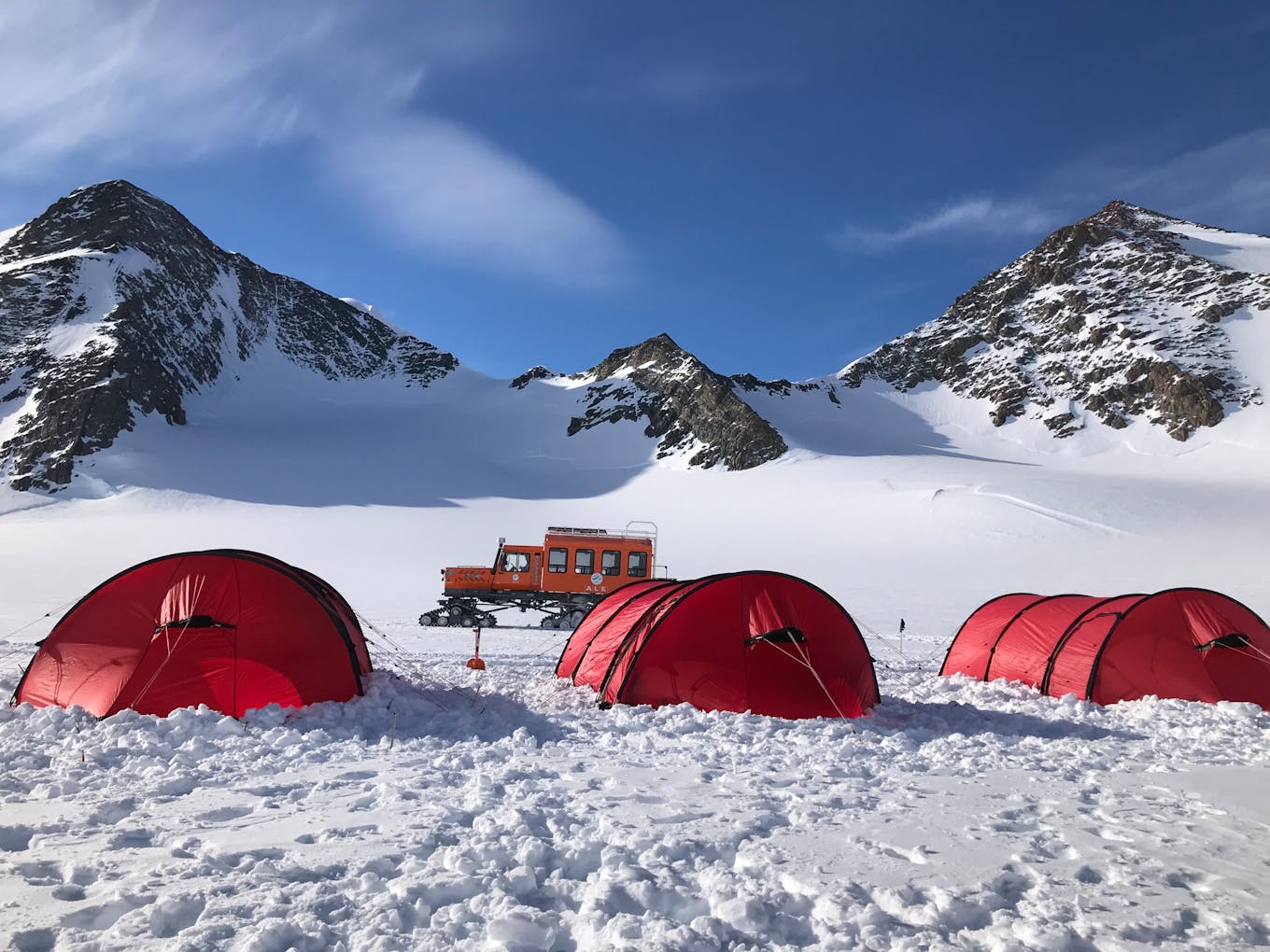 We spend the first few days at Union Glacier brushing up on our climbing skills and getting acclimatised to the Antarctic conditions. The team practices rope work, crevasse rescue, navigation, weather observations, and polar camping skills.

The continent is losing large chunks of ice the size of cities from its coastline as a result of global warming, and when these icebergs melt and increase sea levels, this could have catastrophic consequences for our planet.

We have no doubt that the next few days, as we go further inland to explore unchartered territory, will be nothing short of extraordinary. Our group of six is on a quest for new routes and peaks in the surrounding mountain ranges. Ultimately, we want to use this pioneering challenge to raise awareness for a cause very close to our hearts—the plight of underprivileged women affected by climate change.

We chose Antarctica because it is a powerful symbol of this struggle since it is also fighting for its own survival. In fact, Antarctica, the world’s largest desert, which is 98 percent covered in ice, is melting at an alarming rate. The continent is losing large chunks of ice the size of cities from its coastline as a result of global warming, and when these icebergs melt and increase sea levels, this could have catastrophic consequences for our planet.

After a few days in Union Glacier, we get ready to explore and our team sets out in high spirits with a generous supply of food, our camping gear, and climbing equipment because, depending on how the weather behaves, we may be out there for several days. The climate in Antarctica is extremely volatile and conditions can often change dramatically and very suddenly. So, we hope for the best but plan for the worst. 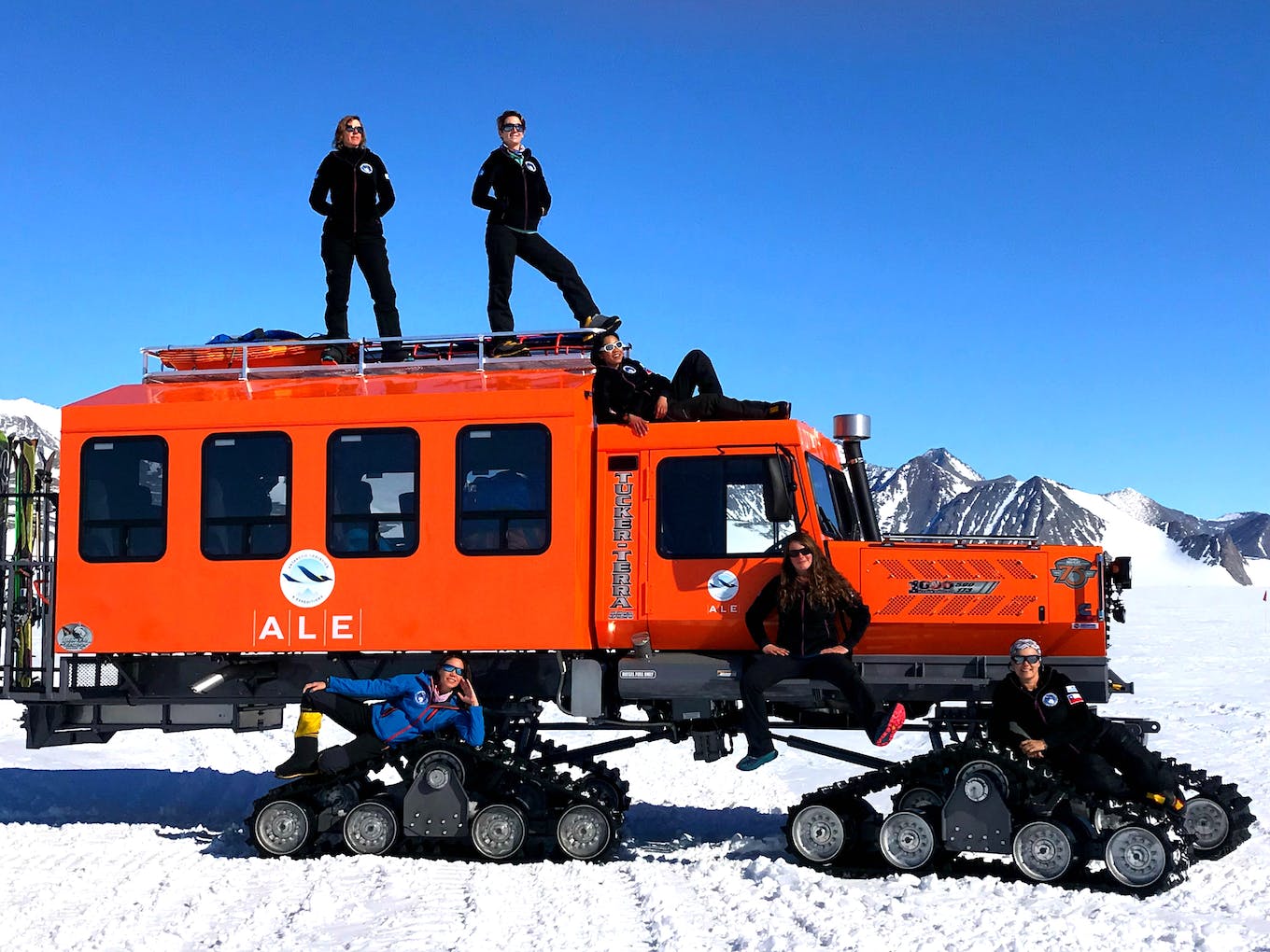 We are blessed with good weather for the most part and therefore our determined group is able to establish several new routes, claim the first female ascent of one peak and the two first ascents of unclimbed mountains. As a result, we have the right to name these two new peaks. The first, a beautiful mountain with incredible ridges is christened ‘Mount Gaia’ in celebration of our NGO’s name ‘HER Planet Earth.’ Gaia is ancient Greek for the Goddess Earth. The second mountain is named Mount Malala in honour of the Nobel Peace prize winner, Malala Yousafzai, who embodies courage and women empowerment in the face of injustice and violence. 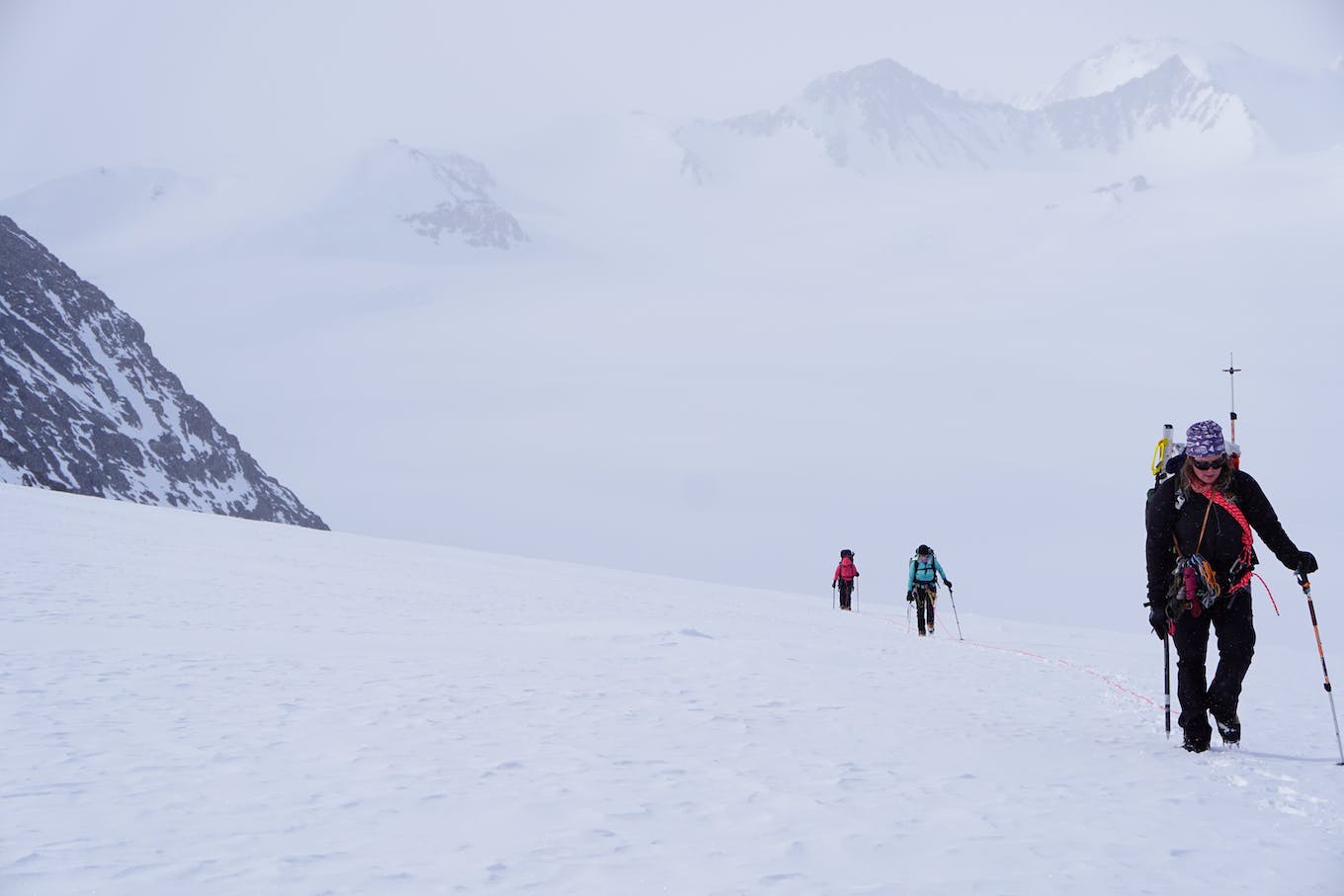 After several days camping and climbing under the 24-hour Antarctic sun, we lose all sense of time and space in this immense white expanse. Our days of climbing are long and draining and we are constantly alert for hidden crevasses on the route. On two occasions, one of us falls partly into a crevasse, but we are roped together at all times in groups of three, 15 meters apart, so no one is lost to the depth of the ice.

We encounter unpredictable weather at times, with low clouds and icy winds causing the temperature to drop to minus 25 degrees Celsius and forcing us to turn around on several occasions. Even when the summit ridge appears so close we think we could almost touch it, we know that distances can seem shorter than they really are in such conditions. And if the weather continues to degrade as we climb higher, it could endanger the whole team, so we do the right thing, we descend back to camp.

On the days the weather holds, and we are able to summit, the sense of achievement and pride is truly indescribable. The team is ecstatic and feels that the spirits of legendary female explorers are cheering us on pushing us forward to new frontiers on our Antarctic sojourn.

Despite the exhaustion, the painful sprains and bruises, the frost nip on our extremities—cold injury due to vasoconstriction—and the fact that on one occasion, part of the team gets stuck on a technical mountain face for close to 24 hours, the whole experience turns out to be unbelievably rewarding. Antarctica, subject to such extreme conditions, has a natural beauty and raw exquisiteness that surpasses all of our expectations.

Our mission accomplished, we finally head back to Union Glacier camp. Ultimately, this vast continent at the very edge of the earth—the last to be discovered by man—does not disappoint. 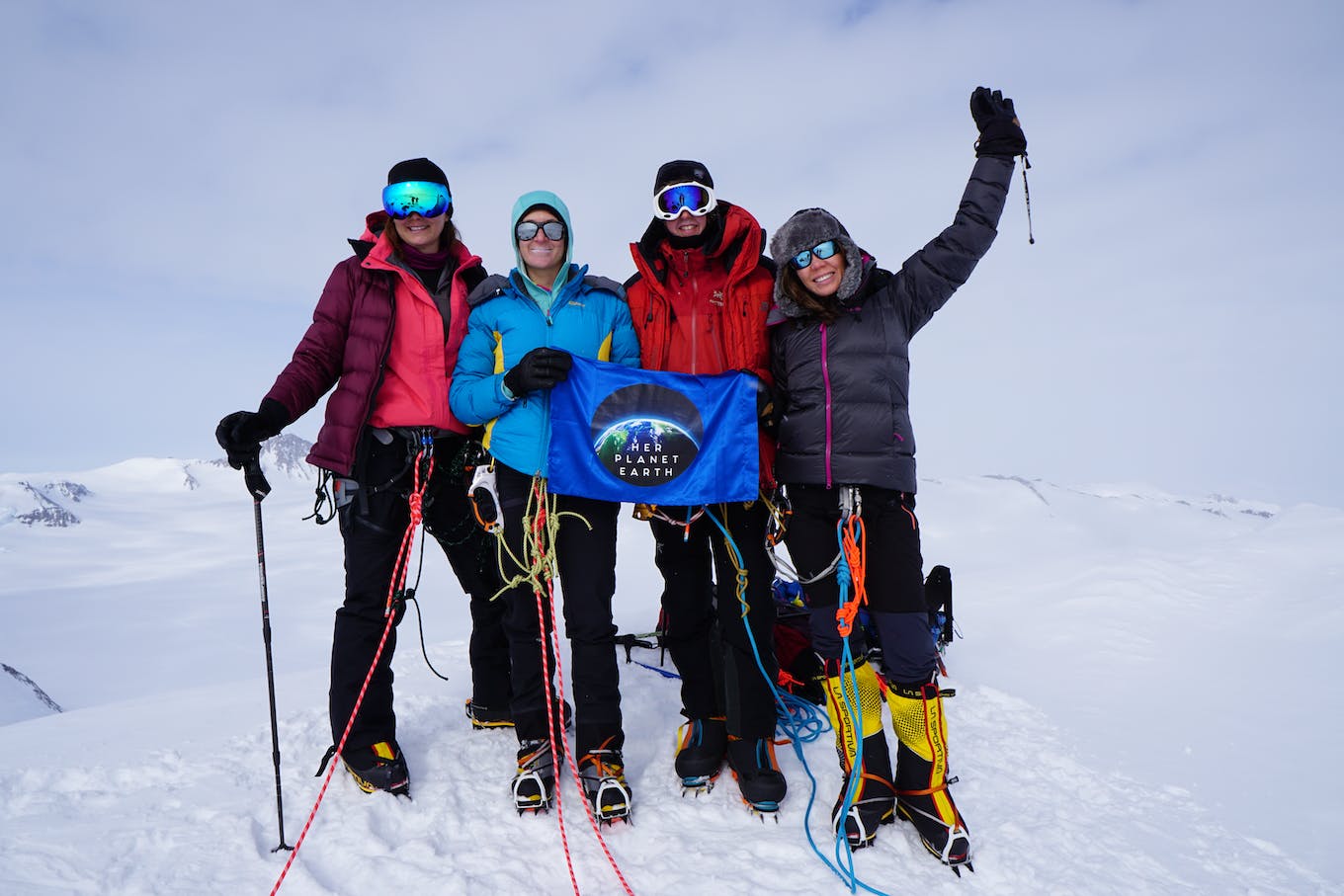 Looking back on our expedition, I now see that Terra Antarctica, as it is also known, has a way of cutting you down to scale and making you ponder your own insignificance. It forces you to re-evaluate everything you know and feel about yourself and your place on this planet.

I realise that the most valuable lessons of the journey resulted from the experiences that, at the time, felt like the most miserable and desolate, that true growth only comes from adversity and challenge. No wonder they say Antarctica gets under your skin, and when that happens, your soul is changed forever.

Christine Amour-Levar is the founder of Her Planet Earth, a non-profit focused on promoting gender equality and environmental conservation.