Australia has several low-carbon development pathways to choose from, such that it can continue to meet economic growth goals while reducing greenhouse gas emissions to zero. Anna Skarbek and Frank Jotzo lay out these options.

Kicking goals is a whole lot easier when you’re running hard, with a clear line of vision. But amid so much backpassing and confusion on climate policy in Australia, it could be easy to lose sight of what we’re really shooting for. For those looking for some perspective on this week’s events in Parliament, a new report for the United Nations shows the first steps and possible stumbling blocks ahead for Australia and 14 other major climate players to achieve the crucial goal of deep emissions cuts by mid-century.

For Australia to play our part, it would mean that by 2050 we had a power sector producing almost entirely emissions-free electricity; a transport system running on electricity and biogas; and buildings and industry with hugely improved energy efficiency. Our remaining emissions – including from mining and agriculture for export – would be offset by carbon farming.

Those are just some of the options we have; in fact, as our research shows, Australia is spoilt for choice with low-carbon options.

The global challenge ahead

Through the Deep Decarbonisation Pathways Project, 15 countries are setting out how their economies can shed the carbon and keep growing their economies. The interim report was by UN Secretary-General Ban Ki-moon and internationally renowned economist Jeff Sachs in New York this week. In September, this report will be presented to world leaders at the UN Climate Summit in New York, where more detailed national reports – including one for Australia – will also be released.

It is a global first that national teams of local experts have prepared detailed analyses of how each country could make deep cuts to carbon in its energy and industrial systems. For most of the 15 countries, the scenarios are more ambitious than what has been modelled in detail by national teams before. It includes not just the United States, Europe, Australia and other rich countries, but also China, India, Brazil and other rapidly growing countries.

Our aim is to show how the world can still limit global warming to a maximum temperature rise of 2°C above pre-industrial levels – and ideally lower – as almost 200 countries including Australia committed to do at the 2010 Cancun climate summit, so that we could avoid the worst of climate change risks and impacts.

That means reducing emissions by around half by 2050, even while tripling the size of the global economic cake. And this new analysis of technology options, energy systems and economies shows that can be done.

How the US, China and Australia can lead from the front

All 15 national teams have found that they could achieve a near-zero carbon economy while sustaining economic growth. The interim results show that Gross Domestic Product (GDP) is expected to grow three and a half fold by 2050 across the 15 countries, while at the same time achieving a 45% decrease in total CO2-energy emissions, and a 56% decrease in emissions per capita.

The solutions differ according to countries’ characteristics, but all show common pillars of great increases in energy efficiency across the economy, a nearly carbon free power system, and switching to low carbon energy sources in transport, buildings and industry. For example, the US report shows energy emissions reduce by 85% while GDP nearly doubles. Its power system in 2050 is 40% renewables, 30% nuclear and 30% carbon capture and storage (CCS) with coal and gas power stations, while oil use is reduced by 88% between 2010 and 2050. 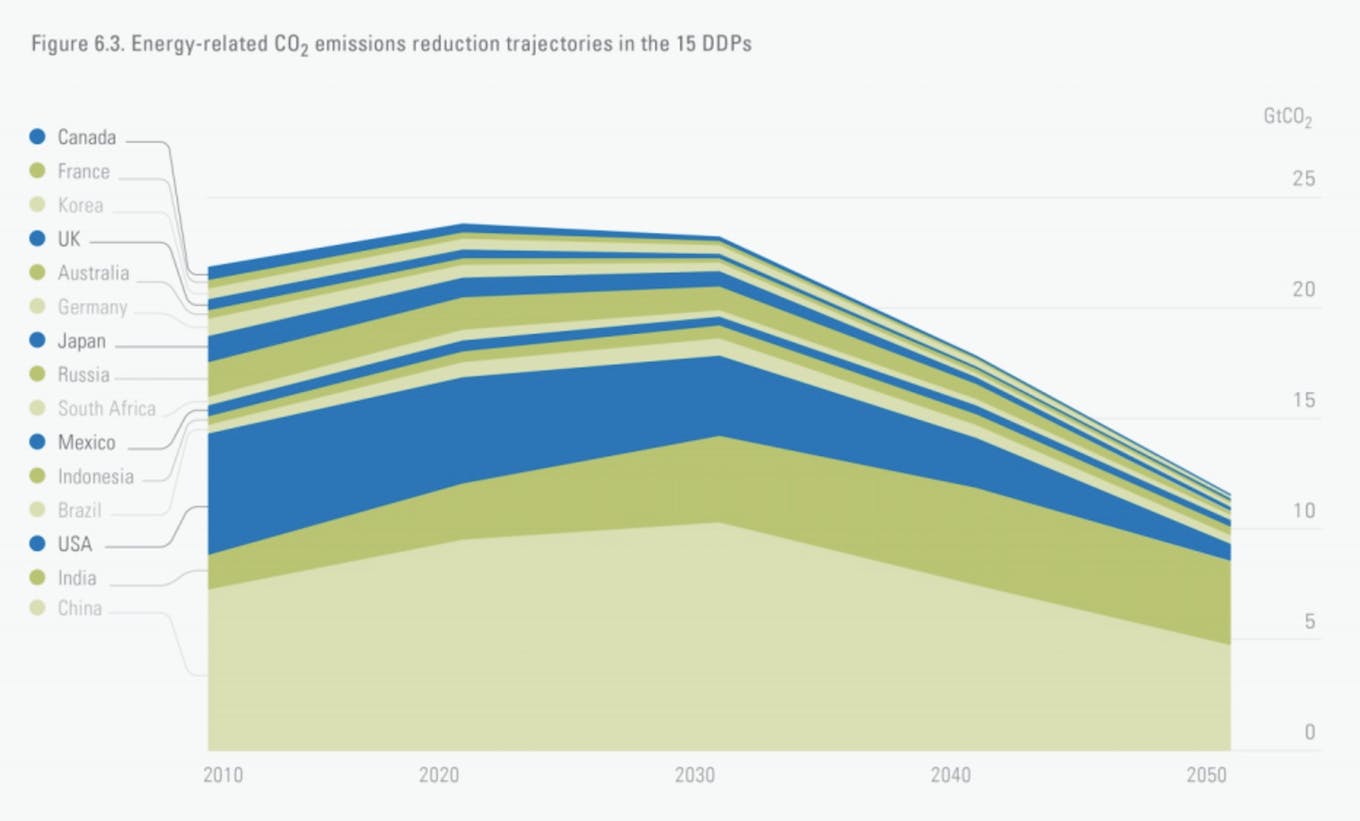 How greenhouse emissions from energy would need to change in the 15 countries between now and 2050. Pathways to Deep Decarbonization: interim report, p.28, CC BY

China’s report shows a decarbonised electricity system, even while electricity demand more than doubles, through use of solar, wind, hydro, nuclear and CCS on coal and gas. China’s report sets out a future where coal is only 20% of China’s total primary energy consumption in 2050, compared to about 70% in 2010, and 90% of coal plants have CCS.

In addition, the output of cement and crude steel are anticipated to peak by 2020. China’s team estimates a ten-fold increase in travel but shows this can be met with only 10% of regular vehicles using petrol or diesel; the rest are electric cars and hybrids, or use fuel cell or biofuels. 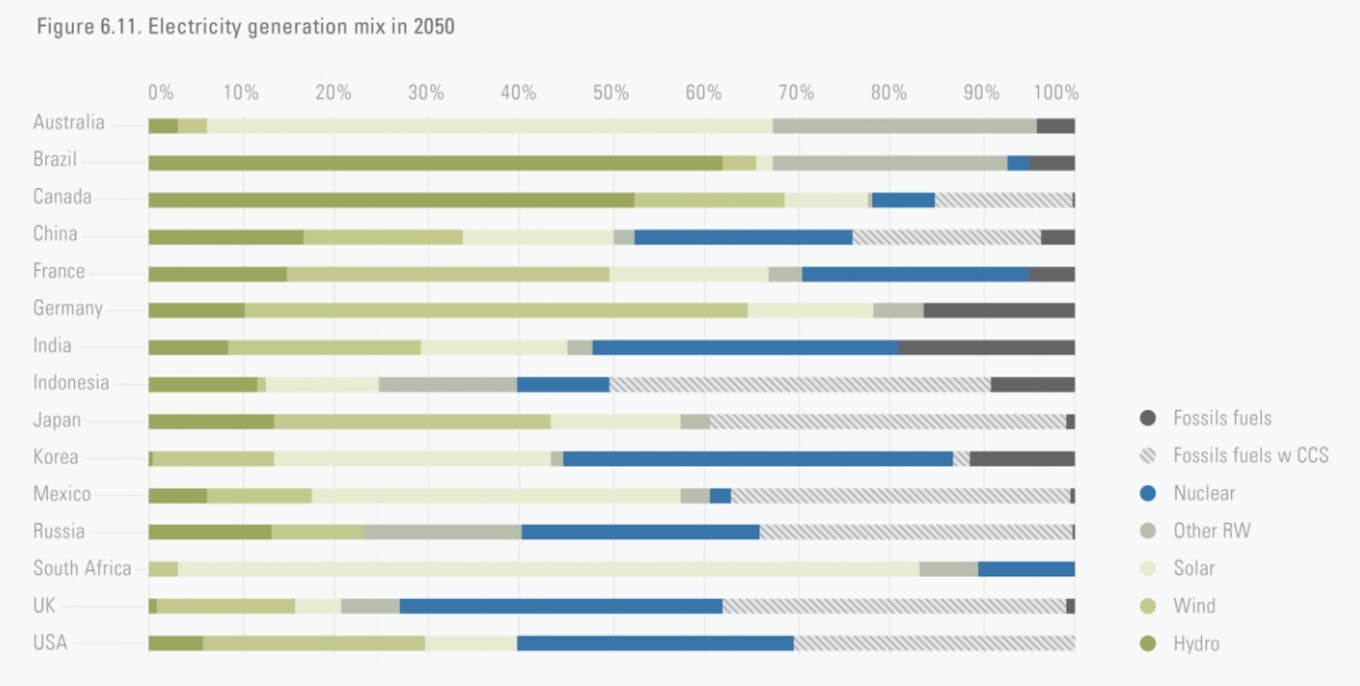 Australia has more renewable energy options than most countries, and can achieve near-zero carbon electricity through renewables alone, or alternatively could introduce some CCS or nuclear in the mix. As electricity is decarbonised, electricity can replace petrol and gas in vehicles and buildings and some industry processes. Remaining fossil fuel use can be shifted to bioenergy.

Australia’s chapter in the report (read from p.42) sets out a 2050 pathway with a 71% reduction in CO2 emissions from energy, while the economy grows by almost 150%. Through additional land-based carbon sequestration, it would keep Australia’s greenhouse gas emissions within the 2°C budget identified by Australia’s Climate Change Authority.

Decarbonisation would mean that the energy system and some aspects of land management look quite different from what they would under a high-carbon scenario. But for every declining technology there are new opportunities arising, and most of the economy would simply motor on. Cleaning up the world’s energy system does not stand in the way of economic prosperity, including for the developing countries.

What’s standing in our way?

However, some key technologies that are critical for deep decarbonisation in all countries’ pathways are not yet technically mature or economically competitive. These include: 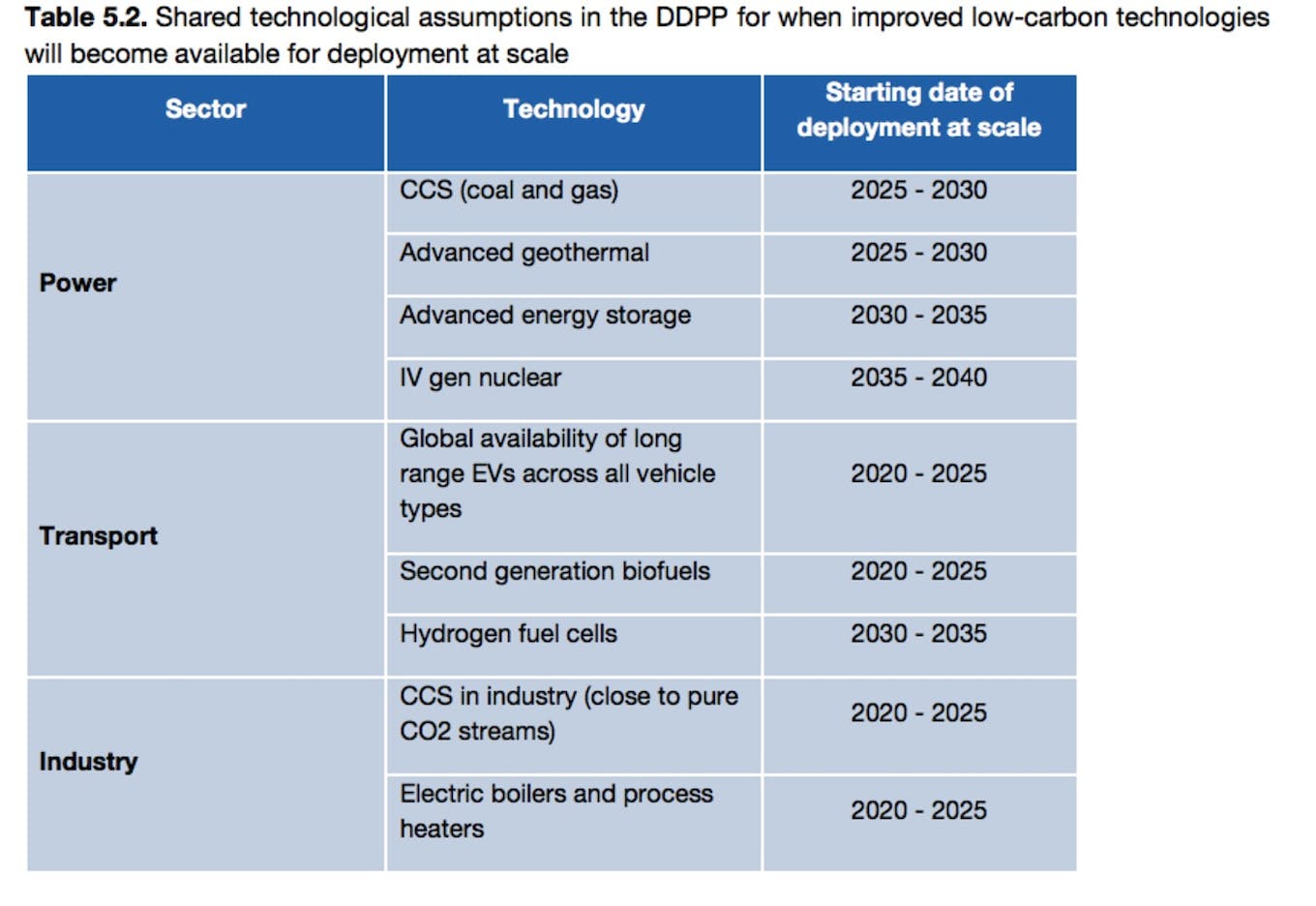 Key technologies that still need to be widely deployed to achieve the deep emission cuts outlined in the report. Pathways to Deep Decarbonization: interim report, p.24, CC BY

To accelerate these, there needs to be a reliable policy framework that gives economic incentives for investment in lower-emission options, and systematic support for research and development where the private sector won’t provide it.

In Australia we have been going forward on that count in recent years. But now – with so much policy uncertainty clouding the future of billions of dollars in investment in renewable energy and other emissions-saving projects – we run the risk of scoring an own goal.

Get in the game

Meanwhile around the rest of the world, progress marches on.

BMW plans to start selling its i3 electric car in China in September. Volkswagen will unveil more than 15 electrified models in China by 2018. And Hyundai, Toyota and Honda will be marketing hydrogen vehicles next year to drivers in California, Japan, Korea and Europe.

Statoil and Statkraft are building a $US2.6 billion offshore wind farm off the UK coast. Drax, Alstom and BOC have been awarded 300 million Euros to build a 426 megawatt carbon capture and storage power plant in North Yorkshire, UK, to power over 630,000 homes and capture 90% of its CO2 with CCS from the outset.

There’s a lot that we can do right now. But we don’t have time to waste.

Just as you do when aiming for sporting success, you start with a goal, you create a long-term plan for how to achieve it, and then you break that down into smaller, achievable steps towards success. That’s what this Deep Decarbonisation Pathways Project is all about.

Keeping below 2°C of global warming is essential to protect human well-being. Let’s keep our eye on the ball and work as a team to get it done.

Anna Skarbek is the Executive Director of ClimateWorks Australia. Frank Jotzo is in charge of grant funding from the Australian Research Council and the Australian government. This article was originally published on The Conversation.