Is Green Mark the answer to greener buildings?

While Singapore's scheme to promote energy-efficient buildings has been improved over the years, it should be critically evaluated to ensure its aims are being realised.

The built environment has traditionally been associated with environmental destruction and degradation. However, we are coming to realise that through good design, proper policy, and careful planning, buildings and cities can provide opportunities for humans to not only exist, but thrive, in a manner that minimises the impact on the environment.

Today, buildings are reasonable for nearly 40 per cent of global greenhouse gas emissions.  Approximately two-thirds of the built environment that exists today will still be in use in 2050. In Singapore, the built environment’s contribution is estimated to be 25 per cent of the total GHG emissions and the average building lifespan is only 16 years. Consequently, we urgently need to:

Singapore has attempted to address these two challenges through the Green Mark programme. Green Mark is a green building standard that has been created and developed by the Building and Construction Authority (BCA) and is designed specifically for tropic and sub-tropic climates.

The Green Mark scheme was launched in 2005 to drive construction towards more environment-friendly designs. There are various categories which specifically address distinct building typologies including existing buildings, new construction, residential, commercial, schools, healthcare and others.

The Green Mark scheme has four rating levels: Certified, Gold, Gold Plus, and Platinum. The rating is determined by the total number of points achieved. There are also prerequisites for higher levels of certification. Most notably, there are minimum efficiency requirements for the building cooling systems since these are responsible for significant portion of overall energy usage. These prerequisites become more stringent as the rating level increases. In addition, Gold Plus and Platinum projects must demonstrate minimum energy savings of 25 per cent and 30 per cent, respectively, compared to a reference model that reflects prevailing building standards and codes. 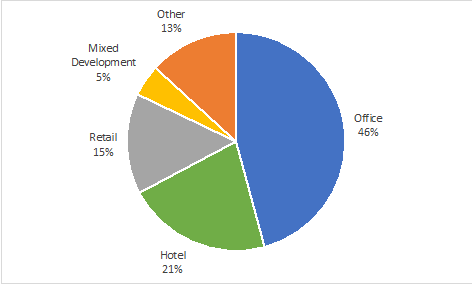 The 2019 benchmarking report contains approximately 1,000 buildings. Figure 1 breaks down the buildings by type. Office buildings comprise almost half of the data set and an estimated 40 per cent of the greenhouse gas emissions, and were therefore were selected as the focus of this analysis.

The building energy data set includes buildings that achieved a Green Mark rating, as well as those that did not pursue Green Mark certification. 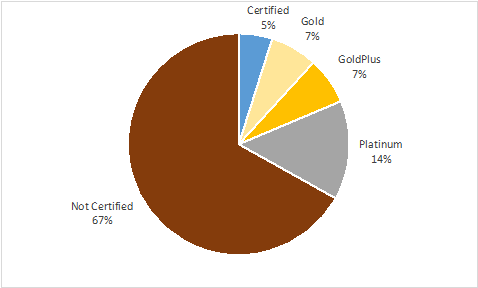 Only 33 per cent of the office buildings in the data set achieved Green Mark certification. Figure 2 breaks down these buildings by rating level. Although the percentage of buildings that have achieved a rating is relatively low, the numbers are steadily growing. In addition, the Building Control Act of 2008 made Green Mark certification mandatory for all new buildings and existing buildings undergoing major retrofits. This was a significant step and will help to improve the country’s built environment.

What is particularly interesting, is the distribution of the rating levels. Figure 3 shows the breakdown of office buildings that achieved Green Mark certification by rating type. 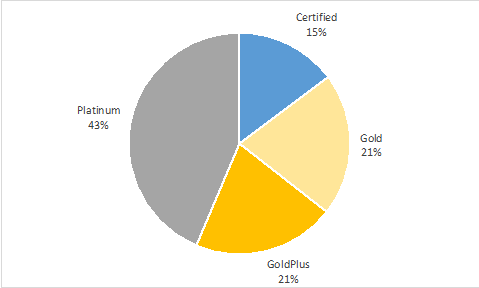 Surprisingly, almost half achieved Platinum, the highest rating. This is relatively high for a level that is supposed to represent the pinnacle of design and efficiency. To put this into context, we can look at the distribution of certification levels for other green building schemes. The Leadership in Energy and Environmental Design (LEED) Program is a well-known international standard.  For comparison, an analysis of LEED projects found only 11 per cent obtained LEED Platinum, the highest rating level. This data is represented in Figure 4. 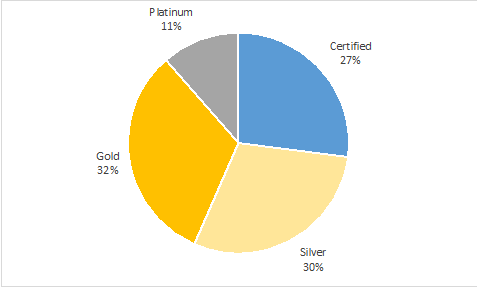 The difference in rating distribution between the programmes seems to suggest that the threshold for achieving Green Mark Platinum is not sufficiently challenging. One could argue that the Green Mark criteria should be redesigned to provide a distribution where most of the projects fall in the mid-range. The highest level should be reserved for the best buildings. Another alternative would be to introduce an element of relative performance, whereby buildings within a group would be compared to others.

Any building that achieved the point threshold for Platinum would be compared to other Platinum-potential buildings. Only a fixed percentage of buildings from group would achieve the designation of Platinum, while the others would be Gold Plus.

Or, the entire system could be relative, similar to grading an exam on a curve. This would be challenging and potentially frustrating for architects and engineers, but would encourage better, higher performance buildings. Regardless of the specifics, the aim should be to create a system that inspires and challenges teams to create the best possible buildings.

One way to compare energy use across buildings is to look at energy use intensity (EUI). EUI is the total annual energy used by a building divided by the floor area. A low EUI indicates an efficient building, as a relatively small amount of energy is used per square metre. Building Energy Performance, which includes EUI, is one of five categories of focus in the Green Mark scheme. Therefore, it is reasonable to assume that EUI should decrease as rating level increases. That is, higher rated buildings should use less energy. At the very least, Gold Plus and Platinum buildings, which have additional requirements on cooling efficiency and building energy use, should show a significant improvement in EUI compared to others. 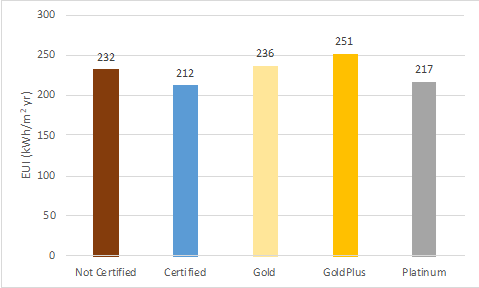 Interestingly, there does not appear to be a strong correlation between Green Mark rating and EUI. Figure 5 summarises the average EUI of office buildings by rating level. Buildings that were not certified under Green Mark use less energy than Gold and Gold Plus buildings. Certified buildings were the most efficient group, using less than even Platinum-rated buildings.

Figure 6 provides another way of looking at the data, where each building is represented by a vertical line corresponding to its EUI. This provides context on the sample size and distribution. It also suggests that the buildings at the extremes, which appear to be outliers, should have their data verified. 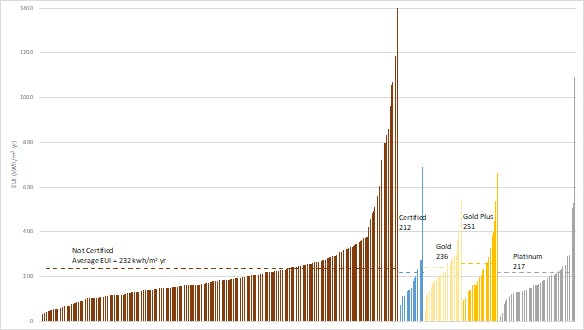 For example, it is highly unlikely that an office building is using less than 10 kWh/m2-year. It is possible that the data represents only a portion of the energy use, perhaps that attributed to the common areas but not the tenants, while the area provided is the total building area. In this case, the EUI would appear artificially low. Similarly, it is surprising that some buildings are using more than 1,000 kWh/m2-year, including two Green Mark Platinum buildings.

Regardless, it is still clear that Green Mark rating does not have a significant impact on building EUI. There are many potential explanations to rationalise this finding. Higher rated buildings may have more amenities, which contribute to increased energy use. Non-certified buildings may have more areas that are naturally ventilated and not mechanically cooled. Buildings may simply not be performing as they have been designed due to mechanical issues, inefficient set points, occupant behaviour, or other issues. Whatever the issues are, a detailed investigation into building performance and Green Mark rating should be undertaken.

The Green Mark scheme should be commended for its efforts to create a green-building programme specially designed to address the unique challenges of tropical climates. At the same time, it should be critically evaluated to ensure the aims of the program are being realised. Since its inception, Green Mark has continually revised and updated its standards. Here is another opportunity to reflect upon the system and consider ways to better align its goals with real-world results.