Economists discuss how Indonesia is showing countries that it is entirely possible and profitable to tackle climate change.

Indonesia’s recent socioeconomic performance has been impressive. Over the past two decades, the country has cut extreme poverty in half and doubled per capita income.

This economic growth has come at a steep cost, including slashing forests, spewing greenhouse gases, and burning enough coal that nearly 60 per cent of Jakarta residents suffer from air pollution-related diseases. Indonesia’s future growth, though, could look very different.

A new report from the Indonesian government’s Low Carbon Development Initiative found that less carbon-intensive, more efficient energy systems can deliver an average of 6 per cent GDP growth per year until 2045—even more economic growth than the business-as-usual path, with continued gains in employment generation, increased incomes and poverty reduction. This strategy would cut the country’s greenhouse gas emissions nearly 43 per cent by 2030, exceeding Indonesia’s international climate target.

The government is now feeding findings from this new report directly into its next five-year development plan, which will cover 2020-2024. By doing so, Indonesia can upend the false choice between economic growth and sustainability, and show countries around the world that it is now entirely possible and profitable to tackle climate change economy-wide.

A triple-win for economy, people and environment

So what would low-carbon growth actually look like for Indonesians?

The gains from low carbon development will consistently and increasingly yield more over the next decades, starting immediately.  In 2045, Indonesia will have added $5.4 trillion to GDP, relative to business-as-usual.

Some of those gains in 2045 stem from: 15.3 million additional and good quality jobs, which are greener and better paid; extreme poverty halving again, to 4.2 per cent of the population relative to 2018; about 40,000 lives saved every year from reduced air and water pollution; and the preservation of nearly 16 million hectares of forests that would otherwise have been cut down—an area of land larger than the size of England. Additionally, air quality and living conditions will have vastly improved, and the opportunity gap between women and men, and between provinces, will have diminished. 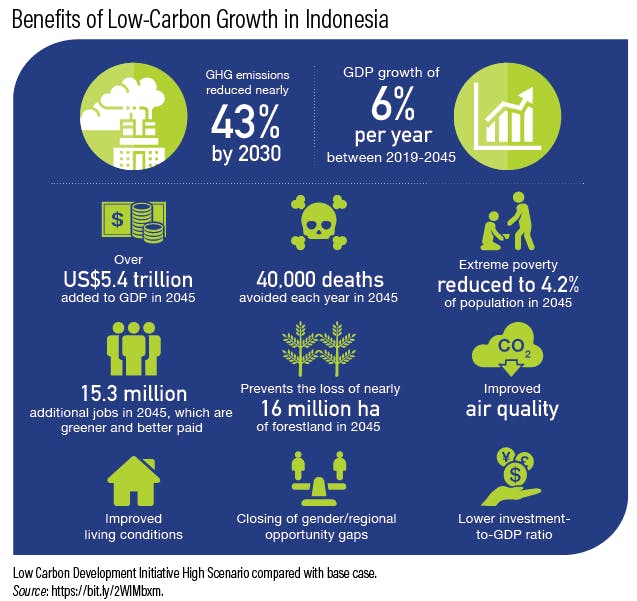 Importantly, this Indonesia of the future will offer better value to investors than an Indonesia that grows through extraction and fossil fuel use. With low carbon development, each dollar added to the country’s GDP requires less up-front investment than it would with business-as-usual development, while also reducing the need for health expenditures associated with air and water pollution.

Getting there from here

This vision of a clean and green Indonesia may appear far away. A wholesale economic shift will require a concerted policy effort, with full participation from the national government, local governments, the private sector and civil society, as well as increased financing from international development finance institutions and private investment. But by setting strategic policies with clear incentives and signals for the private sector, Indonesia’s government has its future within reach. Required actions include:

Crucially, Indonesia must ensure a just transition to a low-carbon economy. While better for the Indonesian economy and people as a whole, a small fraction of people and businesses— especially those that rely on high-carbon sectors and resource extraction—may be negatively impacted by Indonesia’s shift to a low-carbon economy. Low Carbon Development Initiative policies must support these people as they build new capabilities to participate in and benefit from the new low carbon economy.

The report did consider even more ambitious policies and interventions, which would lead to even greater emissions reductions and better social and economic outcomes. This scenario, however, comes with implementation challenges. The government would need to further develop technical and institutional capabilities to move in this direction.

If Indonesia can do it, so can other countries

Indonesia is the world’s 15th-largest economy and its fourth-largest greenhouse gas emitter. Given the country’s outsized impact on the global climate, transitioning now to a low carbon economy will be good not only for Indonesia, but for the whole world.

Perhaps just as important, other governments can learn from the country’s example. Indonesia’s new development plan is ambitious, yes, but it is also necessary, achievable and economically prudent. If Indonesia – an emerging economy with an imperative to improve its people’s standard of living – can pull off low carbon development, then other countries can, too.

Leonardo Garrido is a consultant at the World Bank, while Sonny Mumbunan is a senior economist and research associate at World Resource Institute (WRI), and Delger Erdenesanaa is communications specialist at WRI. This post is republished from the WRI blog.