Based on financial inputs from overseas, 40 per cent of 'committed emissions' from a sample of coal plants that have been built or proposed since 2015 could be attributed to these nations – with most of the remainder coming from Chinese banks.

Coal use needs to rapidly fall this decade if the world has any chance of achieving the 1.5C temperature target of the Paris Agreement, yet new coal power plants are still being built.

Severe criticism is often levelled at Asian nations where the vast majority of coal power construction is taking place, while coal use declines in Europe and North America.

However, our new study – published in Environmental Research Letters – finds that a different picture emerges when emissions are based on who has financed coal plants rather than who is building them.

Funding for coal projects has often come from banks and investors in wealthy European nations and the US.

Based on financial inputs from overseas, we find that 40 per cent of “committed emissions” from a sample of coal plants that have been built or proposed since 2015 could be attributed to these nations – with most of the remainder coming from Chinese banks.

Coal remains the dominant source of energy-related carbon dioxide (CO2) emissions, responsible for around 40 per cent of the global total.

Around 700 gigawatts (GW) of new coal-fired power capacity has been added globally since 2015 – the year of the Paris Agreement – and another 500GW is currently in the pipeline.

Most of this new coal capacity is coming from nations the United Nations Framework Convention on Climate Change (UNFCCC) describes as “Non-Annex I”, which encompasses low- and middle-income countries and includes China and India. The location of the newest coal plants can be seen in the figure below, with China the clear frontrunner. 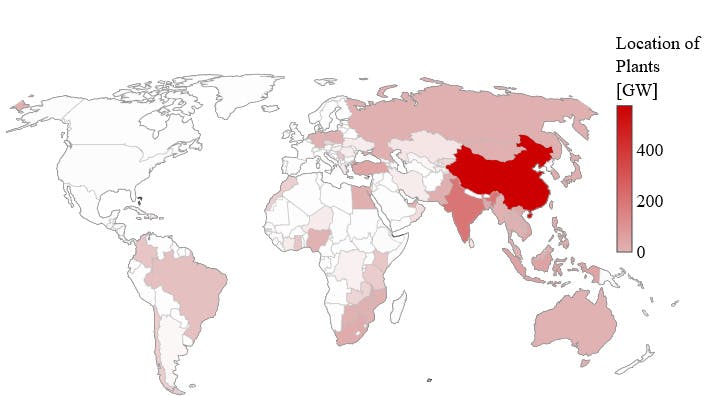 Capacity of coal plants built since 2015 and currently in the pipeline grouped by country. Image: Manych et al.

In our research, we provide an overview of cross-border financial flows for coal-fired power plants and relate these flows to emissions that these plants would generate in future years if they continue to operate in line with historical averages.

There are several different stages in the financing of these plants, which are summarised in the figure below.

Developers hold contractual agreements with other stakeholders – including investors, governments and construction companies – in order to develop the power plant.

They can use equity – also known as stocks or shares – and bonds, which are essentially debt. Both of these are purchased by institutional investors, such as global asset management corporations and pension funds, as a means of investment.

The global banking sector also provides and mobilises financing through loans – mostly corporate – and the underwriting of share and bond issuances, meaning banks take on financial risks for a fee.

For our analysis, we merged financing data from the environmental NGO Urgewald for the years 2017 and 2019 with coal plant data provided by the NGO Global Energy Monitor for the year 2020. This data covered coal plants built since 2015 as well as those currently in the pipeline.

While the data was not comprehensive and it was difficult to assess what share of all financing flows it covered, it provided an insight into developers, banks, institutional investors and the capital flows between them on a global scale.

When it came to loans and underwriting, the green map below shows that, once again, China has played a dominant role.

However, there was also substantial financial support for coal plants coming from industrialised nations the UNFCCC defines as “Annex I”.

Commercial banks from Annex I countries with domestic coal phaseout targets – such as the UK, France and Switzerland – have continued to finance foreign coal developers.

In total, $413bn was granted to foreign developers between 2012 and 2019, which amounts to around a quarter of the total financial support covered by our data.

More than 80 per cent came from banks in Annex I countries – primarily from western Europe and North America – and mostly targeted Non-Annex I countries. A regional breakdown of the cross-border flows can be seen in the chart below on the right.

Loans and underwriting for the construction of coal plants. The data cover financial transactions between 2012 and 2019. Left: Location of commercial banks that finance coal developers. Right: Breakdown of cross-border flows from banks to developers by region. Image: Manych et al.

The investment data for bonds and shares suggested a similar pattern. Financial institutions from the US and Europe have tended to invest overseas while Asian investors directed capital both internationally and domestically.

Institutional investors from the US accounted for the largest amount with $80bn, out of which 86 per cent was invested abroad, followed by largely domestic investors from Japan and India. This is shown in the purple map below.

Investors from Europe and Canada have mainly financed foreign developers and therefore accounted for the majority of cross-border investment, as the chart below on the right shows.

The magnitude of the financial support and the role of individual countries becomes evident when assigning potential lifetime emissions based on the source of finance.

We calculated these emissions based on the greenhouse gas protocol using “committed emissions” that recently constructed and proposed coal plants would produce over their lifetimes, if they are all built and continue to operate in line with historical averages. We then assigned these emissions to financing countries in relation to their share of the investment.

The chart below shows emissions assigned to countries in proportion to their role in the different financing dimensions, with the lighter shades indicating industrialised Annex I nations and darker shades representing Non-Annex I nations.

When coal plant emissions are based on territorial location or developers’ origin (red) they are – unsurprisingly – almost exclusively assigned to Non-Annex I countries, mainly China and India.

However when considering overall financial flows (grey), Annex I countries account for about 40 per cent of committed emissions, largely due to their high share in loans and equity investment.

Meanwhile, the share assigned to Non-Annex I countries is almost entirely explained by domestic underwriting from Chinese banks.

Expected territorial and finance-based emissions from coal plants for different categories, including projects constructed since 2015 or currently in the pipeline. Bars show the share of emissions for the largest countries, grouped by Annex I (light colours) and Non-Annex I (dark colours). Image: Manych et al.

The first consists of countries from Asia and Africa, which all show substantially lower finance-based emissions than territorial emissions.

The opposite is true for the second group, which consists of the US, Japan and European countries such as the UK, France and Germany.

When all the differences between nations’ finance-based and territorial emissions, known as “emissions transfers”, are added together, the sum total is around 43 gigatonnes (Gt) of CO2 – more than the world’s annual CO2 emissions.

This research opens up possibilities for effectively regulating the construction of new coal plants in the nations where finance stems from, rather than where they are constructed.

There has been some progress in recent years, with dozens of significant banks and insurers in these nations committing to divest from coal-fired power and coal mining.

Moreover, the UK has taken steps to make climate-related disclosures mandatory across the economy and various countries including the US and South Korea are pledging to end overseas coal financing using public money.

Meanwhile, support for coal projects through China’s Belt and Road Initiative in countries shows how foreign investment can slow nations’ progress away from fossil fuels.

A more detailed analysis of policy options needs to be undertaken in future research.

However, in our view, governments that have stopped domestic development of new coal capacity – such as the members of the Powering Past Coal Alliance – could play a role in regulating the international finance flows for the construction of coal plants.

Wealthy countries could introduce consistent and binding reporting standards for the financial institutions they host, including emissions accounting standards based on the expected lifetime emissions of a project.