Fixing the crisis of confidence in the Green Climate Fund

The World Resource Institute lays out a report that gives recommendations for strengthening key aspects of the Green Climate Fund (GCF).

The Green Climate Fund’s mandate couldn’t be more crucial: accelerating climate action in developing countries by supporting transformational investments in adaptation and emissions reduction. Projects already financed by the GCF range from solar power in Mongolia and improved water management in Colombia, to climate-resilient agriculture in Ghana, Nigeria, and Uganda.

However, the GCF is facing a crisis of confidence. Its most recent Board meeting, in July, was spectacularly unproductive, and its executive director left the organisation. This is only the latest example of a broader problem—a GCF that in the eyes of many can be a lot more effective and efficient. More resources and strengthened governance are fundamental to restoring confidence in the GCF, as we lay out in a new working paper, Setting the Stage for the GCF’s First Replenishment. After speaking with 86 stakeholders—including board members from developing and developed countries—we have recommendations for strengthening key aspects of the GCF.

In 2014, contributors pledged $10.3 billion to the GCF, making it the biggest multilateral climate fund. This money is used to stimulate environmentally sustainable economic growth in developing countries by funding projects like renewable energy facilities and storm shelters that reduce emissions and adapt a country to the changing climate.

Now, four years after the initial contributions were pledged, the GCF is getting close to allocating most of its resources and triggering a new round of funding(“replenishment”). However, given the GCF’s crisis of confidence, uncertainty looms over the process.

That is a problem, for the present as well as the future. Developing countries have prepared their nationally-determined contributions (NDCs, which are national climate plans) with the expectation that–in addition to their own domestic budget resources–they can count on financial support from developed countries, including through the GCF. Given the longer-term objectives of the NDCs, good planning and timely implementation are key; this in turn requires predictable external financial support.

Hence, replenishing the fund and providing predictability to that funding is very important. The question is, how should contributing countries split the bill?

For the GCF to work, it needs predictable funding and governance reform.

How should the financial burden be allocated? The same way you might approach dividing up a dinner check among friends: agree on an objective, transparent, and fair way to determine who should pay for what.

In a similar manner, contributors might apply objective criteria to assess their contributions to the GCF. In our paper, to advance the conversation, we designed a formula that combines three objective criteria: gross national income (GNI), greenhouse gas (GHG) emissions and GHG emissions per capita. This is just one suggestion; the important thing is that any way of thinking through what countries contribute should remain based on objective data. You can interact with our methodology using our Contributions Calculator: 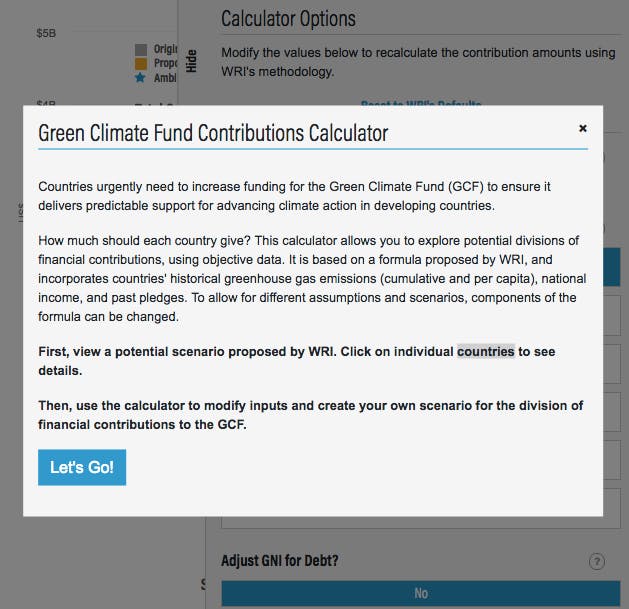 As expected, applying the formula will require most developed countries to increase their contributions. For leading countries—Denmark, Finland, France, Germany, Japan, Norway, Sweden, Switzerland and the United Kingdom—each of whom exercised exemplary global leadership in the initial round of funding, giving more than the minimum—we recommend they at least match their ambitious contributions in the replenishment.

More details on what our formula would imply for each of the contributing countries can be found in our GCF Contributions Calculator.

Another feature of the Calculator relates to other countries, which might join the mix of contributors; you can experiment with the possibilities in our Calculator. If developing countries decide to contribute, especially those that are already major emitters, it must be clear that these contributions will be voluntary and will not count towards the international finance goal of mobilizing $100 billion per year from 2020 onwards by developed countries.

The most recent GCF Board meeting in South Korea in July 2018 ended in gridlock. The Board had $1 billion in projects in the queue, and shockingly approved none. Project proposals from countries all around the world (like Tonga, India, Guatemala, South Africa and Cote d’Ivoire) are still waiting their turn. The Board also failed to advance preparations for the replenishment process.

This is just a recent example of deficiencies in the GCF’s governance system, which undermine confidence stakeholders’ confidence in the GCF – including developing and developed countries. This loss of confidence will potentially restrain contributors from making new funds available to fill the coffers of GCF, subsequently affecting developing countries’ ambition to contribute to the timely implementation of the Paris Agreement.

This lack of progress corroborates concerns about the GCF’s governance interviewed stakeholders shared with us. We identified several shortcomings. We think three cross-cutting solutions can unlock the gridlock:

We need the GCF. The GCF needs us.

For the GCF to work, it needs predictable funding and governance reform. Predictable funding and governance reform can only come from committed leaders, who support climate action and from that perspective are willing to support a dynamic and transparent GCF, which can take risks for the sake of promoting bold action. Time is not on our side, leaders need to act to make sure that GCF can make up its promise to support transformational change in developing countries.

Jacob Waslander is a senior associate at the World Resources Institute. He began his international career at the legal affairs department of the Dutch Ministry of Foreign Affairs, holding positions in the EU, UN, and World Bank.This post is republished from the WRI blog.