Why the smart money is looking at clean energy in Asia

With demand for clean energy outstripping supply in Southeast Asia, private companies and institutions have an increasingly crucial role to play in plugging the finance gap for such projects.

Driven by rising urbanisation and a growing middle class, demand for energy in Southeast Asia is set to increase by a staggering 80 per cent between 2013 and 2035 - a rise equivalent to the current demand in Japan, estimates the International Energy Agency.

This supports a near tripling of the region’s economy, but one of the biggest challenges facing the region is balancing the need for affordable energy with curbing greenhouse gas emissions, the main cause of climate change.

Clean, renewable sources will have to become a vital part of the energy mix, even as reliance on oil imports rises across the region. Bloomberg New Energy Finance expects that US$2.5 trillion will be spent on renewable technologies in Asia Pacific by 2030 – a hole that governments alone cannot fill.

These include private equity funds, companies and increasingly, family offices, which are gradually taking to the concept of sustainable investing.

“Clean energy is definitely a large trend in sustainable investing and we really see that happening across the region,” says Jessica Robinson, chief executive of the Association for Sustainable & Responsible Investment in Asia (ASrIA).

“We are seeing a lot of positive trends, and one is that governments are trying to bringing in private capital to co-share not only the capital but the returns and risks,” Robinson adds.

Potential investors are now more comfortable with the risks involved in the building and running of power assets because returns have been attractive and policy support is gradually increasing albeit the level of support varies across the region.

Furthermore, an ecoystem of companies that provide services and hardware in clean energy is emerging. All these factors are contributing to the growing awareness among private investors that the clean energy industry is viable.

Nonetheless, they still need to be nudged to invest, mainly by governments, and a good way to do that is to co-share risks.

“Companies hate uncertainty… (so) this is where policy support comes in,” Robinson says.

For example, governments can back a fund specialising in clean and renewable energy and match the private-sector contributions, which Indonesia has done. They can also help with valuing projects more effectively by putting a price on carbon, she adds.

In the meantime, the potential for the private sector is in Southeast Asia is huge.

“There is more money wanting to go into projects than there are projects,” says Michael Quah, professor of chemical and biomolecular engineering at the National University of Singapore (NUS).

“When you go to any conference on financing, 90 per cent of them are bankers and money types. The rest are engineers,” says the professor, who is also the director of the NUS Energy Office.

Berkeley Energy, Armstrong Asset Management and Equis Funds Group are among the private groups that started investing in renewable energy projects in the region in the past decade. 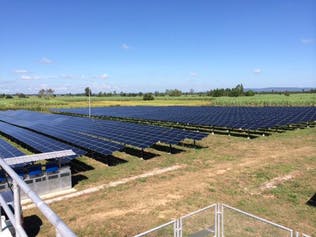 One of the solar-energy projects that Armstrong has funded in Nong No, Northern Thailand. Image: Armstrong Asset Management

Armstrong’s chief executive officer Andrew Affleck said the fund’s early participation in the sector has generated goodwill among governments in the region.

“There are compelling reasons for private finance to invest in the renewable energy sector – and the subsequent success of companies like us should eventually encourage broader participation from large private sector institutions,” Armstrong told Eco-Business.

“New initiatives are being put in place to increase such participation,” he adds. For example, governments are reaching out to private companies to collaborate on public-private partnerships and working on increasing tax incentives for green projects.

Singapore-based Equis Funds Group, meanwhile, invests in Soleq, a solar utility also based in the city that owns and operates 70 per cent of 10 solar facilities - totalling 91MW - in Thailand.

Soleq is also financing the construction of two projects in Philippines totalling 50MW, with the rights to acquire and fund an additional 150MW of solar projects.

There are compelling reasons for private finance to invest in the renewable energy sector – and subsequent investment success of people like us should eventually encourage broader participation from large private sector institutions.

They invest in private funds such as Armstrong’s as well as directly in projects, providing both debt and equity.

The name is Bond, Green Bond

While the efforts by the private sector to invest in clean energy projects have been promising, far more is needed in terms of fund-raising for projects in the region.

One innovative funding stream that could potentially make a huge difference is green bonds.

Companies that want to build, for instance, wind or solar farms, issue these bonds, which promise a certain return over the life of the project. Investors fund them by buying the bonds.

For these private-sector investors, such credit-worthy fixed income opportunities may be attractive as they provide steady returns over five to 20 years.

In recent years, green bonds have raised money for clean energy, mass transit, and other low-carbon projects that help countries adapt to and mitigate climate change.

Since the first green bond was developed by the World Bank and Skandinaviska Enskilda Banken (SEB) in 2007, the global market for such bonds has grown rapidly at a compound annual rate of more than 50 per cent, according to S&P Dow Jones Indices, which runs the S&P Green Bond Index consisting of 150 such issuances.

“If the current trends continue, (the global green bond market) could grow from USD$150 billion to USD$200 billion over the next three to five years, thus providing an array of investment opportunities to long-term fixed income investors,” she writes in the report.

They received more than US$2 billion in orders, reflecting the huge demand for such products and paving the way for more companies in the region follow in its footsteps.

Institutions that are advocating green bonds include ADB’s Credit Guarantee and Investment Facility (CGIF), which provides credit guarantees to companies that want to issue local-currency bonds in Southeast Asia.

The CGIF is focusing on green bonds this year and hopes to lead the way in the development of green bond in the region, CGIF’s chief executive Kiyoshi Nishimura told Global Capital.

The agency knows there are huge green investment needs in Asean countries, especially in renewable energy and energy-efficiency areas, and there is almost no precedent for green bonds in Asia, Global Capital reported. That is why it is focusing on green bonds.

“Most likely, our initial projects for green bonds will be for renewable energy or energy efficient investments,” Nishimura says. “We are already working on transactions involving renewable energy investments in the Philippines (geothermal) and Laos (hydro) and exploring if they can be structured as green bonds.”

Despite the rosy outlook for green energy projects in Southeast Asia, challenges do exist, and can be as simple as the lack of communication between the public and private sectors.

Affleck agrees, but adds that it’s “getting better in some countries.”

The Philippines Energy Regulatory Commission, for example, now holds timely public stakeholder consultations to address problems, he says. “And they do try to solve them.”

In addition, supply chain issues such as long waiting times for equipment and spare parts, weak support and maintenance services may add to the difficulty of actually building a project, he says.

The top item on his wish list, however, is that there will be closer cooperation between government departments.

“I hope to see better coordination between the land office and Ministry of Energy, for example, and guaranteed time lines for processing applications with more transparency,” he says. “Speeding things up, cutting down the red tape would help.”

Green bonds – and a newer, flashier financing vehicle called the yieldco – are generating considerable buzz in the renewable energy sector. In Asia, it’s early days but experts say it’s a matter of time before these financing options become widely available for infrastructure owners and investors.
The emerging renewable financing landscape