Why is it so hard to sell sustainable palm oil?

As the company that claims to produce more certified sustainable palm oil than any other, Malaysia’s Sime Darby Plantation knows more than most about how to grow the world’s most consumed edible oil in ways that do not harm people or the planet.

The company sells one fifth of the world’s production of palm oil certified by the Roundtable on Sustainable Palm Oil (RSPO), an association set up to break the link between palm oil and deforestation, labour exploitation, and the violation of indigenous people’s rights in tropical countries where the crop is grown. 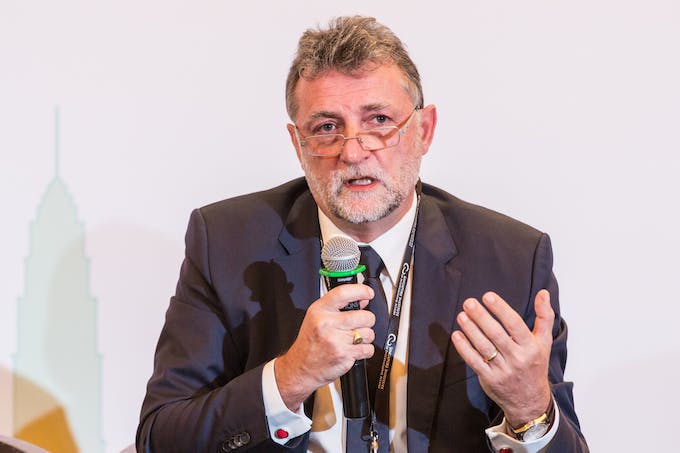 But the man whose job is to ensure the company, which grows on an area of land the size of Brunei in five countries, keeps its promises to leave forests standing and treat its employees fairly, has his eyes open to the difficulty of selling sustainable palm oil.

“Some 50 per cent of the oil that we produce—all of which is certified sustainable—actually isn’t sold as sustainable palm oil,” says Dr Simon Lord, Sime Darby Plantation’s chief sustainability officer.

Sime Darby produces 2.48 million tonnes of crude palm oil a year, of which 98 per cent is certified sustainable.

“The willingness of the market—and we are talking here about Europe—to pay more for sustainable oil is just not there,” he says, referring to the European Union’s proposed ban on biofuels by 2020, to tackle deforestation in Malaysia and Indonesia, the world’s two biggest oil palm producers.

I don’t believe that a boycott is going to protect forests, and I certainly don’t think it is going to restore them. If you really want to stop deforestation, then you have got to be involved in the conversation.

Lord is also of the view that recent moves by some European retailers—most recently British highstreet supermarket chain Iceland—to remove palm oil from its products are misguided, and do nothing to protect Southeast Asia’s rainforests.

In this interview with Eco-Business on the sidelines of the 5th Singapore Dialogue on Sustainable World Resources, the British executive talks about why selling sustainable oil palm is so difficult, the EU’s moratorium, the impact of climate change on the palm oil industry, and his company’s efforts to improve human rights on its plantations.

How successful has Sime Darby been at selling sustainable palm oil, bearing in mind that big buyer markets such as China and India are not as concerned about sustainability as markets such as the EU?

We have had a long history of selling into the EU. The maturity of the market means that European consumers are very much aware of the environmental impacts [of palm oil cultivation], although not as aware of the social impacts.

People say that the Chinese don’t care [about environmental issues]. Actually they do. And there is growing evidence that Chinese palm oil buyers are putting in sustainability minimum criteria. Is it too late? Is it enough? That’s the question.

We have to operate with one standard across the five countries that we operate in—Malaysia, Indonesia, Liberia, Papua New Guinea and Solomon Islands. But sadly, some 50 per cent of the oil that we produce—all of which is certified sustainable—actually isn’t sold as sustainable palm oil. The willingness of the market—and we are talking here about Europe—to pay more for sustainable oil is just not there.

What effect will Iceland’s ban on palm oil for its own-label brands have on the market?

I applaud a company that puts social and environmental thinking into the bottom line. But think it through. About 70 million tonnes of palm oil is produced globally, and Iceland uses about a thousand tonnes. That equates to about 100 to 200 hectares of palm oil plantation—that is not a big area.

But I don’t believe that a boycott is going to protect forests, and I certainly don’t think it is going to restore them. If you really want to stop deforestation, you have got to be involved in the conversation.

Boycotts affect the least productive elements of the supply chain—which is the smallholders. What options will a boycott leave them with? They can’t grow anything else, because of the density of palm oil cultivation. Their other option is either to burn that palm oil off, or move into new areas, and those new areas are likely to be forests.

Do you feel that Iceland’s ban will prompt other retailers to do the same?

No. Many of the other big users of palm oil have got involved in the debate, and have taken direct action to address the problem. Iceland never got involved with initiatives on the ground that could push the palm oil industry towards a more sustainable future. What will happen is that the campaigning NGOs will see this as a way of ratcheting up the debate.

And you have to make sure what you are replacing palm oil with is less environmentally damaging. Soy is the logical replacement for palm oil in the European market—but it is 10 times more destructive to forests, as you need 10 times more land to grow an equivalent amount.

There is no doubt that palm oil is responsible in some part for deforestation. But walking away from the industry is not going to help us find solutions. 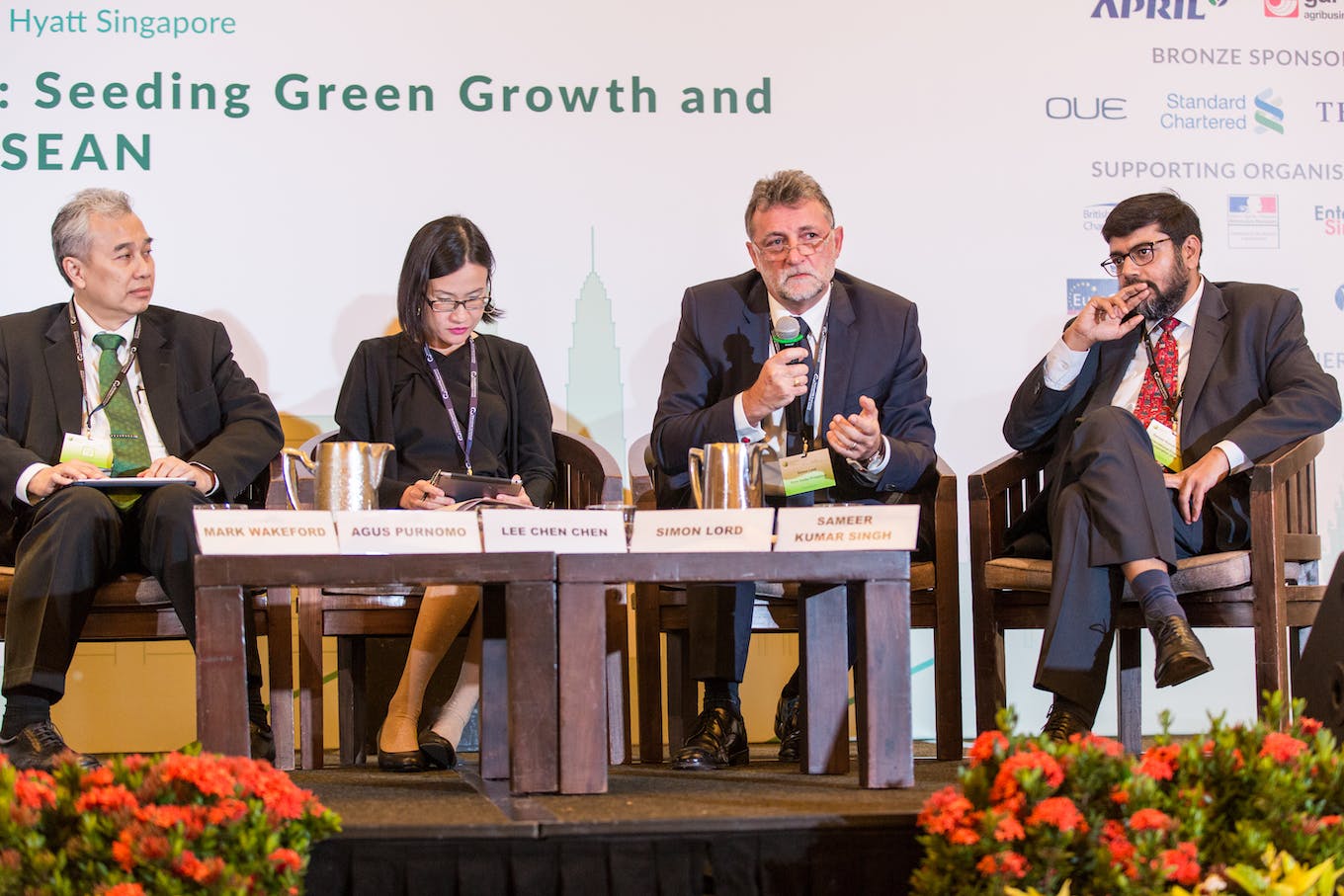 Lord speaking at the 5th Singapore Dialogue on Sustainable World Resources. “Sometimes we confuse the fact that palm oil has got issues with the fact that nobody else has,” he says. Image: SIIA

What do you make of the idea that there is no such thing as sustainable palm oil?

RSPO, which has been around for 10 years, can be improved, has been improved, and needs to improve more—but at the same time has given the industry a level of transparency not seen in other crops. The reporting, verification, and auditing means that the issues are in plain sight—we are not trying to hide them. You don’t have the same rigour in soy, and you certainly don’t have any rigour in cattle rearing, which is the biggest driver of deforestation.

My job is to police an area the size of Brunei. At no time can I put my hand on my heart and say, there is not something going wrong, somewhere.

What measures is Sime Darby Plantation taking to cope with climate change?

There is nothing new in climate change. We have been aware of it for a very long time. But I think the industry has taken a long time to think through the ramifications for palm oil. And in that sense, I don’t think it’s being fully prepared.

Drought obviously affects the productivity of the crop, but also affects the workers in the plantation who do the hardest work—the pollinating weevil. We have strong evidence now that photosynthesis is also affected by climate change. And so you have to build resilience into your infrastructure, and not just look at the crop.

We are seeing high levels of rainfall in very small periods of time, and that is just as damaging to the palm oil industry as drought, as it affects the roads and access to the plantations.

For when drought hits, we have built more than a thousand reservoirs inside of our plantations which capture water without taking it away from other catchment areas; for example, the main streams that feed communities.

We also ensure we have a cover crop in place that doesn’t just hold nitrogen and therefore reduce our reliance on inorganic fertilisers, but also produces leaf mulch which serves as a water retention method and to improve the soil.

Drought in Indonesia has blighted the palm oil industry and has led to peatland fires and the regional haze. What is Sime Darby Plantation doing to address the issue?

People have been burning in Indonesia and parts of Malaysia for as long as I’ve been in the industry – 30 years. You have to eradicate it systemically. But you can’t do it as a single company. Sime Darby, along with several other companies, helped form the Fire Free Alliance, because education and awareness that burning as a method of clearing land is not acceptable, and is contributing to climate change, is crucial.

Sime Darby Plantation introduced a human rights charter in 2016. How happy are you with the progress to improve human rights at the company, and where do you see the major challenges in getting the company where you want it to be?

I am never really happy with our performance, ever, and I would never say we are sustainable. Future generations are the ones who will look back and judge us on that. The best I can do today is to make sure that Sime Darby follows an ethical and moral tract of responsibility.

And the most difficult area is in human rights—embedded practices, foreign workers, child labour in the smallholder sector, gender equality, even occupational health and safety are all human rights issues, and I’m never 100 per cent happy with the speed at which we are travelling.

Bringing the whole organisation on broad is crucial. My job is to police an area the size of Brunei. At no time can I put my hand on my heart and say, there is not something going wrong, somewhere. People can make mistakes—and it takes time to eradicate that from any organisation.

There is a whole raft of new legislation coming through around the UK’s Modern Day Slavery Act that will apply in France, the Netherlands, and Australia. That will put in place a legislative framework that global companies will have to adhere to.

But compliance isn’t the only thing. You have to be constantly improving. Passport retention is an example. We don’t retain passports anymore. To work as a foreign worker in Malaysia, there are all kinds of bribery and corruption that can occur in the labour supply chain, for example facilitation payments to get a job. We have walked back through our supply chain to eradicate the potential cycles of poverty that could trap foreign workers.

At the senior management level, how do you ensure accountability to the Human Rights Charter, given the huge scale of your operations?

We embed it into formal business practices and weave it into performance indicators. Sustainability isn’t a department that sits in the corner; it has to be part of everything we do. We have a senior executive board, and I sit at every senior meeting, and my people sit at other meetings to ensure that the voice of what we are trying to achieve is heard at the top level. I haven’t found a better way, and I am still trying to convince people that sustainability is future-proofing our business.