Green buildings do not only make cities healthier environments to live in, they save money. So why have so many of the region’s cities been slow to embrace sustainable thinking, delegates wondered at a recent event in Malaysia.

Green buildings are good for the environment and ultimately save the construction business a lot of money. So why are so few buildings piercing Asian skylines with sustainability in mind?

According to a report by Research and Markets, the number of green buildings doubles every three years, and the global green buildings market is expected to grow at a compound annual growth rate of 13 per cent between 2015 and 2020. The green buildings solutions market is billed to be worth US$364 billion by 2022.

However, the report found that while major European cities such as Paris and London had a high percentage of green buildings (64 per cent and 68 per cent, respectively), Asian cities were only just making the switch.

Only Singapore has a relatively high penetration (30 per cent) of green buildings. Beijing (11 per cent), Shanghai (15 per cent), Tokyo (8 per cent) and Hong Kong (4 per cent) are playing catch up.

At the Green Buildings & Parks World 2017 conference in Kuala Lumpur in January, delegates debated why Asia’s construction industry has been so slow to make the transition.

Ruben Langbroek, Asia Pacific head of sustainability consultancy GRESB, tells Eco-Business that a “short-term investment focus” in many Asian real estate markets is a key factor, as is a low level of awareness of the benefits of green buildings.

The benefits of green buildings include improving the health of occupants and boosting productivity, the economic return of premises that have reduced operational expenses, and the environmental benefits of lower greenhouse gas emissions, water use and waste.

But since awareness of these benefits has been low, so the industry has been reluctant to pay the upfront costs required to build a green building or convert an old one, says Dr Stellios Plainiotis, chief executive officer of environmental design and engineering consultancy Neapoli.

The green buildings market in Asia has only recently moved out of the “push phase”, he says, when it was led primarily by government regulation rather than market demand.

But as adoption accelerates, particularly in fast growing Southeast Asian markets such as Singapore, Malaysia and Thailand, so the need for government interference will diminish, he says.

What is needed now, says Dr Plainiotis, is for certifiers to get better at marketing green building labels to end users and real estate firms to speed up the rate of adoption.

As Dr Jason Byrne, associate professor, Urban & Environmental Planning, at Griffith University’s School of Environment in Australia points out, constructing new green buildings will only cut a fraction of cities’ water and energy use.

“More than two-thirds of the buildings that will exist by the middle of this century have already been built in most cities, so the critical issue is how to get people to retrofit existing buildings, he says.

Delegates at the conference in Malaysia also pointed out that the biggest obstacle to adoption is the perception that green buildings are prohibitively expensive.

Pick of the list was a light shelf. It is a horizontally positioned sunshade with a reflective upper face fixed to the outside of a building, below the top of a window. The idea is that the sunshade stops the warming effect of direct sun rays entering the room, but reflects sunlight back towards the ceiling of the room and hence into its interior. 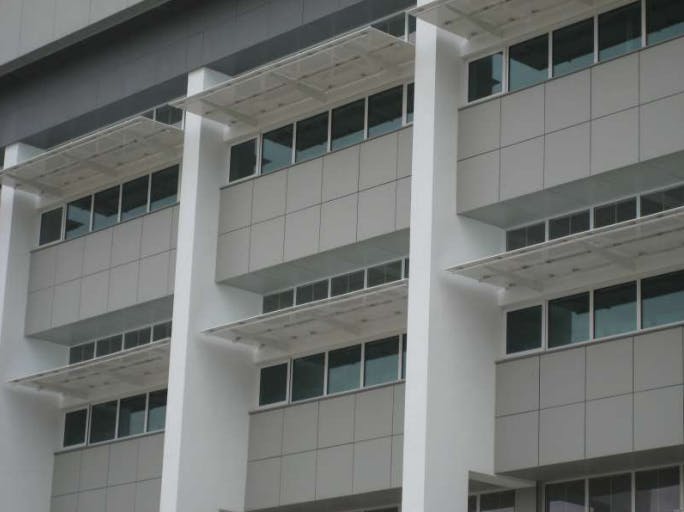 Unlike with Venetian blinds, the horizontal position means that the room still has a view and does not require artificial lighting.

Another simple solution from Moses’ list was for natural ventilation. She showed that if apartment building windows on the same wall are hinged to open in opposite directions, there is a resulting 425 per cent increase in windflow, compared with if they both open on the same side. All condominium windows should be made to incorporate opposing hinges on the same wall to create airier living spaces, she suggested.

The idea that construction firms are only interested in cost, and less so in lengthening the life cycle of buildings was another point of contention that surfaced at the event.

The idea behind life cycle assessment is that a building has a lifespan of several decades during which it goes through several phases: from resource extraction through to construction, occupancy, demolition and the disposal of the materials.

The power of parks 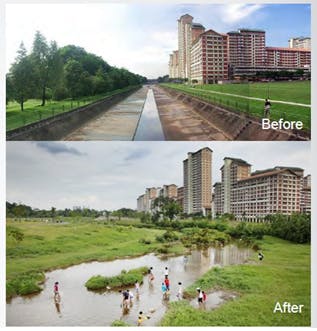 Singapore’s Bishan Park: An old concrete lined-canal was remodelled into a accessible river with full hydraulics

What about parks? Dr Byrne of Griffith University highlighted its key role in urban sustainability and its cooling effects on cities.

He noted that a one-degree Celsius increase in temperature over 29 degrees Celsius in a city can increase mortality rates by two to four per cent among the population as a whole, with the elderly particularly at risk.

Concrete buildings, roads and the infrastructure of large cities have a tendency to absorb sunlight and raise temperatures, a phenomenon known as the urban island effect.

Green areas such as parks, rivers and wooded areas, besides making an area more attractive, tend to cool cities down.

Speaking on the same panel as Byrne was Henry Steed, Singapore-based design director for architectural company ICN Design International. Steed showed a selection of before-and-after pictures of how Singapore’s storm drainage areas had been beautified through a combination of careful planning and some greenery.

The consensus among speakers was that greening does not have to be expensive, but it does have to be better communicated. As Byrne says: “We need to make it easier to access information on green building design and operation. Where they can it be sourced, and how price-competitive is it?”

“If we have government-approved sites that make it easier for developers and building renovators to find and source green buildings-related materials - combined with easy pay-back calculators showing clients the potential savings over time, then we will be more likely to see better uptake of green buildings,” he says.