Why does Singapore's $235 billion investment giant care about sustainability?

It may come as a surprise that Temasek, a Singapore government-owned investment company, has invested so much time, money and energy in sustainability. This is because caring about social and environmental issues makes good business sense, the company's sustainability chief Robin Hu tells Eco-Business.

Indifference to existential crises such as global warming, rising sea levels and the destruction of the natural world cannot be justified, said Robin Hu, Head, Sustainability & Stewardship Group, Temasek, in a sobering closing speech at the Ecosperity conference earlier this month.

So why is it, Hu asked his audience of 1,000 government and business delegates, that humanity isn’t responding with urgency to the biggest challenges of our time?

It could be because we don’t believe there’s enough evidence to prove that these calamities are actually happening, or we don’t have faith in the evidence, he said. Or we think we can’t do anything about it, or simply don’t know how. Or we think it’s someone else’s job, said Hu.

It might come as a surprise that a former media executive working at a US$235 billion government-owned investment giant shows so much concern for the environment.

But, as the former Chief Executive Officer of South China Morning Post explained, it is companies which put the future of the planet at the core of their business that will have a better chance of growth over the long term.

If the planet and people are not cared for, there will be “nothing left for us to invest in,” he said.

It’s not like Temasek has a formula for sustainability success that we prescribe to our portfolio companies. We don’t tell other companies what to do.

In this interview with Eco-Business, Hu talks about how much influence Temasek has over the sustainability of the companies that it is invested in, whether Asian businesses are responding to the climate crisis fast enough, and how he leads a sustainable lifestyle.

Temasek exists to accumulate wealth for future generations of Singaporeans. So that makes us an investor for the long term. Clearly we would not invest for short term gains at the cost of destroying the Earth. That would mean that there would be nothing left for us to invest in, and our primary reason for being would be a nonstarter.

The same is true of the social side of sustainability. If we are successful financially but the societies we invest in are failing in front of our eyes, then the marketplace becomes unsustainable over the longer term.

When the United Nations launched the Sustainable Development Goals (SDGs), we embraced the SDGs, not just because of our shared values, but because of their untapped business potential (according to the 2017 report Better Business, Better World report, achieving the SDGs by 2030 presents US$5 trillion of business opportunities just in Asia alone).

To what extent can Temasek influence the companies it is invested in, for instance DBS Bank, which recently announced a retreat from coal financing after pressure from NGOs, and agribusiness giant Olam, which has also been the subject to NGO pressure over links to deforestation in Africa, to run environmentally and socially sustainable businesses?

It’s not like Temasek has a formula for sustainability success that we prescribe to our portfolio companies. We don’t tell other companies what to do. They are governed by their own boards, and they have their own management.

What we can do is create a platform for peer learning and advancing knowledge, so companies can recognise the value and importance of sustainability. Through a platform like Ecosperity innovation can meet investment. It’s not just about listening to the speakers at the conference. It’s about meeting other people who are sharing similar journeys and learning from them. 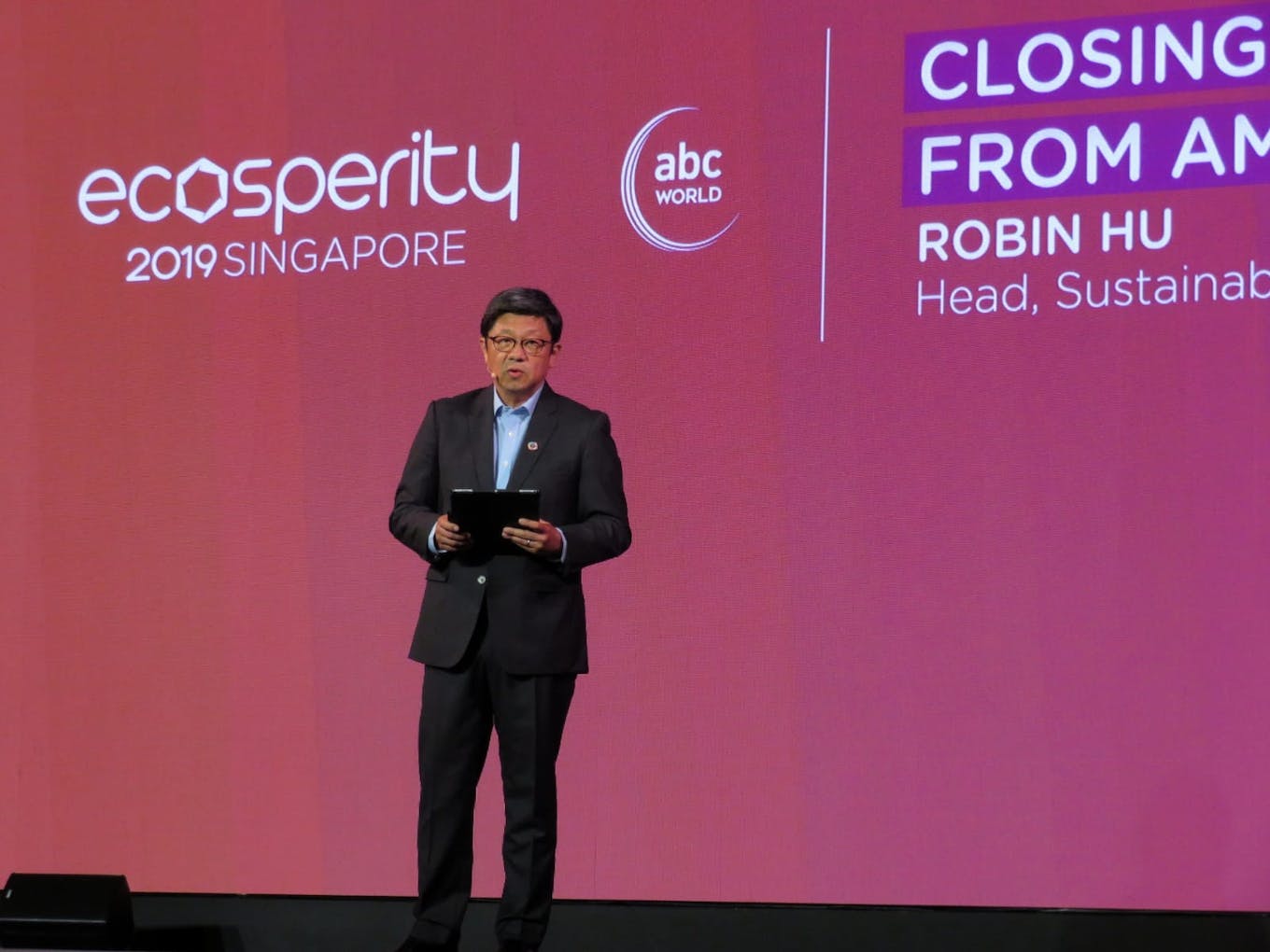 Do you think that the business and investment community in Asia is moving fast enough to help the region transition to clean energy and the circular economy?

We all know that time is what we don’t have. If you think of it in those terms, then nobody is moving fast enough. We can speed things up and accelerate change. But the question is, are we building up sufficient momentum now? To do that, we need capital, policy, civic society, and discerning and demanding consumers working together.

And individual actions matter. You’ll find that if you build connections, you’ll realise that the picture is not as dark as you think. People in your network will become your sources of energy and inspiration. Whether it’s driving less, eating more vegetables and less meat, or dropping that taxi ride and walking instead, whatever lifestyle changes you can make, make them. And whatever your company can do better, push for change. If your company is not embracing any of the SDGs, why not?

Having been vegetarian for a few years now, I tried a plant-based Impossible Burger recently and it blew my mind. What do you see as the most exciting investment areas in sustainability right now?

Sustainable living is an investment trend that holds many opportunities. We think that the alternative protein sector is going to be a crucial opportunity, given the carbon emissions and resource intensity associated with meat production.

Another is agriculture technologies. Food production methods have not evolved significantly for hundreds of years, and will have to change to feed a growing global population. So investments in areas such as vertical farming and aquaculture are increasingly exciting.

As for new forms of energy, hydrogen is an interesting new option, as is nuclear fusion, which is clean, almost infinite in supply and does not produce much waste.

In what ways do you try to lead a sustainable lifestyle?

I’ve stopped driving. I’m an active consumer of ride-hailing apps, which I use every day, and I take public transport a great deal. I still have a car. My wife drives it. I have not yet succeeded in convincing her that she can do without it.