Green groups and Olam at loggerheads over deforestation

Environmental campaigners and agribusiness giant Olam have clashed over claims that Olam is destroying rainforests in Gabon and allowing its palm oil suppliers in Asia to do the same until 2020.

A new investigation by environmental campaigners in the United States and Gabon has claimed that Singapore-listed agribusiness giant Olam is driving rainforest destruction in Africa as well as Southeast Asia.

Olam on Monday released a statement vehemently refuting allegations that it has destroyed ecologically valuable forest for oil palm development, and reiterating the role of its operations in alleviating poverty and promoting development in the Central African country.

In response to criticism by Mighty and Brainforest that Olam was creating a “black box” for unethical palm oil growers to sell deforestation-linked palm oil, the company also released a list of all its suppliers.

The report, which was produced through supply chain analysis and on-the-ground investigations, alleged that the company has cleared some 20,000 hectares of rainforest in Gabon since 2012, in order to set up Africa’s largest palm oil plantations. These forests are home to threatened keystone species such as gorillas, chimpanzees, and elephants.

Using video footage of bulldozers clearing large trees in Gabon, campaigners said that Olam does not have a “zero deforestation” policy unlike its competitors such as Singapore-based firms Wilmar, Golden Agri Resources and Musim Mas.

While much of the palm oil industry uses the High Carbon Stock Approach methodology to identify forest areas suitable for clearing, Olam does not. Instead, it argues for a more “contextual” intepretation of what constitutes an ecologically valuable area.

Mighty’s report said that Olam’s Gabon operations also undermine the commitment it has made to the Forest Stewardship Council, the certification body for sustainable forest products.

To obtain FSC certification for logging concessions in the Republic of Congo, the company is required to make a group-level pledge to avoid “unacceptable forest activities”, and refrain from clearing more than 10,000 hectares of forest over a five-year period.

“Olam’s customers, investors, and the general public have to compel the company to change and align its standards with industry best practices for sustainability and social responsibility,” said the report.

In its response, Olam maintained that all plantation development in Gabon had taken place on degraded forest land, or savannah landscapes—not pristine rainforest. It insisted that areas for land clearing had been identified in conjunction with local communities, NGOs and experts.

Sunny Verghese, Olam’s co-founder and group chief executive officer of Olam International, added: “Gabon has a right and an essential need to develop its agriculture sector to diversify its economy, improve food security to feed its people and create new livelihood opportunities, while also protecting its natural forests.”

Olam’s work in Gabon contributes to each of these objectives, said Verghese. While the company has developed some 44,000 hectares of plantations in the country to date, it has also conserved 55,000 hectares of land with a high conservation value, and taken measures such as building wildlife corridors in these areas, he added.

Established in Nigeria in 1989, Olam was incorporated in Singapore in 1995 and has since grown into a multimillion dollar conglomerate that deals in food and agriculture commodities including palm oil, cocoa, rice, cotton, spices, fertilisers, and rubber. The company reported S$346.2 million in profit last year.

In 2015, Olam produced about 1,000 tonnes of palm oil related products such as palm oil, palm kernel oil, and palm kernels. However, the total volume of all palm oil and palm oil derived products it processed or traded in 2015 was 1.5 million tonnes—or about 2.5 per cent of all global palm oil. This means that almost all of the palm oil traded by Olam comes from third party suppliers.

The company began operating in Gabon in 2011, choosing the African nation for its “soil, agro-climatic conditions and strong governance framework“. Its operations in the country are conducted through a joint venture with the Republic’s government, and the company has a landbank of 300,000 hectares, more than four times the total area of Singapore.

It plans to use 128,000 ha of this land for palm plantations, and has already developed some 50,000 ha of plantations and three processing facilities.

Verghese’s views were echoed by Gabon’s agriculture minister Yves Fernand Manfoumbi, who said that through the public private partneship, the government and Olam “are working to create jobs for rural people, diversify the economy of Gabon and contribute to global food security”.

“In doing so we are able to formalise rural land tenure, raise incomes, invest in fencing to protect crops from elephants and reduce carbon dioxide emissions from shifting cultivation 10-fold,” added Manfoumbi. 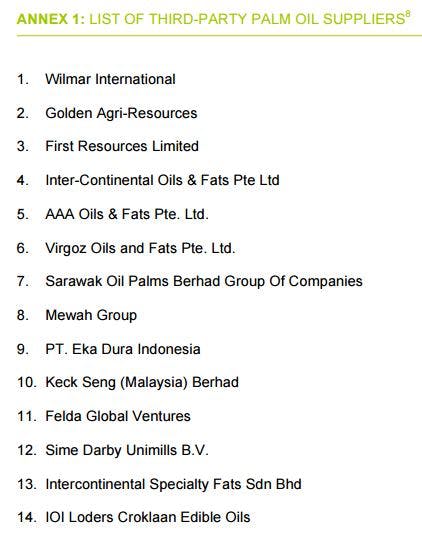 In their report, Mighty and Brainforest also took aim at Olam’s lack of transparency. At the time of the report’s writing, the company had not disclosed the names of its suppliers, nor the locations of their mills or concessions.

Etelle Higonnet, campaign and legal director, Mighty, noted that that this lack of transparency has allowed Olam to operate a “giant black box” of palm oil from unknown sources in Indonesia and Malaysia, who could be engaging in deforestation due to the anonymity offered by Olam’s reticence about its supply chain.

In Indonesia and Malaysia, the palm oil industry has been a major driver of deforestation and land burning in recent decades.

As a result of practices such as draining peat soils to set up plantations, and burning land to remove vegetation, Southeast Asia is often plagued by a choking haze, which causes billions in economic losses, massive spikes in greenhouse gas emissions as well as deaths related to air pollution.

Not only was the company failing to demonstrate the same sustainability and transparency standards as its competitors, but Temasek’s role in financing the company also means that Singaporeans are unwittingly contributing to deforestation and the haze, said campaigners. They pointed out that Olam’s customers, which include consumer brands such as Pepsico, Unilever, Mondelez and Nestle, are also complicit.

In a statement, Temasek said that its subsidiary’s operations are “matters for the board and management of Olam to address. As a matter of proper governance, Temasek does not direct the business operations of our portfolio companies, including Olam.”

“We have stated openly and in many forums, that we fully support no burn policies for land clearance, and would urge oil palm companies and plantation owners to do the same,” added Temasek.

That’s like waving a green flag at rogue palm oil companies telling them to get as much deforestation as possible done now—before the deadline.

In response to the report, Olam immediately released its list of suppliers, and said that it would “happily” make its own concession boundary maps public, as well as encourage its suppliers to do the same. Olam has since 2014 whittled down its supplier list from 48 to 14 firms today.

Of these, 11 firms have signed Olam’s supplier code, while three companies which have not signed the code have “robust traceability codes in line with (Olam’s) principles”, according to Olam.

Verghese, in a press call on Monday, said that the company did not make its supplier list public until today because it was in the process of “vetting and verifying” that each of the mills that supplies to Olam complies with the company’s sustainability policies.

The company would have released the names during an interim update in March next year, but “given the report, we are happy to put the list in the public domain now,” he said.

In the view of campaigners, such as Mighty’s Higonnet, “that’s like waving a green flag at rogue palm oil companies telling them to get as much deforestation as possible done now—before the deadline.”

However, Verghese stressed that the 2020 deadline is for verification that Olam’s supply chain is sustainable, not for supplier compliance to Olam’s sustainable palm oil policy and Supplier Code.

“It doesn’t mean that the people we are buying from now can wait till 2020 to comply; compliance is immediate,” stressed Verghese. “Verification and vetting will need more time, especially because we also want to get third party confirmation”.

Olam is already working with Washington-based think tank World Resources Institute to assess its mills for environmental sourcing, so that it can effectively engage its suppliers on sustainable sourcing issues. It will publish another update early next year.

Any supplier found to be violating either of Olam’s sustainability policies will be terminated, added the company.

Jean-Paul Pinard, chairman of Olam’s Corporate Responsibility & Sustainability (CR&S) Board Committee, said: “We are also committed to achieving end-to-end sustainable supply chains, which is a complex and challenging task where palm oil is concerned.”

“I will encourage Olam’s management team to continue to improve our policies and their execution, and work with our suppliers and stakeholders to ensure the integrity of all our supply chains,” he added.