What to read, watch and listen to this Earth Day

This Earth Day will see the launch of a campaign calling for greater environmental and climate literacy, and thousands of scientists marching for fact-based governance. Here's everything you need to boost your environmental knowledge.

Earth Day, which rolls around on April 22 every year, is a key date on environmentalist’s calendars globally and widely regarded as the event that sparked the modern environmental movement.

The first Earth Day, held in the United States in 1970, aimed to galvanise political, media, and public support for the fight against pollution, wildlife loss, and unsustainable development. Almost 50 years later, the movement has spread to nearly 200 countries worldwide, and amassed more than 50,000 partners and 1 billion participants annually.

It has also been associated with some major environmental milestones, from the establishment of the US Environmental Protection Agency in 1970 to a ceremony to sign the Paris Agreement on climate change last year.

This year’s Earth Day is no different. It will coincide with the world’s first ever March for Science, where scientists in Washington DC and almost 500 cities around the world will participate in public demonstrations calling for the importance of science for health, safety, as well as political and economic stability.

At the same time, the Earth Day Network is launching a three-year campaign focusing on environmental and climate literacy, with the goal that every student around the world graduates high school with a sound knowledge of environmental issues.

Kathleen Rogers, president of the Earth Day Network, said in a statement: “We need to build a global citizenry fluent in the concepts of climate change and aware of its unprecedented threat to our planet.”

A big feature of this year’s Earth Day will be community events called “teach-ins”, or lectures and discussion on environmental topics. Community members are encouraged, and provided with guidelines on how to invite environment, politics, and science experts to speak on environmental issues.

But if you can’t organise or attend a teach-in; or participate in one of the many March for Science events happening globally, here’s a list of things you can watch, listen to, and read to learn more about the world’s most pressing challenges, and how to make a difference.

1. Naomi Klein - This Changes Everything
Naomi Klein’s This Changes Everything, published in 2014, is essential reading for the climate movement today. Klein takes on capitalism and the fossil fuel industry, and presents a clear vision of how to “change everything” about the economy, government, and communities in order to avoid dangerous climate change.

2. Naomi Oreskes & Eric M Conway - Merchants of Doubt
With a climate denier occupying the world’s most powerful political office and the very real threat that Donald Trump’s environmental policies pose to the world, understanding the motivations of those who claim climate change isn’t real has never been more important. Merchants of Doubt, a 2010 book by science historians Naomi Oreskes and Erik M Conway, explores how prominent American scientists, influenced by policy and industry connections, have promoted climate denial.

4. Mark Lynas - Six Degrees
The vast majority of the world that accepts climate science, meanwhile, is united behind the goal of keeping a global temperature rise to well below two degrees Celsius above pre-industrial levels and aims to limit this to 1.5 degrees Celsius. But what do these numbers really mean, and what’s at stake if the agreement fails? Six Degrees by Mark Lynas, published in 2007, breaks down what each degree of warming spells for humanity, analysing credible climate science in accessible, eye-opening prose.

1. Warm Regards
The cleverly titled Warm Regards podcast features a meteorologist, paleoecologist, and a veteran journalist discussing scientific, political, and sociological issues such as climate forensics and the impact of a ‘post-facts’ world on climate action.

2. Climate One
Meanwhile, The Commonwealth Club, a California-based non-profit group, brings together business, government and civil society leaders to discuss how the world can achieve a low-carbon economy in the Climate One podcast. Check out their latest episodes on the link between tobacco and climate denial and how to engage teenagers in the climate fight, or browse through their catalogue of more than 250 episodes for more on all things climate and environment.

2. Before the Flood
Also heavy on star power is Leonardo DiCaprio’s 2016 documentary Before the Flood, which in addition to being co-produced and narrated by the Hollywood celebrity features interviews with Barack Obama and Pope Francis, and other global climate experts on the scale of the climate crisis, and how to fix it.

3. TED Talk: Johan Rockstrom
If you only have time for a quick watch, Swedish environmental professor Johan Rockstrom’s TED Talk is a fast-talking, whirlwind tour of nine ‘planetary boundaries’—that is, key geographical and ecological indicators—that are at risk of being crossed, and how to prevent irreversible damage.

4. TED Talk: Mary Robinson
Meanwhile, former Irish president and UN Human Rights Commissioner Mary Robinson’s TED Talk is a compelling overview of why climate change is a fundamentally an issue of justice and human rights issue, and an inspiring call to action.

1. Our World in Data
For those who think in numbers, Our World in Data is a web initiative by Oxford University’s Oxford Martin School—headed by former United Nations Environment Programme head Achim Steiner—that collates data on environmental, economic and demographic indicators. Check it out for quantitative insights into everything from air pollution to income inequality to social attitudes like trust, optimism and pessimism.

2. NASA’s climate apps
There are also a whole range of mobile apps available to help people learn more about climate and environmental issues, access facts on the go, and take action. Start with the National Aeronautics and Space Administration (NASA)’s Earth Now and Images of Change apps, which display real-time global satellite data and before-and-after photos of human impact on the planet respectively. 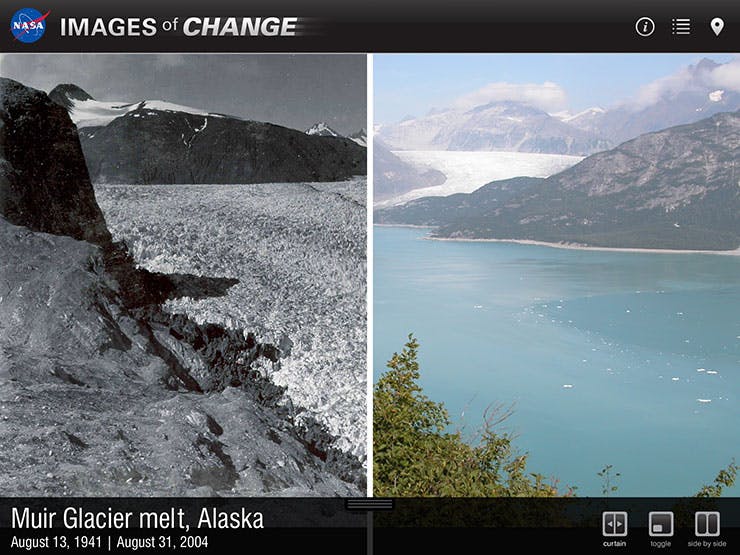 A screenshot from Nasa’s Images of Change app. Image: Nasa

3. Defeating climate skeptics
Use the Skeptical Science app to deal with the climate deniers in your life; it lists the most commonly used climate denial arguments, along with a comprehensive overview of the scientific facts.

4. Apps to green your life
There are also plenty of apps to help reduce your environmental footprint, ranging from GoodGuide and the Cheyenne Mountain Zoo’s Sustainable Palm Oil app to help you shop more responsibly to the newly launched Cool Off to reduce energy wastage from air conditioning.