What are the world's biggest plastic polluters doing about the problem?

This Earth Day focuses on plastic pollution. Eco-Business highlights what the biggest marine polluters are doing to stem the flow of plastic waste.

From plastic bottles and instant coffee sachets to shampoo and toothpaste packs, lightweight plastics have been clogging drains and polluting public spaces at a rate of one truckload entering the ocean every minute.

In response, this year’s Earth Day is dedicated to mobilising the world to end plastic pollution, by launching a multi-year campaign to curb consumption of single-use plastics.

Earth Day, which is celebrated every year on April 22, marks the anniversary of the birth of the modern environmental movement, when millions protested against the negative impacts of industrial development in the United States and around the world almost 48 years ago.

It is now a global annual event with more than 1 billion people in 192 countries taking part in the world’s largest civic-focused day of action.

Part of the campaign is a petition for world leaders to ban single-use plastics and support a move to sustainable non-polluting, non-fossil fuel based alternatives. It also calls for corporations to take responsibility for the production of throwaway plastic packaging.

Ahead of Earth Day, environmental group Greenpeace has launched a campaign to pressure corporations to reduce their massive single-use plastic footprints.

“This Earth Day, Greenpeace is looking to shift the narrative around single-use plastics from one of individual responsibility toward corporations reducing their production of throwaway plastic packaging,” it said in a statement.

In a plastic waste study of coastal areas in the Philippines, Indonesia, Taiwan, and United States led by Greenpeace in September last year, global brands Nestle, Unilever, Coca Cola, Pepsico, and Procter & Gamble were revealed to be among the biggest plastic polluters. Since then, these companies have pledged to step up their efforts to cut down on plastics. Eco-Business takes a look at what they’re doing to clean up their acts.

The Swiss food and beverage company features consistently in cleanups and brand audits globally. But early this month, it joined 11 other leading brands that had previously committed to make all of their packaging recyclable or re-usable by 2025.

On its website, it said it will do this by eliminating non-recyclable plastics, encouraging the use of plastics that allow for better recycling rates, and eliminate or change complex combinations of packaging materials.

Although Nestle’s new plastics plan was criticised by Greenpeace for having unclear targets, the company maintained that its policy is a big step forward to tackling the problem, and promised to provide regular public updates on its progress.

The consumer goods giant has long been pushing for more circular production processes, including how it manages plastic packaging.

Last year, it developed new technology called CreaSolve which can recycle used sachets and channel them back into the supply chain.

The company is also looking at new ways to recycle PET (Polyethylene terephthalate), a plastic that is widely used in packaging. It wants to be able to turn any type of PET waste into pure, clean, transparent PET plastic that can be used for food packaging. The technology is expected to be ready by late 2019.

A year before Nestlé, Unilever pledged to use 100 per cent reusable, recyclable or compostable plastic packaging by 2025.

The beverage company announced in January this year that it would collect and recycle the equivalent of every can or bottle it sells by 2030.

Dubbed the “World Without Waste” initiative, it aims to examine the entire packaging lifecycle, from how bottles and cans are designed and made, to how they’re recycled and repurposed.

“To assume that if we get rid of plastic bottles and cans that life will be better…this mistakenly ignores all the good they can do,” wrote Coca-Cola chief executive officer James Quincey in a blog post. “Modern food and beverage containers help reduce food spoilage and waste; bottles and cans can benefit society if they’re designed properly and disposed of responsibly.”

Coca-Cola, which uses 120 billion bottles annually, said its 100 per cent recycling initiative focuses mainly on its plastic bottles and aluminium cans, which make up 85 per cent of its product packaging. But the company plans to extend the programme to other types of packaging, and packaging from other companies.

However, this plastics plan was criticised by Greenpeace for failing to reduce the amount of plastic it produces as a better solution.

In November last year, a fisherman in the waters off Grand Manan, New Brunswick in Canada, caught a lobster with a Pepsi logo tattooed on its claw. How the logo got there baffled observers, but highlighted the extent of plastic pollution in our oceans.

Pepsico has made the same commitment that 11 leading brands have made to fight plastic pollution.

On its website, it said that it will strive to “design 100 per cent of our packaging to be recyclable, compostable or biodegradable, increase recycled materials in our plastic packaging, reduce packaging’s carbon impact, and work to increase recycling rates.”

The company is also involved in the New Plastics Economy initiative, led by the Ellen MacArthur Foundation, which challenges stakeholders to rethink and redesign packaging.

Its sustainability report states that it is working with biotechnology leader Danimer Scientific on developing bio-based compostable packaging for its snack brands and converting its labels to recyclable material on Gatorade and Lipton Pure Leaf products. 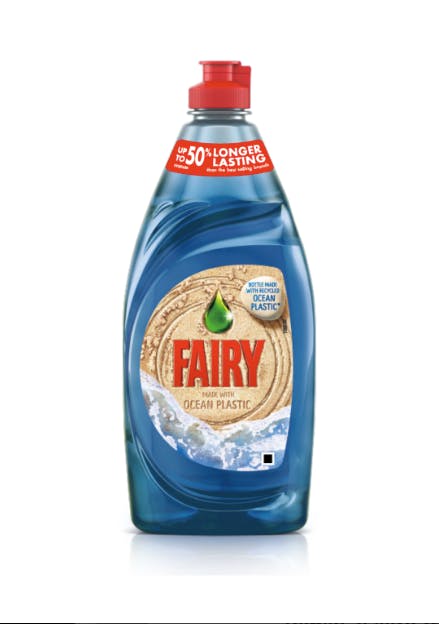 The Fairy Ocean Plastic Bottle is made from 10 per cent ocean plastic, and 90 per cent post-consumer recycled plastic. Image: Procter & Gamble

The firm also intends to achieve zero consumer and manufacturing waste to landfills as well as use 100 per cent renewable or recycled materials for all products and packaging.

In October of the same year, the consumer giant launched the Fairy Ocean Plastic bottle made from 100 per cent post-consumer recycled (PRC) and ocean plastic in a bid to raise awareness about plastic pollution.

The company aims to ensure all incoming production materials are either converted into finished products, recycled or re-used in other ways through partnerships similar to the one in place with US-based recycling specialist TerraCycle, which helped create the Fairy Ocean Plastic bottle.

Procter & Gamble says it has already met its zero waste goals in 19 countries, including the United Kingdom, Germany and Indonesia, and claims to be approaching the 100 per cent target in two of its largest manufacturing hubs, China and India.