Some rare good news for Indonesia's forests: For the first time, West Papua has handed over 3,000 hectares of forest to indigenous communities, who plan to big agribusiness out, and harvest products from forests without cutting them down.

In an unprecedented move for Indonesia’s Papua province, the district government on Thursday gave indigenous communities control of state forests, which grants villagers the right to reject the advances of palm oil, logging and pulpwood companies in favour of pursuing alternative, deforestation-free livelihoods.

In a ceremony performed in West Papua’s capital Teminabuan, representatives from the Province of West Papua handed over a 3,545 hectare area of rainforest to leaders from Manggroholo and Sira villages, in an area known as the Knasaimos indigenous territory.

The scheme in Papua will see Manggroholo and Sira villagers managing 1,695 hectares and 1,850 hectares of land respectively, for an initial lease period of 35 years.

The land under the villagers’ control sits in the wider Knasaimos indigenous territory, an 81,646 ha swathe of land in Papua that has historically been exploited by illegal loggers and is now being eyed by oil palm companies.

Map of South Sorong province in West Papua, Indonesia, where the Manggroholo and Sira villages are located. Image: Google Maps

The move by the West Papua government comes about three years after Indonesian President Joko Widodo in 2014 promised to hand over 12.7 million hectares of forest land for community forestry uses.

Papua’s forests have also made global headlines recently when campaigners exposed the destructive practices of Korean-Indonesian conglomerate Korindo and Korean palm oil firm Posco Daewoo in the region. More recently, the Province of Papua pledged to protect 83 per cent of its land areas as natural habitat.

Manggroholo and Sira community leaders welcomed the handover of control, and said they intended to protect the forest from deforestation by logging, palm oil, and pulpwood activities.

Fredrick Sagisolo, head of the Knasaimos Tribal Council, said in a statement that “this is a victory not just for residents of Sira and Manggroholo villages, but for everyone, especially here in Papua where much forest remains”.

“Forest protection is vital to secure the future of our communities,” added Sagisolo. He shared that the community plans to extend the Village Forest entitlement to every village on Knasaimos land.

Niko Tike, a development and economy expert speaking on behalf of the governor of West Papua, stressed the need to protect forests, and added: “I hope these two villages can become a model for others in driving community forestry in West Papua.”

This is a victory not just for residents of Sira and Manggroholo villages, but for everyone, especially here in Papua where much forest remains.

Illegal loggers exploited the Knasaimos landscape in the early 2000s and exported hundreds of thousands of tonnes of Merbau, a valuable timber species, which was made into luxury flooring for overseas markets. The campaign group Environmental Investigation Agency estimates that for every dollar of flooring sold, communities which collaborated with the industry to clear trees received less than half a cent.

But rather than allowing their land to be developed by agribusiness, the Sira and Manggroholo villages approached environmental campaigners Greenpeace Indonesia and local NGO Bentara Papua, who have since 2008 advocated for them to have control of the land under a Forest Village scheme. 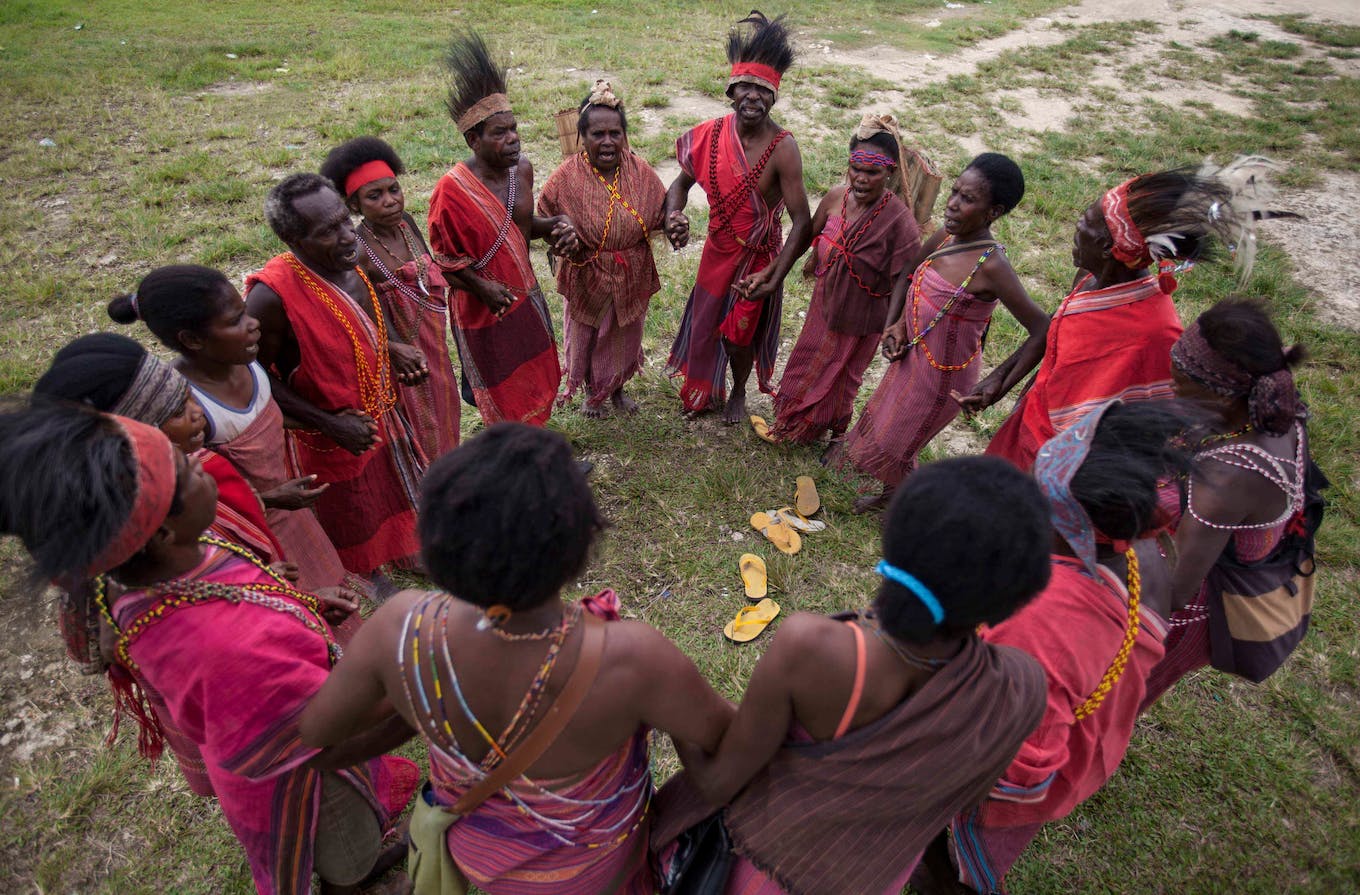 Members of Papua’s Tehiti tribe dance during a ceremony where the West Papuan government handed over control of state forests to indigenous communities in the province. Image: © Jurnasyanto Sukarno / Greenpeace

The NGOs also helped the villagers set up an indigenous association, and worked with them to develop a plan for how to use the land, analyse the forest landscape, and identify deforestation-free but profitable products that the community can harvest.

These include damar resin, which is obtained from trees of the Dipterocarpaceae species, and used to glaze or varnish products; rotan, woody stems of palm trees that are used to make cane furniture and baskets; and gaharu or agarwood, a resin that forms in some evergreen trees when they are infected with mould. It is used to make incense and perfumes.

Kiki Taufik, head of Greenpeace Indonesia’s Forests Campaign, said in a statement that Papuan forests are increasingly succumbing to the palm oil industry’s expansion, and must be protected.

“Greenpeace supports community-based forest management which recognises sovereignty is in the hands of the local people,” said Kiki. “The commitment of the Manggroholo-Sira community is an inspiration to others resisting deforestation in Papua”.