Draft legislation laid before parliament would set the UK’s fifth carbon budget at a 57 per cent emissions cut by 2028-2032, compared to 1990 levels. The move offers a rare point of certainty amid the post-Brexit referendum policy chaos.

Without significant new policy interventions, however, the UK will achieve at most half of the reductions needed between now and 2030, according to the 2016 progress report from the Committee on Climate Change (CCC).

The committee will report on the implications of the vote to leave the EU later this year. Carbon Brief runs through the key details from today’s developments.

The draft Carbon Budget Order 2016 would set the fifth carbon budget at 1.725 million tonnes of CO2 equivalent (MtCO2e), or 57 per cent below 1990 levels. This is in line with the CCC’s advice, although it excludes the UK’s share of international shipping emissions.

The draft order was not passed on 30th June, meaning the government missed the legal deadline of the end of June. However, legal NGO ClientEarth tells Carbon Brief there are unlikely to be any consequences if the delay amounts to just a few days.

The CCC also recommended a change to UK carbon accounting rules, so that actual emissions across the economy are counted towards carbon budgets. The government has not followed this advice. Carbon Brief understands there had been loose plans to revisit these rules later in the year.

If the vote to leave the EU sees the UK leave the EU Emissions Trading System (EU ETS), then the carbon accounting rules will have to be rewritten.

The fifth carbon budget will bring net benefits worth an estimated £5.5bn to the UK in present value terms, according to an impact assessment also published today. This includes costs of around £36bn, largely related to cost in sectors such as transport and buildings.

The budget would bring benefits worth around £41bn in present value terms, the impact assessment says. This is made up of reduced costs from lower energy use of £24bn and avoided climate impacts of £16bn.

In annual terms, the costs would be an estimated £12bn, with benefits worth £13bn.

The impact assessment cautions that “the portfolio of policies to deliver the budget level is unknown at this stage”. Estimated costs and benefits are provided “as an illustration only”. Notably, it assumes that the UK would remain part of the EU Emissions Trading System (EU ETS).

The uncertainty introduced by the vote to leave the EU and its likely knock-on impacts on the cost of financing investments in the UK could be highly consequential. The impact assessment says: “The most significant contributions to the overall costs and benefits [of the fifth carbon budget] are the technology and finance costs of the abatement measures.”

One final twist on carbon budgets is a decision that would allow the UK to use international offsets to meet part of its third carbon budget. This move goes against the CCC’s advice that UK carbon budgets should be met through domestic action alone, unless unexpected circumstances arise.

The draft Climate Change Act (Credit Limit) 2016 Order, also published yesterday, would allow 55MtCO2e of offsets to be counted towards the third carbon budget covering 2018-2022, even though UK emissions are already some 10 per cent below the level needed to meet it.

Over-achievement in one carbon budget period can, at least in theory, be carried forward to future budgets, though the government has avoided using this provision so far.

Recent progress in cutting UK emissions has come “almost exclusively” from the power sector, the CCC’s 2016 progress report says, with transport and buildings emissions both rising. This mirrors Carbon Brief’s analysis of emissions in 2014 and 2015.

The unbalanced progress in decarbonising the economy was already identified by the CCC last year. It says there is an “urgent” need for completely new policy across 15 areas.

These include post-2020 vehicle efficiency standards, a strategy on carbon capture and storage, a plan to limit aviation emissions, policy on how to deploy the cheapest renewables such as onshore wind and solar, as well as contingency planning in case new nuclear schemes are delayed.

There has been a “lack of progress across the board in buildings”, it says. There is “no action plan” for low carbon heat or energy efficiency, where funding cuts mean insulation rates are down 60-90 per cent in 2013-15, compared to progress during 2008-12.

After rising 1 per cent last year, transport emissions now make up the largest share of the UK total. The CCC suggests electric vehicles will need to make up 60 per cent of new sales in 2030.

All told, the gap between existing policy and what will be needed to meet the fifth carbon budget amounts to 100MtCO2e in 2030, the CCC says, around half of the savings needed over the next 15 years. Another 55MtCO2e of savings are at risk due to underfunded or weak policy, it says. 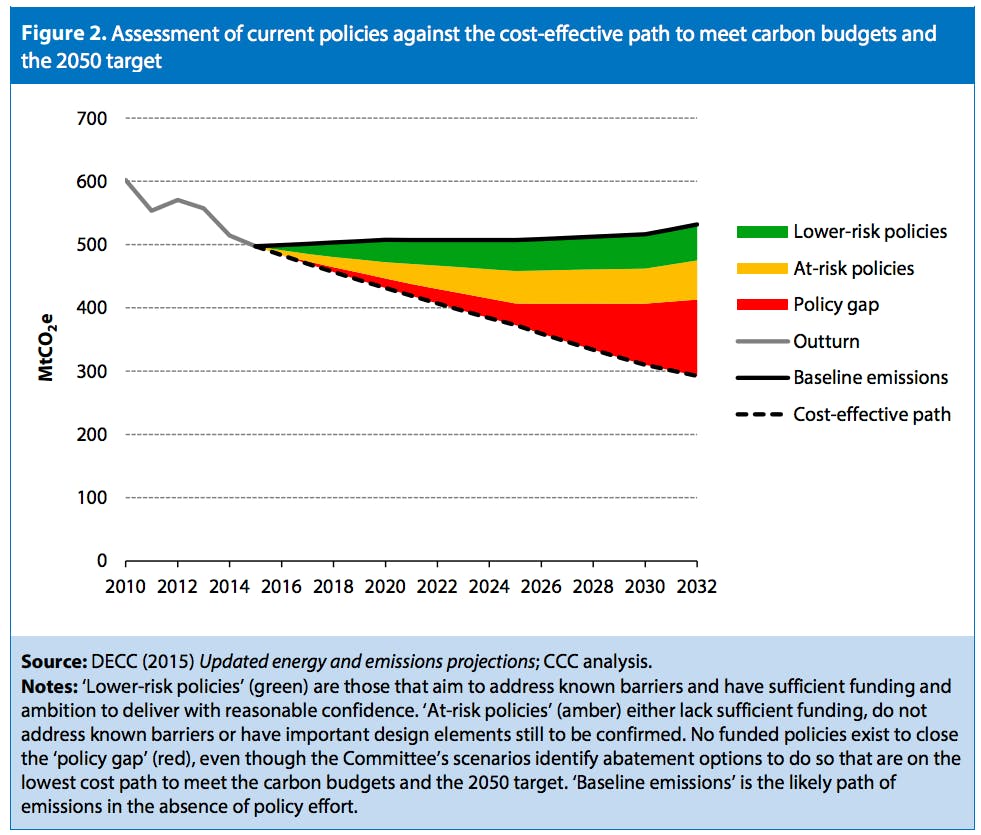 The CCC will publish more detailed advice to government later in 2016. Reports will cover the meaning of the Paris Agreement for the UK’s 2050 carbon target, the implications of Brexit for climate policy and what is needed to meet the fourth and fifth carbon budgets.