Climate change presents a multi-trillion dollar financing opportunity for Asia Pacific. But a new report says the region's institutions must do more to integrate climate policies and opportunities into their operations.

Asia Pacific’s financial institutions have begun to factor climate risks and opportunities into their activities, but they have a long way to go before they can fully unlock the multi-trillion dollar financing opportunity that climate change presents, a new report has found.

Titled ‘Investing for the Climate in Asia’ and released on Tuesday, the study found that while most Asian financiers are setting broad policies on responsible lending and offering green finance products, too few look at climate change as a risk and a reason to limit lending.

The report was commissioned by the Asia Investor Group on Climate Change (AIGCC) — an initiative to create awareness among Asia’s finance sector about climate risks and opportunities — and authored by Singapore firm Asia Research and Engagement.

It was unveiled at an event in Singapore’s Marina Bay Sands, which marked the re-launch of AIGCC. The initiative was started by the Association for Sustainable and Responsible Investment in Asia (Asria) in 2011; but Asria last October merged with the United Nation’s Principles for Responsible Investment to form PRI Asia.

Banks and insurers from each country were selected based on their market capitalisation, while the report’s authors chose domestic investors which were seen as the most influential in the market.

They found that less than a third of all institutions reviewed — 31 per cent — factored climate risks into their financing operations. Potential risks include the physical destruction of assets due to impacts like floods and sea level rise; or regulatory issues such as tighter rules on greenhouse gas emissions or fines for polluters.

However, banks were especially aware of, and keen to capitalise on, green finance opportunities.

The International Energy Agency, for example, estimates that if the world is to meet its 2 degrees Celsius warming target, US$7.7 trillion has to be invested in renewable energy and energy efficiency in China, India, Japan, and Southeast Asia between 2014 and 2035.

Emma Herd, chief executive of the Investor Group on Climate Change (IGCC) said in a statement that “the finance sector has recognised this opportunity and is gearing up fast”. IGCC is AIGCC’s counterpart in Australia and New Zealand; the two regional groups, along with initiatives from Europe and North America, form the Global Investor Collaboration on Climate Change (GIC).

Herd added: “While it’s clear that progress is uneven and gaps remain, such as a need for greater focus on climate risk in investing, progress over the past two to three years has been remarkable”.

Benjamin McCarron, founder and managing director of Asia Research and Engagement and lead author of the report, told Eco-Business that “six years ago, there were almost no domestic financial initiatives on these issues in Singapore, and almost no activity from leading financial institutions across Asia”.

“The developments highlighted in the report show strong momentum with acceleration in the last two years,” he added. 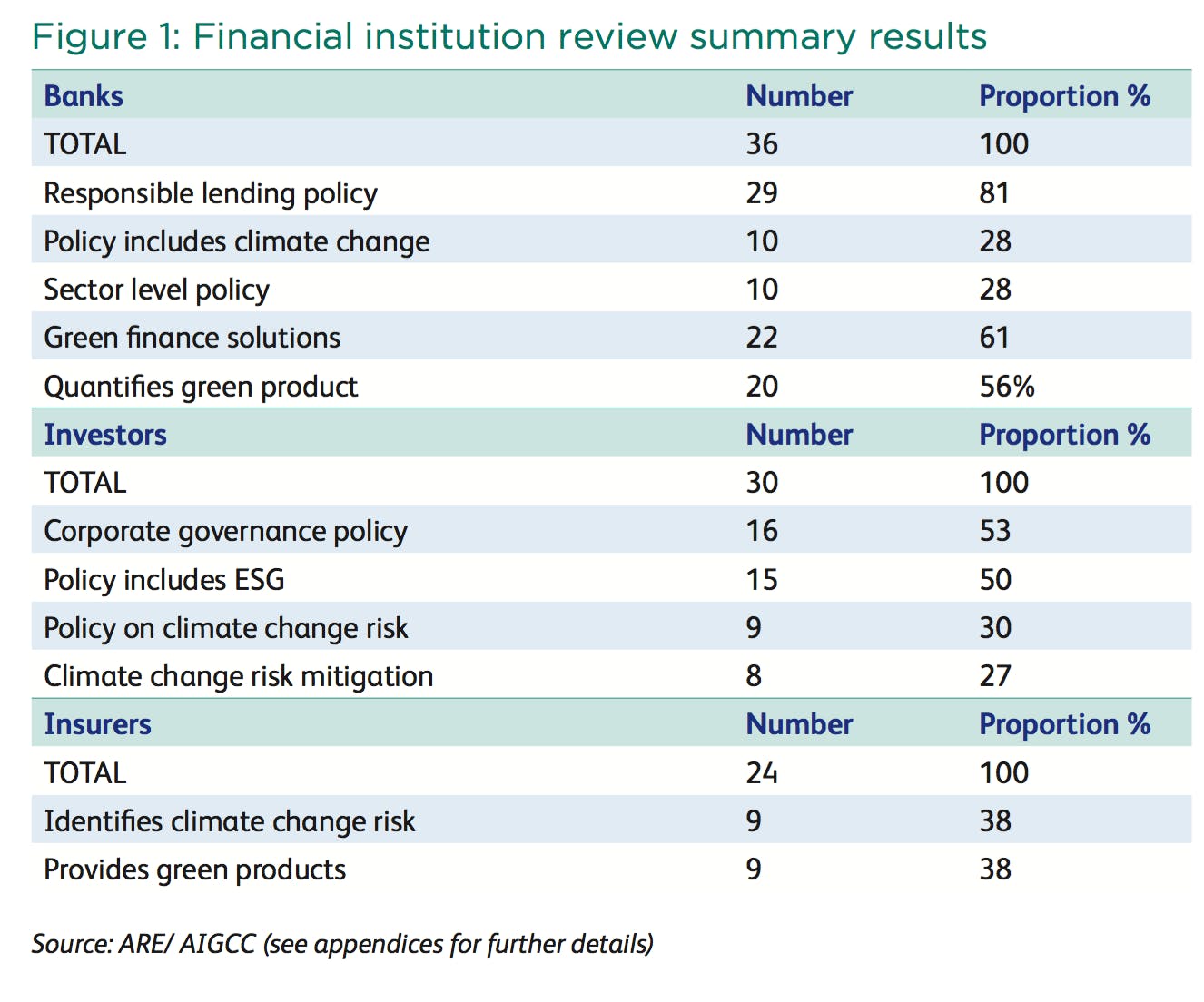 A summary of how Asia Pacific’s financial institutions fare on integrating climate change into their policies and products. Image: AIGCC

The report found that 29 of 36, or 81 per cent, of banks reviewed had a broad policy on responsible lending. Some 22 banks (61 per cent) offered green financing products, while 22 (56 per cent) even quantified the value of these offerings.

But only 10 banks — just over a quarter — cited climate change as a reason to limit lending.

“It is natural that banks seek new markets before reducing exposure to the old ones,” the report acknowledged. “However, without taking steps to limit exposure to carbon-intensive assets, banks may fail to address related risks and fail to decarbonise their overall growth.”

The report also noted that banks which did not assess investments for their climate impacts “will face higher risks as their clients adjust to more regulation and more volatile weather patterns”.

China’s banks, however, stood out for their extensive measures to restrict industries which were heavy energy users and polluters, said the report. This was because of recent Green Credit Guidelines from the country’s Banking Regulatory Commission.

Australian banks, too, had above-average disclosures on limiting exposure to high carbon industries. These were, however, due to voluntary policies.

While it’s clear that progress is uneven and gaps remain, such as a need for greater focus on climate risk in investing, progress over the past two to three years has been remarkable.

Where investors were concerned, the report found that 16 of the 30 firms surveyed had publicly-available information about their investment policies. However only nine investors referenced climate change specifically, while a mere eight shared the steps they were taking to mitigate climate risks.

Meanwhile, insurers are also adapting to the new payout patterns that will arise due to climate change. The report found that nine out of the 24 insurance providers assessed had factored climate change risks into their underwriting processes.

Many have also started offering green insurance products such as discounted premiums for hybrid cars, or insurance for rental bicycles. Insurers in Australia, Japan, and Taiwan lead the sector in such efforts.

Regulation must catch up

While the financial sector’s performance on climate risks varied across the 12 countries, so did the regulatory frameworks which support responsible finance and investment.

The report laid out many recommendations to accelerate progress among financial institutions and regulators alike.

It said that institutions, for example, should factor in climate change when setting policies for activities that were off-limits for funding; and should consider supporting shareholder resolutions which encourage international companies to disclose their carbon footprint.

Mindy Lubber, president of United States-based non-profit Ceres and director of the Investor Network on Climate Risk — the North American climate investor group — said that the AIGCC report “shines a light on the urgent need to ramp up clean energy investing globally”.

Andrew Affleck, managing director of Armstrong Asset Management — a founding member of AIGCC — added that “many parts of Asia are at the frontline of the adverse impacts of climate change.”

“The AIGCC is uniquely positioned by its focus and collective objective to highlight key challenges against, and create benchmark solutions for, scaling climate finance and investment throughout Asia,” he added.