Three palm oil firms were responsible for a quarter of deforestation in Indonesia, Malaysia and Papua New Guinea in 2020

These family-owned Indonesian firms, one of them Singapore-listed, supply the likes of Unilever, Danone, Kellogg’s, Mondelēz, and Nestlé. Thanks to Covid-19 movement restrictions, concessionary deforestation in Malaysia, Indonesia and Papua New Guinea fell by 58 per cent last year.

The felling of climate-critical forests to make way for palm oil plantations in Southeast Asia is increasingly concentrated among a few, low-profile companies, a report by thinktank Chain Reaction Research (CRR) has found.

New data using satellite imagery shows that three palm oil companies — all of them Indonesian family-owned firms — were responsible for almost a quarter (23 per cent) of observed palm oil concession deforestation in Indonesia, Malaysia, and Papua New Guinea in 2020.

The worst offender by far is Sulaidy, a company owned by an Indonesian businessman of the same name who controls eight concessions in Kalimantan. Sulaidy’s firm cut down 6,390 hectares of forests within its concessions in 2020. Sulaidy operates below the radar, as he does not own or operate any mills and there is little public information about him. His subsidiaries supply multinational consumer goods companies including Kellogg’s, Danone, Mondelēz, Unilever and Nestlé that have all made public commitments to cut deforestation out of their supply chains.

Last year’s second biggest deforester in Indonesia, Malaysia, and Papua New Guinea was Ciliandy Anky Abadi (CCA), a company connected to the Fangiono family, which owns Singapore-listed First Resources and FAP Agri. CCA cleared 3,455 ha of forests in 2020. Through its mills, the company supplies the likes of Friesland Campina, Johnson & Johnson, and L’Oreal.

Third on the list is Bengalon Jaya Lestari, a newcomer on CRR’s annual deforestation ranking, which cleared 2,790 ha on concessions in North Kalimantan in 2020. It is the only company not connected to consumer-facing buyers with no-deforestation commitments.

Many of the companies on CRR’s top 10 deforesters are serial offenders, also featuring in CRR’s analysis for the most forests cleared within their concessions in 2019 and 2018. Besides Sulaidy, Mulia Sawit Agro Lestari Group and the Jhonlin Group were the most chainsaw-happy palm oil companies of the last three years. The three firms cut down 26,090 ha, 9,226 ha, and 11,857 ha, respectively, between 2018 and 2020. 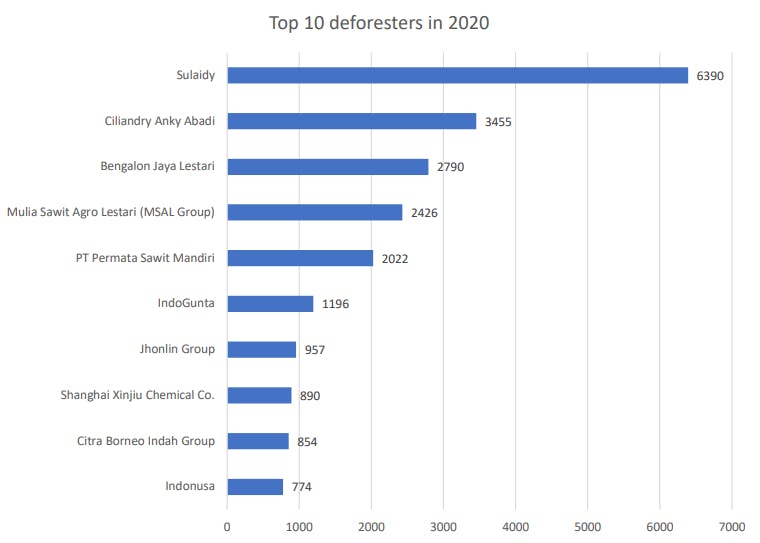 Of the rainforests felled in 2020, 58 per cent were cleared by the companies in the ranking above, the remaining deforestation was split among 112 different companies. That so many of the heaviest deforesters are suppliers for leading multinational consumer brands highlights the failure of their no deforestation, no peat, and no exploitation (NDPE) policies, the report noted.

The research, which was coordinated by research consultancy Aidenvironment and partner organisation Earth Equalizer, found that deforestation in company concessions has decreased, dropping by 58 per cent year on year, from 90,000 ha in 2019 to 38,000 ha in 2020.

CRR concluded that Indonesia’s economic contraction — the country has gone into a recession for the first time since the 1998 Asian financial crisis — and travel restrictions issued because of the Covid-19 pandemic were among the reasons for this decline in forest clearance.

“Continued restrictions because of the pandemic, in Indonesia and key export markets, may explain the continued slow pace of deforestation in Q3 and Q4 of last year, although domestic demand and rallying palm oil prices may result in an upturn in land development in 2021,” the report cautioned.