The world needs to triple its annual investment in nature by 2030 to protect land, wildlife and climate

The UN’s State of Finance for Nature report says that public and private entities need to quadruple their annual investment in nature if the climate, biodiversity and land degradation crises are to be tackled by the middle of the century.

Nature-based solutions (NbS) are woefully underfunded with the public sector coughing-up the majority of investment, which is still inadequate, according to an inaugural State of Finance for Nature report by the United Nations Environment Programme (UNEP).

Global annual spending to avoid the breakdown of natural ecosystem “services” such as clean water, food and flood protection needs to triple this decade to about US$350 billion by 2030 and rise to US$536 billion by 2050, the UN report said.

The report, published on 27 May, looked at how to tackle the planet’s climate, biodiversity and land degradation crises, estimating that about US$8 trillion in investment is needed by mid-century to safeguard natural systems.

Annual investment in nature, excluding money pledged but not yet delivered, totalled US$133 billion in 2020, according to the report, with public funds making up 86 per cent. The report urged financial institutions, governments and business to substantially increase their investments.

Inger Andersen, executive director of the United Nations Environment Programme, said at the report’s launch that the amounts required may sound large but “it’s peanuts when we are frankly talking about securing the planet and our very own future”.

A failure to ramp up investments in nature will threaten the goals of the Paris Agreement on climate change, the report said, while more animal and plant species would be lost as a result. 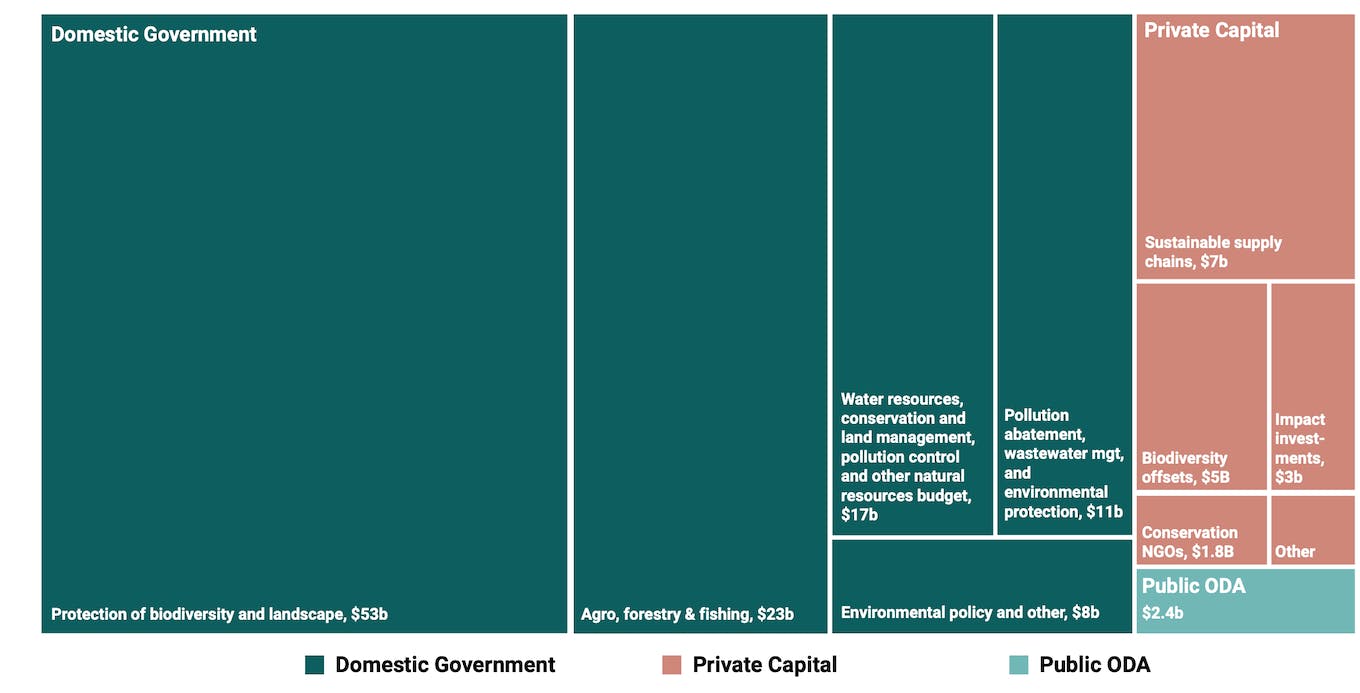 These figures are the midpoint between the lower and upper bounds of annual investment. Source: “State of Finance for Nature”, United Nations Environment Programme, 2021.

The majority of public-sector finance is invested in biodiversity and landscape protection, rehabilitation and restoration. Asia is earmarked as having the largest investment need, according to the findings. However, these are largely estimates as investment into NbS are not tracked or consistently, or explicitly, reported: “the absence of a universally applied definition of NbS conceals some activities” the report said. 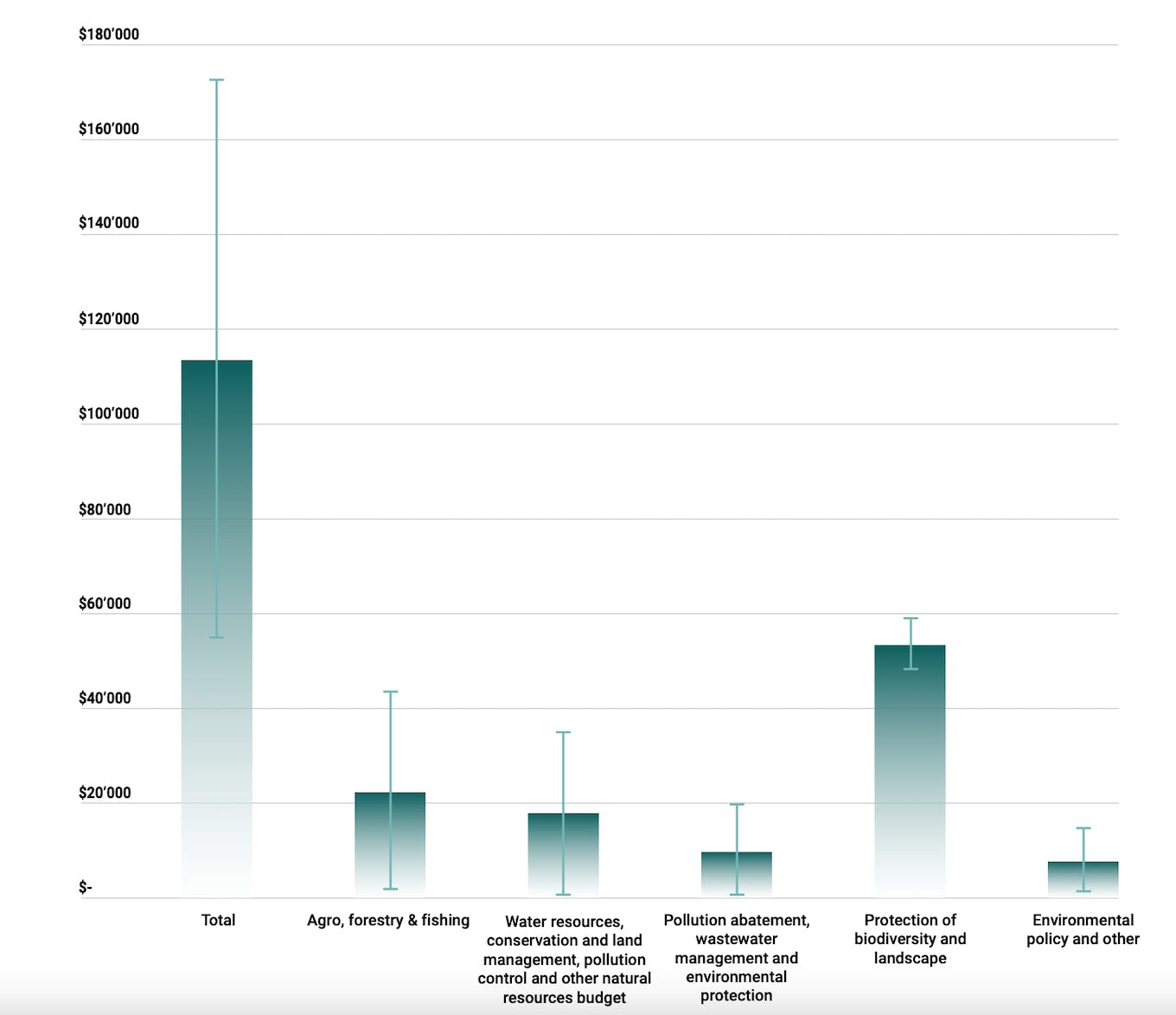 Nature based solutions are defined by the International Union for Conservation of Nature as “actions to protect, sustainably manage, and restore natural or modified ecosystems, that address societal challenges effectively and adaptively, simultaneously providing human well-being and biodiversity benefits.”

The focus on NbS financing in pandemic recovery programmes is largely missing. The reports stated that nature accounts for just 2.5 per cent of projected Covid-19 economic recovery spending worldwide.

“With the exception of some countries and cities that have included investments in forests and NbS in their recovery packages, governments are so far missing this unique opportunity for green investment,” said the report.

The public sector could help create opportunities for private investment but should also bump-up its own investment in NbS. The UN identified a lack of cash flow in existing NbS projects, a lack of coherent regulation and suitable funding mechanisms as key barriers to investment in NbS and limit private-sector investment.

“Clearer definitiions of what qualifies as NbS would encourage investment and policymaking,” the report noted, and would also “support better data collection on investment, impact, costs and need.”

Market incentives and fiscal instruments such as taxes and subsidies could help increase private investment in NbS, the UN argued in its findings, matched with reforming policies that are currently having a negative impact on nature, the climate and land degradation. Subsidies for harmful pesticides and fossil fules which amount to billions of dollars a year, should be redirected to more nature-friendly activities, the report recommended.

Governments and corporates alike are increasingly recognising the risks posed by the loss of biodiversity and natural ecosystems to their assets and activities. Banks also need to take into account the negative impacts of their lending on nature and the climate. The UNEP report urged financial insitiutions to develop and adopt tools to measure and manage nature-based risk exposure.

The report come on the back of the formation of the High Ambition Coalition (HAC) for Nature and People, which includes members such as the United Kingdom, the European Commission, France, Japan and countries from six continents. The coalition has committed to protect almost a third of land and oceans by 2030 to halt the destruction of the natural world and slow the extinction of species. The push comes ahead of a key UN biodiversity summit in Kunming, China, planned for October.