The Rainbow Warrior: Turning the tide for climate justice

Ahead of court hearings led by the Philippine Commission on Human Rights on the role of companies in contributing to climate change, a famous ship docks in Manila to amplify the voices of those affected by climate change.

The Rainbow Warrior, Greenpeace’s iconic environmental campaign ship, arrived in the port of Manila on 14 February, marking the beginning of a 20-day journey to parts of the Philippines that have borne the brunt of climate change.

“The Rainbow Warrior is here as a symbol of climate justice and people power, as those impacted most by climate change reclaim their rights for sustainably sourced food, to resilient oceans and to witness how the people are taking their power back by telling their stories of survival and hope,” Greenpeace Southeast Asia executive director Yeb Saño told Eco-Business on a tour of the famous vessel.

The ship’s visit is timely, said Saño, as international human rights groups are set to assist the Philippine Commission on Human Rights (PCHR) with public hearings framing climate change as a human rights issue from 27 to 28 March in Manila, followed by two more hearings in the Philippines as well as one in New York and one in London during the second half of the year.

Two years ago, Filipino typhoon survivors and civil society activists filed a petition, urging the Philippines’ National Commission on Human Rights to investigate 47 companies, including ExxonMobil, Shell, BP, Chevron, ConocoPhillips, Suncor and Repsol, for perpetuating human rights violations by contributing to climate change leading to natural disasters. One of these disasters was super-typhoon Haiyan, known locally as Yolanda, which devastated the Philippines in 2013 and left more than 6,300 dead.

The Commission held its first preliminary meeting in December to discuss how the investigation would be conducted and who would be involved.

The Rainbow Warrior is here as a symbol of climate justice and people power as those impacted most by climate change reclaim their rights.

Of the accused companies, only representatives from cement giant CEMEX appeared at the PCHR headquarters in Manila, along with 10 other respondents, all of whom filed submissions that questioned the jurisdiction of the commission.

“If these companies do not submit their evidence in the upcoming public hearings, it will be their loss,” said Saño.

“They will not be able to defend themselves and we can win the case. We have gathered enough evidence to show that they knew early on about the negative impact of their products on the environment but still continued with them,” he said. 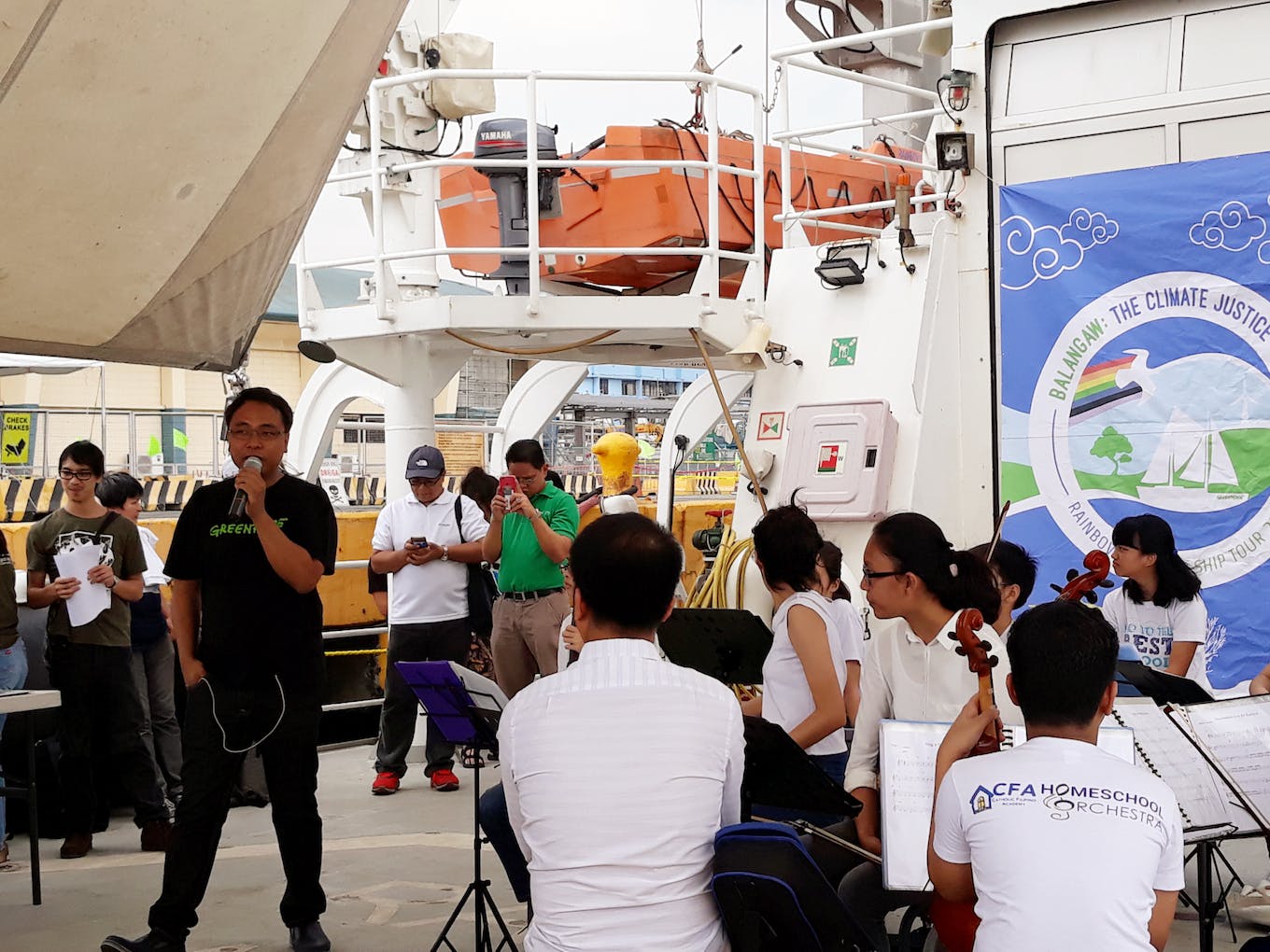 Going by the theme of “Balangaw (which means “hope” in Tagalog): The Climate Justice Ship Tour”, the Rainbow Warrior’s first day in Manila gathered on board petitioners from farming, fishing, and indigenous communities as well as environmentalists who reiterated their call for climate justice.

“Climate change affects everyone on the planet, yet those least responsible for it are bearing the brunt of its consequences,” said Veronica Cabe, a community organiser and anti-coal activist.

“Those in power are not doing enough, so citizens and communities are coming together to claim back their power and assert their rights. We are demanding that the world’s big polluters clean up their acts and embrace real solutions.”

The Rainbow Warrior did not just highlight climate justice for victims of extreme weather events fueled by big polluters. The second day of the Manila tour served as a platform to showcase how climate change is leading to food insecurity.

Aboard the ship, nutrition experts talked about the increase of meat consumption and the decline of fruits and vegetables in the Filipino diet, and how changing eating preferences were contributing to climate change.

A mindset shift is required to improve nutrition, especially among children, said Mei-Ling Dulig, health and promotion officer of the Philippines’ Department of Education. As such, the government has launched a programme to provide healthy meals loaded with vegetables for undernourished school children.

The final day of the Manila tour was marked by discussions about the archipelago’s coral reefs, which have suffered from mass coral bleaching over the past 20 years. 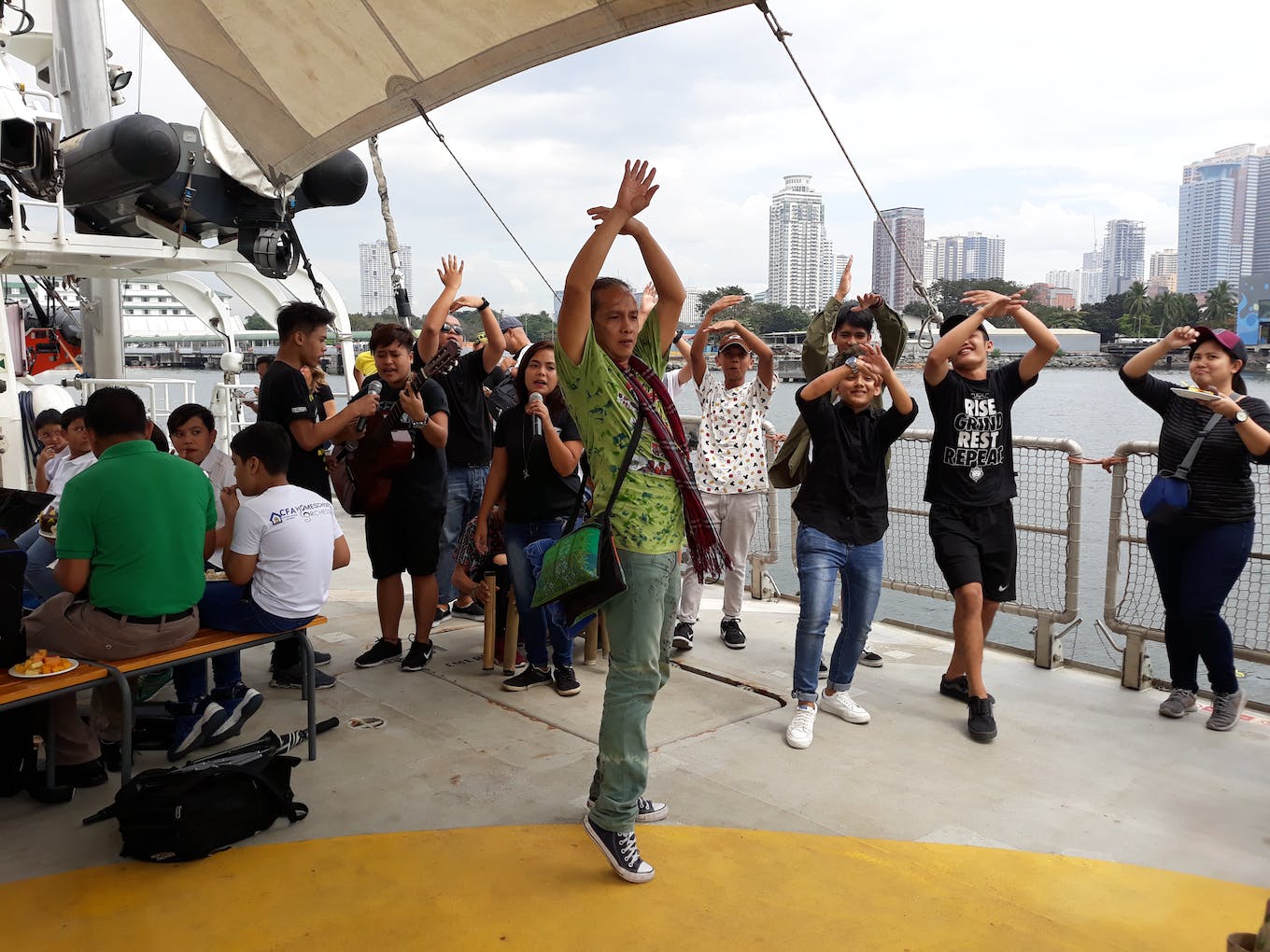 On board the ship, artists perform an indigenous dance against a backdrop of the Manila Bay shoreline. Image: Eco-Business

Rising sea temperatures due to climate change cause corals to expel algae, which is responsible for their colorful state. When this happens, corals turn white or look “bleached”.

Environmentalists called for more protection of the reefs and other marine ecosystems through the effective management of marine protected areas and ocean sanctuaries, to include not only coral reefs, but also seagrass and mangrove areas.

“The Philippines, being the epicenter of global marine biodiversity and the apex of the Coral Triangle, is crucial to a healthy and resilient ocean. Even though massive bleaching has happened across the country, we can remain hopeful since there are coral reef areas that that did not bleach and are showing signs of recovery,” said Dr. Perry Alino, professor at the Marine Science Institute at the University of the Philippines.

A symbol of hope 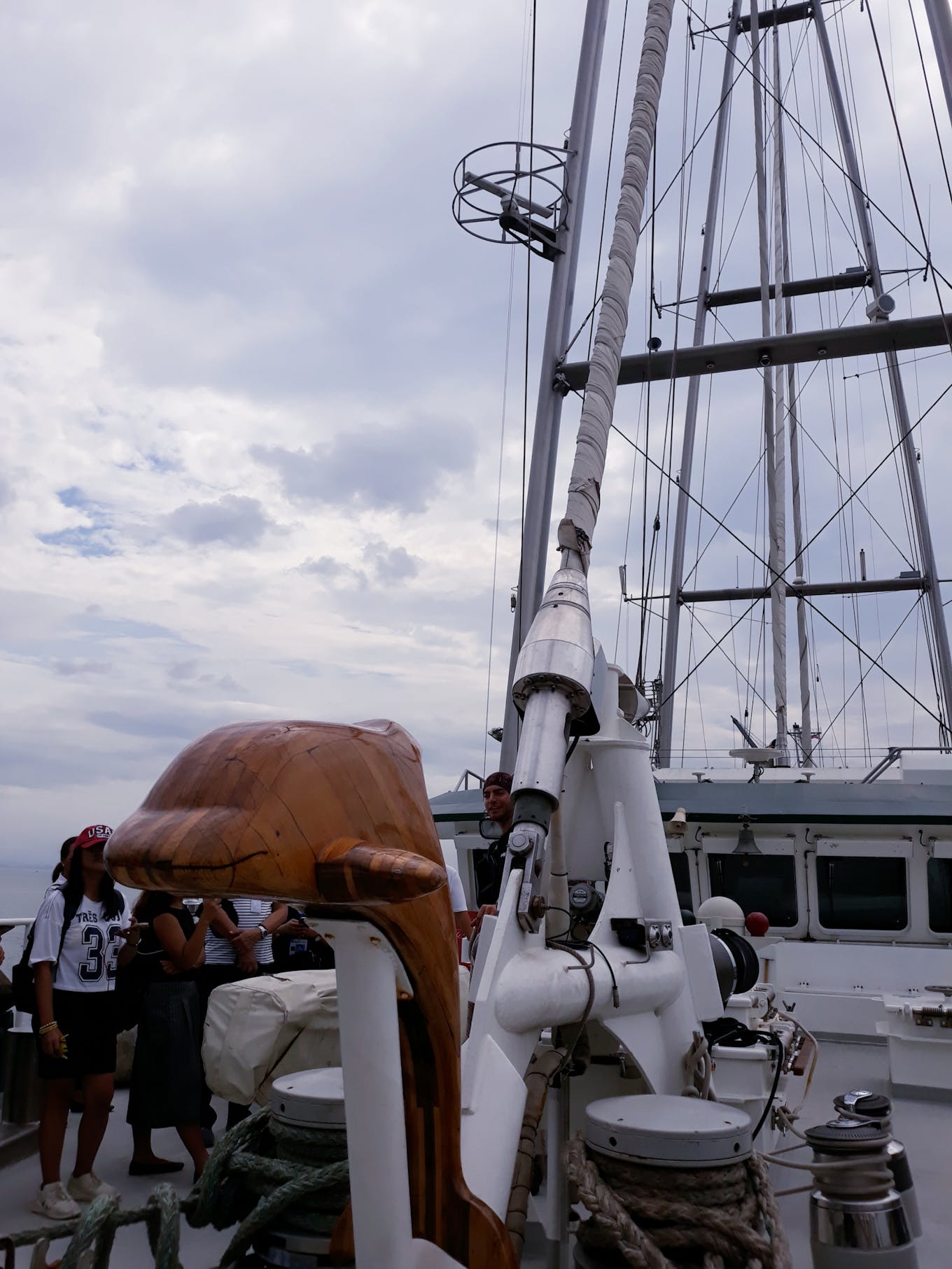 On the deck of the ship, a wooden dolphin named “Dave” can be found—a gift from Germany as a symbol for safe travels. The ship’s 55-metre mast can also be seen as the ship maximises wind energy for highly effective sailing. Image: Eco-Business

The Rainbow Warrior is a fitting symbol for this call for climate justice as it is considered the most iconic environmental ship of the three in Greenpeace’s fleet, which include Arctic Sunrise and Esperanza.

It was named after an American Indian prophecy which goes by these words: “When the world is sick and dying, people will rise up like Warriors of the Rainbow.”

In 1985, the ship was in New Zealand to oppose French nuclear testing in the Muroroa Atoll. As the ship was about to leave Auckland, French secret service agents planted two bombs on the vessell and sank it. The French government denied knowledge of the operation at first but later admitted it to an outraged public.

After the bombing, the Rainbow Warrior II was built, and the vessel continued Greenpeace’s crusade against French nuclear testing.

The Rainbow Warrior was relaunched in 2011 as the first ship built specially for Greenpeace and is one of the most energy-effficient ships in the high seas. It runs mostly on wind energy, using a 55-meter high A-frame mast system that can carry more sails than conventional ships of the same size. It also uses non-toxic paint, does not dump wastewater into the ocean, and unlike most ships, takes into consideration the crew ratio for how much waste it can accommodate.

From Manila, the ship will travel to Guimaras where it will campaign for renewable energy and show how the Philippines is trying to move away from coal.

The last stop will be in the region hardest hit by typhoon Haiyan in Tacloban where the local Waray-waray people are reclaiming their lives and telling their stories to hold the big polluters to account.

After the Philippines, it will continue its Southeast Asian tour in Indonesia, Singapore, Malaysia, with the last stop in Thailand. 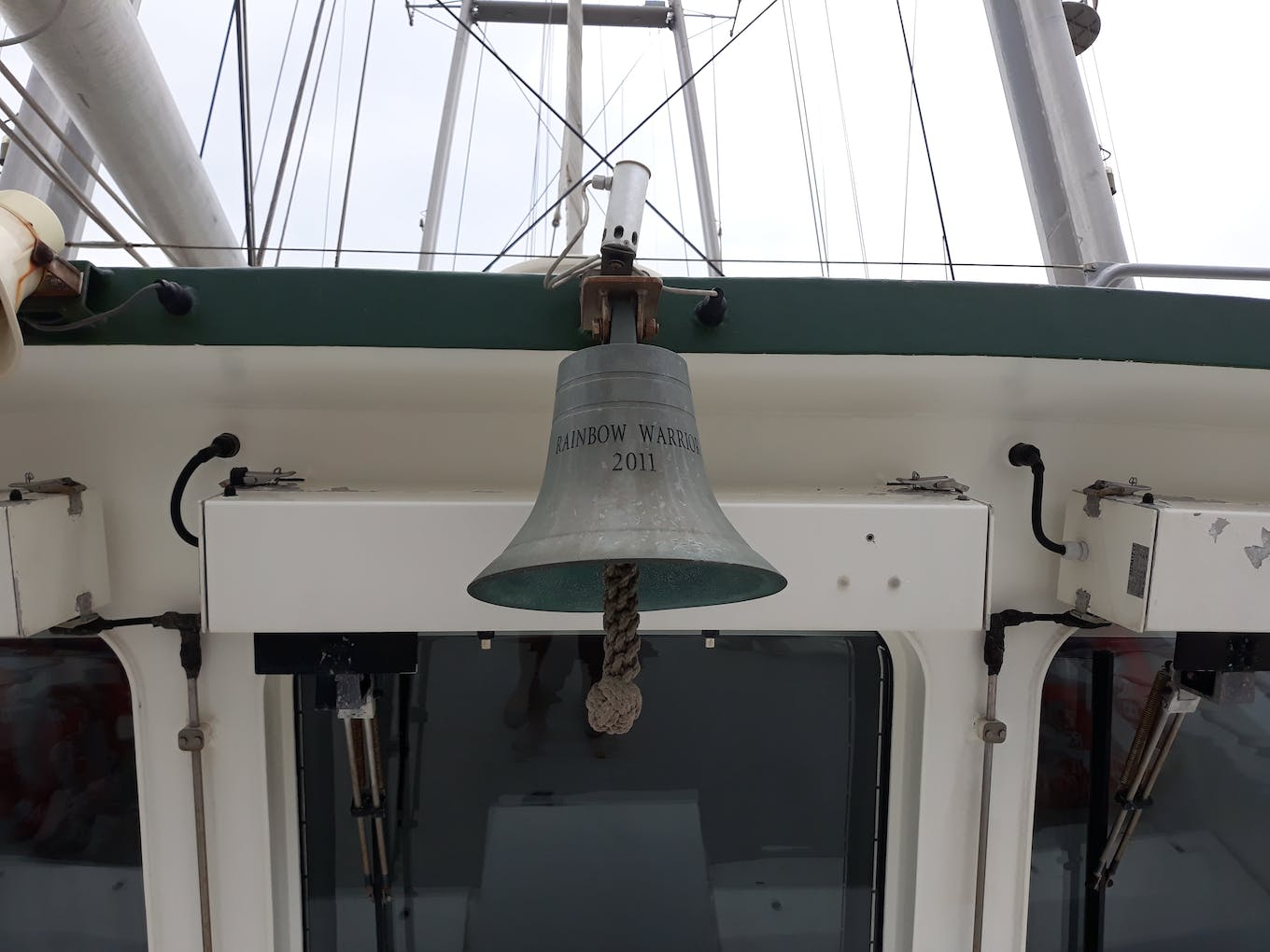 Relaunched in 2011, Rainbow Warrior III has sailed with the tides to become a symbol of peaceful resistance. Image: Eco-Business