The race against time to cut rice’s carbon footprint

Rice is the most polluting grain, but demand for the staple food is growing. A project called the Sustainable Rice Platform started in 2015 and has grown to 500,000 farmers across 21 countries today. It’s only just getting started.

When Thai farmer Winaisak Sripakdee learnt about a project that offered training to grow rice using less water, less fertilisers and better seeds in 2018, he was curious to see if it was for real.

He volunteered a demonstration plot on his rice field in in Ubon Ratchathani, eastern Thailand, and was “very happy with the result”.

The 47-year-old grew up helping his parents and grandparents on rice fields and now tends 9.6 hectares with his wife. His paddy field is rain-fed and does not rely on irrigation, which means its yield depends heavily on rainfall and the weather, which he said is getting more unpredictable.

In the past, after a tractor had levelled his field, Sripakdee would only do a visual check for any remaining uneven spots. Through the project under the Sustainable Rice Platform (SRP), he began using a laser transmitter to ensure, with much greater precision, that the field was evenly levelled. This helped greatly in reducing the water and fertilisers needed, and resulted in more evenly maturing crops.

The climate impact of alternate wetting and drying sparked debate among rice experts, after a study in 2018 reported that the practice could result in higher levels of nitrous oxide—a greenhouse gas even more potent than methane—than previously thought.

But experts from the International Rice Research Institute and other institutions responded to the study, saying there was no information showing the likelihood that nitrous oxide emissions are underestimated.

The authors of the study, from the nonprofit Environmental Defense Fund (EDF), replied. The EDF reiterated that under intense forms of intermittent flooding, the focus of mitigation should shift from methane to nitrous oxide, which is a long-lived greenhouse gas.

It is possible that many farms using alternate wetting and drying may be under mild-intermittent flooding regimes, which would minimise both methane and nitrous oxide, the EDF said. But this cannot be assumed, and more research is needed to map flooding regimes and measure nitrous oxide from rice paddies, it added.

“Many farmers worried that using a lot less seed would kill the production yield. In fact, the space between seed rows allows the plant to produce more tillers (grain-bearing branches),” he said.

Rice production presents a conundrum in a world facing a climate crisis. It is a staple food for much of the world’s population, and production will need to nearly double by 2050 to meet demand. But it is also the most polluting grain, and is said to be responsible for 2.5 per cent of man-made global warming. Growing the crop, which has traditionally been done in flooded fields, results in emissions of the potent greenhouse gas methane.

Under current conditions, additional land equivalent to the size of Chile would be needed for rice production to meet demand by 2050. Resulting emissions would be equivalent to 300 billion kg of carbon-dioxide, according to food and agribusiness firm Olam International.

71 farmers in the beginning

In 2015, SRP rolled out the Standard for Sustainable Rice Cultivation and its first set of performance indicators, and began a pilot project with 71 farmers in Ubon Ratchathani.

Since then, SRP pilot projects have been successful in reducing the resource footprint of rice production—20 per cent less water and 50 per cent less greenhouse gas emissions, on average—and have raised farmers’ incomes by about 10 per cent.

This set the stage for its expansion. The SRP became an independent body last year and now has over 100 member organisations. Over 500,000 farmers are enrolled in 25 projects across 21 countries, said Narawadee Modenuch, Olam’s rice research analyst in Thailand.

Thai farmers make up the largest group, with 134,000 involved in SRP projects, she said. The SRP’s target is to reach 1 million farmers by 2023.

As of 2020, Olam is involved in projects that engage over 11,000 farmers in its rice supply chains across Thailand, Vietnam, Indonesia and India, and is targeting 50,000 farmers in Asia by 2023, said Modenuch.

The impact of these projects under the SRP will be monitored through the metrics of AtSource, Olam’s business-to-business sustainable sourcing platform. This transparency will allow rice brands and manufacturers to track the social and environmental footprint of their rice from the field, right up to their door, via the digital dashboard. In turn, they can better engage consumers on the story behind their rice products and, hopefully, drive more sustainable buying decisions, she said.

Although SRP’s numbers today are not to be sniffed at, Modenuch said it is impacting less than 1 per cent of rice production worldwide. Without revealing exact figures, she said costs during the project’s pilot stage, which ended last year after revised performance indicators and standards kicked in, were equally shared among Olam, GIZ and the Thai Rice Department. With more funding, the SRP would be able to scale up more rapidly.

SRP was recently shortlisted, along with 99 other initiatives, for a US$100 million grant under the MacArthur Foundation’s 100&Change competition, which seeks bold solutions to the critical problems of our time. The winner will be announced later this year.

Modenuch said considerable time and resources are needed to train farmers on advanced agronomy practices, and multiple sessions are needed over several years to develop the right knowledge, skills and confidence. “The risk of getting (practices) wrong is a potential loss of crop and, therefore, income for the farmers. Like any partnership, our engagement with these farmers requires diligence and continual engagement,” she said. 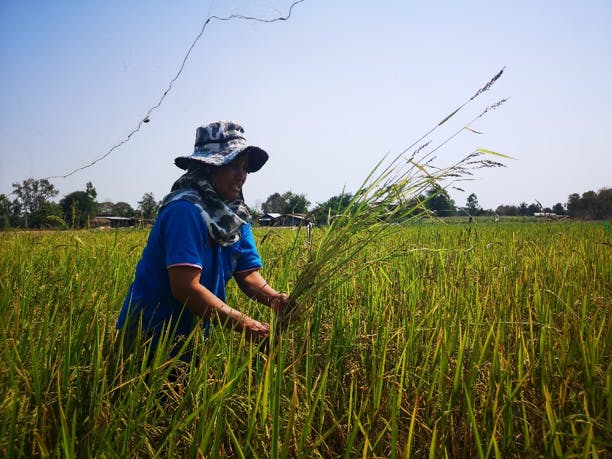 Besides companies, which should support sustainable farming practices by incorporating environmental and social criteria in their procurement contracts, governments and consumers also have a role to play.

The Thai Rice Department is well aware of challenges facing rice producers in Thailand and has tried to put strategies in place to empower farmers and address labour shortage, said Ladda Viriyangkura, a rice expert who was formerly with the department and is now GIZ’s senior advisor on sustainable rice policy.

The kingdom supplies 4 per cent of the world’s rice and is the second-largest exporter globally. The average age of Thai rice farmers is about 58 and the younger generation, which is generally not keen to enter the vocation, will sell their parents’ farms when they inherit the land, she said. Farmers also lack access to loans, as well as to technologies and information that would enable them to be more productive.

Then, there is the challenge of climate change. Only 22 per cent of Thailand’s planted area for rice has access to irrigation systems; the majority is rain-fed, making farmers highly vulnerable to increasingly unpredictable weather patterns, she said.

Viriyangkura said the Thai Rice Department is looking at both climate mitigation and adaptation measures, including specific techniques for planting, fertiliser management and integrated pest management.

It is also introducing a “mega farm” project , which encourages small farmers to organise into groups for better access to equipment and resources. Rice community centres have been set up to dish out certified seeds and advice to farmers, the government is also facilitating greater access to machinery to address labour shortage.

A new label later this year

As for consumers, a label to identify rice that has been grown more sustainably could be found on packets of the grain sold in supermarkets, possibly in Europe, later this year.

The SRP has partnered Global G.A.P., an organisation that sets voluntary standards for certification of agricultural products, to establish the world’s first rice-certification programme with on-pack labelling, Modenuch said.

“We hope the on-pack labelling will influence consumers’ buying decisions and help drive demand for sustainable rice,” she said.

This would help fuel the dreams of the rice farmers. Sripakdee said he has used some of the extra income from higher rice yields to buy more cows, while another rice farmer, Udon Kamwongsa, said she hopes to buy more land to save for her son’s education.

Kamwongsa, 42, has been a farmer for 17 years and works on a four-hectare farm with her parents. They own part of the land and lease just under half of the area. Since joining the SRP last year, Kamwongsa, secretary of the Ban Khu Mueang Community Rice Centre in Ubon Ratchathani, has minimised her use of chemicals and no longer burns her field to get rid of rice stubble. Instead, she sells some of the straw and plows some of the stubble to channel nutrients back into the soil. The remainder, she saves for her cattle, whose manure is used for fertiliser.

Said Kamwongsa of her son: “He is seven years-old and shows an interest in farming. I hope that one day he will carry on the farming on our own land.”