The Philippines—Asia's most dangerous country for environmental defenders

A shocking 48 killings were reported in the country last year, which was the worst on record for activist murders globally, according to a Global Witness report. For the first time, most of the murders occurred in large-scale agricultural plantations.

Filipino activists are paying the price for defending the environment with their lives.

A 2017 Global Witness report released on Tuesday revealed that the archipelago is the most dangerous country in Asia for environment defenders, with 48 killings recorded last year—a 71 per cent rise on 2016.

The Philippines ranks second in the world for activist murders, after Brazil, where there were 57 killings in 2017.

India, Pakistan, and Myanmar also feature in the rankings. Some 63 killings occurred in Asia, the world’s second most dangerous region for activists after Latin America.

In total, 207 people in 22 countries were killed last year for defending human, land, and environmental rights in what was the deadliest year on record, said the report titled, At What Cost? 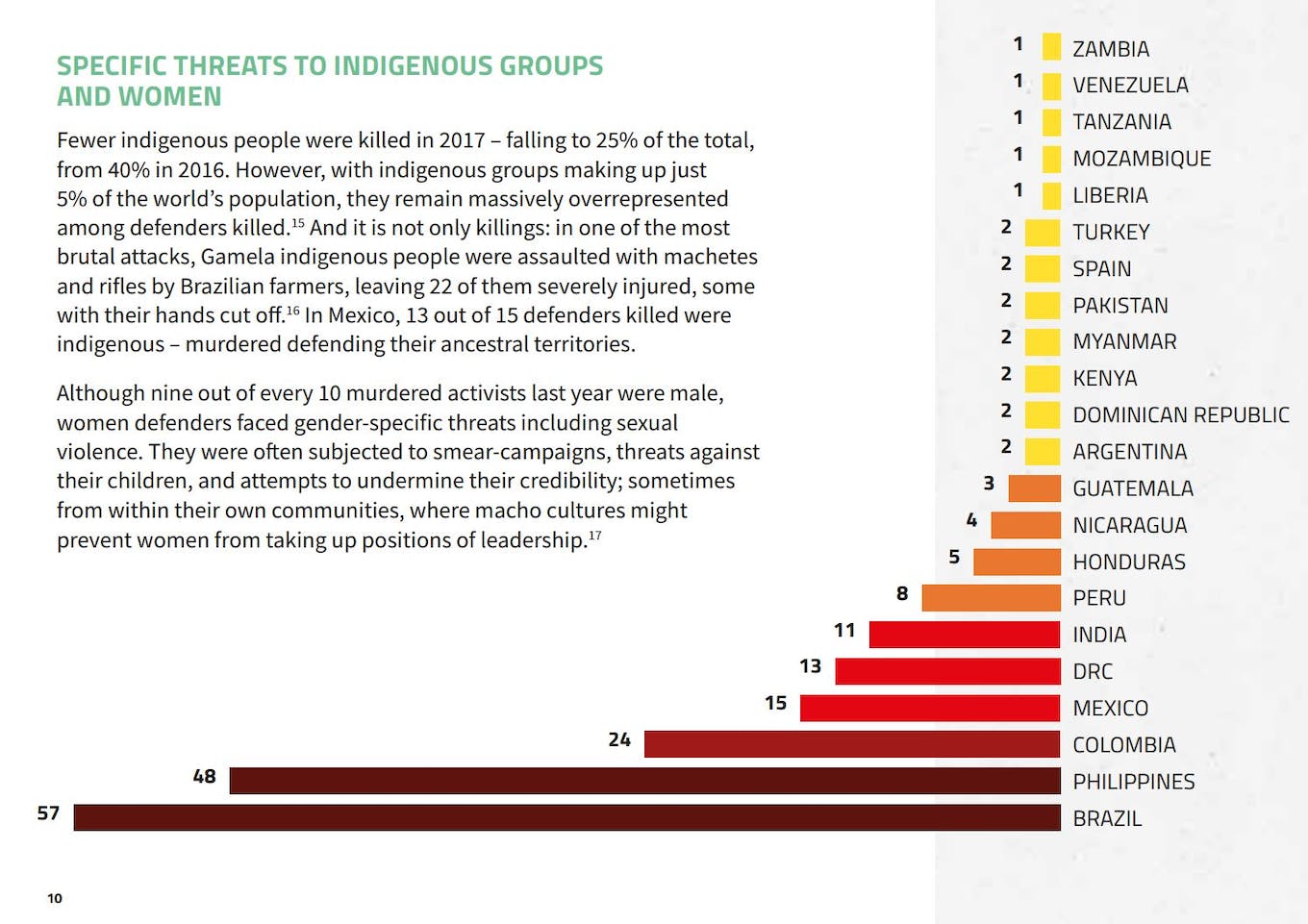 Since international non-profit Global Witness began collecting data in 2010, it recorded 266 killings of land and environmental defenders in Southeast Asia, representing 16 per cent of the global total.

Last year, the bloodiest of incidents in the Philippines occurred on December 3 in Lake Sebu in the southern island Mindanao, when a militia descended on a small indigenous community, leaving eight dead, wounding five and causing 200 to flee. The community’s determination to regain territory lost to plantation company Silvicultural Industries had led to the violence, according to a report by The Guardian.

Companies have a responsibility to their customers, who should have confidence that the products they buy are not fuelling human rights abuses, cultural destruction or environmental devastation.

Over the years, Silvicultural Industries, part of the vast agribusiness, mining and construction conglomerate, DMCI, has reportedly acquired 11,862 hectares of land in the area for its Dawang Coffee Plantation.

Ben Leather, senior campaigner, Global Witness, blamed Philippine President Rodrigo Duterte’s administration, which is known for an anti-drug campaign that has seen thousands of extra-judicial killings of suspected drug pushers, for the increasing violence against environmental defenders in the country.

The President’s policy on indigenous people came into question in March this year when he labelled United Nations Special Rapporteur for the rights of Indigenous People Vicky Tauli-Corpuz a “terrorist” among 600 other social justice, environmental and human rights advocates.

Tauli-Corpuz, who has not been able to return to the Philippines since the pronouncement for fear for her safety, said the President’s move was retaliatory in her defence of Lumads indigenous people affected by a war against Islamic State terrorists in Mindanao.

Eco-Business has reached out to the Philippines’ presidential communications group for comment.

Agri-business is the bloodiest industry

For the first time, agri-business topped mining as the most dangerous industry for activists to confront, with at least 46 people killed while protesting against palm oil, coffee, tropical fruit and sugar cane plantations.

Killings linked to mining and oil operations increased from 33 to 40, and 23 murders were related to logging. Taking on wildlife poachers became even more dangerous, with a record 23 people killed, mostly park rangers in Africa.

Leather said the murders are a result of governments and businesses valuing profit over human life.

“Many of the products emerging from this bloodshed are on the shelves of our supermarkets,” Leather said, referring to killings that have occurred in palm oil plantations. “Yet as brave communities stand up to corrupt officials, destructive industries and environmental devastation, they are being brutally silenced. Enough is enough,” he said.

Environmental defenders in Asia contend with corrupt governments and irresponsible business practices, but governments and businesses are also in a position to tackle the root causes of the killings, the report said.

Governments must recognise the role of defenders and guarantee their protection and safety, and above all, end corrupt practices, the group said.

“Businesses and politicians know their reputations, votes and profits will suffer if they don’t do more to help,” Leather told Eco-Business.

Companies that own and operate plantations in Asia must ensure that their businesses do not infringe on people’s rights. Investors, through development banks, must place stricter controls in ensuring they do not lend money to businesses involved in aggression, the group said.

Consumers, who are at the receiving end of the supply chain, have the power to end the violence in the agri-business sector by choosing to buy only responsibly sourced products.