Cutting tailpipe emissions still matters. But as electric vehicle adoption moves towards a tipping point, some car makers are looking at a different decarbonisation strategy. They want to use as many reusable raw materials as possible in their designs. 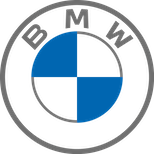 Automakers are preparing for an electric future. Across the globe, battery-powered vehicles are having a breakthrough moment, with a surge in sales seen in the United States, Europe and China, among other key markets.

Globally, sales of electric cars hit 6.6 million in 2021, more than tripling their market share from two years earlier. However, as electric vehicle (EV) adoption hits a tipping point, the automotive industry, which currently contributes over 10 per cent of industrial emissions, will have to find new ways to speed up its decarbonisation efforts.

Achieving circularity in EV design is seen as a crucial strategy. Industry leaders, eager in their quest to build zero-emissions, fully-recyclable cars, are now making hefty investments to retool production and assembly plants, as well as source for alternative material for what makes a car – from its exterior to seat upholstery, and even floor mats.

Some are on the lookout for the next technological leap that will significantly lower a vehicle’s lifecycle footprint.

The World Economic Forum (WEF) believes that the industry has to embrace life cycle decarbonisation to achieve an automobility system that is firmly grounded within a 1.5 degrees Celsius climate warming scenario by 2030, as mapped out in the Paris Agreement.

Analysis by the international organisation shows that significant abatement in material carbon emissions is possible, with very little additional cost.

“Electrification is not the sole answer to the decarbonisation challenge. The automotive industry must also tackle emissions embedded in vehicle materials,” said WEF, in a report on the creation of circular economies for EVs.

The term “circular car” refers to a theoretical vehicle which produces zero material waste through its entire value chain, including throughout its manufacturing, production and use. According to WEF, steel and batteries in an EV currently have the highest decarbonisation potential, since they make up the largest share of a vehicle’s overall material emissions.

In recent years, low-carbon steel, produced without coking coal, a process traditionally needed for steel making, has become a hot commodity for automakers. This is especially so as technological breakthroughs in renewables are allowing the carbon curve to be bent further at lower costs.

Just this month, the BMW Group, one of the world’s major automakers known for its sporty luxury cars, announced a boost to the use of ‘green steel’ for cars produced at its European plants from 2026 onwards. It signed an agreement with steel producer Salzgitter AG, four months after a similar sourcing contract for low-carbon steel, produced by using hydrogen and renewables, was inked with a Swedish startup.

The German auto giant is emerging as an early buyer of low-carbon steel. It has announced plans to increase the use of secondary steel in its vehicles, reaching up to 50 per cent by 2030, with an aim to reduce carbon dioxide emissions from its vehicles by at least 40 per cent through its entire value chain, starting with raw materials.

The group has also pledged net-zero carbon emissions along its entire value chain by 2050. 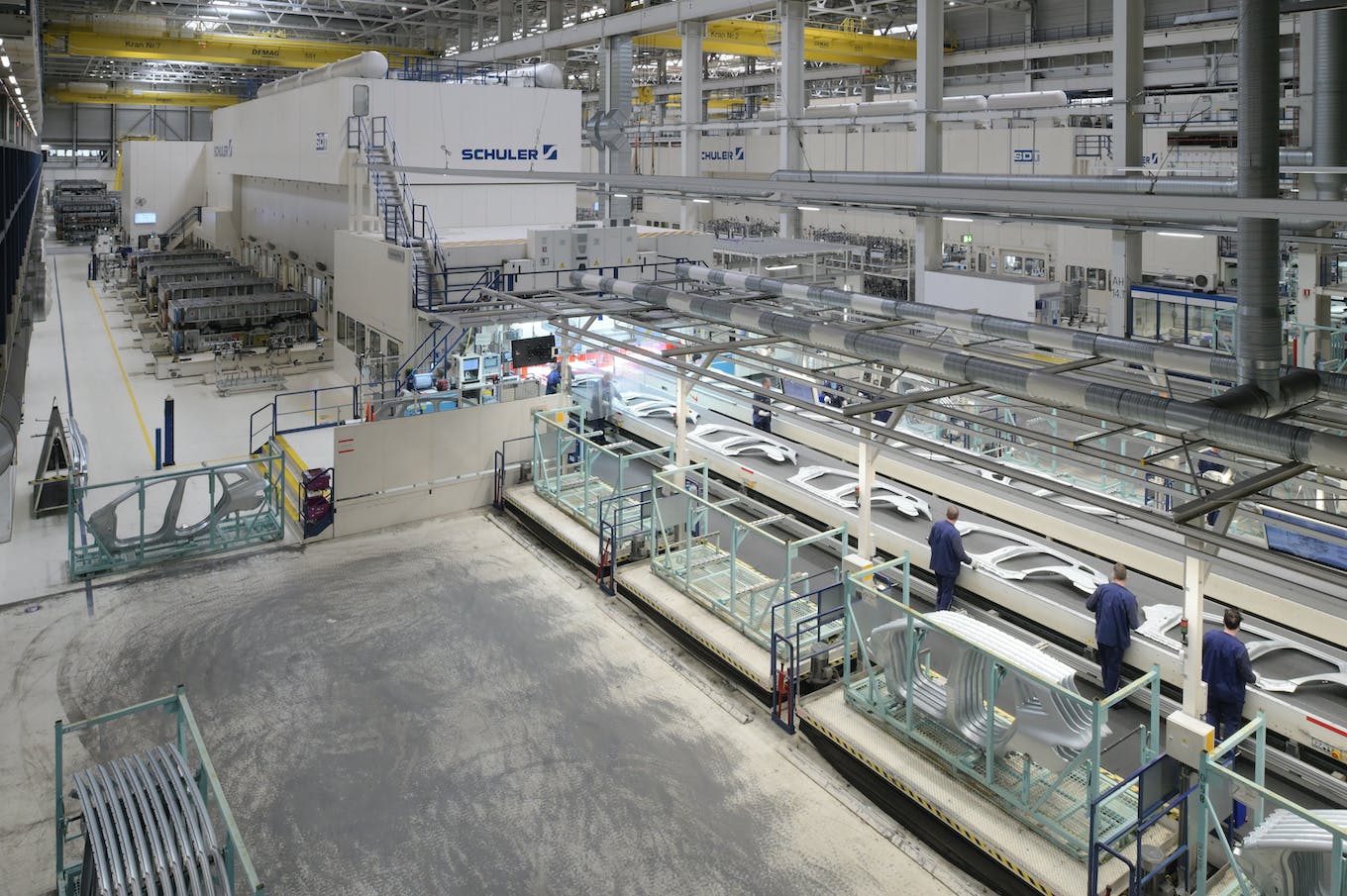 Carbon dioxide emissions from the production of secondary steel, usually made by recycling scrap steel, are on average 50 to 80 per cent lower than that of primary steel.

This is happening as the car maker steps up its expansion of electromobility. It plans to release about 10 million fully-electric vehicles onto the roads over the next ten years. By 2030, at least half of its annual vehicle sales will be fully electric. It took the wraps off its new technology flagship — the BMW iX — late last year.

Joachim Post, BMW purchasing and supplier chief, said that the additional procurement of green steel is an important step in substantially reducing CO2 emissions at source in its supplier network.

“The aim is to reduce the lifecycle carbon footprint of our vehicles with a holistic approach. With steel, in particular, we are leading the way by sourcing low-carbon steel for our plants in Europe in the future,” he said. 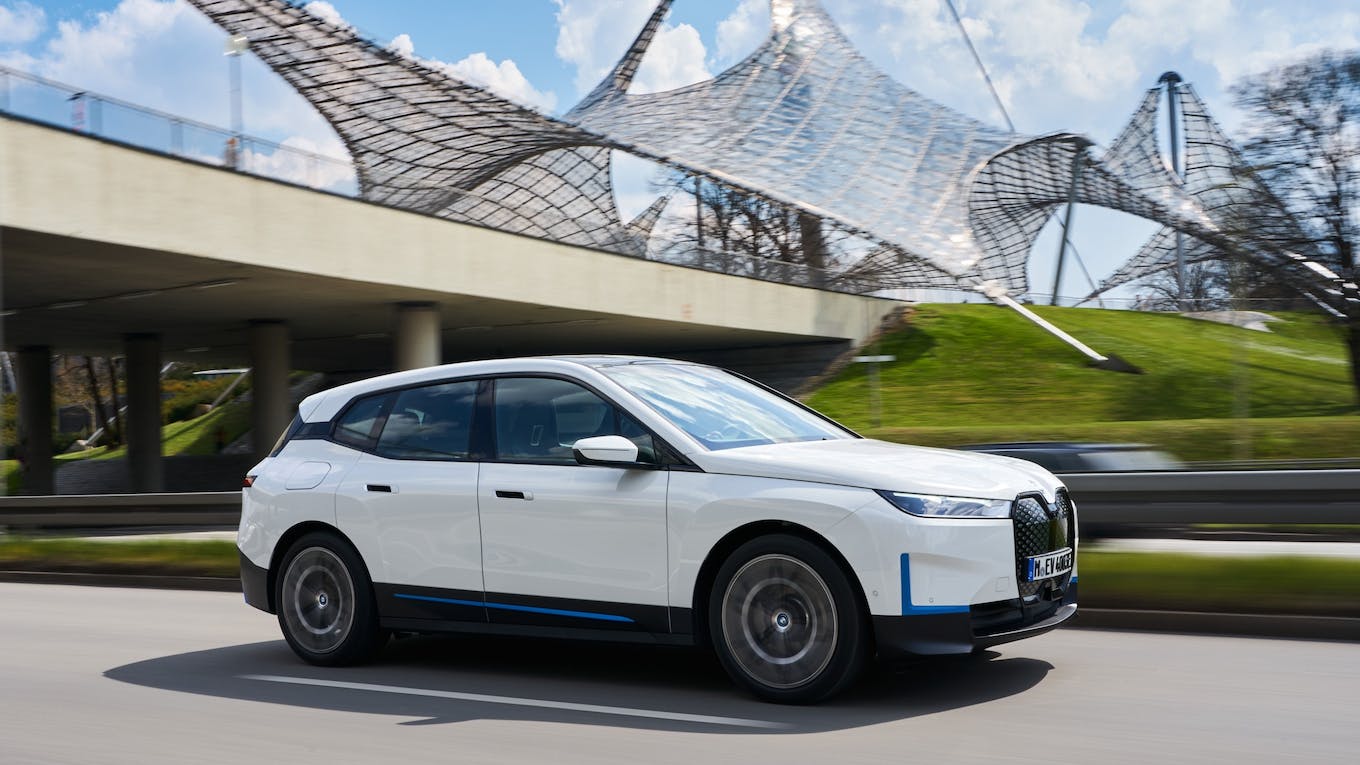 A McKinsey report on green hydrogen developments, published in January last year, states that steel could become one of the hydrogen’s lowest-cost decarbonisation applications. “With an optimised setup using scrap and hydrogen-based direct reduced iron (DRI), green steel could cost as little as US$515 per tonne, or a premium of US$45 per tonne of carbon dioxide equivalent, by 2030.”

At the BMW headquarters in Munich, its engineers and designers are also searching for solutions to better integrate alternative materials into newer car models. Last month, the car maker joined the Leather Working Group, an international non-profit that works to certify manufacturers and ensure strong environmental and social standards in supply chains globally. It is the second automaker to join the group.

Leather has been the premium choice for car seating since the first automobiles, and car makers acknowledge that it is hard to fully grasp what consumers think about alternative materials. Nadine Philippi, BMW Group’s head of sustainability in the supply chain, said that is why sourcing leather from certified facilities that meet current sustainable standards is a priority.

As a century-old heritage brand with a network of subsidiaries all over the world, the BMW Group also has to proactively challenge its suppliers to manufacture more efficiently. 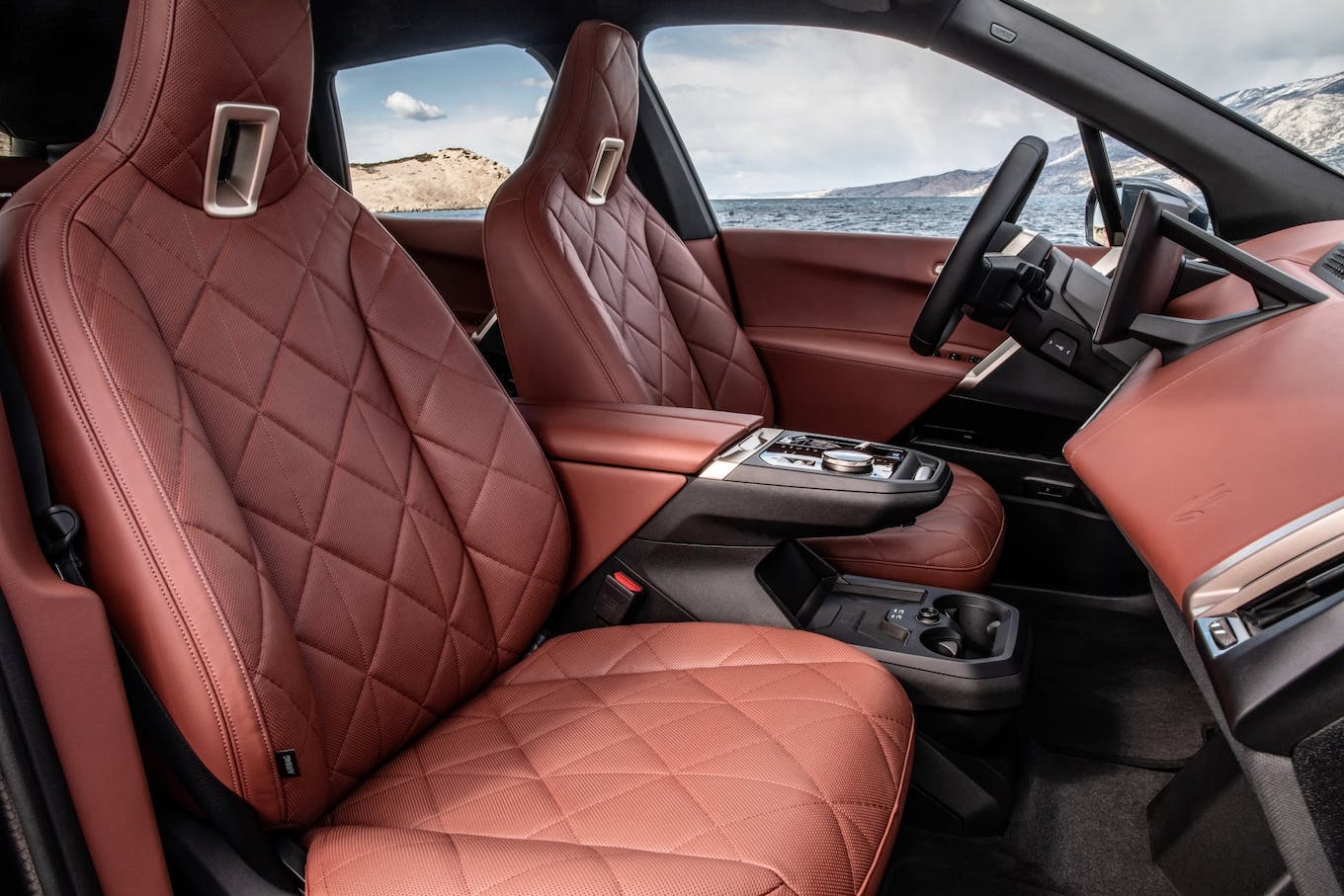 The natural-leather variants currently available as options in the BMW iX already meet the specifications of the Leather Working Group. Image: BMW Group

The Leather Working Group represents about a quarter of the world’s leather producers – from tanneries to leather-processing industries and associations, to retailers and buyers. It conducts audits to assess the environmental performance and compliance of leather manufacturing facilities and subcontractors along the value chain, and also offers certification standards for its members.

Amid the EV rush, prices for lithium, the critical component of the batteries that power the cars, have also rocketed, with experts describing the surge as “unsustainably high”. Demand for the metal is expected to quadruple over the next decade and the market could see a shortage as soon as 2023, according to Bloomberg NEF.

As it is possible that the vehicles wear out before batteries do, car makers are starting to lay the groundwork for a closed-loop battery supply chain, in a bid to salvage some end-of-life battery packs. Some companies are trying to develop their own battery technology.

But what do consumers want? 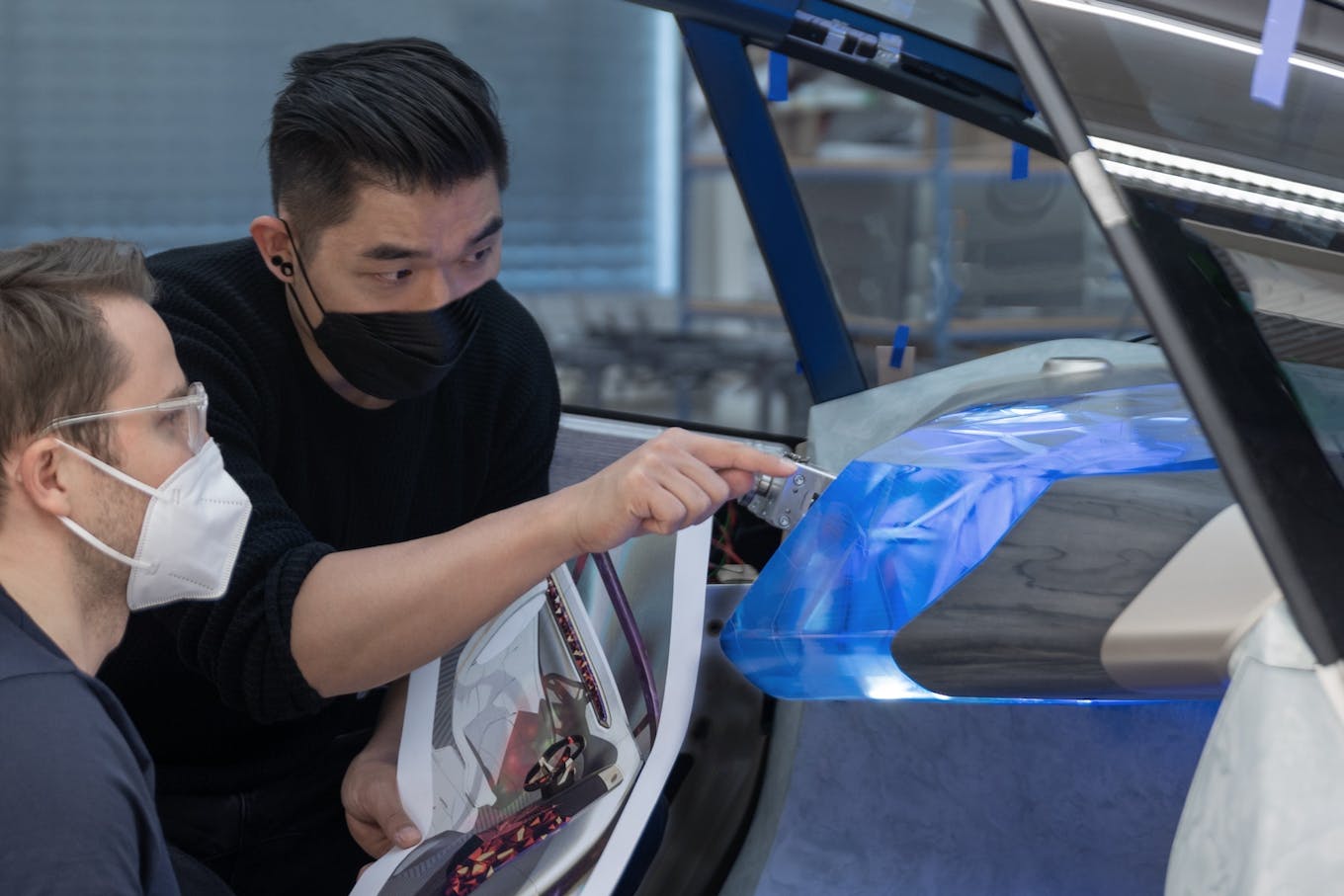 Engineers and designers working on the BMW i Vision Circular, a concept car that shows consumers what a vehicle produced using 100 per cent secondary materials might look like in tangible form. Image: BMW Group

As the market for EVs expands and consumers look to live in a more sustainable and greener environment, circular design principles will likely become more mainstream. The playing field will be leveled to a certain extent when it comes to range and performance, leaving sustainable production, quality and materials as the key drivers for EV purchases, said the BMW Group.

Through the BMW i Vision Circular, a concept car imagined by the same team which made the BMW iX, the auto maker hopes to reveal to consumers what a vehicle produced using 100 per cent secondary materials might look like in tangible form.

Displayed at the COP26 climate summit in Glasgow last year, the car model showcases, for example, how the number of parts used at the front end can be greatly reduced. Surfaces below its windscreen are made from secondary aluminium; the bumper area is manufactured from recycled plastic.

It is also a bid by the established carmaker to test the waters and gauge consumer response, as it tries to carve out a future against other competitors, including newcomers to the automotive market, as well as a large number of Chinese competitors desperate to grab market share.

Electrification is not the sole answer to the decarbonisation challenge. The automotive industry must also tackle emissions embedded in vehicle materials.

The BMW Group has pledged to release a battery model in every vehicle class by 2023, though it has also placed huge stock in hybrid plug-in models.

BMW’s chief executive Oliver Zipse, in an interview before the COP26 summit, explained why the car maker is prudent in its decisions on whether to phase out internal combustion engines completely. Responding to a question on why the group is taking a “nuanced approach” on electrification, he said that BMW is a customer-centric organisation and it responds to consumer needs, even as there are pressures to expand its electric fleet.

“We have to follow the market. We are gaining market share in the EV market, and we will keep a sustainable business approach,” he said.