The fear that Covid would kill corporate sustainability was overblown, study finds

The number of experts who think the pandemic has deprioritised sustainability has halved in a year. Biodiversity loss and inequality are eclipsing climate change as a key concern, while Unilever's reputation as a sustainability leader has withered, according to a new study.

When the Covid-19 pandemic started to squeeze the global economy in 2020, sustainability experts around the world feared that companies would deprioritise sustainability programmes — but that view has dramatically shifted this year.

A global study found that about half of sustainability experts surveyed last year believed that corporate sustainability would be sidelined as a result of the pandemic as the impact of the virus pushed many economies into recession. This year, as economies begin to rebound, one in four (24 per cent) now believe this will happen.

The SustainAbility Leaders Survey by research firm GlobeScan, which has been running since 1997, annually tracks the opinions of 700 sustainability experts from 70 countries to gauge sentiment on the sustainable development agenda.

Experts feel that the issue that will be most impacted by Covid in the long term is poverty and inequality, and believe that the outbreak has prompted more companies to focus on environmental issues, such as climate change and biodiversity loss.

A survey respondent from Hong Kong noted that Covid has highlighted the link between the destruction of the environment and the spread of disease.

GlobeScan’s findings echo new research from EcoVadis and Stanford Graduate School of Business that revealed that the majority of companies (93 per cent) have maintained or increased sustainability commitments during the pandemic.

The 2021 EcoVadis Sustainable Procurement Barometer report, published on Thursday, found that 69 per cent of procurers consider sustainability performance when selecting new suppliers and renewing contracts, up from just over half in 2019.

The importance of delivering on sustainability targets has more than doubled for company executives over the past two years, according to the findings.

Other studies this year have shown that companies in the Covid era are talking more about sustainability than ever before in corporate filings, although the credibility and transparency of many sustainability claims has come under greater scrutiny.

What are the most pressing issues?

Experts from the GlobeScan study rated climate change as the most pressing sustainability issue in 2021, although the sense of urgency required to take climate action has dipped year on year, while biodiversity loss has risen sharply as a key concern, as have poverty and water pollution. 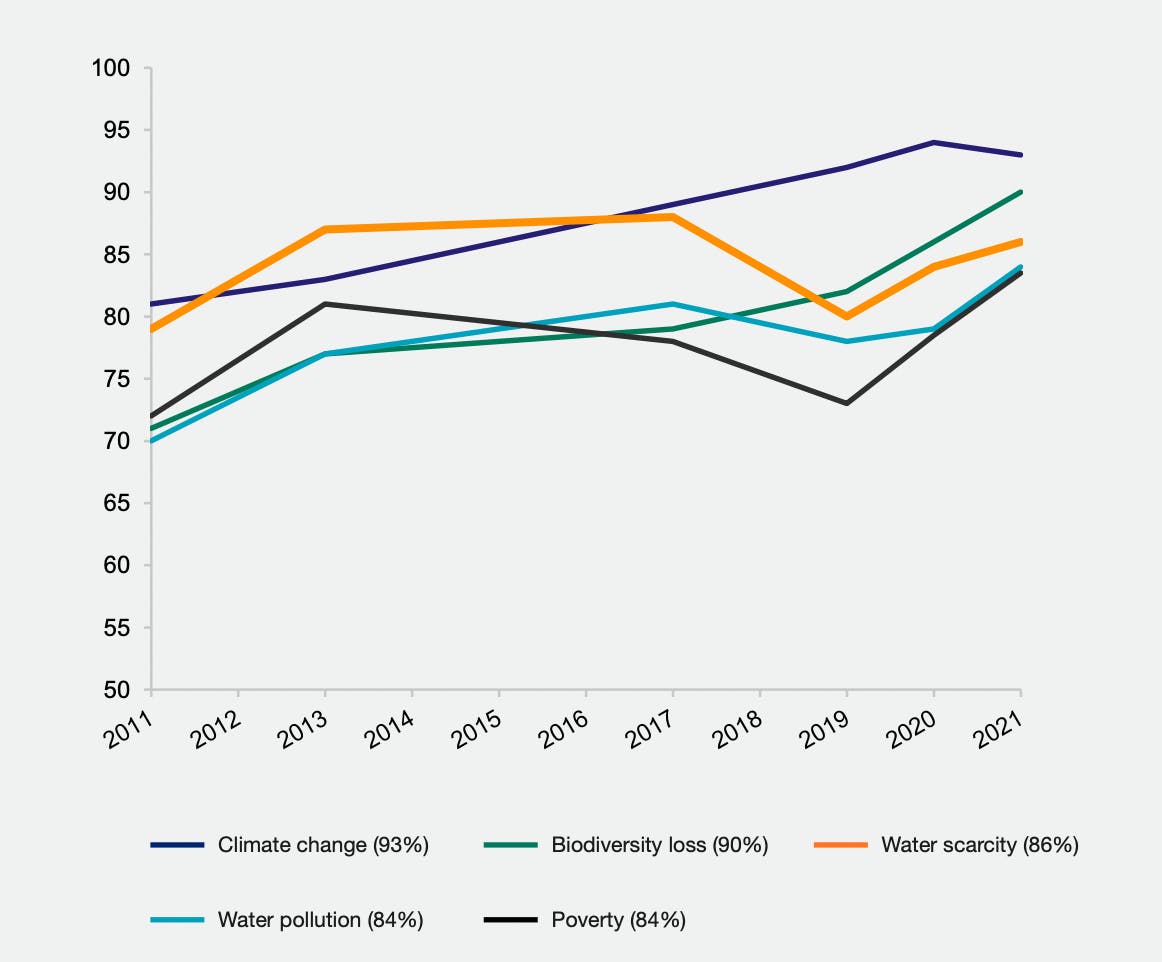 Almost every conceivable sustainability issue has become more worrisome for sustainability experts during the course of this year, with discrimination, inequality and the access to energy the fastest growing concerns, the research finds.

One respondent from the United States noted that the recovery from Covid has led to greater inequity due to vaccination disparities, and would further hinder the most vulnerable countries and communities.

A respondent in the EcoVadis survey commented: “Diversity has particularly come into focus – but that wasn’t because of the pandemic, that was more coming out of the US as a result of the George Floyd [an African American murdered by police, whose death triggered a global movement against discrimination] case. We’ve made a big commitment around diversity.”

The EcoVadis study identified human rights and labour rights to be the most pressing sustainability issue of the next two to three years, ahead of the environment.

Who is doing most to advance sustainability?

Unilever was rated as the company that is most successfully integrating sustainability into its business strategy, according to the GlobeScan research. But the leadership position of the owner of Ben & Jerry’s, Dove and PG Tips, whose chief executive Alan Jope recently attributed its strong financial performance in part to its sustainability-focus, has dwindled this year, with other firms closing the gap.

Outdoor clothing brand Patagonia, which has recently launched a new upcycling-based brand, is the second most recognised sustainability leader of 2021. However, the brand was “red-zoned” in a report by Changing Markets Foundation this month, due to “minimum-to-no transparency about their use of synthetic fibres”. Brazilian personal care firm Natura & Co is the fastest growing brand for sustainability credentials globally. 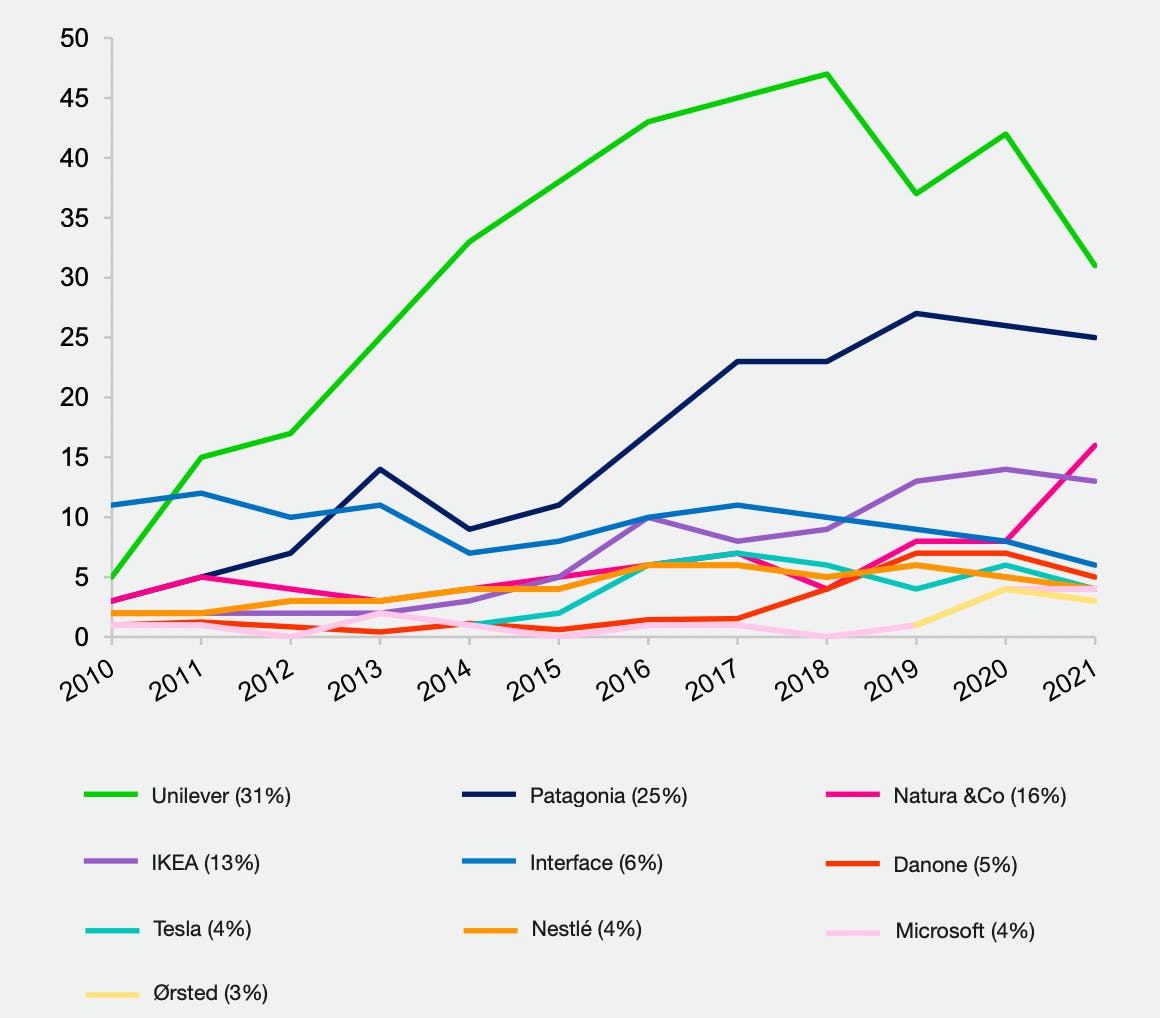 The companies most considered leaders in integrating sustainability into their business strategy. Respondents were asked to name three companies they admired for their sustainability credentials. Source: SustainAbility Leaders Survey 2021 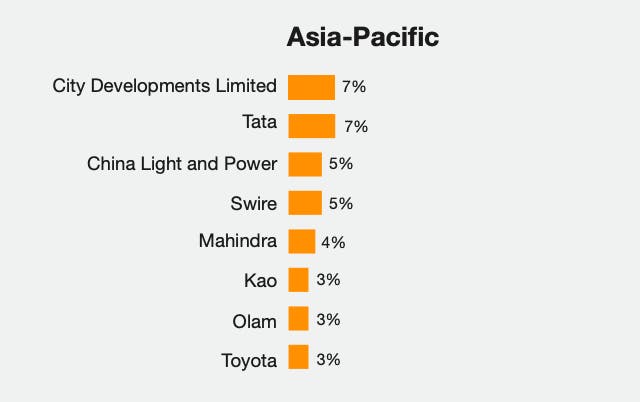 Percentage of sustainability experts who said companies in Asia Pacific were leaders in integrating sustainability into their business strategy. Source: SustainAbility Leaders Survey 2021

In Asia Pacific, Singapore-headquartered real estate firm City Developments Limited and Indian conglomerate Tata are the most regarded for integrating sustainability into their businesses.

However, the region’s most admired companies were mentioned less frequently than the top rated firms in other regions, for instance Unilever in Europe (33 per cent of mentions), Patagonia in the US (39 per cent), Natura & Co in Latin America (66 per cent), and Woolworths, a retail company in Africa and the Middle East (15 per cent).

The pandemic era has led to a shift in what are considered to be the traits of a corporate sustainability leader, according GlobeScan research. In 2019, companies with ambitious targets and commitments and “brand purpose” were the most highly rated among sustainability experts, whereas this year, firms with sustainability at the core of their business models and strategy are the most admired.

Non-government organisations were overwhelmingly regarded as the institutional actors that are doing most to advance sustainable development priorities. Since the 1992 Rio Earth Summit, a United Nations conference on environment and development, 61 per cent of respondents rated NGOs as doing a good job of advancing sustainability, compared to 47 per cent for citizen-led mass movements, 41 per cent for the United Nations, 21 per cent for the private sector. National governments are regarded as the least successful (7 per cent) on this front.

World Wide Fund for Nature was the most widely recognised NGO for its contribution to sustainable development, followed by Greenpeace and World Resources Institute.