Sustainability: Not a lone journey

Businesses achieve their sustainability goals when they are implemented through partnerships, says a new study by MIT, Boston Consulting Group and the United Nations Global Compact.

Companies are increasingly finding that engaging competitors, suppliers, governments and non-profit organisations is beneficial to achieving their sustainability goals, says a new global study on collaboration and sustainability.

The report, titled ‘Joining Forces: Collaboration and Leadership for Sustainability’, found that corporate sustainability is moving steadily away from ad hoc or “one-shot” initiatives towards a more strategic and transformational one that engage multiple players.

This latest study, released on January 12, is the sixth in a series of global executive sustainability surveys conducted by MIT Sloan Management Review (MIT SMR) in partnership with management consulting firm The Boston Consulting Group (BCG) and for the first time, the United Nations Global Compact (UNGC).

Georg Kell, executive director of the UNGC, said companies increasingly face complex uncertainties and risks related to social, environmental, and governance issues. “Many of these challenges - such as corruption, climate change, and discrimination - cannot be tackled by a single organisation, making it critical for companies to join together as never before,” he added.

Companies are realising that collaboration is critical to create the necessary impact in their initiatives due to the complex and global nature of sustainability issues. Among the 3,795 executives in 113 countries surveyed last year, 90 per cent echoed the sentiment: Businesses need to collaborate to address sustainability challenges.

Despite this consensus, only 47 per cent of them are actually engaged in sustainability-related partnerships, the report noted. The upside is that more than half or 61 per cent of these firms assessed that their collaborative efforts produced “quite” or “very” successful outcomes.

David Kiron, executive editor of MIT SMR and co-author of the report, said collaboration has yet to become common practice, but those who are doing it are focused on achieving big changes in their businesses and getting strategic results.

“More than half of reported collaborations aspire to fundamentally change the market in which the business operates, so sustainability efforts are much less likely to be discrete projects and much more likely to engage a company’s entire ecosystems – from suppliers and customers to governments and academic institutions,” explained Kiron.

The report also noted that companies are increasing the number of sustainability collaborations over time - and it will only grow in the near future.

In the latest survey, 37 per cent of respondents reported that their companies are active in 10 or more partnerships - and out of those - 10 per cent are involved in more than 50 such partnerships.

Meanwhile, 46 per cent of respondents expect their companies to engage in more than 10 sustainability collaborations in the near future.

But those firms which are more engaged in achieving transformational results in their sustainability goals tend to collaborate with a wider range of organisations, it added. 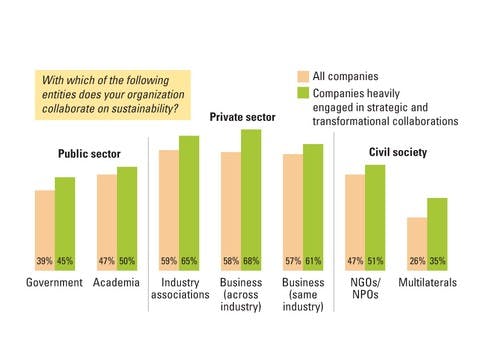 The report observed that the growing success of strategic collaborations also helped ease tensions between corporations and NGOs.

It cited the case of paper giant Asia Pulp and Paper‘s effort to address deforestation in Indonesia. After being widely criticised by environmental campaign groups, the world’s largest paper company has begun to work with their critics and are engaged in discussion on how to address the issue.

Companies are starting to see that when they provide a collective voice, share risks, and pool resources, they can deliver transformative solutions that benefit both business and society

Moreover, only 22 per cent of managers see their boards providing substantial oversight on sustainability issues as many still do not see sustainability’s financial impact and have a view that boards should focus more on shareholder value.

This lack of support from boards affect the performance of sustainability collaboration initiatives, the study said. It stressed that in firms where boards are perceived as active supporters, 67 per cent of respondents rate collaborations to be “very” or “quite” successful.

Knut Haanaes, a senior partner at BCG and also co-author of the report, suggested there are various ways boards can show leadership and be better engaged in sustainability issues.

This includes appointing members with sustainability expertise, creating an external advisory board, integrating sustainability into the duties of the overall board and established board committees, among others, explained Haanaes.

The research concluded that companies cannot succeed alone and the path to sustainability is “travelled with others”.

“Companies are starting to see that when they provide a collective voice, share risks, and pool resources, they can deliver transformative solutions that benefit both business and society,” said Kell.