Founder of non-profit organisation Women in Tech, the 19-year old feminist shares how she is pushing for the closure of the gender and technology gap in the Philippines.

Audrey Pe’s fascination for technology began five years ago, after her computer teacher in middle school departed from the lesson plan topic one day and let the class play a virtual game that taught coding for beginners.

She was so intrigued by the thought of being able to create her own computer programmes, that she spent her free time attending online courses to learn more about basic HTML and CSS since coding was not officially part of the curriculum.

Upon entering highschool, she was certain she wanted to pursue a degree related to science, technology, engineering, and mathematics (STEM) for college, but was discouraged by her peers who warned her she would be the only girl in a male-dominated course. It did not help that she could not think of any Filipina or female role model in the field.

The Philippines, I feel, is still such a patriarchal society where women are not expected to stand out too much. If we are too ambitious and if we show that we want more, we aren’t seen by men as desirable partners.

Pe decided to search online for women who had gained success in different STEM fields then decided to interview them and write about their achievements in a blog.

Instead of getting disheartened, the 19-year old feminist said she became angry.

“I asked myself, why are women underrated and underpaid just because of their gender? What can I do to make the space more inclusive? That’s when I decided to start WiTech,” Pe told Eco-Busines.

From a blog in 2016, Women in Tech (WiTech) grew into a non-profit that aimed to eliminate gender biases for women in STEM and to make technology and tech education more accessible to Filipinos from all sectors of society.

Since then, Pe and her team have organised conferences that provide a platform for women in technology, taught computer programming and gender equality to local public schools and underpriviledged areas in the Philippines, including war-torn Marawi City in Mindanao.

WiTech’s schedule has been so packed that Pe had to forego starting her freshman year at Stanford University in California last year to give her time to fully delegate operations of the organisation to the newly-appointed heads of the Philippine chapter.

In this interview with Eco-Business, Pe shares her plans for WiTech as she embarks on a new chapter in her education, and how she plans to break the glass ceiling for women in tech beyond the Philippines.

Now that you’re starting your freshman year in September, what are you going to study and how will this help your advocacy?

I don’t have to declare my major until sophomore year, but I’m interested in pursuing an interdisciplinary major called Science, Technology, and Society (STS), which deals with the intersections of STEM and the humanities, with a focus on studying how technology and society influence each other.

WiTech already has a chapter in New York, and I am excited to expand it further to California. Since Stanford is right next door to Silicon Valley, I also plan to approach the big tech companies to be donors for materials like brand new or secondhand laptops for under-resourced communities in the Philippines.

Why is it important for the Philippines to be more aware of gender equality, even if it has been consistently ranked as the most gender-equal country in Asia?

When I was researching for women role models in tech back in middle school, I found this book called Women Who Don’t Wait in Line by Reshma Saujani. I look up to her because she was the founder of Girls Who Code, a non-profit organisation in the US that organises summer training for teenage girls who want to learn computer programming. In the book, she told girls: ‘Be unapologetically ambitious.’ Reshma also gave a TED talk where she said girls need to be taught to be brave not perfect.

What she said in the book and her talk apply so much to the Philippines, which I feel is still such a patriarchal society where women are not expected to stand out too much. If we are too ambitious and if we show that we want more, we aren’t seen by men as a desirable partner.

I come from a Filipino-Chinese background where I’ve always felt under pressure to aspire for perfection; I’m not allowed to make mistakes. In our culture, you are discouraged from taking an untrodden path like tech, specially when you are a young teenage woman.

How can STEM courses in the Philippines be improved to be more inclusive?

In my experience, you usually see people in tech come from private schools and those who have wi-fi. We should lessen the barriers by making computers more accessible in public education, so that more low-income women can study STEM. Resources, curriculum, and legislation should not discriminate. By educating present generations of youth to believe in and push forward equality, we push the needle for future generations to grow up in less discriminatory societies.

Even if the gender gap in tech is narrowing, the digital divide is wider than ever. Covid-19 has shone a light on how the poorest in the country are left behind when they have no access to computers and an internet connection to continue their education.

The WiTech team is composed mostly of young women in highschool and college, whose interests lie in technology. How did you come together?

The WiTech core team is made up of mostly women, but we also have some men, aged 14 to 23 years old. Initially, we met through YouthHack Manila, an organisation that promotes tech and startup culture among the youth. But we eventually got bigger by meeting on social media and through common friends in school. Since 2018, we have held two conferences, where we feature women from various tech backgrounds like progamming, biotech, and digital marketing. Our keynote speeches have been storytelling sessions given by women from low-income backgrounds who have worked their way up in the field.

What is your most memorable experience of teaching about gender equality in technology? 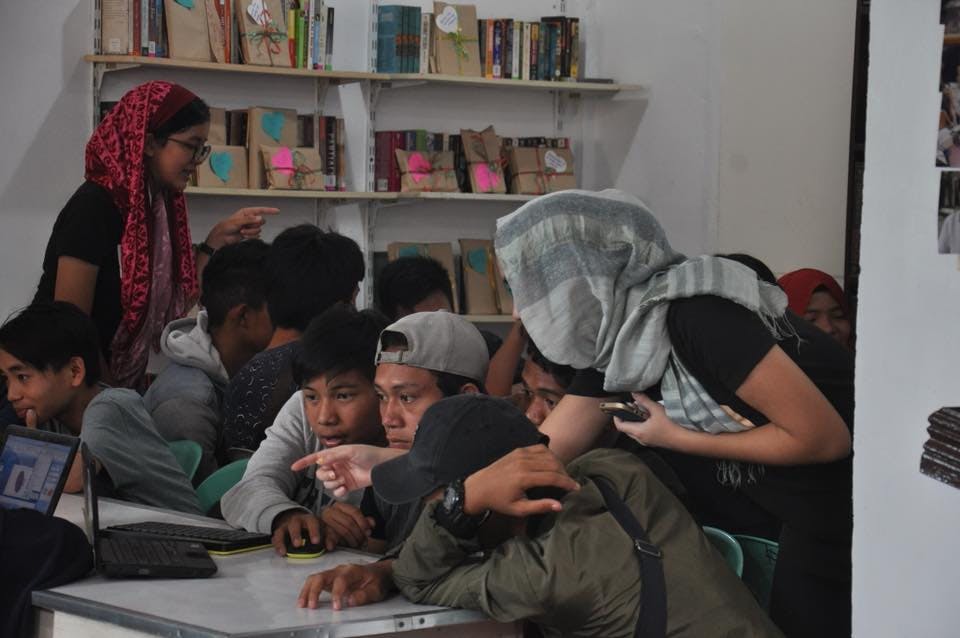 In 2018, a year after the end of armed conflict in Mindanao, a WiTech colleague and I travelled to Marawi to teach a one-day tech workshop on Microsoft Powerpoint and introductory computer science. It was memorable because it was always our goal to give tech access to a remote community, but this one was also recovering from war. We brought second-hand laptops and tech modules and left them at the school, so students could further their learning even after we left Marawi. After that programme, we’ve brought tech education to poor areas in Bohol and Quezon City and taught over 100 students about basic tech.

What do you see as the role of technology and gender during the Covid-19 pandemic?

People with tech access have been able to shift their education and livelihoods online. We’re seeing work from home setups and online classrooms that wouldn’t have been possible 10 years ago. It’s exciting. But it’s also important to remember that these kinds of opportunities and resources aren’t available to everyone. In terms of gender, staying at home has led to increased rates of domestic violence. All these issues are intersectional, so using social media to spread awareness of what’s happening is a step in starting conversations about tech, gender, and Covid-19.

How hopeful are you about the future of women in STEM in the Philippines?

I’m very hopeful. I’ve been in this space for four years, and I’ve noticed how conversations about women in technology are less taboo than they were before. I see growing audience turnouts at our conferences, there are more mixers or networking parties for women in tech, and when I go to big tech events, I see more women than there were four years ago.

But even if the gender gap in tech is narrowing, the digital divide is wider than ever. Covid-19 has shone a light on how the poorest in the country are left behind when they have no access to computers and an internet connection to continue their education. Our country needs more infrastructure to address this socio-economic gap.