State of the climate: Heat across Earth’s surface and oceans mark early 2019

Key findings from Carbon Brief's global climate data report show that this year is likely to be the second or third warmest year on record for all of the surface temperature series.

Global surface temperatures in 2019 are on track to be either the second or third warmest since records began in the mid-1800s, behind only 2016 and possibly 2017.

On top of the long-term warming trend, temperatures in 2019 have been buoyed by a moderate El Niño event that is likely to persist through the rest of the year.

Ocean heat content (OHC) set a new record in early 2019, with more warmth in the oceans than at any time since OHC records began in 1940.

The latest data shows that the level of the world’s oceans continued to rise in 2019, with sea levels around 8.5 centimetres (cm) higher than in the early 1990s.

Atmospheric methane concentrations have increased at an accelerating rate, reaching record highs in recent months, though scientists are divided on the cause of this trend.

Third warmest start to a year

Global surface temperatures are recorded and reported by a number of different international groups, including NASA, NOAA, Met Office Hadley Centre/UEA, Berkeley Earth and Cowtan and Way. Copernicus/ECMWF also produces a surface temperature estimate based on a combination of measurements and a weather model – an approach known as “reanalysis”.

The chart below compares the annual global surface temperatures from these different groups since 1970 – or 1979 in the case of Copernicus/ECMWF. The coloured lines show the temperature for each year, while the dots on the right-hand side show the year-to-date estimate for January through March 2019. Values are shown relative to a common baseline period, the 1981-2010 average temperature for each series. Surface temperature records have shown around 0.86C warming since the year 1970, a warming rate of about 0.19C per decade.

Year-to-date values are only shown for NASA, NOAA, and Copernicus as data for March is not yet available from the UK Hadley Centre, which also prevents the Berkeley Earth and Cowtan and Way records from being released. The year-to-date values in this chart will be updated when that data becomes available. 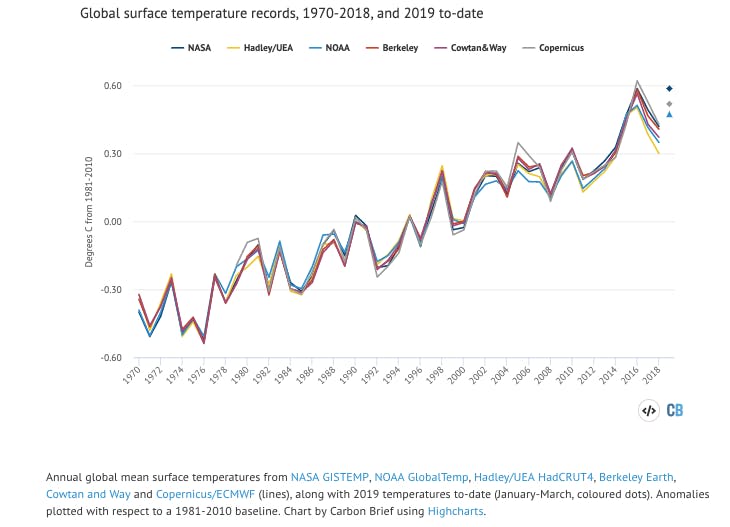 Based on temperatures in the first quarter, 2019 is likely to be the second or third warmest year on record for all of the surface temperature series. However, with only three months of 2019 available so far it is not out of the question that it could be the warmest year – or as cool as the fourth warmest on record.

The figure below shows how temperatures to-date compare to prior years in the NASA GISTEMP dataset (using its new version 4). It shows the temperature of the year-to-date for each month of the year, from January through the full annual average. 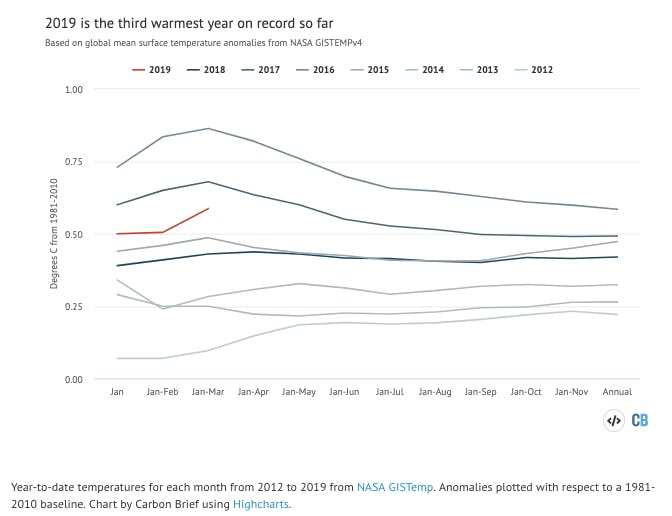 In the NASA dataset, 2019 has had the third warmest January-March average on record, after the record warm years of 2016 and 2017. However, while both of those years had cooler temperatures in the summer and autumn, this year may see a weak El Niño help current warmth persist. As a result, it is likely that 2019 will end up as the second warmest on record in the NASA dataset.

The first three months of 2019 have already been modestly warmed by a weak El Niño event. The majority of forecast models expect weak El Niño conditions to persist for the remainder of 2019, with sea surface temperatures in the tropical Pacific around between 0.5C and 1C above the recent average.

El Niño and La Niña events – collectively referred to as the El Niño Southern Oscillation, or ENSO – are the main driver of year-to-year variation on top of the long-term surface warming trend. ENSO events are characterised by fluctuations in temperature between the ocean and atmosphere in the tropical Pacific, which help to make some years warmer and some cooler.

The figure below shows a range of ENSO forecast models produced by different scientific groups, with the average for each type of models shown by thick red, blue and green lines. Positive values above 0.5C reflect El Niño conditions, while negative values below -0.5 reflect La Niña conditions. 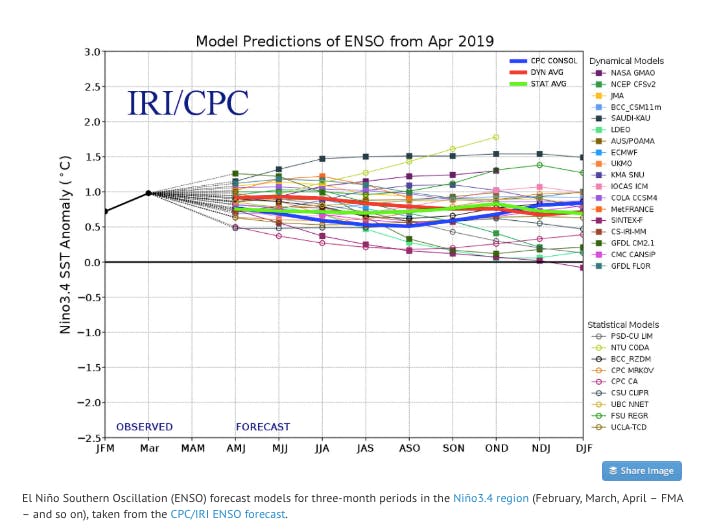 In general, El Niño periods tend to be warmer than other months, with the large warm patch in the tropical east Pacific transferring extra heat to the atmosphere. Similarly, La Niña events cool global temperatures. In both cases the effects tend to have a bit of a lag: the effect on global temperatures is small at the beginning of the event, and larger by the end – or slightly after.

The figure below shows the range of individual models forecasts featured in the IPCC fifth assessment report – known collectively as the CMIP5 models – between 1970 and 2020 with grey shading and the average projection across all the models shown in black. Individual observational temperature records are represented by coloured lines. 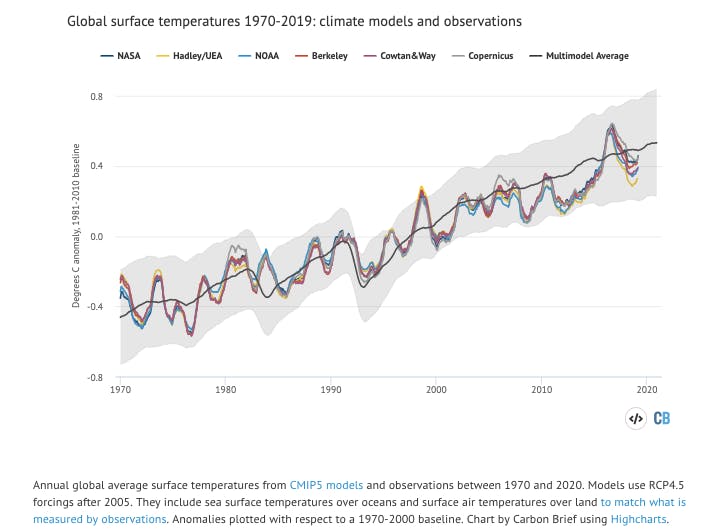 While global temperatures were running a bit below the pace of warming projected by climate models between 2005 and 2014, the last few years have been pretty close to the model average. This is particularly true for globally-complete temperature records such as NASA, Berkeley Earth and the Copernicus reanalysis that include temperature estimates for the full arctic. Temperatures were warmer than the multimodel average during the 2015-16 super-El Niño event and were a bit cooler during the 2018 La Niña. In recent months, temperatures have been ticking back upward.

Human-emitted greenhouse gases trap extra heat in the atmosphere. While some of this warms the Earth’s surface, the vast majority – upwards of 90 per cent – goes into the oceans. Most of this accumulates in the top 700 metres, but some is also mixed into the deep oceans.

Ocean heat content (OHC) estimates between 1940 and the present day for both the upper 700m (light blue shading) and 700m-2000m (dark blue) depths of the ocean are shown in the chart below. 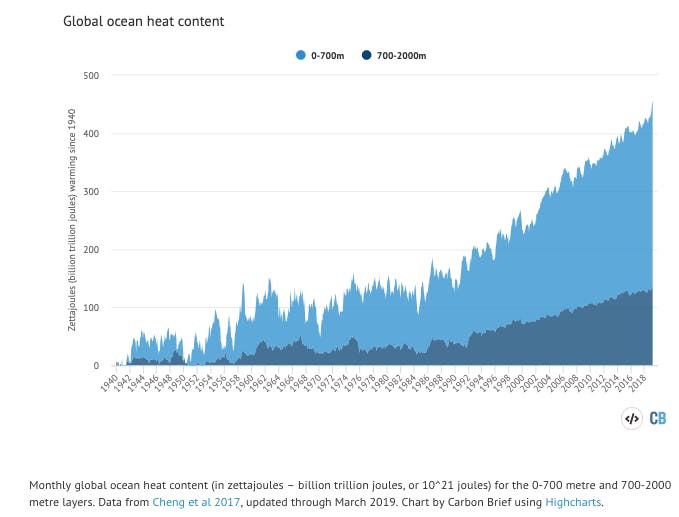 The first few months of 2019 have set new records for OHC, with a particularly pronounced jump in February and March 2019. Dr Lijing Cheng, an associate professor at the Institute of Atmospheric Physics in China and the lead researcher on the OHC dataset, tells Carbon Brief that the unusual jump was concentrated “below 300m at around 40N in the Atlantic Ocean”. He cautions against drawing conclusions from the last two months until researchers have had time to investigate and make sure the data is accurate.

In many ways, OHC represents a much better measure of climate change than global average surface temperatures. It is where most of the extra heat ends up and is much less variable on a year-to-year basis than surface temperatures. Most years set a new record for OHC and 2019 has been no exception so far, with the first three months showing the warmest OHC since records began.

Changes in the amount or rate of warming are much easier to detect in the OHC record than on the surface. For example, OHC shows little evidence of the slowdown in warming in the mid-2000s, seen in surface temperature records. It also shows a distinct acceleration after 1991, matching the increased rate of greenhouse gas emissions over the past few decades.

Modern-day sea levels rose to a new high in 2019 to-date, due to a combination of melting land ice – glaciers and ice sheets – and the thermal expansion of water as it warms.

The figure below shows the increase in global sea level since it was first measured by satellites in the early 1990s. The different coloured lines indicate different satellite missions over the years. Earlier sea level data from tide gauges is also available, with data going back to the late 1800s.

Sea level rise is sensitive to global surface temperatures; El Niño years where temperatures are a bit warmer tend to have more rapid sea level rise than La Niña years. For example, sea level increased rapidly from 2014 to 2016. However, these are relatively small fluctuations around the consistent long-term trend. Overall sea levels have risen around 8.5cm since the early 1990s, and around 22cm since the 1880s.

Sea level data is corrected for glacial isostatic adjustment –  the rebound of the Earth from the several kilometre-thick ice sheets that covered much of North America and Europe around 20,000 years ago. This adjustment is relatively small, only adding around 0.3mm/yr to sea level rise rates, or around 10 per cent of the current rate of sea level rise.

Atmospheric methane concentration increased rapidly from the mid-1980s through to the early 1990s, before slowing down and ultimately pausing in the late 1990s and 2000s. However, starting in 2008, levels of atmospheric methane begane growing again and have seen a notable acceleration over the past four years. The chart below shows concentrations of methane – in parts per billion (ppb) – from the early 1980s when global measurements were first available through to the present.

The cause of the increase in methane concentrations over the last decade is still a subject of scientific debate. Some studies have suggested that wetlands and rice cultivation in the tropics are the primary culprit and that the expansion of unconventional oil and gas extraction plays a limited role. Others argue that fossil fuels have had just as important a role in the increase as agriculture.

Unlike CO2, methane has a relatively short lifetime in the atmosphere, only lasting about nine years on average before breaking down into its component parts. This means that while CO2 keeps accumulating even if emissions remain flat, the amount of methane in the atmosphere is directly related to the rate of emissions. This means that increases in atmospheric concentrations in recent years reflect increases in methane emissions.

Arctic sea ice spent much of early 2019 at the low end of the historical range and has fallen to record lows for this time of year during the past month. Antarctic sea ice hit record lows in early January, though it has since recovered a bit. Both the Arctic sea ice winter maximum and Antarctic summer minimum in 2019 were the seventh smallest in their respective satellite records.

The figure below shows both Arctic and Antarctic sea ice extent in 2019 (solid red and blue lines), the historical range in the record between 1979 and 2010 (shaded areas) and the record lows (dotted black line). Unlike global temperature records, sea ice data is collected and updated on a daily basis, allowing sea ice extent to be viewed through to the present.

The chart below shows the average Arctic sea ice extent for each week of the year for every year between 1978 and 2019. (Prior to 1978, satellite measurements of sea ice extent are not available and the data is much less reliable.)

The figure shows a clear and steady decline in Arctic sea ice since the late 1970s, with darker colours (earlier years) at the top and lighter colors (more recent years) much lower. A typical summer now has nearly half as much sea ice in the Arctic as it had in the 1970s and 1980s, though 2012 still holds the record for the lowest summer minimum sea ice extent.