The bank, which has loaned US$1.8 billion to coal power projects since 2010, announced today that it will not fund any more coal-fired power plants.

Standard Chartered published a new power policy revealing the news on Tuesday, and becomes the first Asia-focused bank to rule out new coal development in the world’s biggest region for extraction and burning of the fossil fuel for energy.

The move means that the bank will back out of three deals to finance coal power plants in Vietnam, the world’s third largest coal hotspot.

The bank revealed its intention to move away from coal when it withdrew from a financing initiative for a massive coal plant in Vietnam in April following pressure from green groups. 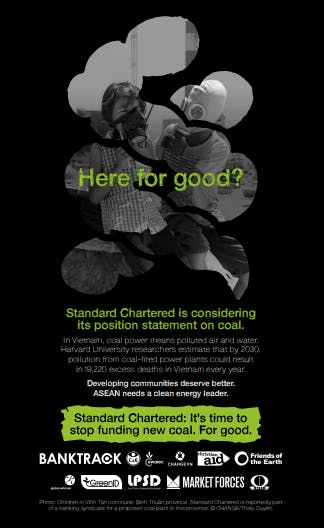 An advertisement from a consortium of NGOs calling on Standard Chartered Bank to quit coal.

Standard Chartered’s statement on fossil fuel power reads: “We will not directly finance any new coal-fired power plant projects, including expansions, in any location.”

The policy contrasts those made by other banks in the region this year, which have ruled out financing new coal power, but crucially not in developing markets such as Vietnam and Indonesia, Southeast Asia’s two largest coal-producing countries.

Standard Chartered has loaned US$1.8 billion to coal projects since 2010, including US$820 million to projects that added 10.6 gigawatts of additional coal power capacity, according to data from Market Forces.

The bank’s announcement shows “what leadership on coal and climate change looks like,” commented Julien Vincent, executive director of Market Forces, one of the non-government organisations behind a major push this year to steer banks away from coal.

“Decisions about how the world sources its future energy needs will make or break our ability to contain global warming. Standard Chartered’s policy not only removes a critical source of finance for new coal power plants, but sends a powerful signal to its competitors,” said Vincent.

While other banks have “fiddled around the margins” with their coal policies, leaving the opportunity open for coal deals of certain types and in some markets, Vincent noted that StanChart’s policy is the only one that pulls away from coal completely.

Standard Chartered follows the likes of international finance giants Societe Generale and Deutsche Bank to quit coal. Japan’s banks have also started to move away from coal with new climate policies, although they continue to back projects domestically and overseas.

Southeast Asia’s biggest banks, DBS and OCBC, have made new commitments on coal this year, but DBS’ policy did not rule out financing coal in developing markets, while OCBC’s policy was only applicable to financing coal plants that use low-efficiency subcritical technology or low-grade brown coal as the main fuel source.

Banks in this region have repeatedly argued that coal is needed to fuel the development and economies of developing countries in Asia.