Coal is in decline globally, but Asia is driving new plant development

Coal may be in decline worldwide, but 13 of the top 20 countries building new coal capacity are Asian, led by China, India, Vietnam, Indonesia and Bangladesh, a new study has found.

While the number of coal-fired power plants built worldwide has fallen over the past two years, Asia leads the world in building new coal power.

The study also revealed Asia to be the world’s biggest coal-producing region; 85 per cent of new coal power in development in the top 20 coal-producing countries is in Asia, according to the report.

Burning coal is the single biggest contributor to greenhouse gas emissions globally, and so is a major driver of climate change.

China continues to lead the world in the amount of coal power capacity under development, despite tightening restrictions on new coal plant projects by the Chinese authorities.

The new restrictions were followed a period of rapid expansion of the coal sector in China from 2016 to 2017 when it commissioned 692 GW of coal-fired capacity—more than twice the amount in the rest of the world combined.

Meanwhile, India added 152 GW of coal power capacity from 2006 to 2017, second only to China, despite a broad retreat from coal financing by private capital in the country and a freeze on coal plant construction introduced in 2017.

But campaigners are still optimistic, saying coal plants coming online only reflect projects initiated more than five years ago when coal-fired power generation was booming in these countries.

Myllyvirta maintained that China and India are still the main drivers of the downward trend for coal power.

“If we look at consumption of coal, the main drivers are rapid growth in clean energy, slower power demand growth due to shifting economic structure and energy efficiency. China, the United States and the UK have been the main drivers of the fall in global coal consumption from 2013 to 2017, the uptick last year notwithstanding,” the  Greenpeace campaigner added.

He said he expects China and India to stop investing in new coal plants and speed up retiring its oldest and most polluting plants.

China and India are also emerging as leaders in building renewable energy, which is crucial to maintain and accelerate the shift away from coal both for the sake of domestic air quality and the global climate, Myllyvirta added. 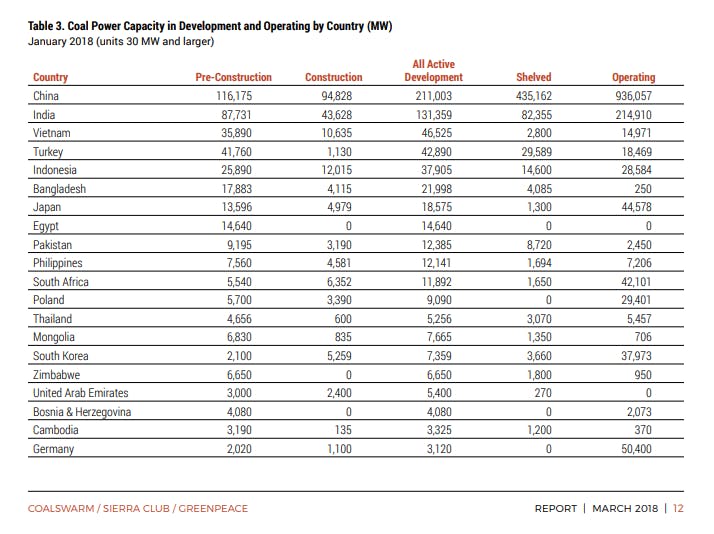 Despite the decline in the new coal plant pipeline, the report warned that projected emissions from today’s existing coal plant fleet will exceed the carbon budget for coal needed to meet the 2015 Paris Climate Agreement, which aims to keep a global temperature rise below 2 degrees Celsius above pre-industrial levels.

“From a climate and health perspective, the trend toward a declining coal power fleet is encouraging, but not happening fast enough,” said Ted Nace, director of CoalSwarm.

According to the report, progress must be accelerated, including canceling coal power projects under development and hastening retirement of aging coal fleets in Europe and the US.

Andrew Higham, chief executive officer of Mission 2020, a group aimed at driving down emissions to net zero, by 2050, identified six milestones that need to happen by 2020 to achieve Paris targets, including for renewables to outcompete fossil fuels as new sources of electricity.

In a webinar with Climate Tracker, which is composed of a network of climate journalists around the world, Higham said apart from no new coal-fire plants should be approved beyond 2020 and all existing plants should be in the process of being retired, renewable energy financing must be ramped up to US$700 billion.

Renewables should also make up at least 30 per cent of the world’s energy supply by 2020, by ensuring that markets are designed to enable the growth of renewable energy, Higham said.

He added that storage solutions would need to become readily available as back-up for a completely renewable energy supply.

“What we do in the next three years is most crucial for us to achieve targets because of the accumulation of greenhouse gases in the atmosphere,” he said.