Philip Hammond, the UK’s chancellor, has delivered his first – and last – spring budget, with a speech to parliament that was light on content relevant to energy and climate change.

One of his most prominent announcements was a review of tax relief for the North Sea oil and gas sector, a move trailed in several papers earlier today.

Hammond will also scrap the levy control framework for low-carbon subsidies, but he avoided setting out the details of any replacement until “later in the year”. He put off changes to the UK’s carbon price until his autumn 2017 budget. All future budgets will be made in autumn. Note that previous “autumn statements” were made in November each year.

Subjects not mentioned in the budget include flooding, shale gas (a favourite of former chancellor George Osborne) and a diesel scrappage scheme, which campaigners say is needed to tackle the UK’s chronic air pollution. Hammond also did not mention renewables or carbon targets, in a lightweight budget document that clocked just 68 pages, compared to 148 in last year’s version.

Carbon Brief runs through the climate and energy announcements in today’s budget.

As expected, the chancellor outlined new plans to help the fossil fuel industry maximise extraction of the last remnants of North Sea oil and gas. This comes after calls for the government to revise the tax treatment in order to allow firms to buy older sites from big players, such as BP and Shell, without becoming accountable for the huge sums involved in decommissioning them.

Hammond said in his speech: “As UK oil and gas production declines, it is absolutely essential that we maximise exploitation of remaining reserves.”

While current policy allows the Treasury to help with decommissioning by paying back some of the tax paid over the years by the big firms, it doesn’t allow this to be paid back to newer firms who may have bought the sites, but haven’t been the ones to pay tax on them in the past.

As a result of decommissioning tax relief, some oil North Sea businesses are now net recipients of taxes. For example, taxpayers handed Shell £85m in 2015, in repayment of previously paid taxes.

Hammond said the government will publish a formal discussion paper “in due course” to determine the best approach for maximising exploitation of North Sea reserves. The government will also establish an advisory panel of industry experts to “ensure appropriate scrutiny of the options”. The review will report at the next budget in the autumn. 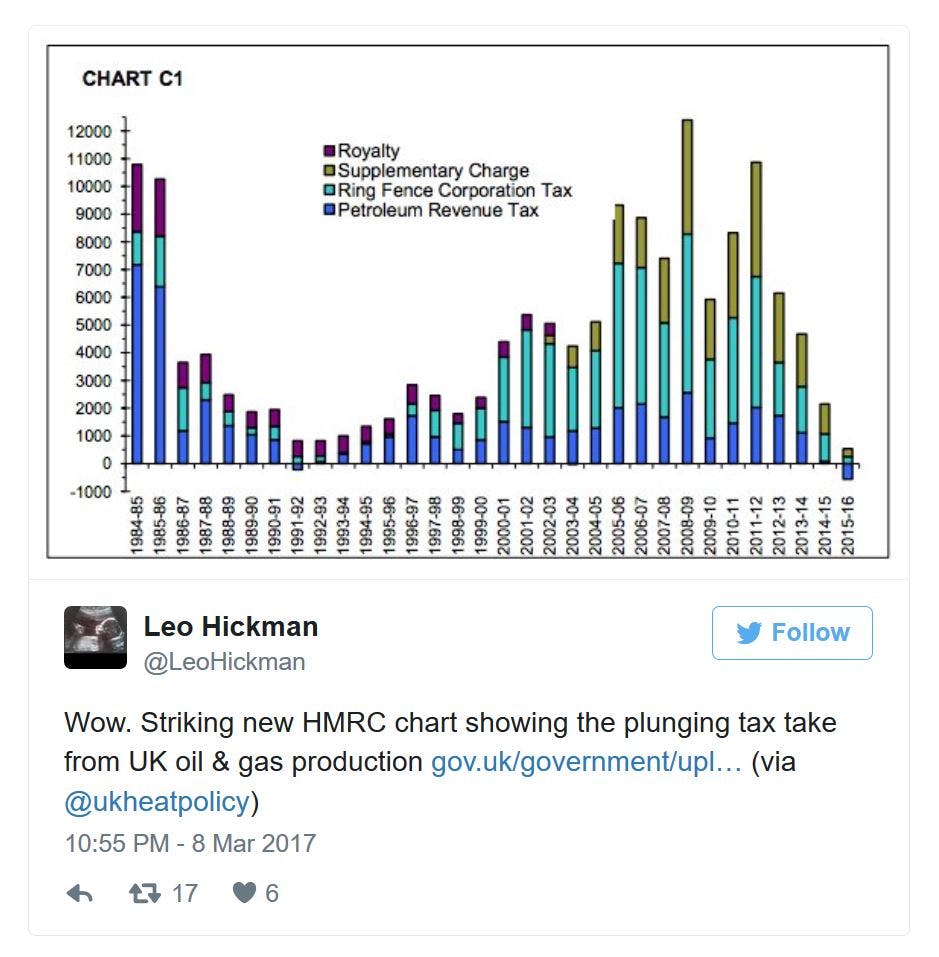 The OBR has also significantly downgraded its forecasts for North Sea corporation tax income, expecting receipts of just £1.5bn in 2019-20, for example, compared to the £2.2bn it forecast last November. 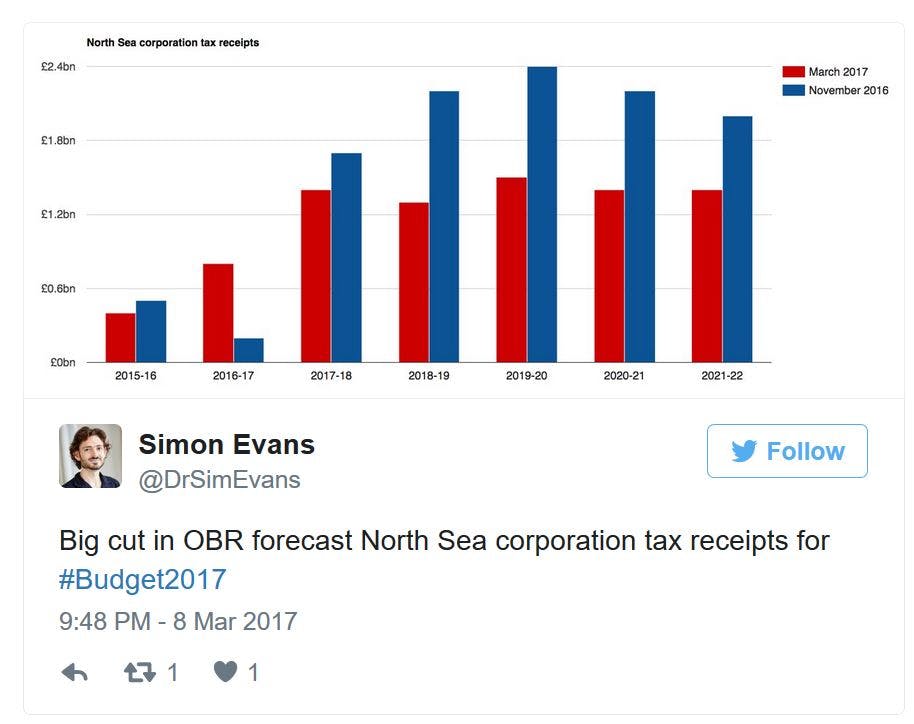 It appears that this shift could relate to changes in tax-take forecast models, rather than a change in underlying revenues or tax rates.

Though Hammond did not mention it in his speech, the budget document revealed that the levy control framework (LCF) will be scrapped. Had the LCF continued, it would inevitably have had to increase, given existing commitments to renewables and the Hinkley C new nuclear scheme.

The LCF has come in for sustained criticism for failing to fulfil its stated aims of controlling costs for consumers and offering certainty to low-carbon investors. The scheme has also been beset by a chronic lack of transparency, despite Carbon Brief‘s on-going efforts under Freedom of Information rules.

Last year’s budget offered £730m of funding for offshore wind coming online in the early 2020s, with auctions to be be held from this summer. Yet the overall LCF budget cap has only been fixed out to 2020/21. As recently as December, the government had promised to set out the future of the LCF in today’s budget.

Meanwhile, the OBR has raised its forecast for LCF spending in the early 2020s, with increases across several subsidy schemes including the Renewables Obligation, Contracts for Difference and the Capacity Market. 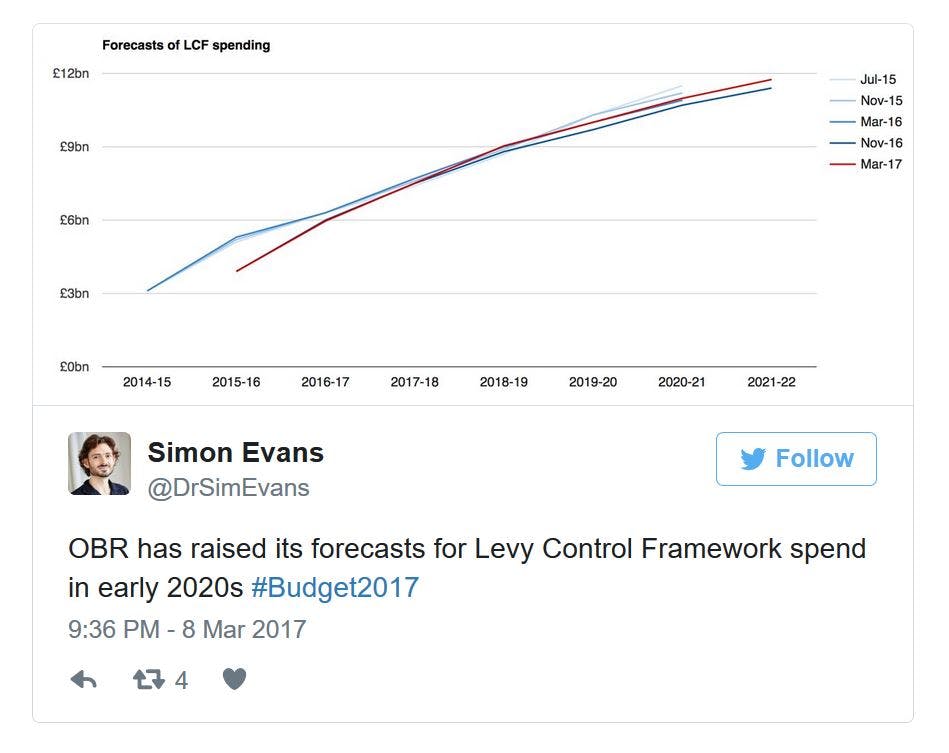 The chancellor also avoided setting out the long-term trajectory for the UK’s top-up carbon tax, the carbon price floor, which is currently fixed at £18 per tonne of CO2 until 2021. This timeframe had been extended by one year at Budget 2016.

The government now says that it will reform the current system, under which the price paid by UK firms is set by a floating market price under the EU Emissions Trading System (EU ETS) and a fixed carbon price floor.

This reform, starting in 2021-22, will target the total carbon price. The government insists that it “remains committed to carbon pricing to help decarbonise the power sector”. The carbon price floor was one of the most significant factors in last year’s 52% cut in UK coal use. 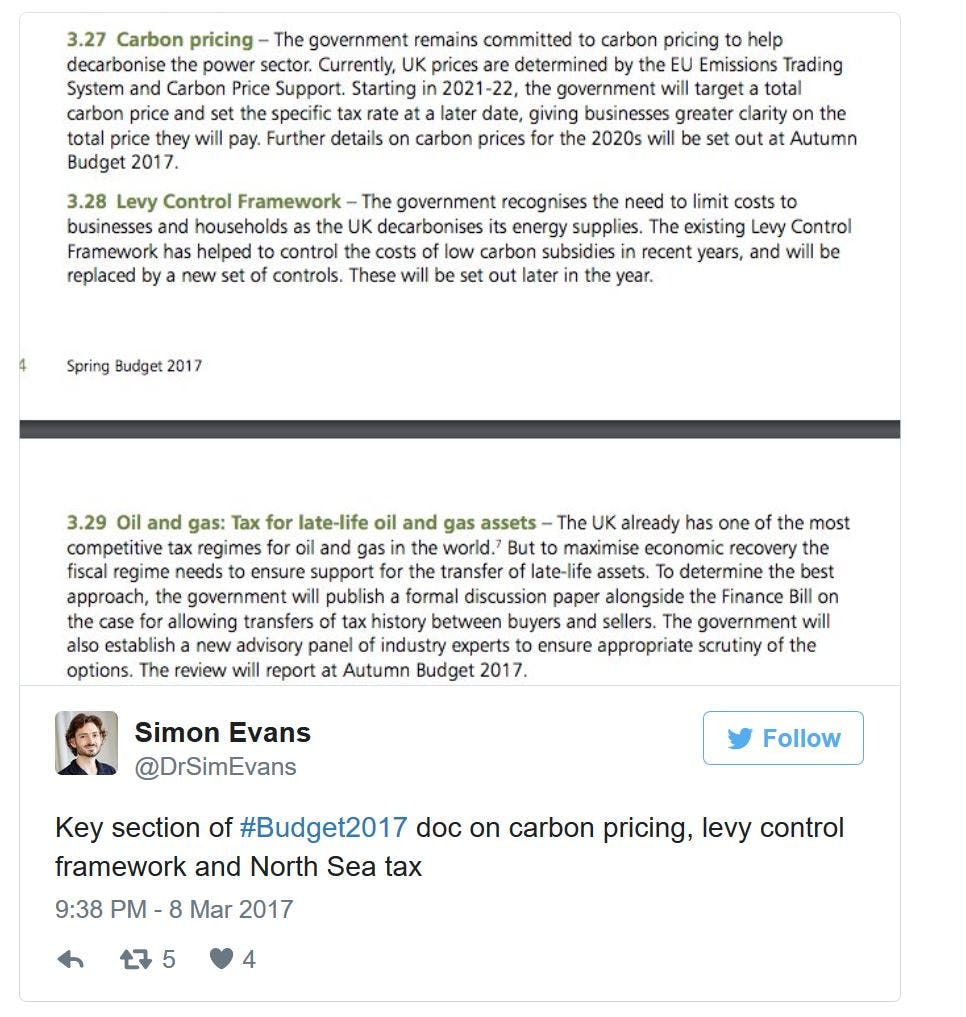 Hammond did not mention the planned phaseout of unabated coal by 2025. Any changes to the UK carbon price regime will have implications for how and whether this phaseout is achieved.

No explicit sum was set aside for the development of electric cars, as opposed to the last budget, which earmarked £390m into ultra-low emissions vehicles, renewable fuels and driverless cars by 2020-21.

However, a new Industrial Strategy Challenge Fund will be used to support collaborations between business and science, with an initial £270m in 2017-18 set aside for the development of disruptive technologies.

The budget document shows this includes development of batteries for electric vehicles – which it says will help to tackle air pollution – and artificial intelligence and robotics systems for use in extreme and hazardous environments, such as in offshore and nuclear energy.

The government also said it will continue to explore “the appropriate tax treatment” for diesel vehicles, adding that it will engage with stakeholders ahead of making any tax changes in this year’s autumn budget. 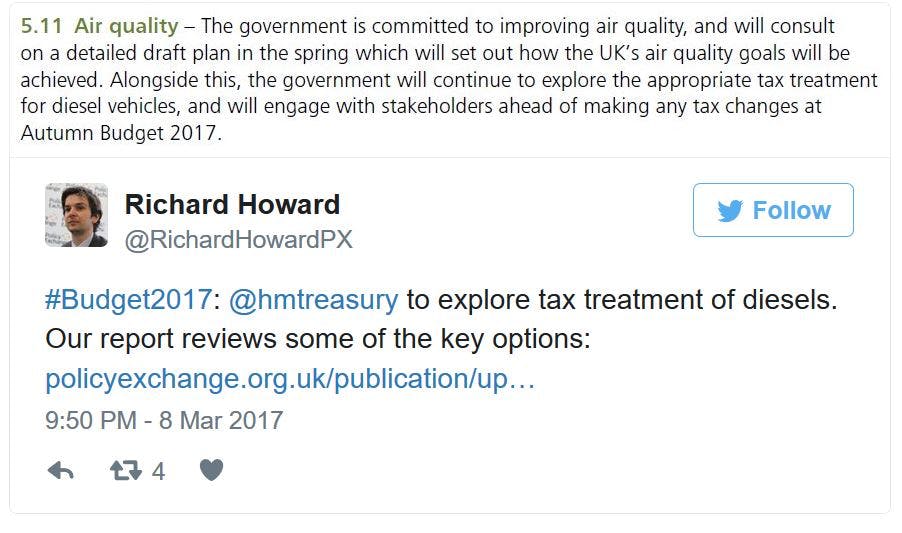 However, some were unimpressed. ClientEarth’s chief executive James Thornton criticised Hammond for failing to even mention the UK’s air quality in his statement to MPs and for a “gaping hole” where diesel measures should have been.

Meanwhile, among new details unveiled on the National Productivity Investment Fund (NPIF) – the “financial backbone” behind the government’s Industrial Strategy – was a pledge to give £690m to local authorities to “get local transport networks moving”.

Responding to this news, Trevor Hutchings, director of advocacy at WWF-UK, said this must be used to tackle air pollution rather than funding “more vehicles on the road.” He added: “There must be a clear transition towards electric vehicles.”

No further freeze was announced on fuel duty, with the budget document tables showing forecast tax take from drivers unchanged compared to expectations in November.

The 2016 Autumn statement froze fuel duty for the seventh year running – a stagnation which has benefited drivers with an effective tax cut since 2010 to the tune of £4.5bn a year. 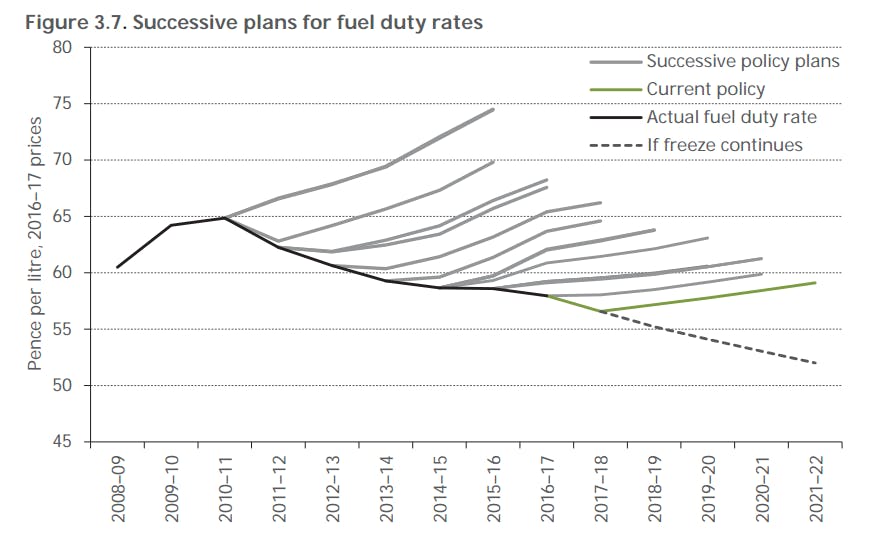 However, Hammond laid out a five-year freeze on the vehicle excise duty and road-user levy paid by heavy goods vehicles.

The budget statement also says the government will work with industry to update the road levy so it “rewards hauliers that plan their routes efficiently, to incentivise the efficient use of roads and improve air quality”, with a planned launch this spring of a “call for evidence” on updating the levy.

Despite some expectations that more details might be given on the sale of the Green Investment Bank (GIB), Hammond failed to mention it in his speech. The accompanying budget document confirmed only that the sale process is “ongoing”.

Last week, a rival bidder launched a legal challenge to the government’s decision to select Australian investment bank Macquarie as the preferred bidder for the bank.

Despite some hopes the chancellor may have announced a drop in a planned business rate hike in April on organisations using their own rooftop solar, he did not mention it in his statement.

Paul Barwell, chief executive of the Solar Trade Association, said his organisation is “dismayed” that the rise in business rates will still apply, noting: “Some fossil fuel technologies are already exempt from business rates.”

A series of Freedom of Information requests released last week by Green party peer Baroness Jones suggested that schools in England and Wales with solar panels installed will have to pay £1.8m extra in tax, because of the business rate changes.

Doug Parr, UK policy director at Greenpeace UK, added that a £300m discretionary support fund announced by the chancellor to support local authorities in alleviating the worst effects of the change in business rates is “just a drop in the ocean”. He added: “People trying to do the right thing and generate their own renewable energy, are going to be hit by massive bills.”