Spoilt for choice, will Singaporeans switch to green power?

The liberalisation of Singapore's electricity market has given consumers the freedom to choose their electricity providers. Will price comparison platforms like Voltz help Singaporeans switch to green energy?

From 1 November, Singaporeans were given the power to choose their electricity provider. This is a first for Singapore residents—households have only been able to buy electricity from the national provider until now.

The liberalisation of the electricity market, known as the Open Electricity Market (OEM), was announced by the Energy Market Authority (EMA) in September. It will allow consumers to choose from 13 licensed residential retailers—buying electricity will now be like shopping for a telco data plan. 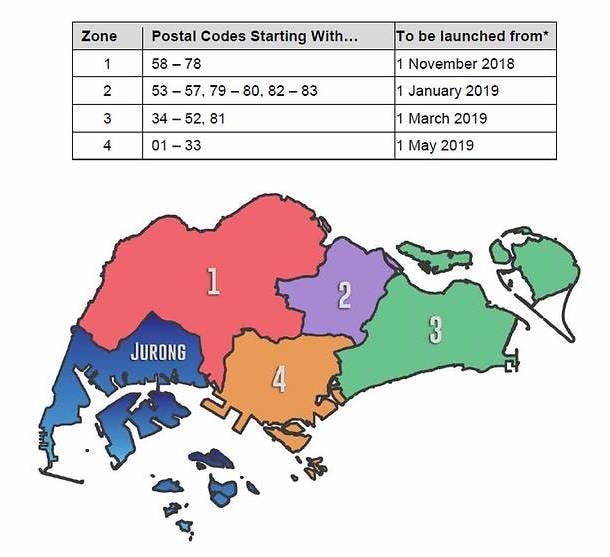 The nationwide roll-out of the Open Electricity Market occurs in stages according to postal code zones, and will encompass all households by 1 May. Image: Energy Market Authority.

The pilot phase of the OEM—which began in April—has seen 30 per cent of consumers switch from national provider SP Group to other retailers.

The most likely reason for switching is cost. Singaporeans griped about rising electricity tariffs imposed by SP Group earlier this year, and the OEM presents an opportunity for consumers to reduce their electricity bills by 20 per cent or more, according to EMA chief executive Ngiam Shih Chun.

With consumers spoilt for choice, confusion over the numerous options could prove a barrier for new retailers on the block. So providing the best user experience will be key to facilitating the switch to a new retailer. Currently, the challenge is the lack of a convenient platform for consumers to shop for electricity. To bridge this gap in the market, price comparison platforms such as Voltz Energy have popped up to make the decision process easier.

Voltz provides an overview of all the available electricity offerings, allowing consumers to compare plans, promotions and bundled deals in real time. This reduces confusion and saves consumers the time and hassle of having to do their own research when choosing a retailer.

Small-to-medium enterprises (SMEs), whose electricity consumption tends to be lower, lack awareness about the OEM and the retailer options available, Wicknesh Maratheyah, managing director of Voltz, told Eco-Business. The price comparison platform can prove useful in educating not just residential consumers, but SMEs too. 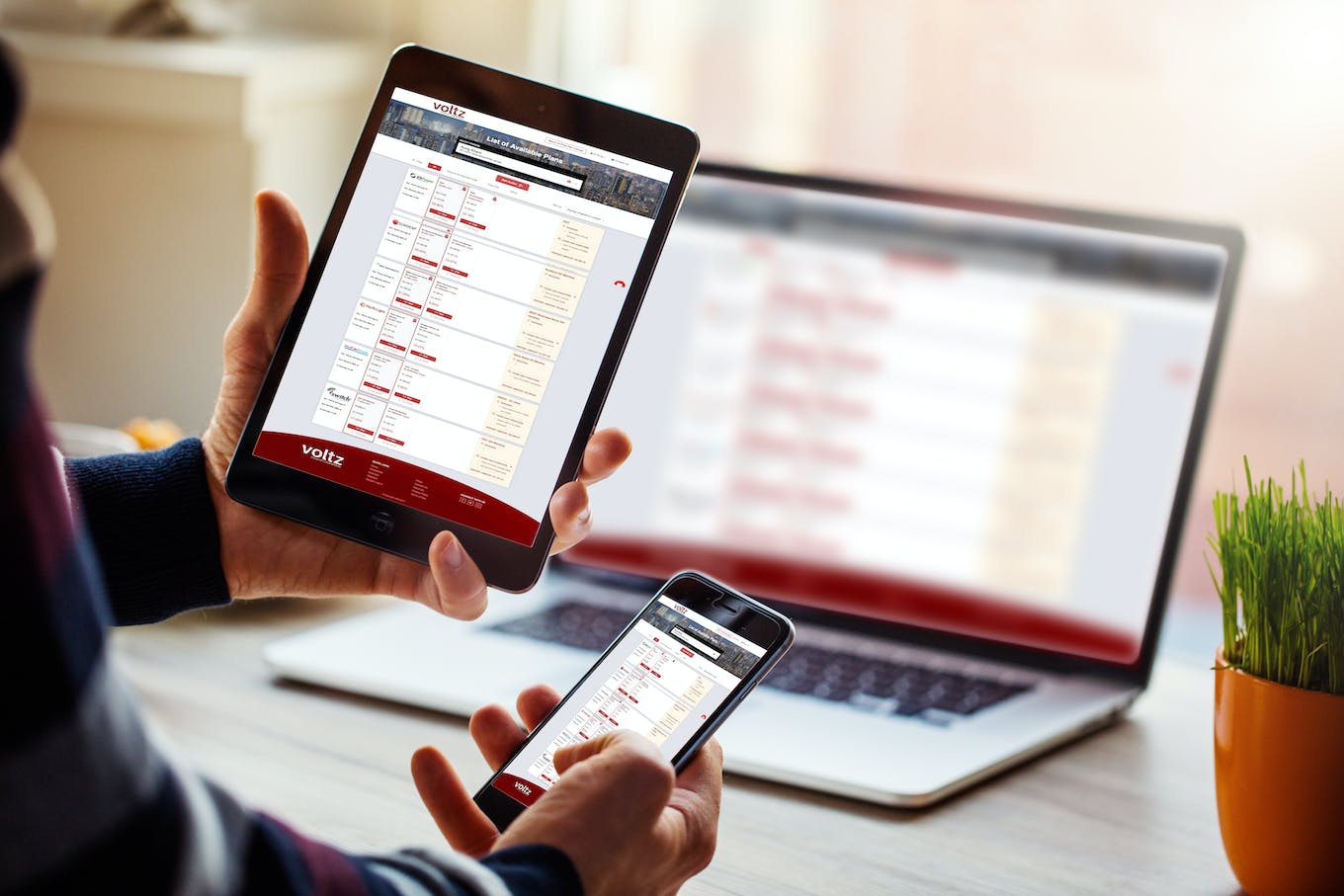 Voltz allows consumers to compare price plans, promotions and deals from various electricity retailers, in order to choose the one best suited to their preferences. Image: Voltz

What makes Voltz unique is its auction feature. When using Voltz, consumers can initiate an auction, and retailers can bid for their business in real time. This benefits consumers as competition between the retailers can lower the price points even further.

“Competition is the best negotiator,” says Maratheyah. “Compared to a standard comparison of price plans where what you see is what you get—take it or leave it—the auction feature allows retailers to compete and offer a better price than they originally published on the site.”

The digital platform is the first in Singapore to offer real time electricity price searches, comparisons and transactions. The consumer is able to interact directly with the retailer and vice versa, eliminating the need for a virtual salesman and ensuring electricity price transparency.

Voltz cuts out all the jargon and intermediaries, providing a non-arbitrated transparent platform for consumers to communicate and transact seamlessly with retailers, he says.

Not only is Voltz handy for consumers, but it benefits retailers as well. With Voltz’ dynamic plan builder—a business intelligence tool—retailers are able to observe, gather and analyse real time data on consumer behaviour through the auction feature, providing them with the flexibility to adjust their price plans on the fly. Over time as more residents auction their business, retailers can tailor their electricity prices to better suit consumers’ preferences, removing the need for retailers to use resources gathering information on consumer behaviour and market trends.

Making the leap to greener pastures

But the entry of green electricity retailers does not guarantee adoption. A month after the start of the pilot phase in April, sign-up rates showed that consumers still seemed to favour fossil fuel-generated electricity—retailers like PacificLight Energy, Tuas Power Supply and Best Electricity Supply attracted 1,000 sign-ups or more, while solar energy retailer Sunseap described their sign-ups as “three-digit figures”.

Awareness is the key. There’s a growing push in society for businesses and consumers to reduce their carbon footprint and it’s in the consumers’ interest to have a sustainable energy option.

While cost is likely to be the first factor consumers take into account, “smarter consumers” may choose the most sustainable option. “The quality of the product, the electricity itself, is the same regardless of which retailer you choose,” says Sivakumar Avadiar, co-founder and director of green electricity retailer ES Power. “What will differentiate retailers is the value add, such as green electricity, promotions and customer service.”

Less than 10 per cent of 500 consumers surveyed were willing to pay more for green electricity, according to a survey by ES Power.

Evidently, the appetite to go green does seem to exist among Singaporeans. With the recent buzz over single-use plastic reduction and the opening of zero-waste grocery stores locally, environmental consciousness is growing in Singapore.

“Awareness is the key. There’s a growing push in society for businesses and consumers to reduce their carbon footprint and it’s in the consumers’ interest to have a sustainable energy option,” says Maratheyah.

Although price may be the deciding factor for most consumers, a transparent comparison platform like Voltz can increase consumers’ awareness of greener options—the availability of other more sustainable plans and retailers—Maratheyah says.

“There’s potential in the small but growing segment of consumers that value the transparency and accountability of green electricity retailers [through the issuance of Renewable Energy Certificates],” said Geraldine Tan, general manager of electricity retailer PacificLight Energy. “Coupled with affordable price points, green electricity is proving increasingly attractive to consumers.” Platforms such as Voltz can amplify and spread awareness of this transparency, contributing to the growing eco-consciousness of Singaporeans and empowering them to make more sustainable choices.

“It’s up to consumers whether or not they exercise that choice,” says the director of another green electricity retailer. “On a $100 bill for a typical three or four-room flat, green electricity will cost about a dollar more each month. So would you consider a greener product for the difference of a dollar?”