Southeast Asia's economy could grow by US$12.5 trillion by 2070 if the fossil fuel-dependent region decarbonises

If one of the world's most climate-vulnerable regions rapidly reduces emissions over the next 50 years, its economy could grow by 3.5 per cent a year. If it doesn't decarbonise, its economy could be $28 trillion smaller by 2070, according to a new study by Deloitte.

Southeast Asia could reap massive economic rewards in the coming decades if the region takes immediate action to lower carbon emissions and stymie global warming, according to a new study by Deloitte, a professional services firm.

If the fast-growing regional bloc of 650 million people changed course from the carbon-intensive trajectory it is currently on, and makes the necessary policy shifts to achieve net-zero greenhouse gas emissions by 2050, the 10-nation region would not only avoid the worst impacts of climate change, but could make US$12.5 trillion in economic gains by 2070, the report titled Southeast Asia’s turning point finds.

Although a low-carbon transition will involve short-term structural adjustment costs, the economic gains will be almost immediate and outweigh the costs, the report predicts. The cumulative cost of transition for Southeast Asia’s power sector alone is US$350 billion between 2025 and 2030, according to International Energy Agency analysis. Industries including manufacturing, retail, tourism, manufacturing, construction, transport, agriculture, water and utilities could see rapid economic gains from the first year after bold policy decisions push for greater decarbonisation, Deloitte predicts.

A transition to cleaner economies will rely heavily on systemic shifts in Southeast Asia’s energy, industry and transport sectors. Fossil fuels’ share in the energy mix would need to drop from around 95 per cent currently to 20 per cent by 2050, with renewables, primarily solar and wind, becoming the region’s bedrock energy sources. 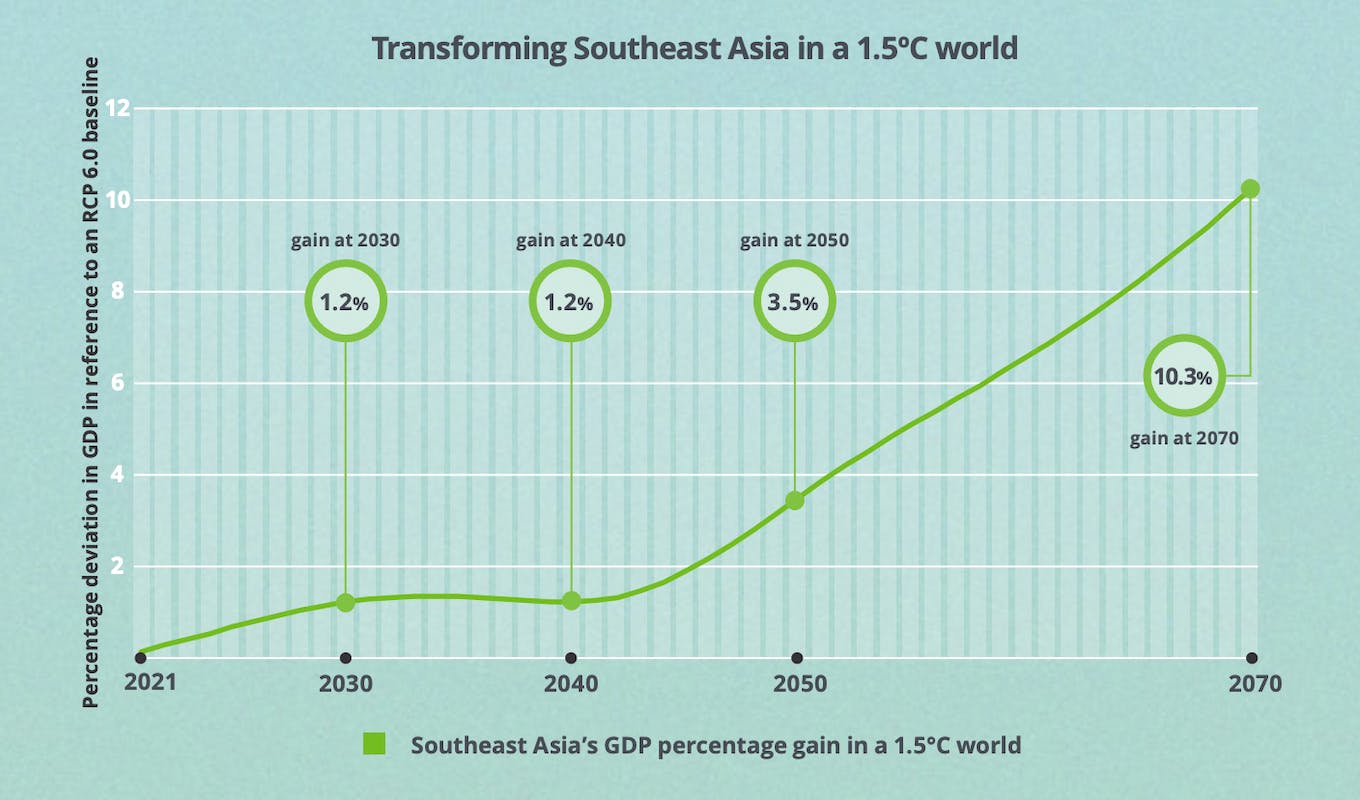 Deloitte’s model factors in the physical impacts of climate change into its economic growth forecast, and finds that climate inaction, which would see the planet warm by 3ºC by 2070, could cost Southeast Asia’s economy US$28 trillion, or 16 per cent of GDP, over the next 50 years.

As global temperatures rise, the region will be hit by severe weather extremes such as heat waves, drought, and heavier and more frequent bouts of rain that will hamper economic activity. A recent report by Intergovernmental Panel on Climate Change, has highlighted Southeast Asia as one of the most vulnerable regions to climate change.

Unchecked climate change will reduce Southeast Asia’s economic growth by 7.5 per cent a year through to 2070, according to Deloitte’s research. This scale of economic loss is equivalent to the financial impact of the 2018 Lombok earthquake, which cost Indonesia’s economy US$352 billion, hitting every nine months from now until 2070. 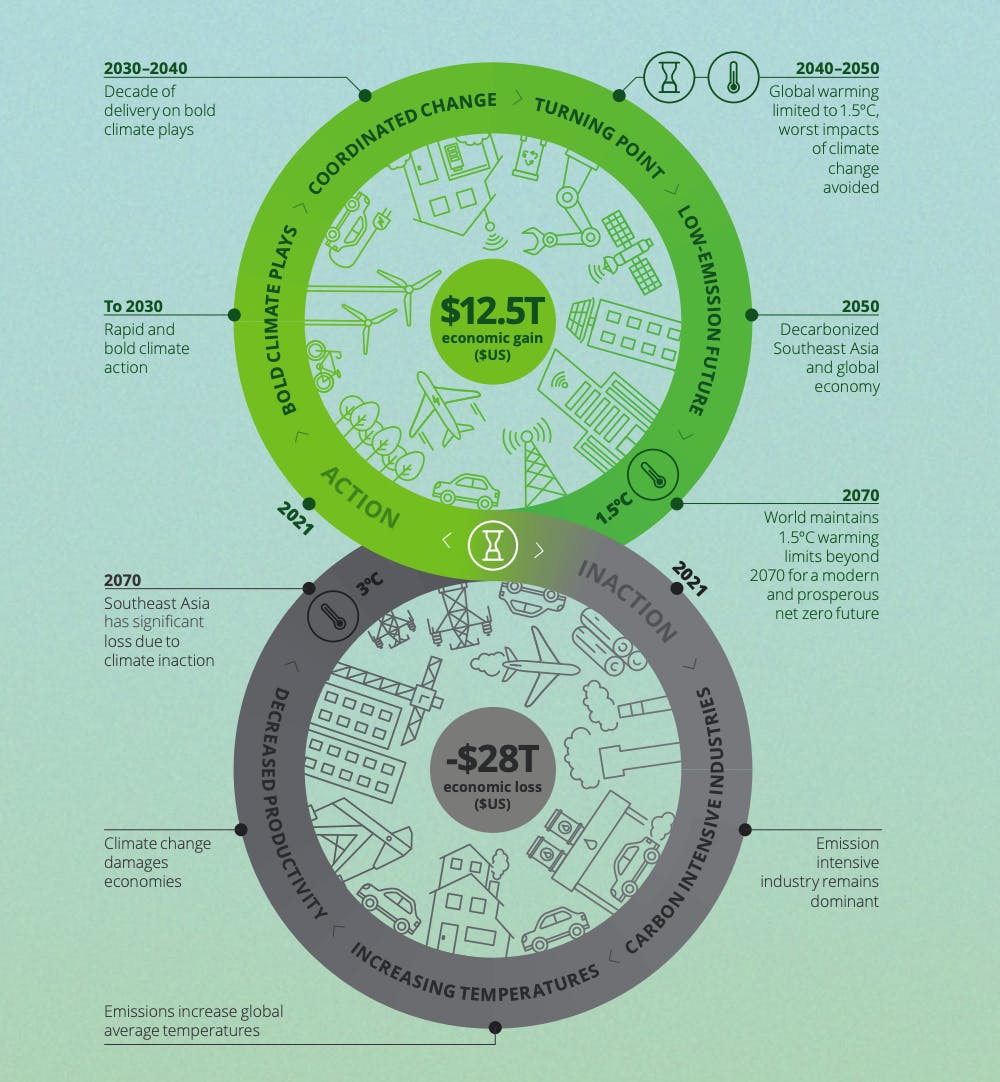 The economic consequences of climate action to limit global warming to 1.5ºC above pre-industrial levels, and a 3ºC warming ‘business-as-usual scenario. Source: Deloitte

Despite dire consequences projected for climate inaction, Southeast Asian nations are among the world’s slowest to respond to the climate emergency. A recent study titled The ASEAN climate and energy paradox highlighted the region’s “modest” carbon-reduction commitments made under the Paris Agreement, low proportion of renewables in the energy mix, and uninspiring target for raising the share of renewables; Southeast Asia is aiming to generate 23 per cent of its energy from renewables by 2025, but is not on track to hit that target.

The study also pointed out that Southeast Asia is quick to clear vast areas of forest, continues to heavily subsidise fossil fuels and is building new coal-fired power plants as quickly as anywhere in the world. Southeast Asia’s emissions from power generation could more than double by 2040, and industrial emissions could grow by 75 per cent, according to a recent energy outlook study.

Speaking at an event held by think tank Asean Centre for Energy last week, experts and officials from Indonesia, the Philippines and Malaysia backed the potential of carbon capture, use and storage (CCUS) technology to help reduce emissions of carbon-intensive industries that are powering much of Southeast Asia’s economic output. CCUS technologies enable highly-polluting industries to continue to function by capturing carbon dioxide before it is pumped into the atmosphere.