The research, published in Nature Energy, measures the full lifecycle greenhouse gas emissions of a range of sources of electricity out to 2050.

It shows that the carbon footprint of solar, wind and nuclear power are many times lower than coal or gas with carbon capture and storage (CCS).

This remains true after accounting for emissions during manufacture, construction and fuel supply.

“There was a concern that it is a lot harder than suggested by energy scenario models to achieve climate targets, because of the energy required to produce wind turbines and solar panels and associated emissions,” explains project leader Dr Gunnar Luderer, who is an energy system analyst at the Potsdam Institute for Climate Impacts Research (PIK).

Luderer tells Carbon Brief: “The most important finding [of our research] was that the expansion of wind and solar power…comes with life-cycle emissions that are much smaller than the remaining emissions from existing fossil power plants, before they can finally be decommissioned.”

Critics sometimes argue that nuclear, wind or solar power have a hidden carbon footprint, due to their manufacture and construction.

This large “carbon debt”, and the related debt of energy, must be paid off if they are to cut emissions over their lifetime.

Wind turbines and nuclear plants need a lot of steel and concrete. And the centrifuges that separate nuclear fuel also rack up a big electricity bill.

Yet zero-carbon sources of electricity are not the only ones to have a hidden, indirect carbon and energy footprint.

For coal and gas, these lifecycle energy uses and emissions come from extraction machinery and fuel transport. Significantly, they also come from methane leaks at pipelines, well heads or coal mines.

These lifecycle emissions continue, even if coal or gas plants add CCS, which also may not capture 100% of emissions at the power plant.

What’s more, the indirect energy uses and emissions of each technology will shift over time, due to changing fuel sources, advances in manufacturing and the evolution of global electricity supplies.

The new research, from lead author Michaja Pehl and colleagues, comprehensively measures the lifecycle energy use and greenhouse gas emissions of different sources of electricity, between now and 2050.

It then compares these hidden footprints in a world that cuts emissions in line with a 2C climate goal and a world that stops further climate action.

The first stage of the work is to add up the energy needed to build power stations and to provide them with the fuel and other inputs they need to run.

This is called “embodied energy use”. It is the inverse of “energy return on investment” (EROI).

The study finds that electricity from fossil fuels, hydro and bioenergy has “significantly higher” embodied energy, compared to nuclear, wind and solar power.

For example, the study finds that 11 per cent of the energy generated by a coal-fired power station is offset by energy needed to build the plant and supply the fuel, as the chart below shows.

This is equivalent to saying that one unit of energy invested in coal power yields nine units of electricity.

Nuclear power is twice as good as coal, with the energy embedded in the power plant and fuel offsetting 5% of its output, equivalent to an EROI of 20:1. Wind and solar perform even better, at 2 per cent and 4 per cent respectively, equivalent to EROIs of 44:1 and 26:1. 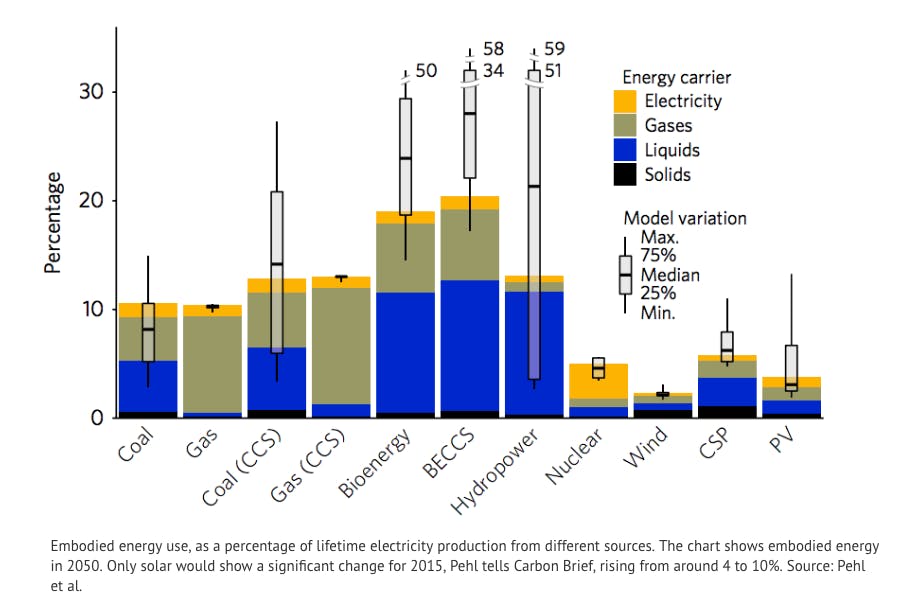 “I continue to be amazed just how low the embodied energy use of solar, wind and nuclear power is, in comparison with others,” study co-author Edgar Hertwich tells Carbon Brief.

Hertwich is professor of industrial sustainability at the Yale School of Forestry and Environmental Studies. He also put together the lifecycle electricity generation emissions data in the latest Intergovernmental Panel on Climate Change report, AR5.

In contrast to today’s research, this study said nuclear and fossil-fired power stations had much better EROIs than renewable sources.

The study was subject of a rebuttal that said the authors’ had made “serious methodological errors…[which] invalidate their work.”

This GWPF work was later reported by Financial Times city editor Jonathan Ford, in an article that also repeated a GWPF talking point on the steel use of wind turbines compared to gas plants.

In a separate study, published in 2013, Prof Hertwich and colleagues took a wider look at the natural resources needed to generate power from wind, solar, gas and other fuels.

This found that renewable electricity reduces all forms of pollution, with this benefit trading off against the need for larger quantities of a range of raw materials, from iron to copper and cement.

These requirements “appear manageable but not negligible compared with the current production rates for these materials,” the paper concluded.

For example, the iron produced globally in one year would be enough to build all the low-carbon electricity capacity needed by 2050.

Today’s research uses the embedded energy numbers to work out the lifecycle greenhouse gas emissions of different sources of electricity.

It finds that the footprint of nuclear, wind and solar are much lower than coal and gas with CCS, as well as hydro or bioenergy, as the chart below shows. 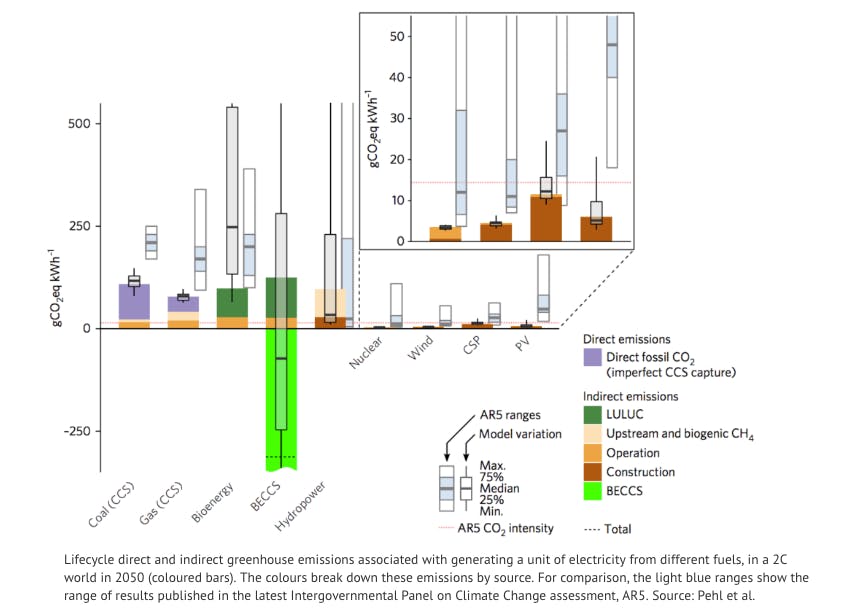 Note that this chart shows figures for a 2C world in 2050, when global electricity supplies have been largely decarbonised.

This shift cuts the impact of indirect emissions due to electricity use, for example at a solar cell factory or nuclear fuel site.

The chart also accounts for technological progress, which is particularly significant for solar as manufacturing processes get more efficient.

This explains why many of the footprints are lower than the corresponding values from the IPCC’s AR5, which did not account for changes over time.

“A crucial strength of our approach is that it fully accounts for future changes in the energy system. For example, increasingly less energy will be required to produce solar modules, due to technological progress and a shift towards less energy-intensive technology variants. At the same time, the global climate change mitigation effort will reduce the CO2 emissions per unit of electricity and steel inputs, further limiting life-cycle greenhouse gas emissions. The earlier studies considered by the IPCC did not account for these future changes, thus overestimating indirect energy requirements and indirect greenhouse gas emissions of several low-carbon technologies.”

The study finds each kilowatt hour of electricity generated over the lifetime of a nuclear plant has an emissions footprint of 4 grammes of CO2 equivalent (gCO2e/kWh).

The footprint of solar comes in at 6gCO2e/kWh and wind is also 4gCO2e/kWh.

The figures for CCS are elevated for two reasons. First, upstream emissions during mining of coal or extraction of gas continue.

Second, the study assumes that CCS only captures 90% of power plant CO2.

Higher capture rates are more costly and would not eliminate upstream emissions, equivalent to 23-42gCO2e/kWh, still well above the numbers for nuclear, wind or solar.

The footprint for hydro is highly variable, the paper notes, with lifecycle emissions largely due to the rotting organic matter flooded by the dam.

This means certain sites should be avoided, in particular shallow dams in warm regions, with large variations in water level.

For bioenergy, the footprint is also highly uncertain and variable, the paper says, depending on how the biomass is sourced and if it involves converting high carbon stock land such as forests.

The findings enhance the case for nuclear, wind and solar, at the expense of bioenergy, hydro and CCS.

“There is no such thing as truly clean coal,” Luderer says in a statement, making it “increasingly implausible” it can play a role in a climate-friendly future, even with CCS.

“There is no panacea to the energy transition. Coal and gas with CCS will perhaps play a role in certain regions that don’t have ready access wind and solar. But their share in the overall power mix will be much smaller than that of the renewables.”

Note that the global average figures in the chart, above, hide wide geographical variation for some power sources, particularly hydro and solar.

Even at this top end, however, solar’s footprint is very low compared to other sources.

Contrary to the claims of some critics, today’s research shows that the hidden emissions due to building wind turbines, solar panels or nuclear plants are very low, in comparison with the savings from avoiding fossil fuels.

“Some critics have argued renewable energies could come with high hidden greenhouse gas emissions that would negate their benefits to the climate. Our study now shows that the opposite is true,” Luderer says in a statement.

In fact, the indirect lifecycle emissions in a 2C pathway are much lower than in a world without climate policy, where methane leaks during coal and gas extraction are significant.

“The indirect greenhouse gas emissions induced by upscaling wind, solar and nuclear power are small compared with other emissions sources, and thus do not impede the transformation towards climate-friendly power supply.”

While small, these indirect emissions become comparatively significant over time, as direct emissions from power plant chimneys fall towards zero. Hertwich tells Carbon Brief: “If you want to get to zero [emissions], this is part of the challenge you need to overcome.”