The Singaporean obsession with food is a good place to start education on why food waste is such a scandal, says international food waste fighter Tristram Stuart. Eco-Business asks him how businesses can take action on food waste prevention.

Singapore’s love for good eats has given rise to a world-renowned culinary culture, but the city-state can also harness its love for food to win the battle against food waste, says international food waste campaigner Tristram Stuart.

A prolific author, campaigner and National Geographic Emerging Explorer, Stuart will share his experiences and thoughts about food waste this Sunday at Marina Bay Sands at the Nat Geo Live: Celebrating the End of Food Waste event, organised in partnership with Nanyang Technological University and the National Environment Agency.

In Singapore for the first time, he says that Singaporeans’ deep devotion to food is “highly valued” and a great place to start to counter food waste. “That’s where I would build on the anti-food waste movement; just recognising that if you celebrate and value food, the most logical thing is to eat it without throwing it away,” Stuart, 40, tells Eco-Business.

The activist is best known for high-profile events such as Feed the 5000, where surplus food that would have been thrown away is cooked and distributed in multiple cities around the world, as well as his London-based organisation, Feedback. The Briton is also the United Nations’ champion for Sustainable Development Goal 12, particularly the target that aims for a 50 per cent reduction in food waste by 2030.

In this interview with Eco-Business, Stuart explains the role supermarkets play in creating food waste, what we should do instead of doubling food production to feed a growing global population, and what Europe and North America can learn from Asia.

You’ll be speaking at Nat Geo Live: Celebrating the End of Food Waste on Sunday. Isn’t it premature to be celebrating that?

What I’m pointing to is that we’re not going to win the battle by preaching, finger wagging and making people feel bad, but by being inspiring and engaging so that people want to be part of the anti-food waste movement.

That’s the main focus of Feedback, the organisation I founded, which arranges massive parties like Feeding the 5000, where people come and enjoy food and have a bit of a dance. My most recent project, Toast Ale, makes prize-winning craft ale out of fresh surplus bread that would otherwise be wasted—that’s a party in a bottle.

The name of the event is a message to say actually, a solution to the problem of global food waste can be delicious, nutritious, and fun. It’s all about the enjoyment of what we have, not the going without.

If you celebrate and value food, the most logical thing is to eat it without throwing it away.

Although a lot of your work seems aimed at consumers, you’ve mentioned that you met with Singapore-based food services and businesses this week. How do you work with businesses on food waste?

To get a business to take food waste seriously, you need to give them an incentive, in terms of its bottom line or reputation. That’s what my business is.

I’ve done that by helping catalyse a global grassroots movement against food waste, which not only drives behaviour change among the public to waste less food, but also creates the expectation that businesses will follow suit.

When food waste inspires big public events and high-profile campaigns, engages food celebrities, remains in the public sphere and headlines for months at a time, that’s when food businesses call you up and ask for help.

Then we go in to meet them and give them what we call “insultancy” — robust, constructive consultation where we challenge them to go further in tackling food waste.

In those conversations with food businesses, what did they identify as their biggest challenges?

I can’t resist touching on the issue of buffet culture in Singapore. At the end of the day, there are trays and trays of untouched food and the food service staff look at them and think, ‘What on earth am I supposed to do?’ There was some really honest and frank sharing from the hotels and food service industry about that problem.

But once you start probing, you can come up with really practical solutions. I understand that not so long ago in Singapore, it was normal to doggybag leftover food from the buffet and everyone got a free meal for the next day as well. This is just one example of many possible solutions to the problem.

It is scandalous that in a city that has charities that are happy to come and collect this food and feed hungry people with it, or customers who’d be happy to purchase slightly misshapen but otherwise consumable food for a small discount, that supermarkets would choose to dump that in the trash.

What I like about that solution is that it goes to the heart of Singapore’s foodie culture. One can see how the anti-food waste movement can take root in what is already in a highly valued artefact, the idea that food is hugely valuable. That’s where I would build on the anti-food waste movement; just recognising that if you celebrate and value food, the most logical thing is to eat it without throwing it away.

Which industries have the most potential to take action against food waste?

The greatest benefits can be achieved through the least effort in supermarkets. In rich countries, supermarkets have come to dominate food retail, and in this country FairPrice controls more than half of the grocery retail market.

This means supermarkets have colossal power not just to reduce food waste in their own stores but also to influence consumers. More importantly, they can adjust their policies to tackle food waste in their supply chains, such that farmers and manufacturers stop overproducing or throwing away perfectly edible but slightly misshapen produce.

For example I got a bag of edible yellow peppers out of one of FairPrice’s dumpsters. It is scandalous that in a city that has charities that are happy to come and collect this food and feed hungry people with it, or customers who’d be happy to purchase slightly misshapen but otherwise consumable food for a small discount, that supermarkets would choose to dump that in the trash.

But on the other hand, if the data I received from FaiPrice is accurate, it has achieved an astonishingly rapid and dramatic reduction in food waste, halving food waste between 2014 and 2016. It’s a beacon to the world. It would be great to understand how FairPrice arrived at those numbers in more granular detail, but suffice it to say that FaiPrice is doing a lot. 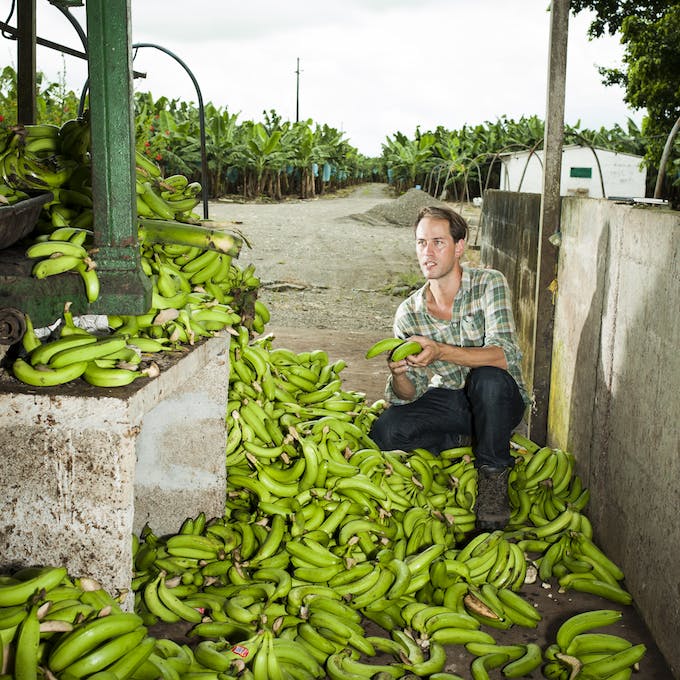 What you see as the next big trend or idea in dealing with food waste?

We’re being told by the likes of [agribusinesses] Cargill and Monsanto that we need to double food production by 2050. That is wrong because the biggest threat to global food security in the long term is that by doing that, we will render the world uninhabitable for most other species and ultimately, ourselves.

What we need to do instead is to protect the natural environment from the bulldozers of  those who are saying we need to double food production, and that is a massive challenge. That is the next step.

Do you have any final thoughts on the food waste situation in Asia?

I always like coming to a new part of the world—I’ve never been to Singapore before—to learn as much as I can to preach against food waste. There are many inspiring things here in Singapore and one of them, which might sound a little bit odd, is eating offal.

In the UK and US, offal consumption has halved in the last 30 years, but Singapore and Asia have hung on to that tradition and celebrated it. There are many really delicious, nutritious dishes using every part of the animal, and that’s something we could learn in Europe and North America.

This interview has been edited for length and clarity.