A taskforce of industry leaders assembled to revitalise the Singapore economy after the Covid-19 downturn has been criticised in parliament and by civic society groups for excluding voices they say could set the city-state on a more sustainable, inclusive developmental path.

The Emerging Stronger Taskforce, announced by the Ministry of Trade and Industry in May, has been put together to assess the impact of the Covid-19 outbreak on the economy, identify opportunities and threats, and devise ways to “refresh, reimagine or reset” the country’s economic development strategies as pandemic restrictions on business activity begin to ease. 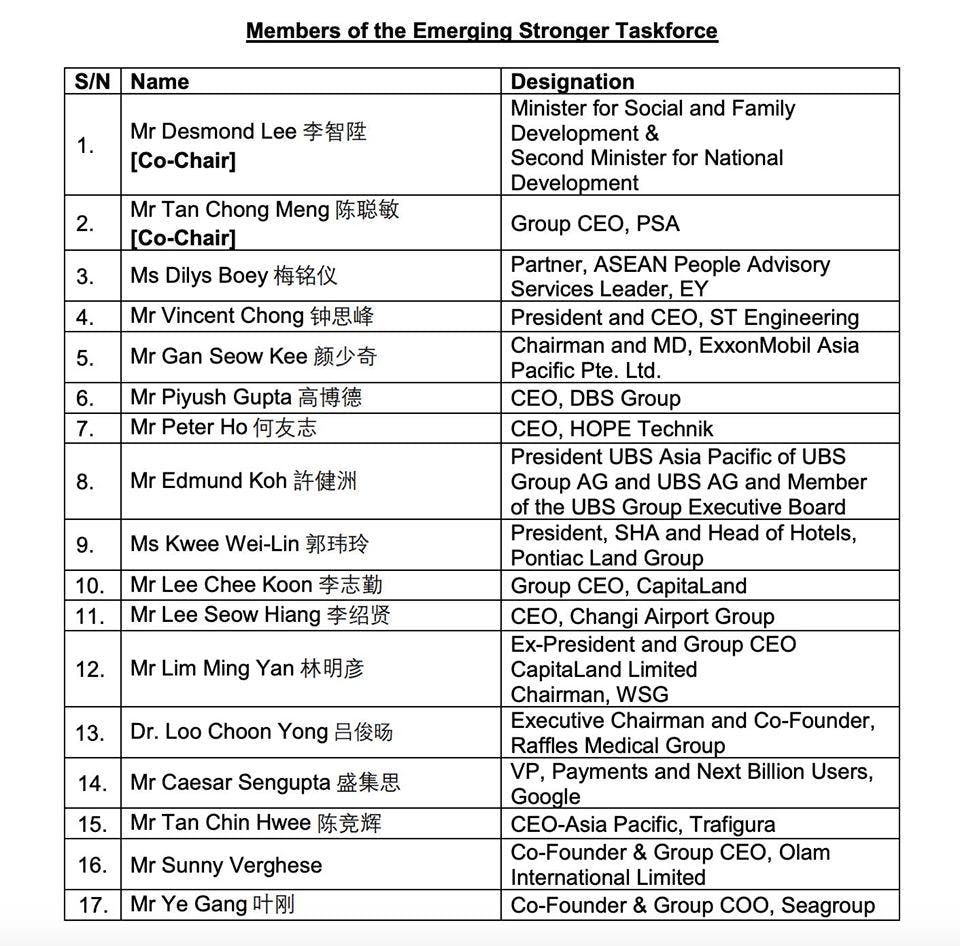 Members of the Emerging Strongers Taskforce. Image: Ministry of Trade and Industry

The taskforce is co-chaired by Desmond Lee, Minister for Social and Family Development and Second Minister for National Development, and Tan Chong Meng, group chief executive of port operator PSA.

Recommendations made by the taskforce will be implemented by the Future Economy Council, a collective of business, trade associations and the government, chaired by Deputy Prime Minister and Minister for Finance, Heng Swee Keat.

Speaking to parliament this week, Anthea Ong, a nominated member of parliament, welcomed the aim of the taskforce—to rethink the post-Covid economy—but said that members of the taskforce “represented industries that we have traditionally treated as pillars of our current economic structure”, and entities committed to a sustainable future were not represented.

“If we want a flexible and responsive society that is able to absorb shocks and rebound from them, I believe we must recalibrate current power structures for a fairer economy that considers key stakeholders in our economic system equally,” she said.

Ong called for a more diverse, inclusive approach to formulating strategies for economic recovery, pointing out that while lessons learned from dealing with the 2003 Sars outbreak had kept Covid-19 infections among healthcare workers to a minimum, “systemic gaps” in worker welfare had left the country’s marginalised migrant workers exposed.

She proposed that changes be made to the taskforce and said a plan to consult a range of stakeholders, including smaller businesses and citizens, should be formalised. “I believe that if we sideline these views now, we are sabotaging our own futures, and those of our children’s,” said Ong.

She also noted a lack of female representation. The only two women on the taskforce of 17 people are Kwee Wei-Lin, head of hotels at luxury real estate developer, Pontiac Land, and Dilys Boey, partner at professional services firm EY.

The deputy prime minister responded by saying that the taskforce would “consult multiple stakeholders and draw on insights beyond its membership, so that their findings and recommendations are relevant”.

If we sideline these views now, we are sabotaging our own futures, and those of our children’s.

Xinying Tok, a representative of climate action group Climate Conversations, said that the diversity of the taskforce is intrinsically linked to sustainability. “Resilience around climate breakdown can only be built on the existing foundations of resilience in our society,” she said.

“Through Covid-19, we have seen clearly that grassroots and civil society organisations enhance our social resilience. Having the right mix of voices as part of the reimagining of our economy, is an important ingredient in ensuring the lessons of social resilience from Covid-19 are integrated into future planning.”

Karen Sim, senior strategist for sustainability non-profit Forum for the Future, said that new thinking was needed to turn the disruption of Covid-19 “into an opportunity for Singapore to build back better in the long term.” 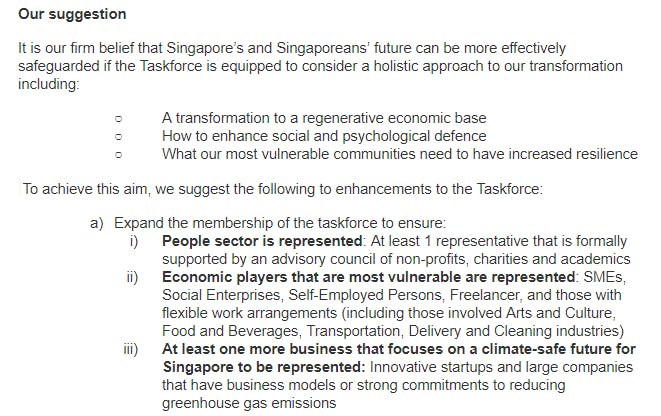 An open letter from a large group of civic society groups and businesses including SG Climate Rally, People’s Movement to Stop Haze, Foodscape Collective, TWC2 and AWARE, sent to ministers on Monday, suggested that the taskforce should include an NGO, a small-to-medium sized business, and a company that has “strong commitments” to reduce carbon emissions.

The letter stressed the need for greater social resilience by including those hardest hit by the pandemic in discussions about the economic future of Singapore, and to transition to a regenerative, not extractive economic base to safeguard Singapore’s future.

Responding to questions from Eco-Business, the Ministry of Trade and Industry said it had received “well-intended suggestions” from individuals and groups for a more diverse representation, and would be “working closely” with the FEC and its sub-committees, which are represented by “different sectors, business segments, and stakeholders.”

“The EST will consult multiple stakeholders in the course of its work. The taskforce will draw on insights beyond its membership, to discuss issues and to spearhead action,” an MTI spokesperson said.

Ong told parliament that sustainable business models would be key to “building a better and safer future” for Singapore, citing a McKinsey report that found that investments in climate-resilient infrastructure created jobs and boosted the resilience of both the environment and the economy.

She pointed to the German parliament’s push for a climate-conscious post-Covid economic stimulus plan, and said that companies with large carbon footprints should only receive government aid on the condition that they cut emissions to help Singapore accelerate towards its Paris Agreement commitments.

“As countries grapple with what a green and healthy recovery looks like, measurement and accountability may be instrumental for change,” she said, adding that the Task Force on Climate-Related Financial Disclosures—a global framework created in 2015 for companies to report the risks they face from climate change—should be “the norm”.

Singapore’s newly projected peak emissions of 65 million tonnes CO2-equivalent by 2030 is a 24 per cent increase over the amount emitted in 2017. The country’s climate policies have been rated as “highly insufficient” by Climate Action Tracker, a research group that tracks climate action progress worldwide.