About 2,000 people came out in support of bolder targets to reduce the rich city-state's carbon emissions, a higher carbon tax on polluting industries and a comprehensive study into the threats that climate change poses to Singapore.

Nearly 2,000 people showed up at Singapore’s Speakers’ Corner on Saturday to call for greater government action on climate change, braving the heat, humidity and air pollution from burning forests in neighbouring Indonesia to demand a more ambitious approach to tackling a problem that threatens the long-term prosperity of the island state.

With the roar of Formula One cars warming up for the Singapore Grand Prix in the background, speakers at SG Climate Rally challenged the government to slash carbon emissions, and declare a state of national climate emergency—a call to action that informed the protesters’ clothing colour: red.

At the rally, the speakers, which included an 11 year-old school boy, called out Singapore’s Paris Agreement carbon emissions target—to reduce its carbon intensity by 36 per cent from 2005 levels by 2030, and reach peak emissions by 2030—as insufficient.

Singapore’s climate policies have been rated as “highly insufficient” by Climate Action Tracker, a research group that tracks countries’ progress on climate action.

The organisers called on Singapore’s absolute emissions to peak by 2020, to be halved by 2030 and reach net zero by 2050. 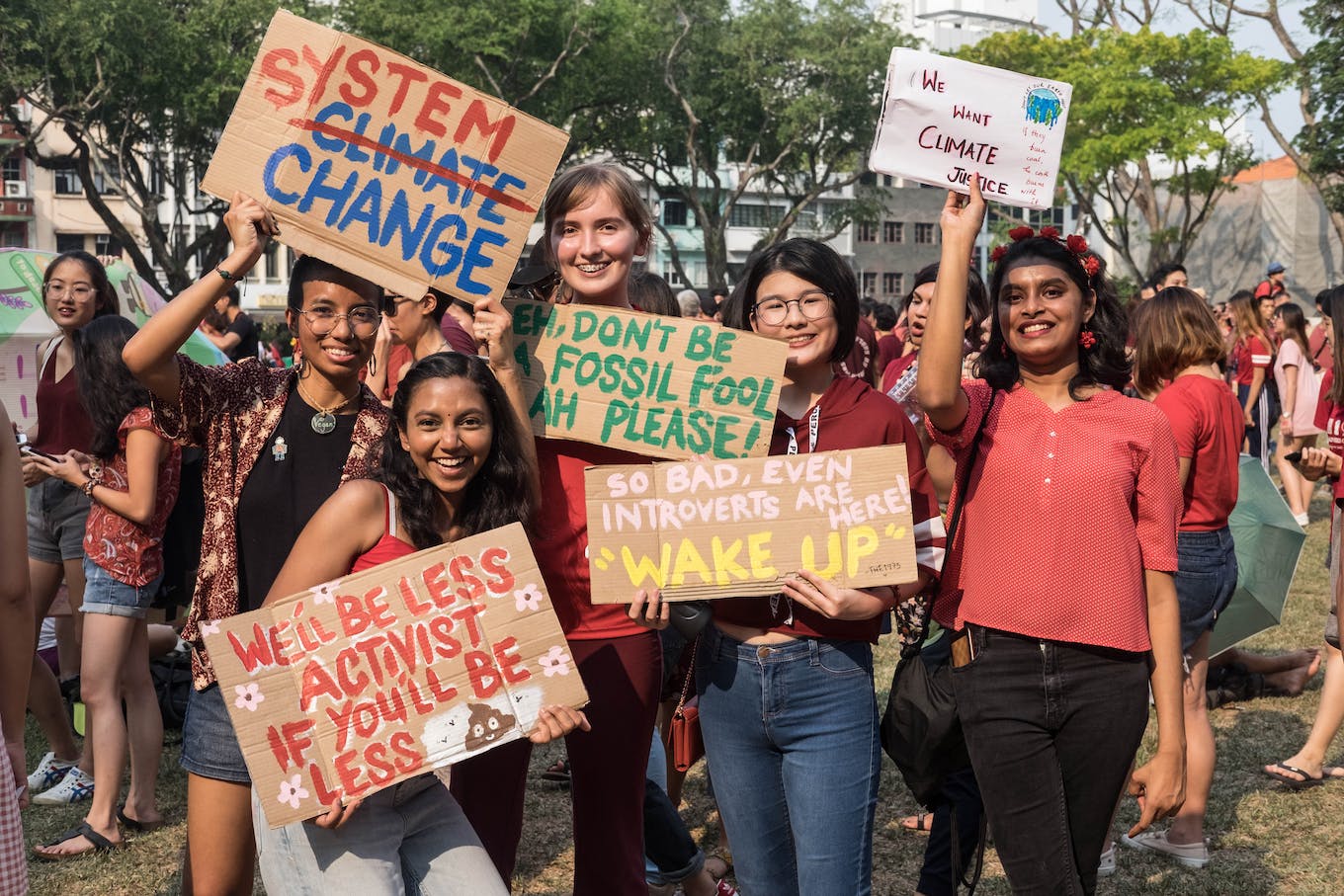 The organisers also called on the government to assess the direct and indirect impact posed to Singapore by the climate crisis by next year, to divest from polluting businesses, and to engage with Singaporeans on the severity of the climate crisis.

Speakers pointed out that the official narrative around Singapore’s climate impact—that it is too small to worry about making major reductions, as it contributes to just 0.11 per cent of global emissions—masks the impact of the country’s carbon-intensive petrochemicals industry, the backbone of Singapore’s economy. Instead, officials focus on what individuals should do to reduce their carbon footprint, speakers said.

“You ask us to turn off our lights. But the lights at Jurong Island never go off,” said Ho Xiang Tian, 23 year-old co-founder of environmental group LepakinSG, referring to the man-made island that houses Singapore’s petrochemicals businesses and is home to Exxon Mobil’s largest oil refinery. 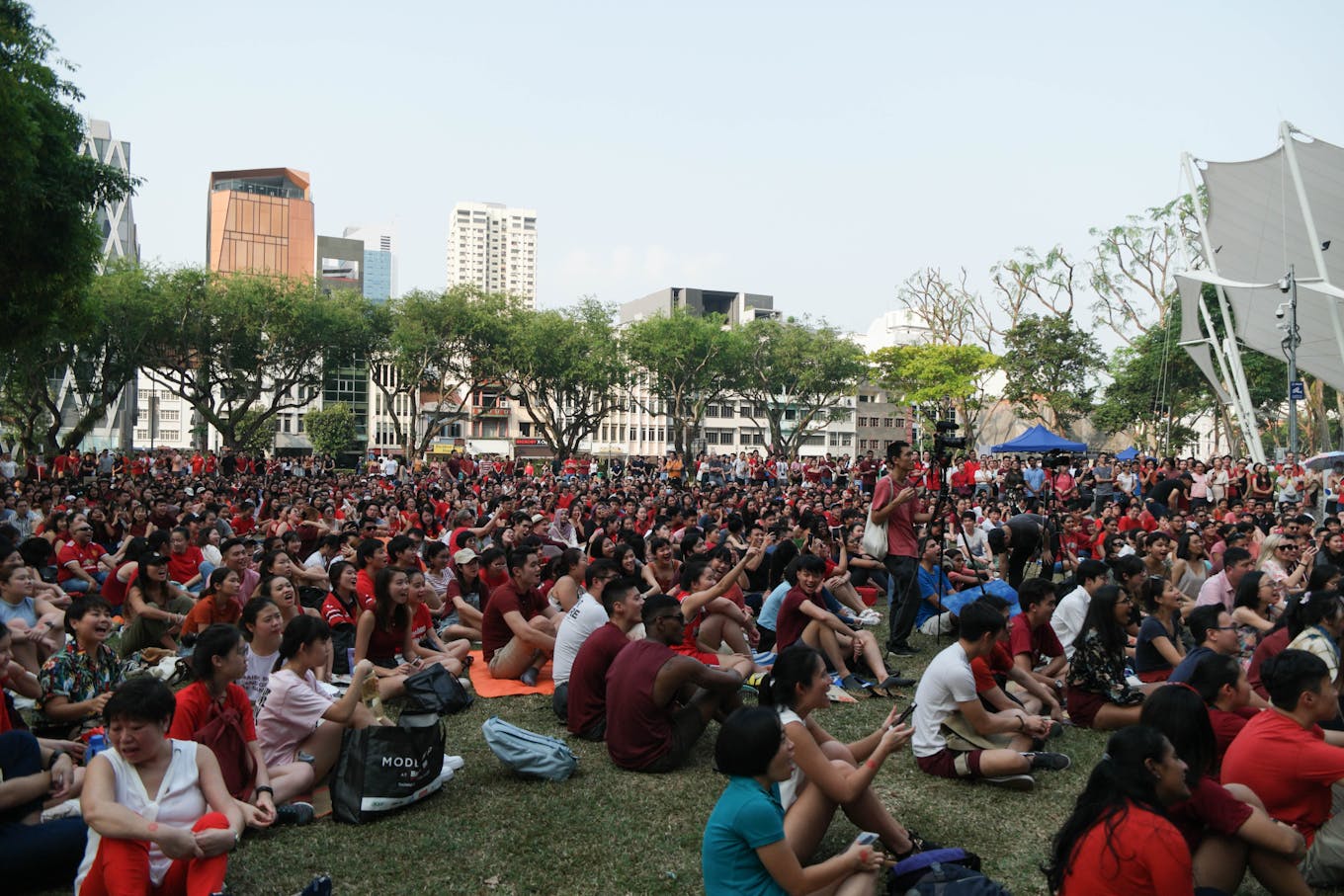 A mostly young crowd listens to speeches at SG Climate Rally, the first of its kind in Singapore. Image: Zafirah Zein, Eco-Business

Speaking to journalists on the sidelines of the event, Komal Lad, co-organiser and initiator of the rally, said she hoped the government would “take our calls to action seriously.”

She said Singapore’s carbon tax, the first of its kind in Southeast Asia that was introduced this year, “is not enough to put a dent in emissions” and pressure major polluters to reduce their impact.

The tax should be increased from S$5 a tonne of carbon to S$100 a tonne to help decarbonise Singapore’s fossil fuels-based economy, Lad said. 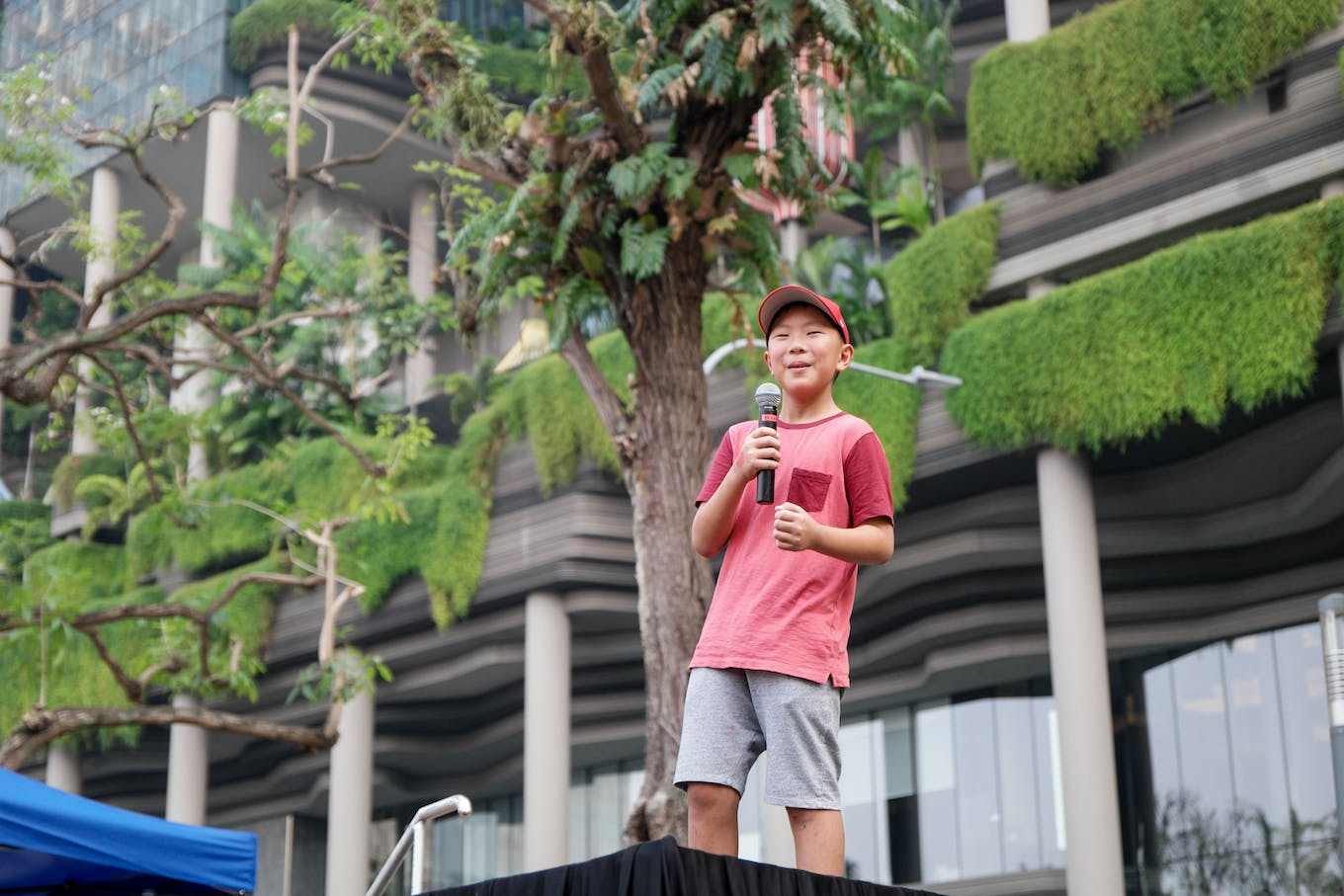 11 year-old school boy Oliver Chua was among the rally’s speakers. “Let’s teach our parents a lesson for once,” he said. 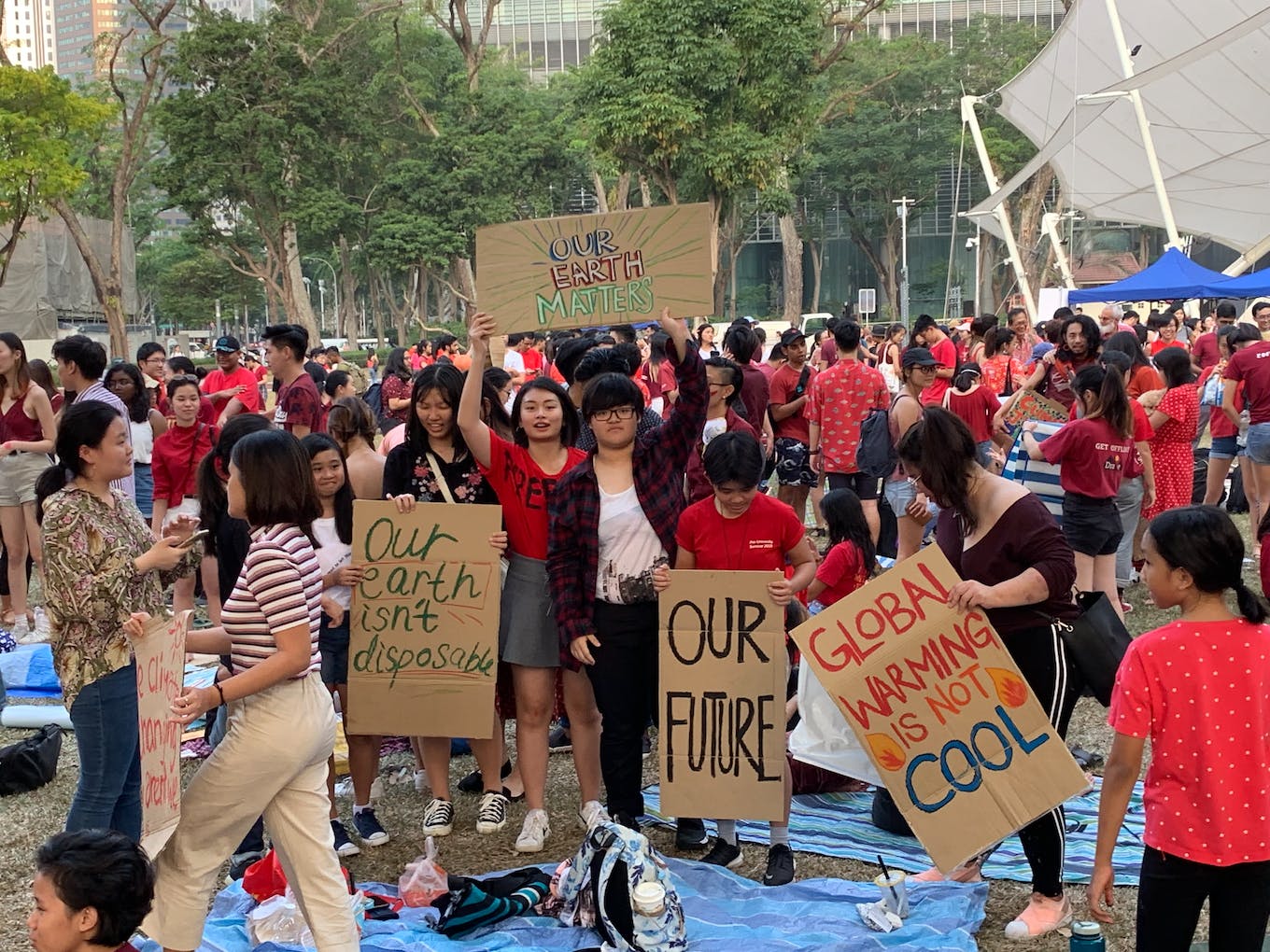 The event was held the day after the beginning of Global Climate Strike Week, a movement inspired by Swedish teenager Greta Thunberg, who skipped school to protest against insufficient action taken by adults to address climate change.

Robin Pho, 39 year-old founder of clean energy firm Right People Renewable Energy, who travelled to SG Climate Rally on an e-scooter, said: “On Friday, when students around the world skipped school for Climate Strike, that approach was too aggressive for Singapore. But you can see from this rally that Singaporeans—particularly the youth—are passionate about the cause, and this is an event where we can peacefully show our concern without creating a ruckus. We don’t want anything like Hong Kong [protests for democracy].”

Though the attendance was no match for Pink Dot, Singapore’s annual gay rights rally which attracted around 21,000 participants last year, it is the first ever demonstation for climate action in the conservative city-state, where protesting is equated with troublemaking.

At the end of the rally, the organisers told Eco-Business that 1,752 registered attendees had showed up, but estimated that a few hundred more people, including foreign residents who were not eligible to join in, supported on the sidelines. “A lot of people are disappointed that foreigners are not allowed to join in the rally here, because climate change affects everyone, regardless of their nationality,” Pho said. 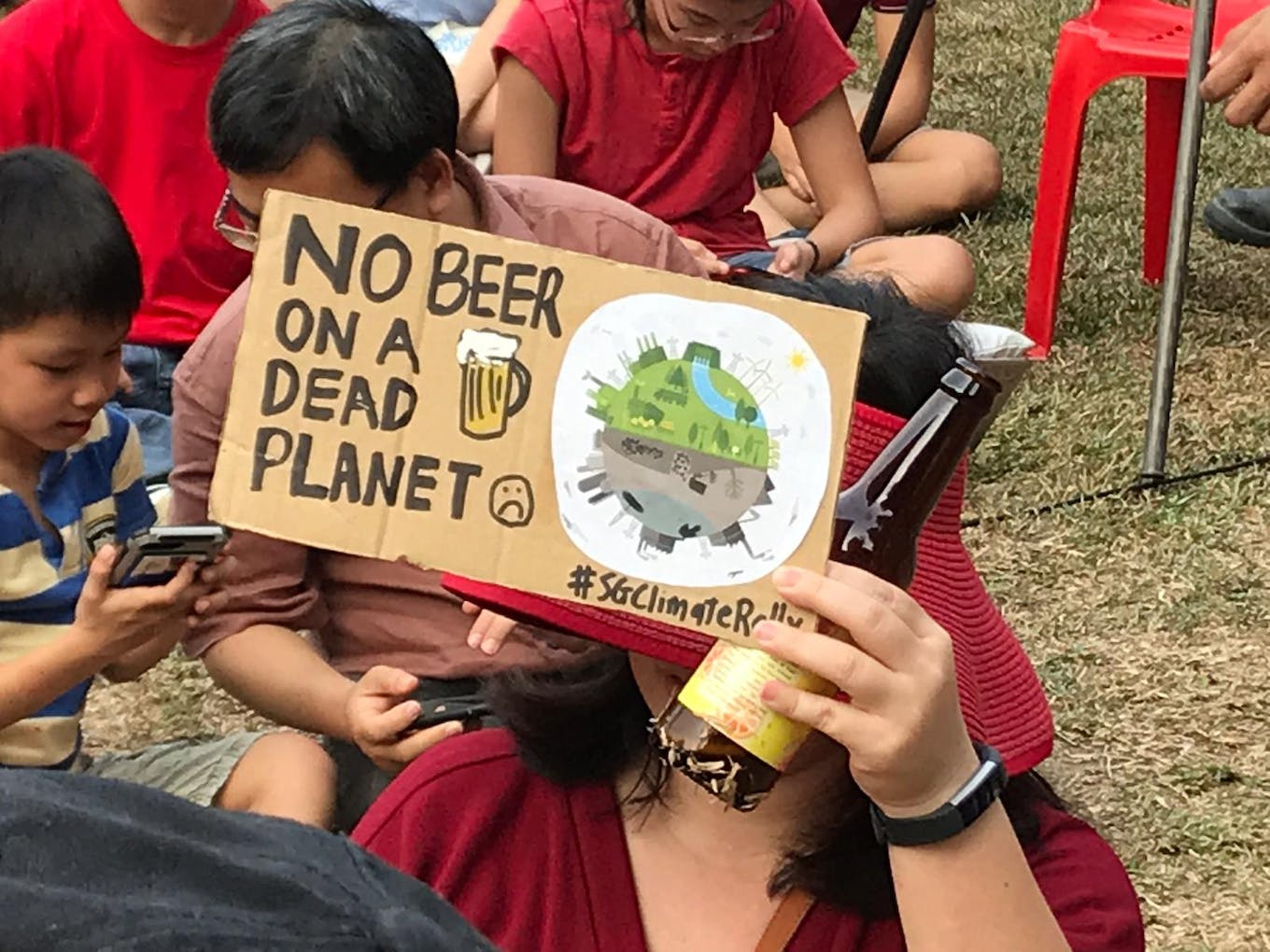 ‘No beer on a dead planet’ reads a placard at SG Climate Rally. Image: Karen Sim 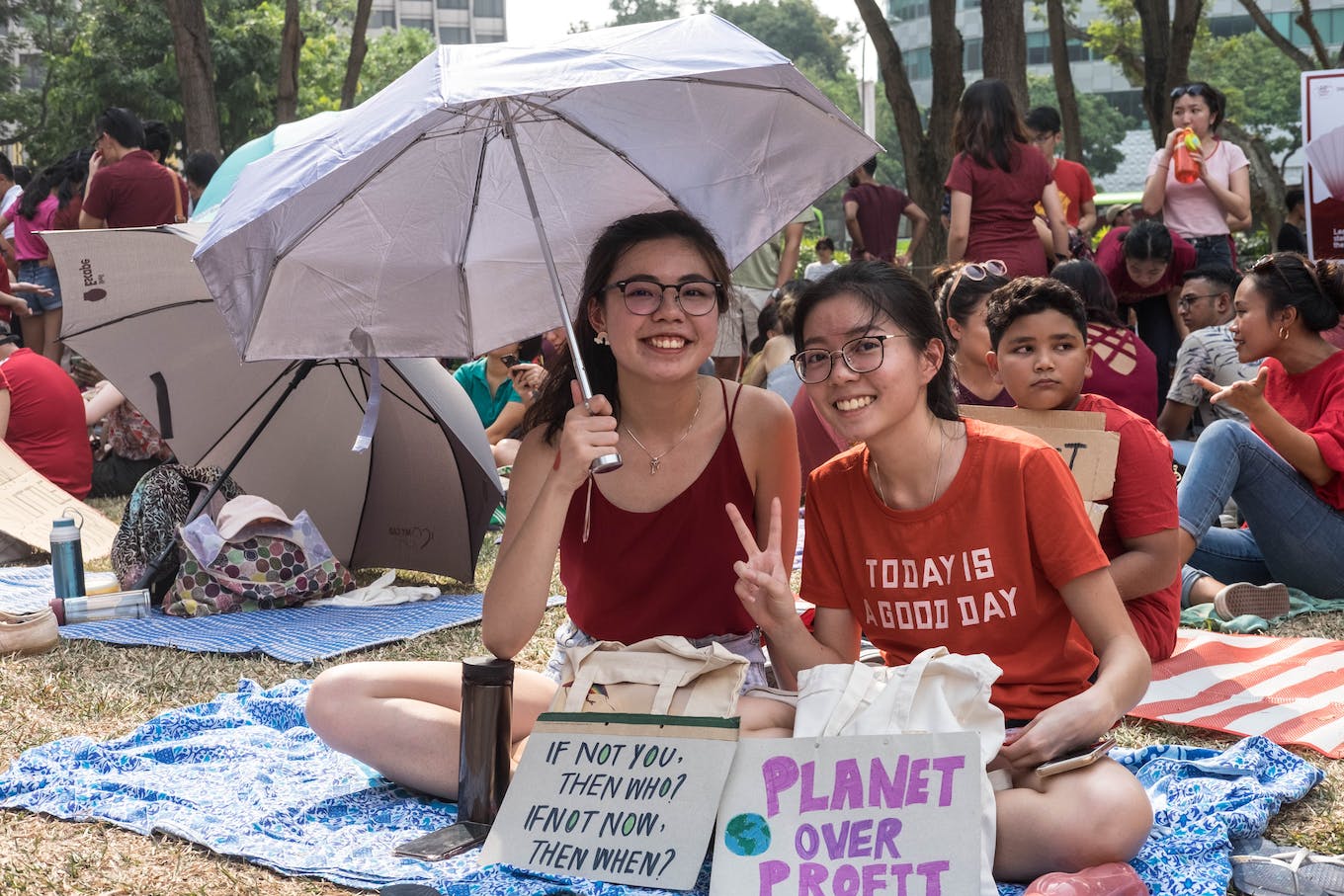 “If not you, then who? If not now, when?” Singaporeans braved 33 degrees Celsius heat and high air pollution to attend the rally. Image: Zafirah Zein, Eco-Business

Jorik Dozy, a 32 year-old film director who makes sustainability-themed films for production company Studio Birthplace, said: “This country is run like a bank. Singapore should be a leader, with the size that it is and the money that it has—but it’s not, and I know that this is not going to change easily. I’m just here because everyone needs to open their eyes to what’s happening to our climate.” 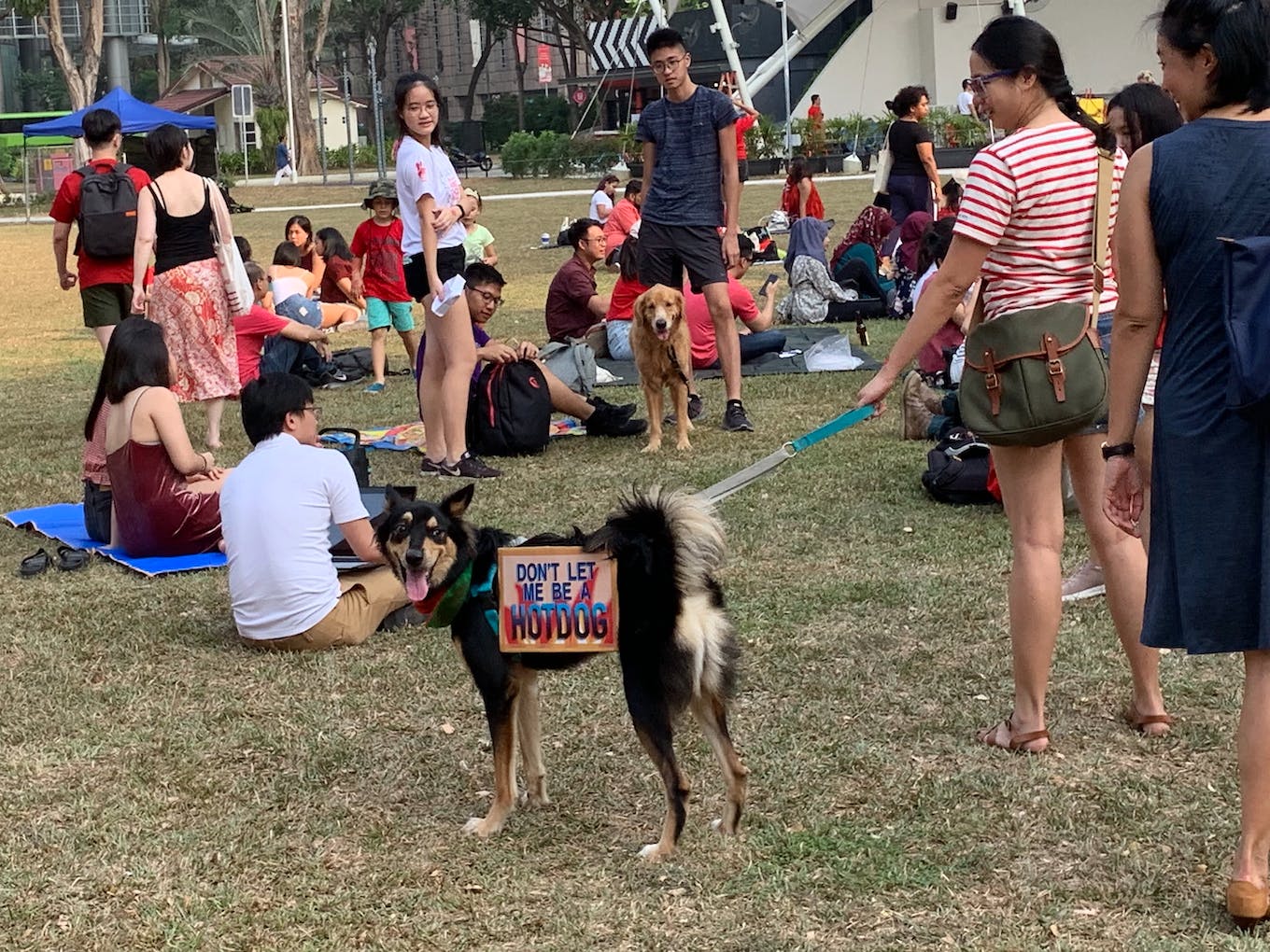 “Don’t let me be a hot dog”. Temperatures in Singapore are rising faster than the global average due to urbanisation. Image: Eco-Business

Kate Burton, a 45 year-old broadcaster with Fox Sports, commented that Singapore had a good opportunity to be a world leader in electric mobility, a sector that has been slow to take off in the city-state. “We could be the first country to have a fully electric fleet and be an inspiration to the world,” she said, adding that EVs are much cleaner than regular cars, even if electricity they use comes from fossil fuels. “It’s much better to get energy from the grid than from individual combustion engines. It’s 40 per cent more efficient.”

Abigail Burton, 9, said she attended the rally because didn’t want to see a future where Singapore was too hot to live in, many animals were extinct, and the melted ice caps had caused sea levels to rise. 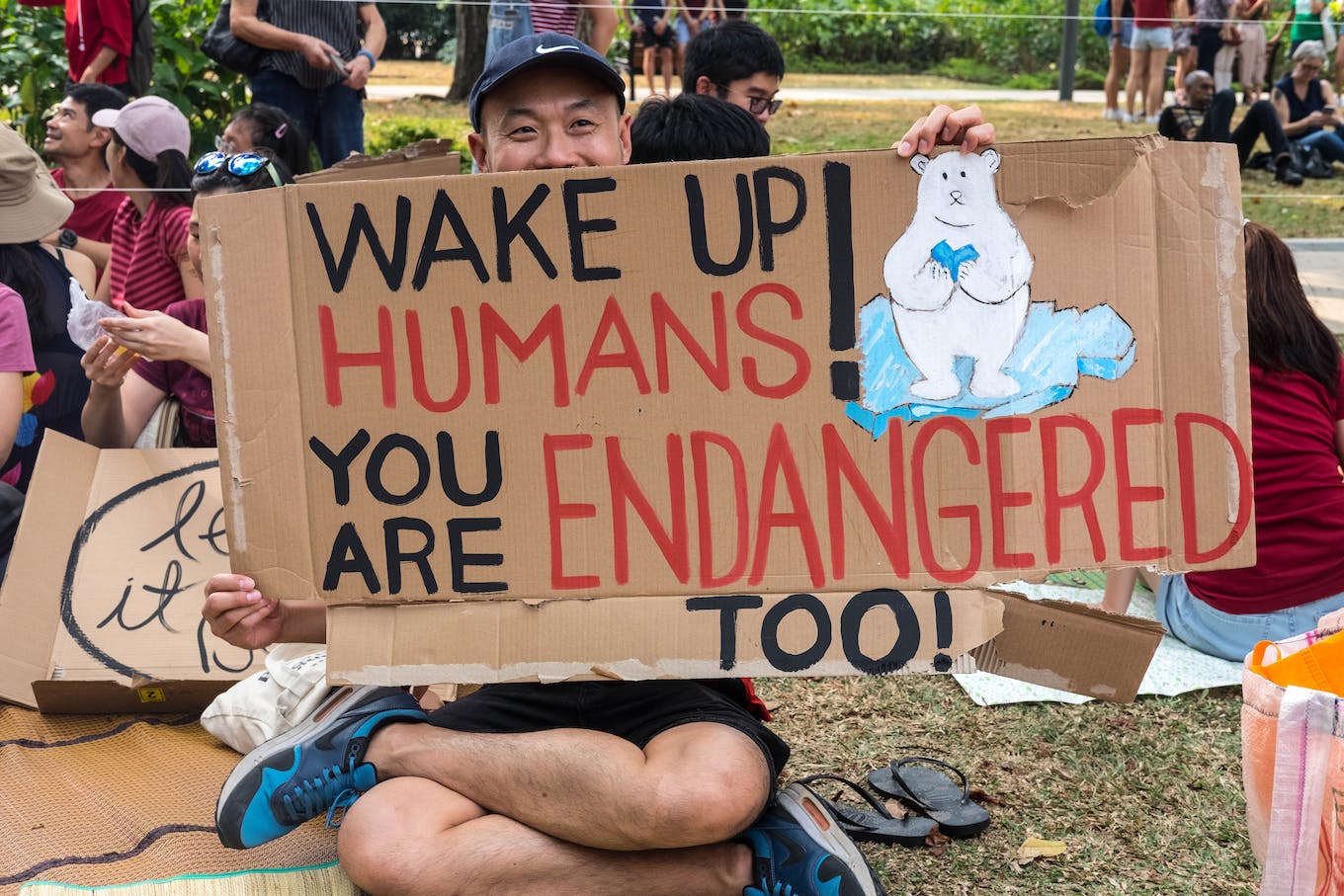 One of the features of the event was ‘Postcard to my MP’, where people could write postcards to their parliament representatives, to call for tougher climate action. This was described as “a non-threatening form of mass political activism that provides space for climate activists in Singapore to process their emotions about the climate crisis.” 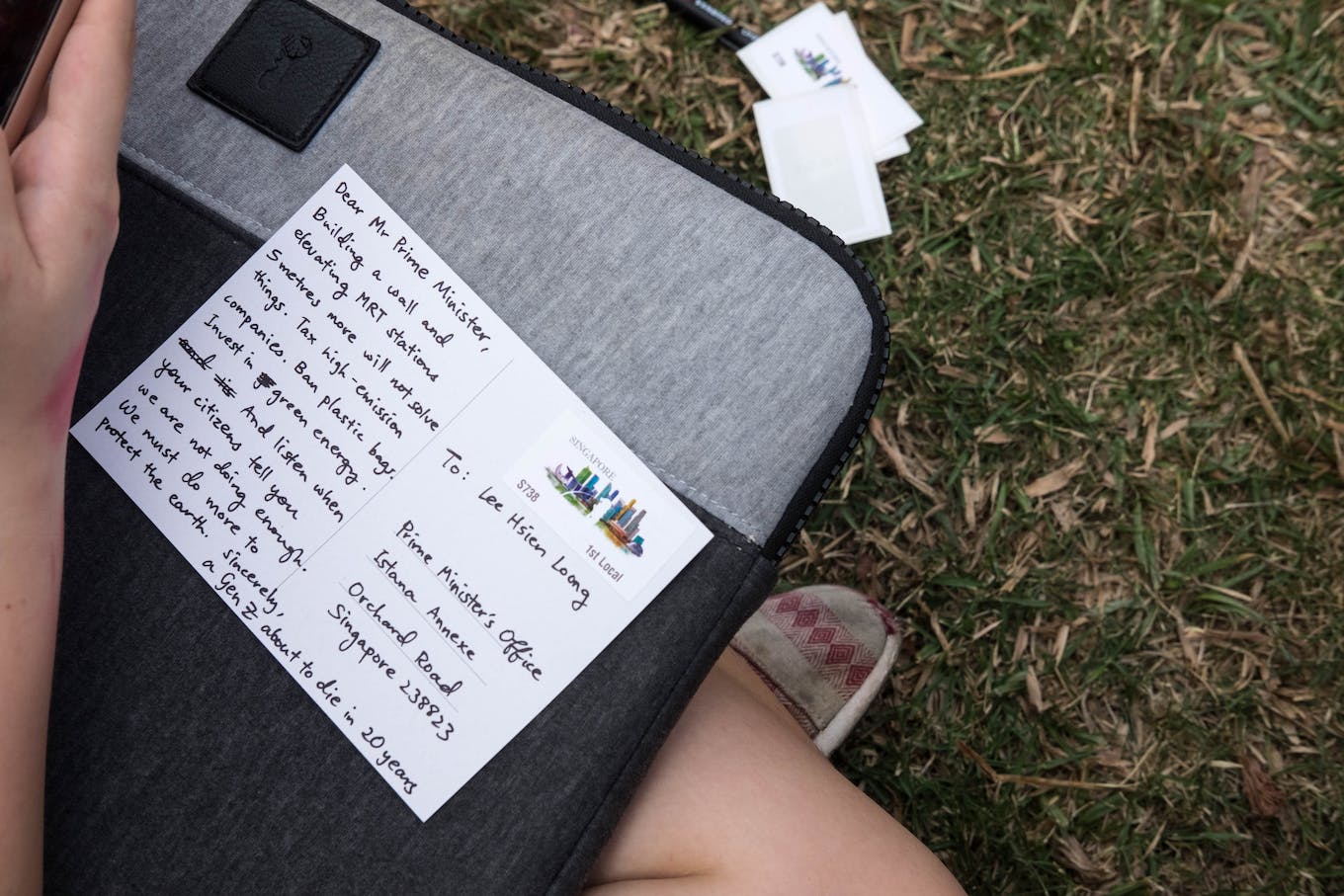 The event culminated in a mass “die-in”, with protesters falling over in a domino effect to symbolise the interconnectedness of people and nature. 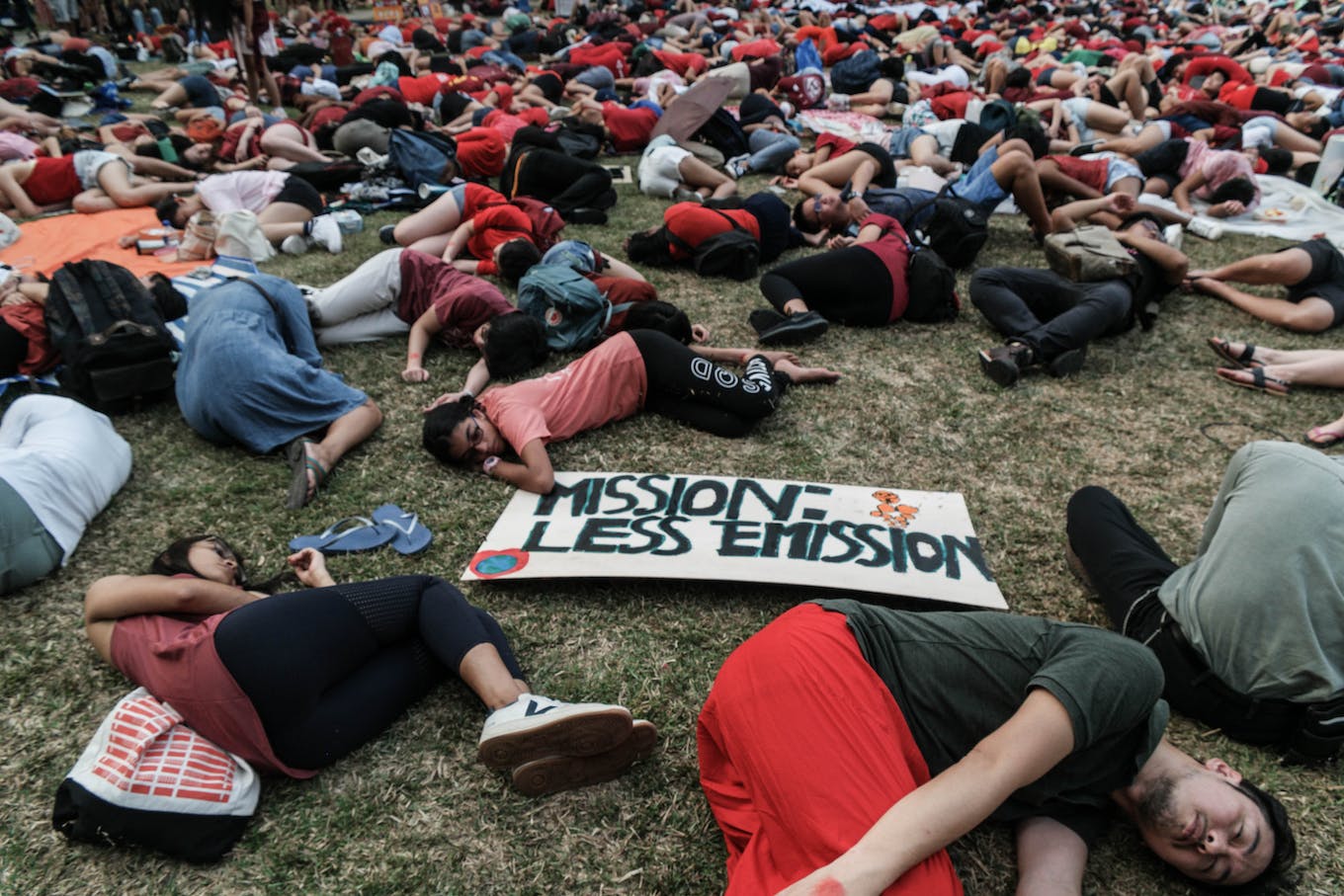 The rally drew some criticism from some on social media. In response to national newspaper the Straits Times’ video of the die-in, one poster wrote: “After they [the demonstrators] are done with this rally, they go home blast their aircon full while eating their steaks.” Another posted: “After that they head over to watch the F1 Grand Prix, the event that consumes more electricity than any other event of the year.”

Not all the attendees came out in support of the rally. Defying the Intergovernmental Panel on Climate Change’s latest study released in October 2018, and almost universal scientific consensus that points to the devastating consequences of climate change, Henry Chew, a 33 year-old real estate agent, attended the rally in support of fossil fuels and claimed that man’s climate impact is “not a catastrophe”.

He said that while he believed that humanity contributes to carbon emissions and global warming, the planet had experienced dramatic periods of warming in the past. “Environmentalists are not necessarily correct [about the impact of fossil fuels on the environment],” he said, likening environmentalism to a “secular cult.” 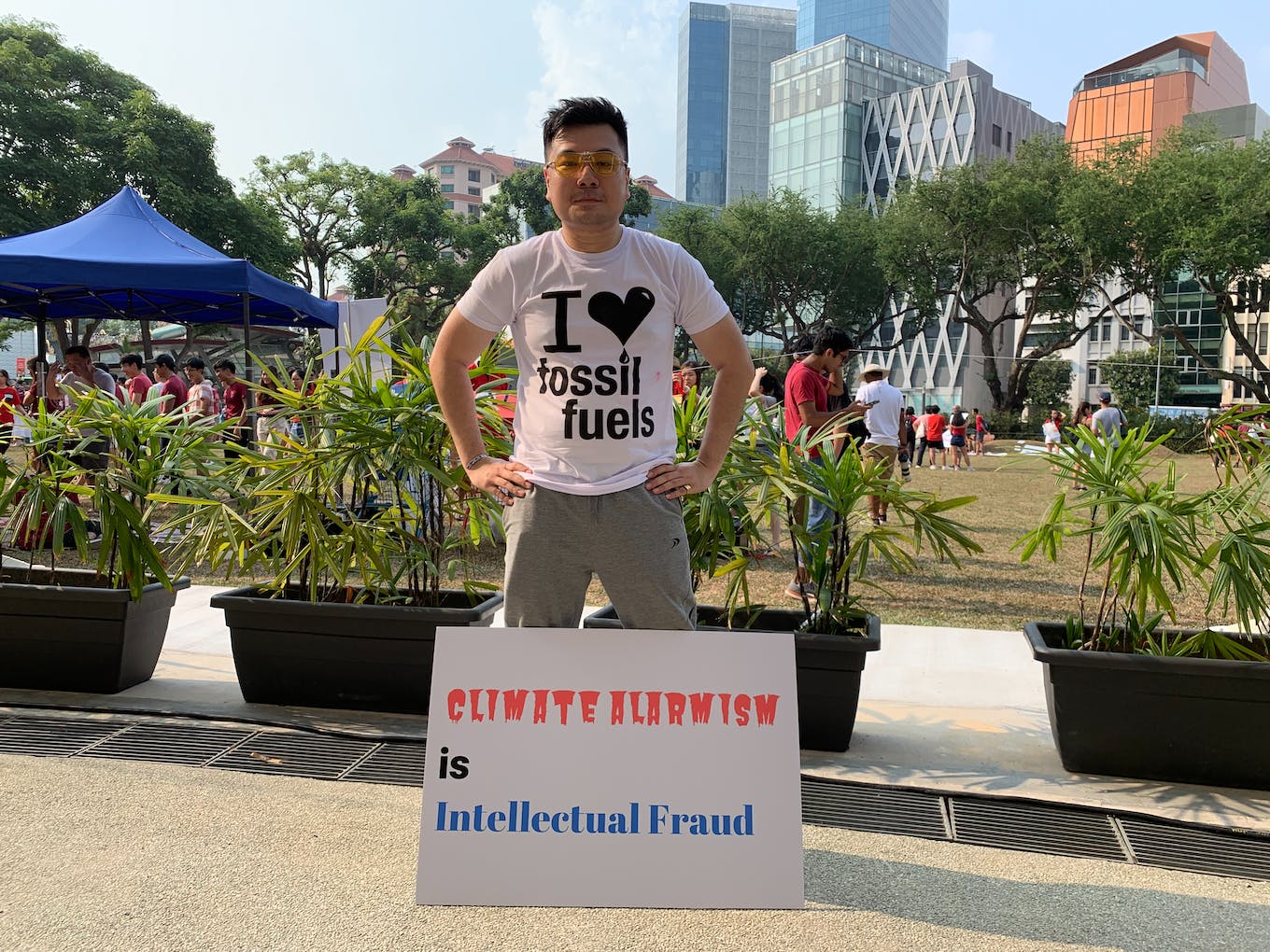 Chew said that while he’s not religious, he sees similarities between environmentalism and the idea of original sin. “Man built skyscrapers, cars and planes. Environmentalists want us to feel guilty about these achievements. But it is due to the immense benefits of fossil fuels that we lead such comfortable lives,” he said.

Besides carbon emissions and global warming, is Chew a fan of the air pollution from burning fossil fuels? “Of course not,” he said. “But coal plants have chimneys that scrub the pollutants before they’re released into the atmosphere.”

Air pollution is only a problem in developing countries that cannot afford the technology to clean coal emissions, he said. “It’s a disposal issue, not a [fossil fuels] consumption issue.”

Chew said that the people who attended the rally have no reason to worry about their future, saying that even huge population growth is a good thing, since there will be more clever people to fix the world’s problems.

“The next generation will live longer, better lives than us, because of the cheap, reliable energy provided by fossil fuels,” said Chew, who denied that he had any affiliation with a fossil fuels lobby group.

“I’m just an ordinary citizen with a different point of view,” he said.