Protesting for the planet: Is climate activism alive in Singapore?

Youths are leading the charge in lobbying politicians and corporations to tackle climate change and species extinction. In a country where demonstrations are exceedingly rare, what are young Singaporeans doing?

Since last year, Extinction Rebellion’s protests and Fridays for Future’s school strikes for the climate have headlined news on climate change.

Around the world, people are waking up to the fact that “our house is on fire”—in the words of Swedish teenager Greta Thunberg, one of the most recognisable faces of the movement—and that drastic emission cuts are needed to avert the worst effects of the climate change catastrophe.

Extinction Rebellion, or XR, is a civil disobedience movement aiming to halt the mass extinction of species and minimise the risk of social collapse. It began on Oct 31 last year with an assembly on Parliament Square in London, and now has a presence in 320 cities and towns in 59 countries.

Even in Asia, a region less known for environmental activism, Extinction Rebellion groups can be found in 15 cities across 9 countries including Hong Kong, New Delhi and Tokyo. 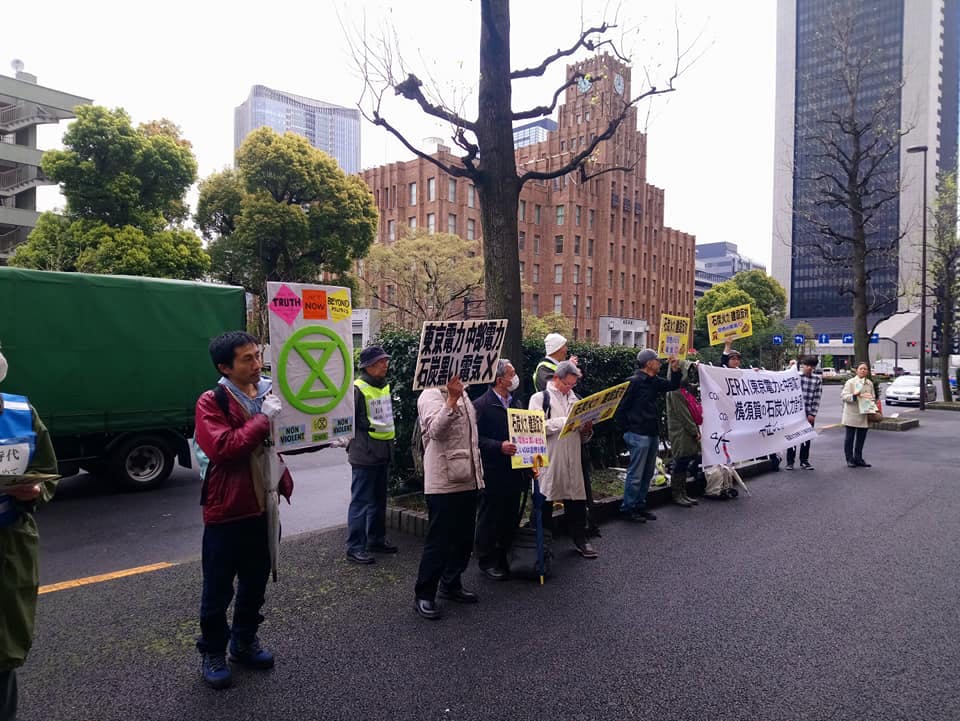 Singapore, one of the world’s richest and most globalised cities in world, has strict regulations that effectively disqualify itself from this global movement. Unless a police permit is obtained, demonstrations of any nature are strictly prohibited under the country’s Public Order Act.

Even Speakers’ Corner at Hong Lim Park, the country’s only spot exempt from the rule, appears to have been silent on the climate crisis, with no reported demonstrations related to Extinction Rebellion or climate action. Eco-Business understands that the National Parks Board, the government agency that manages applications to use the park space, does not keep track of the topic of events or whether successful applicants go on to carry out their activities.

Singapore’s climate policies have been rated as “highly insufficient” by Climate Action Tracker, an independent research consortium that tracks country-level progress on climate action. Even with its newly implemented carbon tax, Singapore is on track to a 3°C warming scenario by 2100, far above the 1.5°C limit recommended by the Intergovernmental Panel on Climate Change.

Is climate activism dead in Singapore?

No demonstrations, but still pushing for change

Public demonstrations are associated with violence and troublemaking, rather than a exercise of the freedom of speech, wrote Singaporean journalist and political activist Kirsten Han in 2012.

Climate demonstrations are meant to garner attention and support through disruptive change. But in Singapore where economic productivity is a priority, demonstrations are more likely to be seen as a waste of time than an inspirational call for change.

The inability and reluctance to demonstrate has not stopped the growing community of passionate youth climate activists, who have adopted alternative ways to make their voices heard.

Historically, environmental activism in Singapore has worked better when individuals and organisations take an evidence-based approach: ‘Here’s something we want to do, here’s the data that proves why it’s worthwhile and let’s collaborate’.

Jay Wong, one of the founders of Fossil Free-Yale NUS, a student group in Singapore

With physical demonstrations prohibited, some 260 youths took part in an online “strike” on social media as part of the March 15 global climate strikes. Using the hashtags #climatestrike and #climateactionsg, they called for better practices across sectors, including waste management, plastic use and renewable energy. 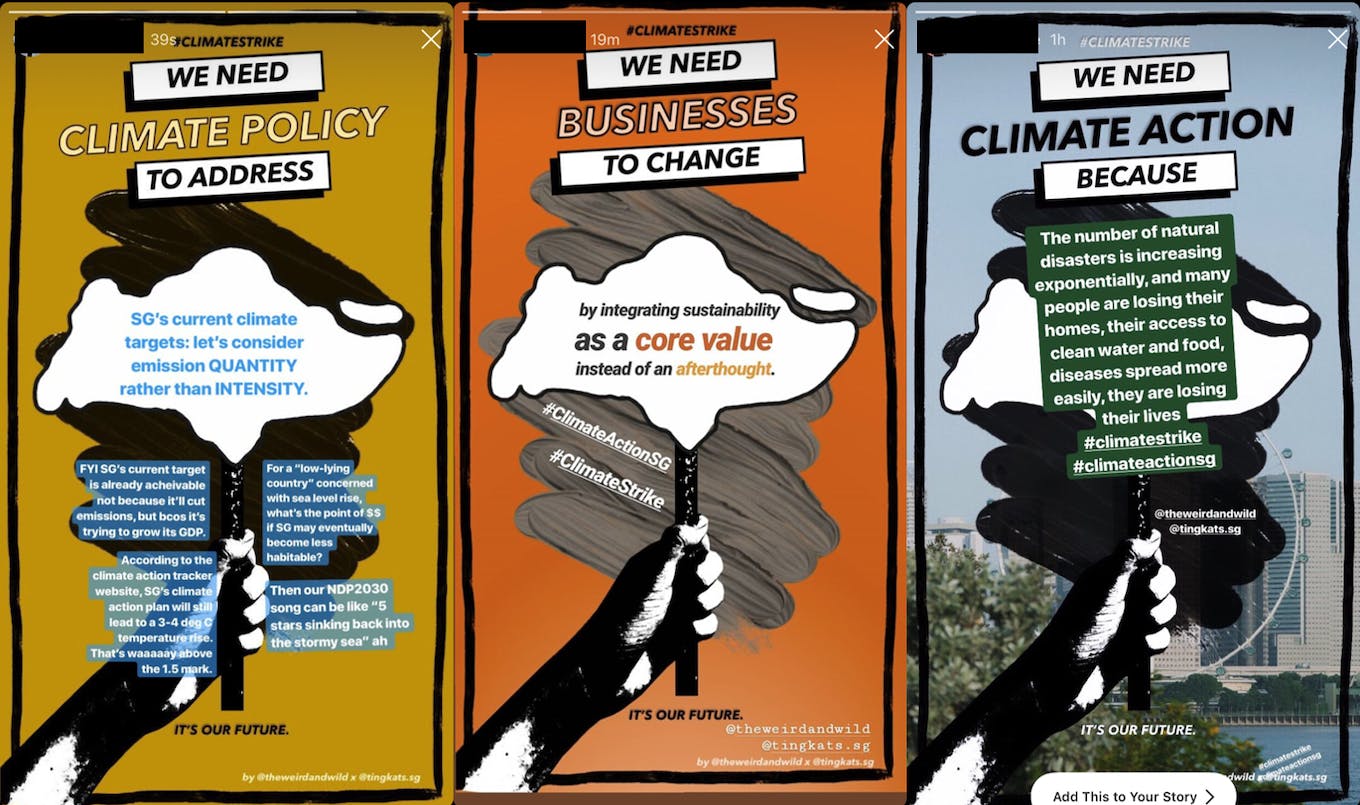 “We didn’t think of getting a Hong Lim licence or striking at a physical place, because we thought that people will be afraid to go out to strike—we did not want to compromise participation. Because that’s the climate we have here, no pun intended.” said Pamela Low, one of the youths behind the online “strike”. 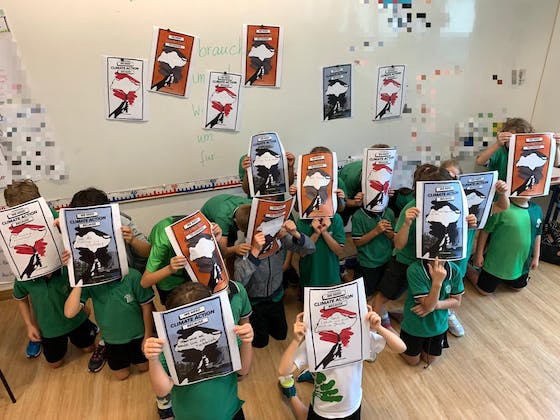 Instead of skipping school, school children from the German European School Singapore engaged in a classroom activity to support the movement using templates from the online climate ‘strike’ on March 15. Image: @CaroReinck Twitter

No concrete policy changes emerged from the “strike”, but the non-confrontational approach managed to reach out to some of its intended audience—schoolchildren. During the “strike”, primary school teachers from the German European School Singapore used the templates for a classroom activity in support of the global movement.

This non-confrontational and collaborative approach has been the strategy for many young climate activists in Singapore. And it is not out of fear of the law that youths engage in activism in this manner, they said.

“Historically, environmental activism in Singapore has worked better when individuals and organisations take an evidence-based approach: ‘Here’s something we want to do, here’s the data that proves why it’s worthwhile and let’s collaborate’,” said Jay Wong, one of the founders of Fossil Free-Yale NUS, a student activist group at Yale-NUS College.

Together with NUS STAND (Students Taking Action for NUS to Divest), it has been pushing for the National University of Singapore to divest from fossil fuels for the past two years. The team conducts teaching sessions and has booths at campus events to engage their peers and garner support on the subject. Earlier this year, they submitted a petition with 817 signatories to the university administration and will continue talks with them.

Although the rate of change leaves more to be desired, the students believe that activism helps to connect and empower people.

“There’s a sense of solidarity that comes with organising collectively. In Singapore, there is a lot of focus on individual action — actions like switching off the lights. But that isn’t nearly enough. It’s when you see people take action together towards a common goal, that you feel that maybe we can make a difference,” said Wong.

But with scientists warning that only 11 years remain for action to avert the worst effects of climate change, is the non-confrontational approach to activism in Singapore the most effective?

“I think there’s a fine line between responsible activism and cautious activism. If you’re just going to bulldoze your way through, it can cause harm to others and even to the cause that you are championing. If you’re too cautious, then do you bring enough courage to truly champion for change?” said Nominated Member of Parliament (NMP) Anthea Ong, who has championed causes such as greater inclusivity of those with mental conditions and more help for the homeless.

“As an NMP, I also sometimes ask myself that question. Should I bring up only issues that are ‘safe’? How should I bring up contentious ones which are equally important, but difficult to talk about?” said Ong, who is also raising funds to support Rohingya refugees with her book, 50 Shades of Love.

Instead of comparing Singapore’s approach with that of other countries, Ong believes that it is more important for local activists to celebrate progress and build on it.

This means getting more people on board with climate action by bridging knowledge gaps and finding appropriate ways to engage.

At the end of the day, if we continue to be responsible activists and not completely dismiss the impact we can have on others and on the cause, then we do not need to feel fearful of speaking up.

While most Singaporeans are aware of climate change, data from the online climate “strike” suggests that they hold a narrow view on climate action. Waste issues dominate the conversation on climate action while the carbon tax, which kicked in this year, was hardly mentioned.

Many Singaporeans also do not believe that they have the knowledge and power to make a difference even though they understand that climate change is a threat that must be addressed.

Ong encouraged people to raise their concerns with their MPs or NMPs. The latter are not elected by citizens but are appointed by the President for a term of two-and-a-half years on the recommendation of a Special Select Committee of Parliament.

“A lot of us have forgotten that MPs are our voices. We vote them in to do just that, so we must engage with them on issues that matter to us, even if they are contentious. I’m sure they will listen, no matter who you are,” she said.

Various initiatives have also started in recent years to support the efforts of activists. These include: A Good Space, a free venue that aims to bring people together to reinvent social change; LepakinSG, a youth-managed platform which maintains an event calendar for environment-related events; and the Climate Change Negotiations Training Workshop by the Energy Studies Institute at NUS that dissects international climate change policies for youths in tertiary institutions.

Youth climate activists said the best way to gain confidence to speak up for the climate crisis was simply to read up and get involved.

“The first step is to understand the context—getting up to speed with what Singapore is committing for the Paris Agreement, regular stocktake through the Biennial Update Report, Singapore Sustainable Blueprint and the upcoming Zero Waste Masterplan—evaluate if we are doing enough and think about how to do better,” said Low, who is part of the community platform Singapore Youth for Climate Action. “As you find out more, you will feel more confident and credible.”

Said NMP Ong: “At the end of the day, if we continue to be responsible activists and not completely dismiss the impact we can have on others and on the cause, then we do not need to feel fearful of speaking up.”