Architects and engineers from the National University of Singapore have invented Cloud Arch, a sustainable, first-of-its-kind ultra-lightweight technology that could revolutionise the way long-span structures are built.

A team of researchers from the National University of Singapore (NUS) said they have developed an ultra-lightweight long-span arched roof by using a new architectural technology called Cloud ArchTM.

This enables builders to save on set-up cost and time, compared to using concrete and other conventional construction materials.

Assistant professor and architect Shinya Okuda of the NUS School of Design and Environment, who led the project, said that they wanted to create column-free structures such as sheds and arched roofs by using ultra lightweight materials. 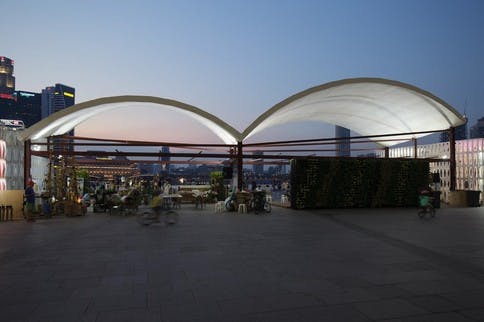 A prototype of Cloud Arch was on display during the Singapore Archifest 2014. The two arches occupy a total area is 250 square metres, with a span of about 14 metres and weighing a total of roughly five tonnes. Image: Fabian Ong

They applied a digital fabrication technology on the EPS foam to form complex shapes in a cost-efficient manner.

“As the material is extremely lightweight, we could achieve significant savings in terms [of] transportation cost as well as the time taken to set up and dismantle the structures. With Cloud ArchTM, we hope to reduce the construction cost by one-third and construction time by half, compared to conventional construction materials such as concrete,” said Okuda.

Polystyrene is a polymer made of liquid petrochemical, which is often used in producing disposable cups and cutlery. Meanwhile, EPS, commonly known as styrofoam, is made of 95 per cent air and five per cent plastic and its composition material can be fire-resistant. It is also recyclable and can be repurposed into other products.

However, it has attracted controversy due to its ubiquitous use and improper disposal. Environmental studies have revealed its composition does not biodegrade easily and could take centuries before it dissolves into the environment. Producing these materials also have high environmental impact including hazardous waste emissions.

But the NUS researchers see there is future for EPS in the construction industry. EPS foam has an almost similar compression strength to weight ratio as concrete and is currently used as landfill for landscape works, explained Tan.

“We are also testing its composite properties when reinforced with bonded fabric as a possible material for permanent construction,” he added.

Director of Web Structures, Dr Hossein Rezai, commented: “A very encouraging fact is that, we have barely needed to increase the EPS composite thickness for the longer spans, but only to reinforce its composite strength. This implies that Cloud Arch’s advantageous ultra-lightweight [characteristics] will be further realised when the target spans get longer.” 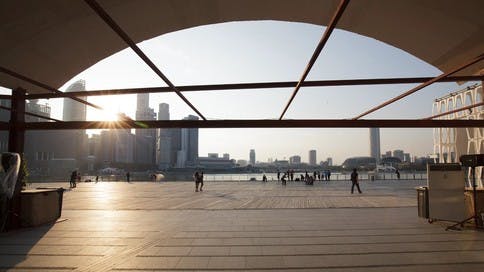 Cloud Arch technology looks to expand into industrial infrastructure such as spans for airplane hangars.

The technology has earned its first accolade as one of the two winners of Singapore’s Archifest 2014 Pavilion Competition held in May and June this year. It has already been granted a provisional United States patent.

The NUS researchers intend to push the boundaries further with the development of a 24-metre long factory roof prototype, with which they intend to enter the industrial infrastructure industry in Singapore.

Through the support of the the NUS-JTC Industrial Infrastructure Innovation Centre, a partnership between NUS and JTC Corporation, they hope to explore other possible applications of the technology, which include developing longer spans for airplane hangars.