The city-state is the only Southeast Asian country that has a carbon tax now. Parliamentarians were cautious in raising suggestions, as they acknowledged that Singapore might lose business to its neighbours if the hike is too drastic.

Singapore’s parliamentarians are calling for more firms in the country to be covered under its carbon tax, ahead of an expected announcement by the government on price hikes for future emissions in February.

The members of parliament (MPs), who spoke during the debate on a private members’ motion on Wednesday, also acknowledged the difficulties that Singapore has in finding the right carbon price, given that countries have adopted varying rules and standards on carbon taxation, and the city-state faces stiff competition from its neighbouring markets that are more lenient about emissions.

Singapore has been charging S$5 (about US$3.70) per tonne of carbon dioxide on firms that emit over 25,000 tonnes of emissions a year since 2019. It is one of the lowest carbon prices globally, but covers about 40 firms that produce 80 per cent of national emissions. The average tax in Europe is over 10 times higher but has half the coverage.

Responding to the MPs’ suggestions, Singapore’s trade and industry minister Gan Kim Yong said that firms will be given time and financial support to adapt to the changes. He did not provide details of the new tax structure.

Singapore’s revised rates for 2024 and beyond is expected to be revealed next month during its annual budget session. The government has said that the current prices are too low, echoing calls by observers and activists. Some groups put the necessary carbon price at over US$100.

During the debate, Louis Ng, a member of parliament with the ruling People’s Action Party (PAP), suggested that firms that emit over 2,000 tonnes of emissions a year pay tax too. There are about 200 facilities in this category and they are already required by law to report their emissions. Other MPs suggested for the tax to be tiered in favour of smaller firms.

There were also several MPs who said that Singapore might lose business to other countries that either do not have a carbon tax, or have less stringent rules, if the country’s carbon price hike becomes too drastic.

For example, China and South Korea now have systems that provide certain business sectors free emissions allowances. In Southeast Asia, apart from Singapore, only Indonesia has a carbon tax that will start this year with a price of US$2.10 per tonne of emissions. Malaysia has said it would tax carbon but has not provided details.

“There are more than 60 different carbon pricing initiatives worldwide. Each regime adapts with different strategies based on its own goals and constraints,” said PAP MP Foo Mee Har. “We need to develop our own unique playbook for carbon pricing, and ensure that any change is set and paced carefully to avoid dislocating our industry or losing our attractiveness as an investment location.”

“The rigorous public discussion on the carbon tax hasn’t been reflected in Parliament thus far. It is difficult to reconcile the messaging of the MPs with Singapore’s undertakings at COP26,” said observer Yvonne Zhang, who leads Deloitte Risk Advisory’s sustainability and climate change practice in Southeast Asia markets, of the concerns on regional competition. She added that as Singapore prides itself as a green finance and commodity hub, it needs to be more ambitious in curbing its emissions.

“I think the real risk is when you set the carbon tax too low, because that would expose Asian businesses to significant regulatory overcorrection in the years to come,” said Reema Bhattacharya, senior analyst at consultancy Control Risks.

As it stands, Singapore’s low carbon price does not seem to have nudged polluters, according to recent research suggesting that there have been no significant change in carbon emissions the year the carbon tax was levied.

MPs called for the government to be transparent about the timeline of the future carbon price hike. They also want to see more revenue channeled into helping low-income groups manage costs, and helping fossil fuel workers find new jobs.

Activist group Singapore Climate Rally believes that more needs to be done by the government, given that the increase in carbon pricing will coincide with a separate rise in Singapore’s goods and services tax.

“Short term measures like rebates must be followed by more comprehensive measures aimed at raising wage levels for workers, in particular lower-income workers, in order to meet the demands of a just transition,” said Bertrand Seah, a member of the Singapore Climate Rally movement. 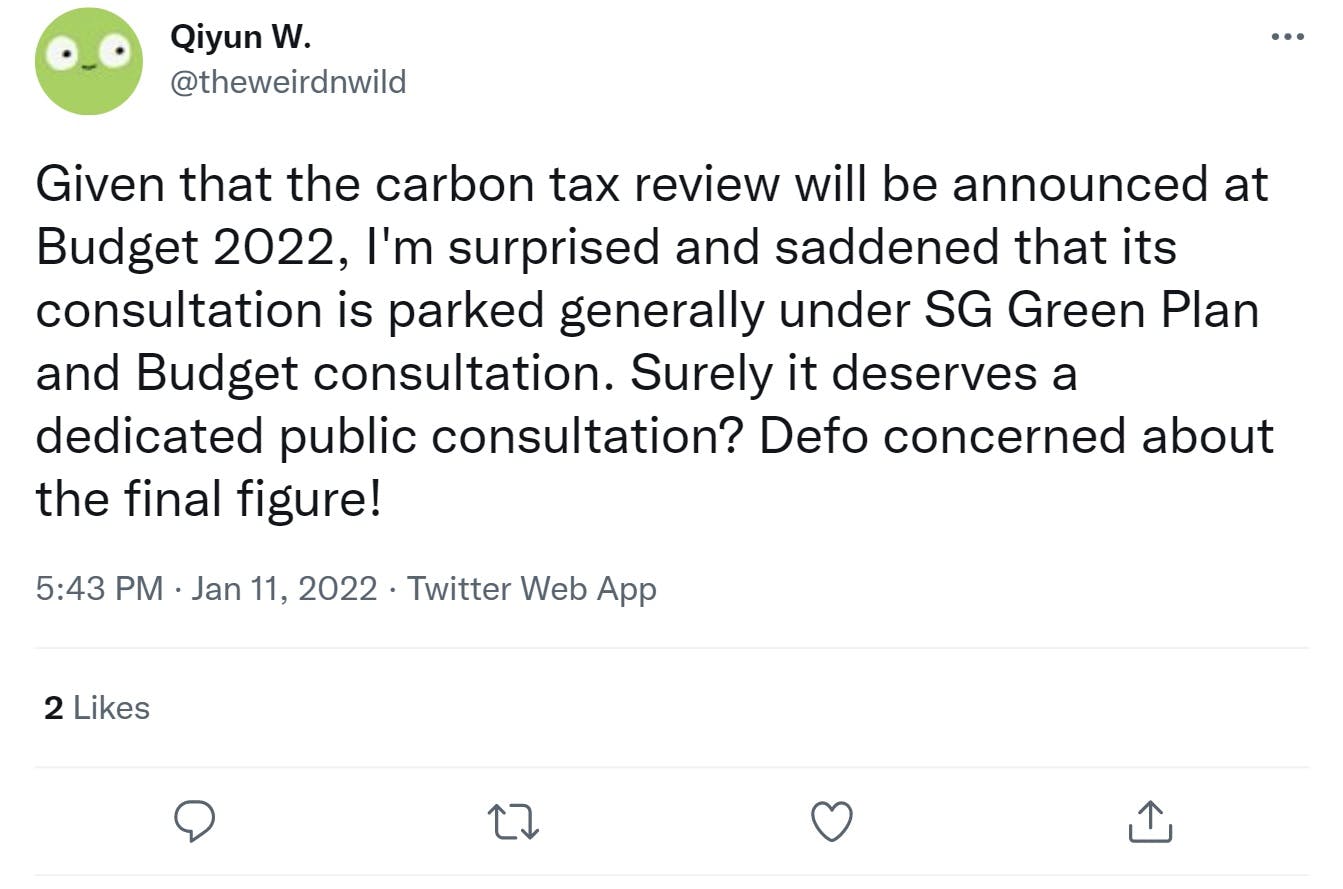 Climate activists also told Eco-Business that they were disappointed by a lack of public consultation for the latest expected adjustments to the carbon price. The government said that it had sought feedback on the hike as part of its engagement exercise for the wider Singapore Green Plan.

The issue of carbon offsets also dominated the discussion in Parliament on Wednesday. Some MPs called for Singapore to join the international carbon trading market to fulfil its climate commitments, touting the move as a “win-win” for both Singapore and the host countries of green projects, while others expressed caution about such claims.

Associate Professor Jamus Lim, an opposition MP from the Workers’ Party, said the government has a responsibility to prevent greenwashing. Critics have said that offsetting projects have historically failed to achieve emissions reductions, because the purported benefits could have been achieved even without intervention. In some cases projects could even displace local people.

“Just as the government plays a role in regulating false claims of efficacy in pharmaceutical products, or imposes conditions to ensure product safety in food and children’s toys, it should also play a role in ensuring that claims on green practices are broadly justifiable,” said Lim.

Professor Koh Lian Pin, a nominated member of parliament who is not affiliated to any party or constituency, said that the government needs to ensure that carbon projects deliver real, additional and permanent benefits. “[This is] not just for climate change mitigation, but also for communities and biodiversity on the ground ,” said the ecology don.

Singapore has a voluntary global carbon exchange. The government-backed bourse is looking to auction carbon credits this year following trials with forest protection projects in Africa, Asia and Latin America.

Environmental activist and sustainability professional Woo Qiyun said she was looking forward to more disclosures from the government and large emitters.

“Will the percentage of total emissions offset by carbon offsets be made known to the public? What type of offsets were purchased and at what price? Will there be a long-term target to gradually reduce the amount of offsets used?” she said.

“It is clear that all sides recognise the need for and the challenges of decarbonisation. Next up, there needs to be greater scrutiny on how initiatives will be implemented as that determines if the efforts taken create real impact in a way that’s also just and equitable,” Woo added.