Atomic energy, along with coal, were banned in an earlier round of applications. Indonesia, Malaysia and the Philippines are among Southeast Asian countries exploring the power source in their future energy plans.

Only plans involving coal will be rejected outright in the latest call for applications that started on Friday (1 July). In an earlier round that ended in April, both coal and nuclear power were banned.

EMA said it is open to proposals from “diverse” low-carbon energy sources in the region, in response to a query from Eco-Business on why the change was made.

“EMA will also be considering a range of factors such as price-competitiveness, source diversity and safety when evaluating the proposals,” added Lee Seng Wai, director of the energy connections office at EMA.

Singapore wants to fulfil four gigawatts, or 30 per cent of its energy supply, by 2035 with imports of clean energy – defined as electricity produced with at most 150 kilograms of carbon dioxide emissions per megawatt-hour. Projects could start higher but must reach this level within five years of commercial operation.

Nuclear energy could fit the bill, with an “emissions factor” of 13 kilograms of CO₂ per megawatt-hour, on par with wind power and about a third of solar power, according to the United States energy department. 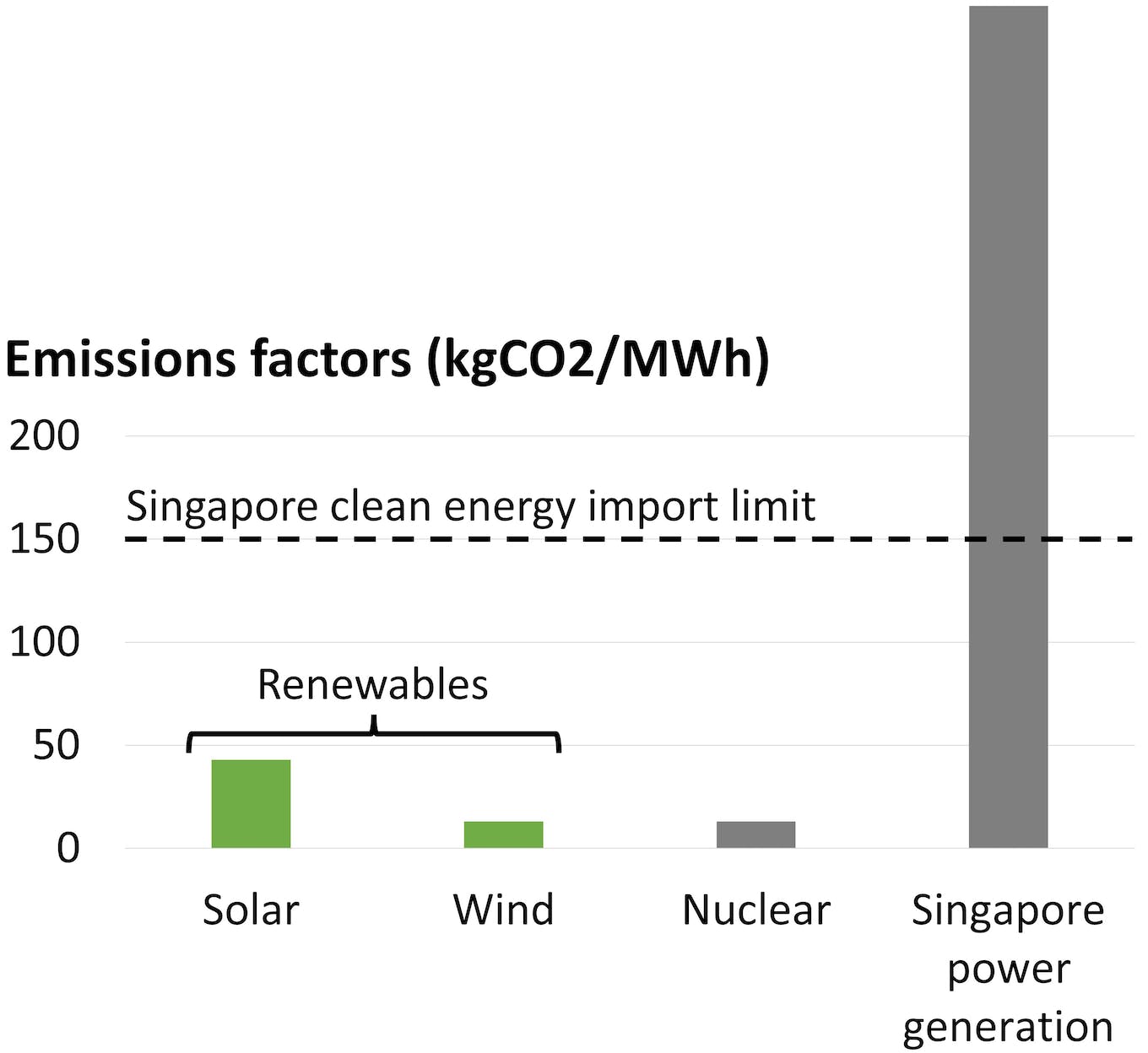 Proponents of nuclear power say the energy source can provide a consistent flow of low-carbon electricity – something wind and sunlight struggle to achieve. Critics fear the lasting impact of both disasters and nuclear waste, a permanent solution for which largely does not exist.

Neighbouring Malaysia and Indonesia could be possible candidates to supply Singapore with nuclear power based on their technological experience, said Dr Philip Andrews-Speed, a senior principal fellow at the National University of Singapore’s Energy Studies Institute.

“They have been working on nuclear power for decades. They could, in principle, tomorrow, make a decision (to build a reactor),” Dr Andrews-Speed said.

“But of course, as with everywhere in the world, this is a political issue. It is not purely energy policy,” he added.

The 2035 time frame EMA has set for Singapore’s energy imports may also be tight. Malaysia is thinking of building a new research reactor to replace its current 40-year-old model, according to a policy paper published this year, but no time frame has been set. It does not have a commercial plant.

The country did explore accelerating its nuclear power programme about 10 years ago, but progress has stalled under recent administrations.

Both Indonesia and Malaysia have said they will not export renewable energy, complicating Singapore’s plans to buy clean energy from its neighbours.

“Maybe Singapore is indicating it is accepting a wider choice of technologies,” Dr Andrews-Speed said, of Singapore’s decision to allow nuclear power in its latest call for import proposals.

He added that the cost of nuclear power over the next few years will depend on the type of technology used and the countries involved in building the reactors.

Interest in nuclear energy worldwide has crept up recently, even outside its traditional supporters like France and China, amid high energy demand and fossil fuel prices. The United Kingdom wants to more than triple its capacity by 2050. Japan and the Philippines are planning to restart shelved plants.

Nuclear power is not in Southeast Asia’s regional green finance guidebook because of the high risks nuclear waste brings. The European Union considers nuclear energy projects green following a landmark vote this week, but its inclusion had attracted sizeable opposition from lawmakers and environmental groups.

Singapore does not have a nuclear power plant. In a scenario-planning paper released in March, EMA said the city-state could rely on domestic atomic energy to get its energy sector to net-zero emissions by 2050, if the world goes through a disorderly energy transition.

Singapore’s latest call for energy import proposals will be open for 18 months, till the end of 2023. The earlier round lasted only five months, and EMA said firms had asked for more time.

The agency said proposals from the earlier tranche will be automatically considered under the new round, which takes place under tweaked rules that allow consortiums to modify their plans after submitting initial papers.

EMA had earlier said it received 20 proposals in the earlier round, which detailed plans to import solar, wind, geothermal and hydropower from Indonesia, Malaysia, Thailand and Laos.