The city-state is mulling a 10 to 20 cent fee that will be refunded when consumers return drink cans and plastic bottles for recycling. Collection points will be set up near supermarkets, town halls and sports halls.

Singapore consumers may find themselves paying an extra 10 to 20 cents (about 7 to 14 US cents) upfront for their colas come mid-2024, as authorities look to impose a new surcharge to encourage recycling.

Under the proposed “beverage container return scheme”, consumers can get a refund of the deposit if they return empty drink containers at shops or recycling machines, instead of tossing them into trash bins.

The initiative is Singapore’s latest bid at improving its domestic recycling rate, which stood at 13 per cent in 2021 – the lowest since 2012. Only 6 per cent of plastic waste was recycled last year, the rest was incinerated.

The country’s National Environment Agency (NEA) said that based on feedback it had gathered, most people should accept the proposed surcharge range. It also pointed to countries like Finland and Germany, which have higher surcharges of up to 40 cents (28 US cents) per item for similar programmes.

The final amount, to be set as a fixed price per item, will be confirmed following a public consultation that launched on Wednesday (20 September).

Only metal cans and plastic bottles of pre-packaged drinks – which number over a billion a year – will be included in Singapore’s scheme for now. Producers and importers will have to mark them out with identifying logos.

The containers of drinks made and filled in-house, such as herbal concoctions sold by Singapore’s traditional medicinal halls, will be exempt. Beverage cartons and glass bottles, which are used locally in smaller quantities, may feature later, NEA said.

The agency is planning to mandate that collection points for empty beverage containers be set up at all supermarkets with floor area exceeding 200 square metres. This would cover about 400 stores, or two-thirds of all such locations islandwide.

There will be more collection points in town centres and sports halls. Small shops can also volunteer to set up return stations.

Some locations will have “reverse vending machines”, which can process returns and refunds without a human operator. NEA has not confirmed how many machines will be deployed. 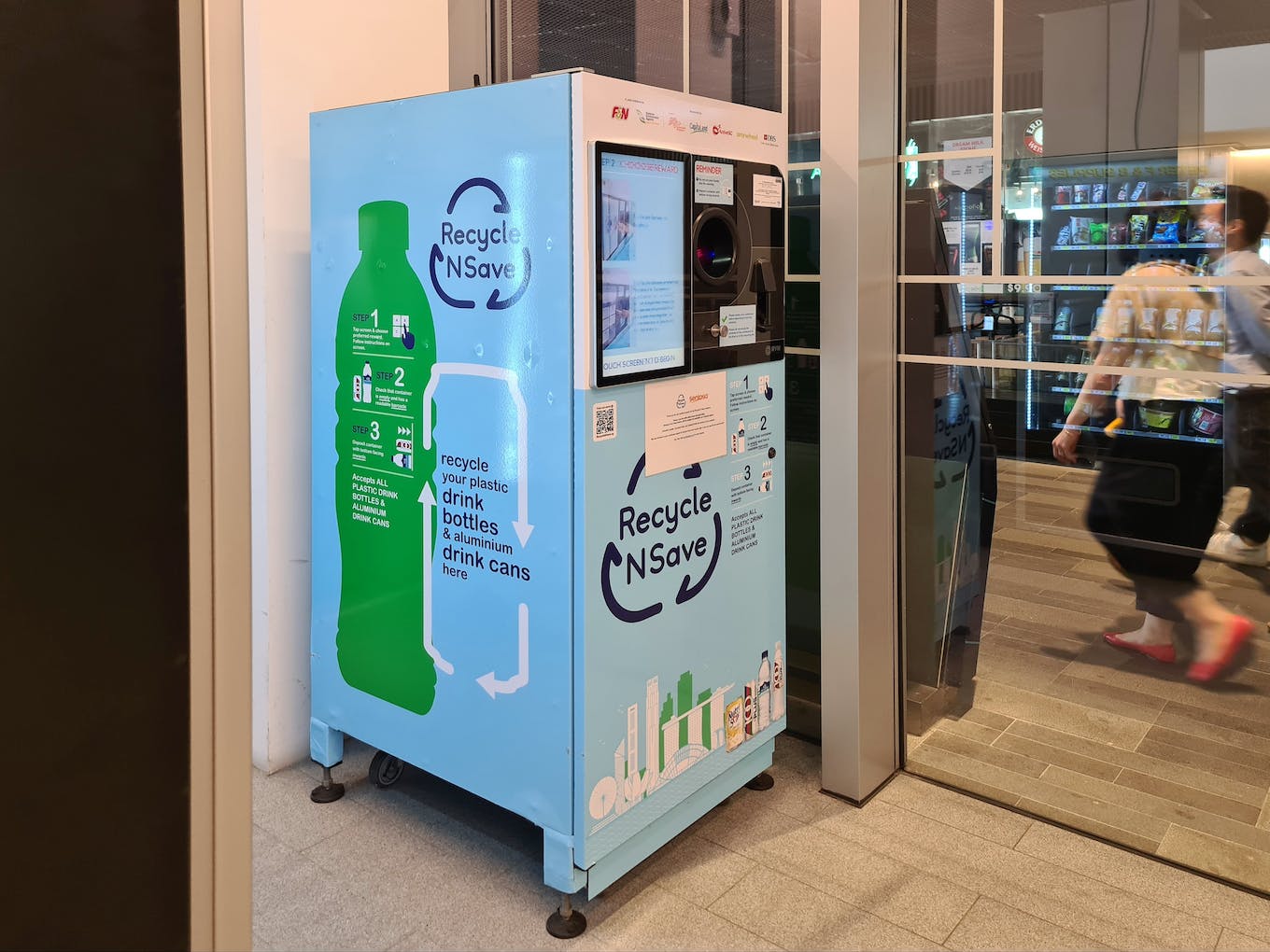 Emptied bottles and cans do not need to be washed before they are returned, it said.

Gary Lim, a 27-year-old healthcare administration worker, said the scheme could be made “much more convenient” if more supermarkets, along with every subway station and shopping mall, can house return points.

Lim said he already brings drink containers home to recycle later when dining out nearby.

“The willingness (to return the containers) is there, but it is balanced against inconvenience,” he said.

Under the proposal, the deposit will first be levied on drink manufacturers and importers, who will pass the cost down to buyers.

Middlemen, such as eateries and Singapore’s popular open-air hawker centres, can opt to serve pre-packaged drinks in cups, without the deposit, and return the containers in bulk themselves. They can also pass down to patrons both the surcharge and responsibility to send the beverage containers to collection points.

Passing on containers and costs to patrons would be more convenient for drink stalls at hawker centres, said Anthony Low, chairman of Boon Lay Hawkers’ Association, as tenants have limited space to store hundreds of empty drink cans every day.

Hawker stalls, especially older ones built before 1985, can be as small as five square metres, making storage difficult.

“The overall direction towards more recycling is good,” Low said, but he added that drink stall owners may need to help explain to patrons why there are higher upfront costs in the early days of the scheme.

The entire operation is proposed to be handled by a private non-profit, and be funded with additional fees that the entity levies on beverage producers and importers, under what is known as an “extended producer responsibility” principle. Singapore launched a similar programme for electronic waste last year.

Jia Ruiying, who runs Eastern European grocer Baltic Supermart, said it is almost certain she will have to accept the higher costs of keeping to the original barcodes on her imports.

Changing each barcode on the thousands of drinks she ships in will require too many extra man-hours, while the administrative hassle will also be huge, Jia told Eco-Business. She may have to charge S$0.30 (US$0.21) more per beverage to cover such costs, she added.

NEA said a “grace period” will be provided for producers and retailers when the scheme launches to clear existing stock and conform to new rules.

F&N Foods, a major beverage producer in Singapore, said it is “supportive” of the beverage container return scheme.

“We will work with NEA and the industry to achieve BCRS’ objective and develop a cost effective model, which will be a crucial success factor for the implementation of the scheme,” said F&N Foods managing director Jennifer See, referring to the scheme by its acronym.

See added that “time, resources, innovation, education and legislation” will be needed, to build the infrastructure for the scheme “from the ground up”.

The beverage container return scheme was first mooted in 2020, and was supposed to launch this year. However, it faced several rounds of delays, in part due to industry requests for more time.

As it stands, none of the details of the scheme have been confirmed, pending the public consultation and legal formalities expected next year.

Nevertheless, there have already been a flurry of related activities recently.

Norwegian reverse vending machine firm Tomra opened a Singapore showroom in March. Swedish competitor RVM Systems told local newspaper The Straits Times that it is looking to make a similar move this year. Fifty RVM Systems machines are already installed in Singapore, as part of a 2019 trial with NEA and F&N.

The Plastics Recycling Association of Singapore, set up last year with government and private entities, is looking into building the first plastic bottle recycling plant in the city-state.

Singapore has been shipping out much of its recyclable plastics for processing, but such activities have been hampered by a ban on exporting contaminated plastics in 2020, in line with the Basel Convention, a global waste treaty.

With the container return scheme, NEA said that the local recycling industry will be boosted by a more dependable stream of food-grade plastics and metals.

NEA is proposing a target of collecting four out of every five metal cans and plastic bottles sold in Singapore, based on “high performing” overseas schemes it studied.

In examples the agency provided, including jurisdictions in Australia, Europe, North America and the Middle East, collection rates ranged from 70 to 98 per cent.

South Korea is aiming to launch a similar scheme in December, but focused on takeaway cups.

Associate professor Jia Lile, a behavioural scientist at the National University of Singapore who contributed to planning Singapore’s initiative, said a 80 per cent return rate is an “attainable long-term target”.

“I don’t imply that the process will be smooth sailing; much hard work is ahead of us collectively,” Jia said, adding that public communication campaigns will be essential in getting people on board.

Jia said the proposed 10 to 20 cents deposit will be an effective nudge, if the overall messaging and management of the scheme is done right. He added that the deposit range also took into account its impact on disadvantaged groups.

Dr Amy Khor, Singapore senior minister of state for sustainability and the environment, said during a media visit to a local supermarket set to be a return point, that the government wants to make it “as convenient as possible to return the used beverage containers”. The authorities will work with the scheme operator to increase the number of return points.

“I would like to emphasise that the deposit really is not a tax on beverages, because consumers will be able to get a full refund of the deposits paid as long as they return the waste beverage containers,” she added.

Single-use plastics, like drink bottles, are major culprits in global marine pollution. They are also produced from fossil fuels, the dominant cause of global warming.

In Singapore, the concern is that incinerating such waste adds to its carbon emissions, and takes up space in its only landfill, which authorities are trying to extend the lifespan of past 2035.

Globally, negotiations have started on a treaty to end plastic waste, but countries remain divided on how much attention should be placed on reducing the use of plastics in the first place.