Should Southeast Asia return to 'native' packaging to tackle the plastic crisis?

Solutions to mounting plastic waste in the archipelago require careful consideration of the local context, or they may not work.

Should the future of packaging in Southeast Asia take cues from the past to unravel the plastic crisis?

The regional bloc is home to some of the world’s biggest plastic polluting nations because of a toxic mix of rapid urbanisation and poor waste management infrastructure, and experts suggest that solutions to plastic pollution should come from local customs rather than emerging technologies and business innovations.

Southeast Asia produces 1.14kg per capita plastic waste per day, with a high proportion of that ending up as marine litter. North Americans produce the most at 2.21kg per day, according to World Bank statistics. The volume of plastic waste is expected to triple by 2025, according to data from the United Nations Environment Programme (UNEP).

Dave Albao, executive director of the Philippine Reef and Rainforest Conservation Foundation, Inc. (PRRCFI), which manages the Philippines’ natural areas, says that “natural packaging” such as banana leaves is often a better option for the environment than circular solutions such as refill stations, because consumer habits are taking too long to change.

Albao is based in Bacolod in the province of Negros, and is working on a campaign to increase public awareness of the impacts of marine plastic pollution and finds ways to reduce plastic waste with owners of sari-sari (convenience) stores, which sell high volumes of consumer goods in disposable plastic sachets. One solution to cut down on single-use plastic sachets has been refill stations, bringing back old methods for dispensing for soap, detergent, oil and other goods. 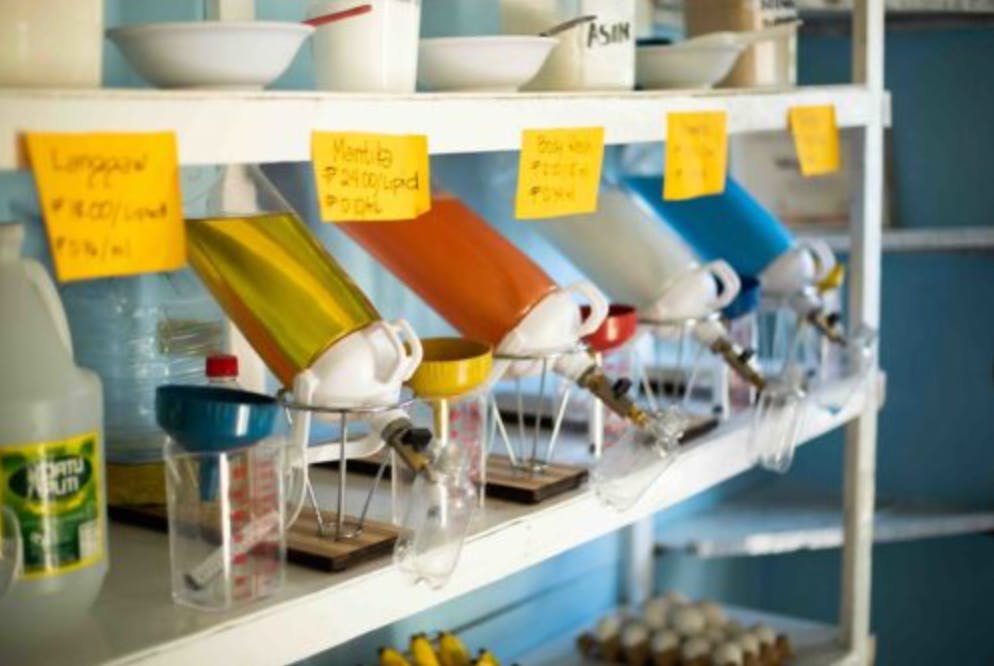 Refill stations in a sari-sari store in the Philippines. Image: USAID

“It [reducing plastic sachets] is a cultural story, not just an environmental story. We brought back glass bottles for refilling goods, which were used by our elders before the advent of sachets,” said Albao at UNEP-organised SEA of Solutions conference last week.

But habits are proving difficult to change. “Some people still refuse to bring their own containers to the refill stations — they’re so used to the convenience of sachets. We thought we could change their mindset, but the transition has not been easy,” he said.

For years, sachets have been marketed by multinational consumer goods firms such as Unilever, Procter & Gamble and Henkel as a way to sell products to poor communities, but they have created a devastating pollution problem for countries unequipped to process the waste. Sixty billion single-use sachets are consumed annually in the Philippines.

Unilever launched a pilot initiative to recycle plastic sachets in Indonesia in 2017, but it has yet to make it beyond the test stage. The company, and rivals such as Nestlé and Colgate-Palmolive, are now using plastic waste to feed cement kilns as their recycling projects falter, an investigation by Reuters revealed this month.

A dependence on plastic in developing countries has been cultivated by decades of advertising by these companies, which repeatedly sell the convenience and affordability of single-use plastic over traditional forms of dispensing goods. It will take decades of counter-messaging to wean consumers off it, Albao said.

Wrapping rice meals in leaves or other native, biodegradable materials is at least a better solution while the re-use culture takes time to re-establish itself, said Albao. “We are not solving the [single-use plastic pollution] problem right now. But even if 10 per cent of sari-sari stores transition [back] to circular practices, we can have a significant impact.”

Bringing back local customs and materials to phase-out plastic waste is particularly difficult in Southeast Asian cities, where plastic-dependent products and services are built into supermarkets and online shopping deliveries, said Tiza Mafira, co-founder of the Plastic Bag Diet campaign, which has been pushing for a phase-out of plastic bags in Indonesia.

It took nine years of campaigning before legislation was introduced to curb plastic bags, first in the capital Jakarta and Bali then in other cities. Mafira said that public and retailer support is key to plastic reduction legislation working. “If retailers are not prepared to switch to a re-use model, they will simply switch from one single-use material to another,” she said.

That is a problem if the material does not degrade naturally, she said. “Restaurants are claiming that their straws are now made from bioplastic, but they still contain plastic. They are under pressure for quick-fix solutions. We want retailers to think about not giving any straws at all,” she said, adding that more sustainable choices are often not visible enough for consumers.

Language is important too, Albao noted, referring to PRRCFI’s Wala Usik sari-sari campaign to replace single-use sachets with refill options. “Wala Usik means ‘nothing wasted’ in local dialect [in Bacolod]. It is our expression of conservation and the circular economy. It doesn’t sound alien to local communities, who find words like ‘zero waste’ or ‘plastic-free’ boring or intimidating,” he said.

Another obstacle for the circular economy in Southeast Asia is politics. Albao recalled a councillor telling him that he couldn’t ban single-used plastic, because street food vendors would stop voting for him. “Market vendors will be affected by the elimination of single-use materials. We do support that aim, but there has to be equitable transition. The ban on single-use plastic won’t be easy for many sectors. That’s the biggest pain point for the circular economy.”