Read all about it: Rupert Murdoch-owned newspapers The Australian and Courier Mail are printed on paper sourced from a subsidiary of Korindo, the industrial giant that destroyed thousands of hectares of pristine Indonesian forest.

Environmental campaigners have found that The Australian and Courier Mail newspapers in regional Queensland are printed on paper linked to illegal deforestation and human rights abuses in Indonesia.

Aspex is a wholly owned subsidiary of Korean-Indonesian agribusiness conglomerate The Korindo Group, which has businesses ranging from palm oil and paper to construction, to real estate, financial services, and building wind towers.

An investigation by Mighty Earth last year revealed that Korindo’s palm oil arm was burning ecologically precious tracts of forest in Indonesia’s remote Papua province, as well as violating the rights of local indigenous communities by grabbing land without their consent, and destroying their forest livelihoods.

While the company has committed to a moratorium on forest clearing until an independent assessment has identified areas that have a high carbon stock and high conservation value—though it did briefly break this ban in February—it has yet to make progress on implementing more stringent environmental and social impact policies.

Measures that environmentalists are calling for include the institution of a no deforestation policy, restoring forests to compensate for the land they cleared after issuing a moratorium on deforestation, resolving conflicts with communities, and being transparent about its concession boundaries, suppliers, and sustainability practices.

Deborah Lapidus, campaign director, Mighty Earth, told Eco-Business that the investigation was sparked by a reference to Aspex on the website of Australia-based paper products company Oceanic Multitrading; the firm says it imports Aspex newsprint—that is, the cheap paper used to make newspapers—into Australia.

Through further research, trade data analysis and collaboration with a paper supply chain expert, investigators determined that Aspex newsprint was used to produce The Australian and Courier Mail in regional Queensland. News Corp has confirmed that it sources some newsprint from the firm.

Lapidus explained that this was not an active decision by News Corp, but rather a “holdover issue” from the media giant’s acquisition of APN News and Media’s regional Queensland publications last December.

APN had an existing trade relationship with Aspex in the regional Queesland market, which News Corp inherited, Lapidus said. For the rest of its print publications, News Corp sources sustainable newsprint from the Norwegian pulp and paper firm  Norse Skog’s Australian business.

News Corp’s head of environment Tony Wilkins told Mighty Earth and Markets for Change in a letter dated July 19 that “the only paper we procure from Aspex is 100 per cent recycled fibre content newsprint and this is Forest Stewardship Council certified”.

“We plan to discuss the issues you mentioned with Aspex,” Wilkins added. News Corp had not responded to Eco-Business’s queries by publication time.

Lapidus acknowledged that while the Aspex paper itself is not linked to deforestation, the fact that the firm is wholly owned by Korindo is problematic. “It’s just not about the product itself, it’s about the company that they’re doing business with,” she said.

“If News Corp’s ultimate goal in sourcing from Aspex is to enhance environmental responsibility, they are doing the exact opposite by buying from a company that is responsible for such massive deforestation,” Lapidus added.

Peg Putt, chief executive officer, Markets for Change, shared that she estimates that Aspex makes up only about 5 per cent of News Corp’s total paper use.

“It’s a very minor proportion of their newsprint supply, which is why we think it’s not a massive change for the company,” said Putt.

Putt also shared that­­­­­ while it may seem like News Corp can easily source all its print supply from Norse Skog, which is widely recognised as sustainable, the media firm explained in a recent meeting with Markets for Change that it needs to maintain networks with overseas suppliers to manage the risks of a disrupted supply of paper in Australia.

But there is a newsprint company based in the United Kingdom which can provide a cost-competitive and superior option Putt noted, though she declined to name the company.

News Corp has yet to mention a change in suppliers, Putt said she is “optimistic” that there will be a concrete commitment by the end of the month.

To put pressure on News Corp to act, Market for Change produced parody copies of the two publications in question—cheekily renamed Not Australian and Courier Fail—and distributed them outside News Corp offices in Sydney and Brisbane, as well as at major train stations in the two cities on September 1. 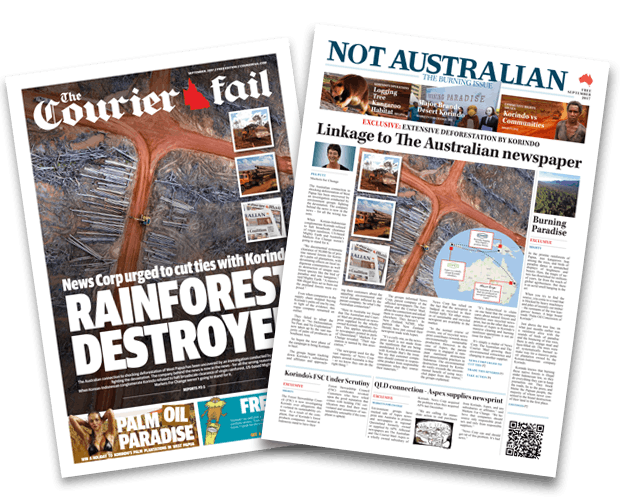 The campaign has received positive feedback—including from the Papuan community in New Zealand—and strong engagement from the public, said Putt.

She added: “We need to put pressure on Korindo from all angles to take the issue of deforestation seriously.”