A new report by the Zoological Society of London has found inconsistencies in how palm oil companies report on land in their concessions, leaving almost a million hectares of land unaccounted for and exposed to the risk of deforestation.

The world’s largest palm oil companies are not properly reporting the total land area they control, leaving almost a million hectares unaccounted for and vulnerable to destruction, a new report by United Kingdom-based conservation charity Zoological Society of London (ZSL) has found.

Titled ‘Hidden Land, Hidden Risks’ and released on Tuesday, the report analysed land-related data that 50 of the world’s largest palm oil companies have made publicly available via annual reports, sustainability reports, or data submitted to the Roundtable on Sustainable Palm Oil, the industry association for responsible palm oil.

Palm oil plantations cover some 27 million hectares of land worldwide, most of it in Indonesia and Malaysia. The 50 firms whose corporate responsibility ZSL evaluates through its Sustainable Palm Oil Transparency Toolkit (SPOTT), together hold 8.6 million ha of land.

In its analysis, ZSL found inconsistencies when tallying company data in how their land was used for purposes including plantations, smallholder farms, conservation areas, and infrastructure. Some 28 companies had inconsistent figures about their land holdings across their sustainability reports, websites, and other communications while 35 of them failed to disclose areas that had not yet been planted with palm oil.

As a result, some 900,000 hectares—an area 12 times the size of Singapore—are unaccounted for, because it is not clear what they are being used for. 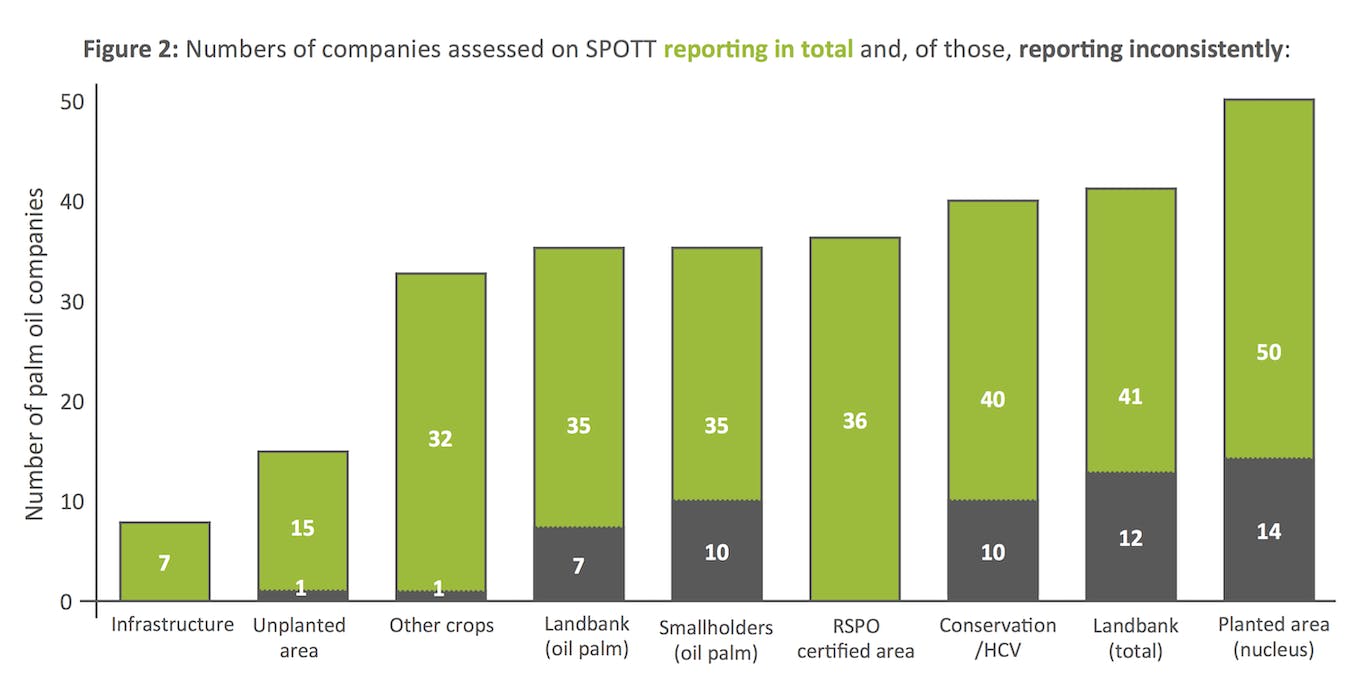 The lack of clarity is a problem because it could allow companies to clear forest with little accountability, destroying important ecosystems and wildlife habitats in the process, said ZSL. It added that for investors who classify land within a concession as an asset or cost depending on how it is used, inadequate data leaves them with an incomplete picture of the risks of investing in palm oil.

“Producers can’t manage what they can’t measure,” she added.

However, some firms fared better than others. There were 12 companies which ZSL said had no “unclear areas”, including Malaysian palm oil giant IOI Group, Indonesia’s Astra Agro Lestari, and Singapore-based First Resources.

At the other end of the spectrum, companies with land banks that were almost entirely unclear included Indian firm KS Oils with 98.7 per cent of its concession areas unaccounted for, and UK-based producer Noble Group, which failed to explain how 62 per cent of its land is used. KS Oils is not an RSPO member, while Noble Group has been a member since 2011.

In total, 39 of the 50 firms that ZSL’s SPOTT tool looks at are RSPO members, and it is mandatory for them to disclose their land holdings as part of their membership obligations. They must do so through yearly reports known as ‘Annual Communications of Progress’, or ACOPs.

But the problem with ACOPs is that they currently do not contain clear guidelines on exactly how companies should account for land used for planting, infrastructure, and conservation, said ZSL.

RSPO is conducting a review of its ACOP process, and ZSL said it hopes that it will integrate standardised definitions for the types of areas in a land bank, so that there are fewer discrepancies in the reporting. It also called on companies to provide regular and consistent reports of the land they manage, so that it is easier to track land use change within concessions.

Palm oil shareholders and investors should also demand that companies improve how they report on land banks to drive transparency in the sector, urged the conservation group.

“We’re working to address this situation by working with companies to understand the discrepancies in their reporting,” said Delabre.

She added: “But there is also a need for certification standards to provide clear definitions and procedures that encourage consistent reporting.”

For its part, RSPO acknowledged the importance of transparency, and said that it was continually trying to improve its ACOP requirements.

Stefano Savi, global outreach and engagement manger, RSPO, told Eco-Business that a review of how to improve the quality of information is submitted has been going on since November 2015.

He added: “As a result of this review, this year’s ACOP provides more clarity on the definition of ‘total land area controlled and managed for palm oil cultivation’”. The term now specifically refers to current and future palm oil plantations, infrastructure, and conservation areas.

Savi urged members to improve the transparency of their reporting, but also noted that many companies in the palm oil sector, as well as other economic sectors have yet to undertake similar reporting exercises.

“We hope organisations like ZSL will continue to help us make this happen,” said Savi.